Valentine’s Day is celebrated all over the world and nothing says Valentine’s Day in America like chocolate. According to the National Confectioners Association, during Valentine’s week, U.S. consumers are expected to ring up $700 million in chocolate candy sales, doubling the normal weekly rate.

Globally, the retail market for chocolate candy1 is valued at an estimated $107 billion and is expected to grow to $143 billion by 2017. Factors contributing to market growth include rising middle class incomes in emerging markets, claims of chocolate’s health benefits, and seasonal sales, particularly around Valentine’s Day and other holidays.

While most global demand is met by local production, global imports have increased steadily, reaching a record $7.7 billion in 2012. The United States was the world’s largest importer of chocolate in 2012, with a total of $1.4 billion, accounting for 18 percent of global imports. The top five chocolate candy importers – the United States, Russia, Canada, the European Union, and Mexico – accounted for a combined 50 percent of global importsin 2012. Russia, the secondlargest importer, saw the largest growth, with imports increasing 35 percent since 2010. 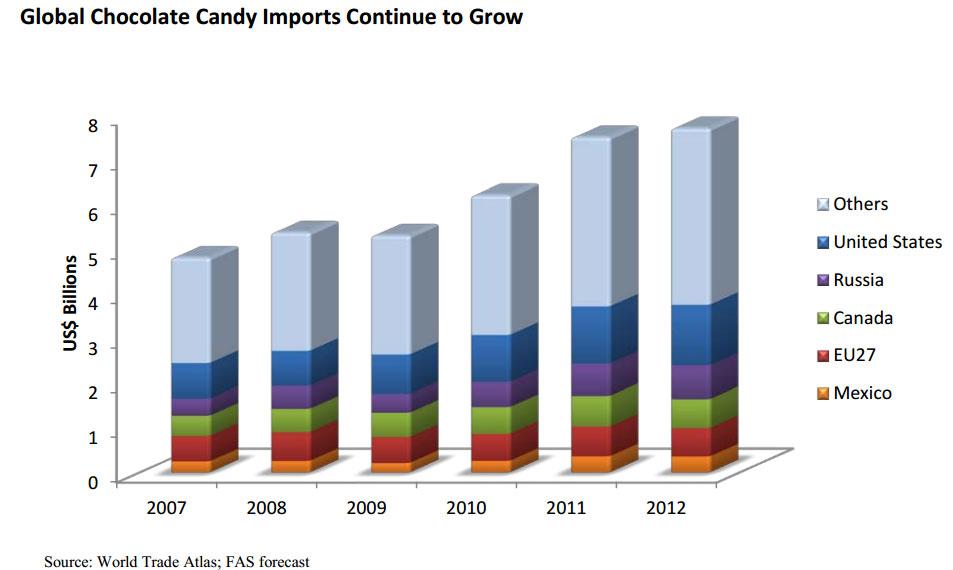 In Canada, three large players, Nestlé, Cadbury, and Hershey’s, control more than 40 percent of the market.Canada is a stable market but consumers there are increasingly interested in highvalue, premium chocolates, according to Euromonitor, creating new growth opportunities. In Mexico, global players such as Nestlé, Ferrero, Hershey, and Effem, control 60 percent of the market, while Grupo Bimbo and Chocolates Turin are the leading domestic manufacturers. Mexico is considered a mature market, but growth is anticipated in seasonally oriented chocolates and chocolates with reduced sugar content. 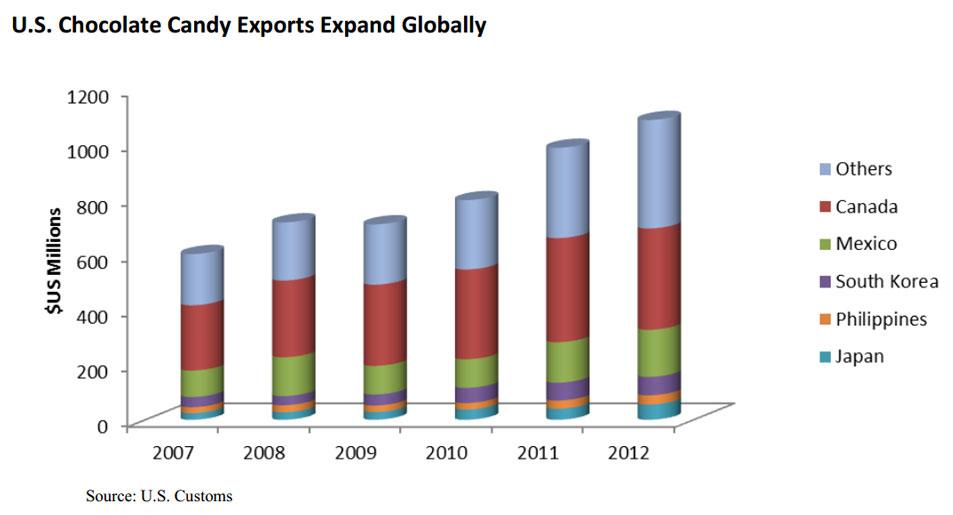 Chocolate candy demand in South Korea and Japan is expected to remain stable, but importers face strong competition from dominant local players such as Lotte and Meiji. The growing popularity of giving chocolate as gifts at holidays, particularly among younger consumers, helps sustain demand. In the Philippines, American and other international manufacturers hold about 80 percent of the chocolate market. U.S. exports face competition from cheaper domestic brands and from other Asian competitors who are increasing exports to the Philippines.

Outside of the top five U.S. export destinations, Australia, Hong Kong and Singapore are the fastest growing markets for U.S. chocolate candy. All three markets registered growth rates of more than 30 percent on a value basis from 2011 to 2012. In Australia’s case, demand for chocolate confectionery was partly spurred by discounting and bulk purchasing promotions by retailers. U.S. chocolate candy exports to Australia have increased from just $5 million in 2007 to more than $28 million in 2012, and the U.S. share of the Australian market has grown from 2 percent to 9 percent.