Central America and the Caribbean: Prospects for U.S. Agricultural Exports

Central America and the Caribbean, with their close geographical and economic ties to the United States, have always been an important market for U.S. agricultural exports. U.S. market share in this region averages more than 40 percent, the highest outside of Canada and Mexico. This report highlights the Dominican Republic-Central America Free Trade Agreement (CAFTA-DR) countries, with a close look at the Dominican Republic, as well as Panama, where the United States entered into a trade promotion agreement in 2012. 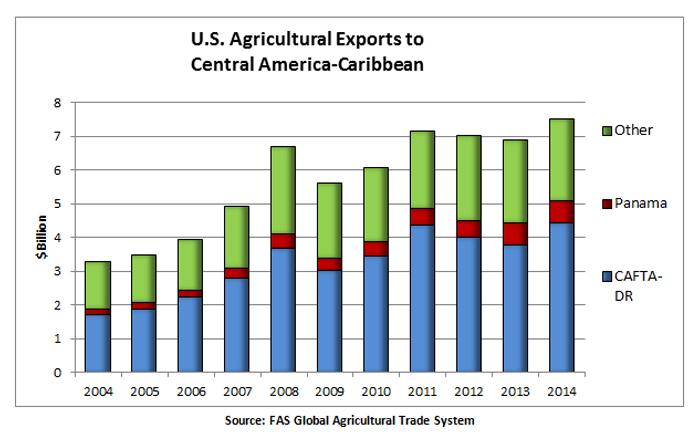 The CAFTA-DR agreement was implemented on a rolling basis between the United States and six Central American and Caribbean trading partners: El Salvador, Guatemala, Honduras, and Nicaragua in 2006; the Dominican Republic in 2007; and Costa Rica in 2009. These six countries have a combined GDP of $317 billion, which is comparable to the GDP of Vietnam. Retail sales of food and beverages are estimated at $45 billion, comparable to the Philippines. CAFTA-DR countries are home to nearly 50 million people, roughly equivalent to the population of South Korea. 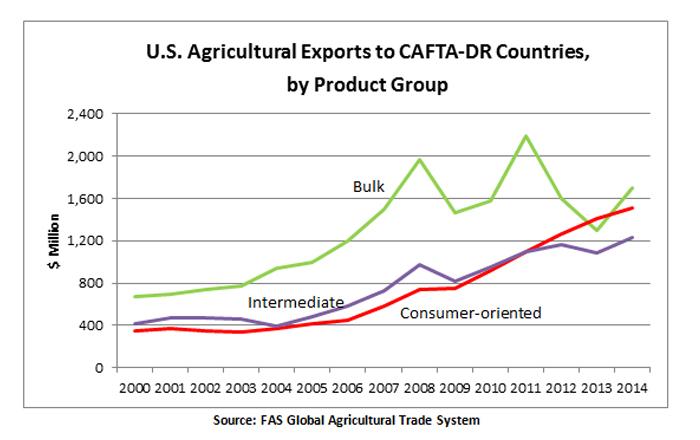 At a combined $4.4 billion, the CAFTA-DR countries rank as the seventh-largest agricultural market for U.S. exports. Bulk commodities such as corn, wheat, and rice have traditionally dominated U.S. shipments; however, their share of total U.S. exports has contracted from over 50 percent a decade ago to just over one third today. The most notable trend in U.S. exports to the CAFTA-DR region is the rapid rise of consumer-oriented products. While the value of bulk shipments vacillated wildly in recent years due to price fluctuations, consumer-oriented products expanded steadily in both value and volume (see above). Led by prepared food, dairy, poultry, and pork products, U.S. exports of consumer-oriented products more than tripled between 2006 and 2014, while total U.S. agricultural exports doubled during the same period. The largest importing countries within the region are the Dominican Republic and Guatemala (see below).

U.S. imports of agricultural products from region are also on the rise, up 72 percent over the last eight years to $5.3 billion in calendar year (CY) 2014. U.S. imports consist primarily of bananas, coffee, sugar, and other fruits, which comprise three-fourths of the total. Guatemala and Costa Rica are the largest suppliers, accounting for two-thirds of U.S. imports from the CAFTA-DR region.

Total bilateral trade between the United States and the CAFTA-DR region has flourished since 2006, rising 83 percent to $9.7 billion last year, making the group the sixth-largest U.S. trade partner in the world, after Canada, Mexico, the European Union, China, and Japan.

According to Global Insight, the CAFTA-DR region’s combined GDP is forecast to grow 21 percent to reach $386 billion by 2019. Total retail food and beverage sales are expected to increase 20 percent during the same period, and middle class households are projected to expand by 24 percent in five years. These factors will further boost food demand and create more trade and investment opportunities for the United States. 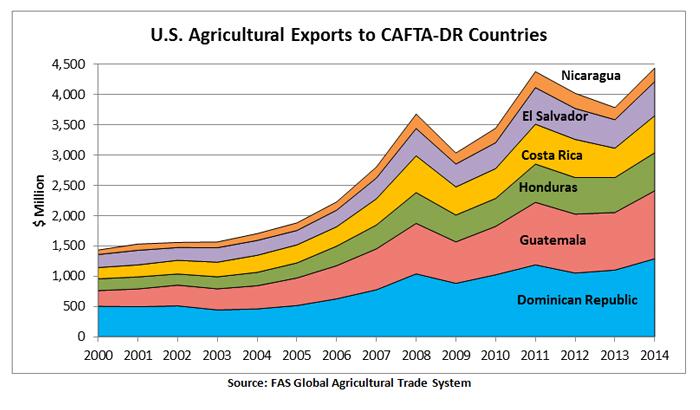 With a population of 10.3 million, the Dominican Republic has the highest per-capita income in the Central America-Caribbean region. The country’s $100-billion economy is dominated by the service sector, which has been driven by growth in telecommunications, tourism, and free trade zones. According to the World Bank, the Dominican Republic’s GDP grew 5.9 percent in 2014 and is forecast to grow an additional 4.9 percent in 2015. Three-quarters of the island nation’s population lives in urban areas. The Dominican Republic has long been viewed as an exporter of sugar, coffee, and tobacco, though agriculture accounts for just six percent of the GDP, and labor shortage is a concern.

The Dominican Republic is the largest market for U.S. agricultural exports in the Central America-Caribbean region. U.S. exports there reached a record $1.3 billion in CY 2014, accounting for 30 percent of total shipments to CAFTA-DR countries. Bulk and intermediate products such as wheat, corn, soybean meal and soybean oil make up almost half of total U.S. exports (see below). However, their share has been slipping, especially since 2007, as exports of consumer-oriented products surged at a pace that’s triple that of the overall exports. 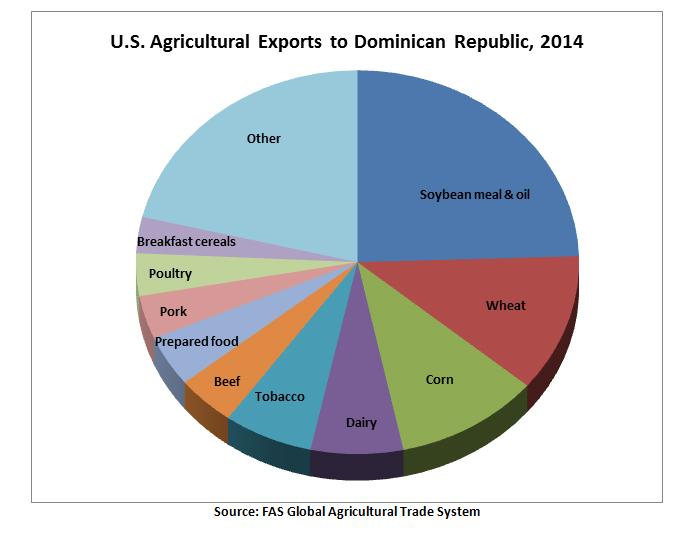 Led by dairy, prepared food, beef, pork, and poultry products, the Dominican Republic’s imports of consumer-oriented products have been growing an average of 18 percent annually since the implementation of the CAFTA-DR agreement in 2007. Foreign Agricultural Service officials in Santo Domingo report that the CAFTA-DR agreement has established a more transparent process for trade and helped expand imports of high-value products, including red meat, poultry, and cheese, that had previously faced restrictions. U.S. imports from the Dominican Republic totaled $371 million in CY 2014. Major imports include cocoa beans, sugar, and fresh vegetables.

According to FAS officials in Santo Domingo, approximately 80 percent of U.S. high-value products are distributed through the growing retail sector, while the hotel, restaurant, and institutional (HRI) sector absorbs the remaining 20 percent. The Dominican Republic is one of the top tourist destinations in the Caribbean with a booming HRI sector, which helps boost demand for high-value U.S. food products. More than 40 percent of the population is comprised of middle and upper income consumers who prefer U.S. products because of their quality and reliability. U.S. products are increasingly affordable even for lower income Dominicans, thanks to economic growth and implementation of CAFTA-DR. 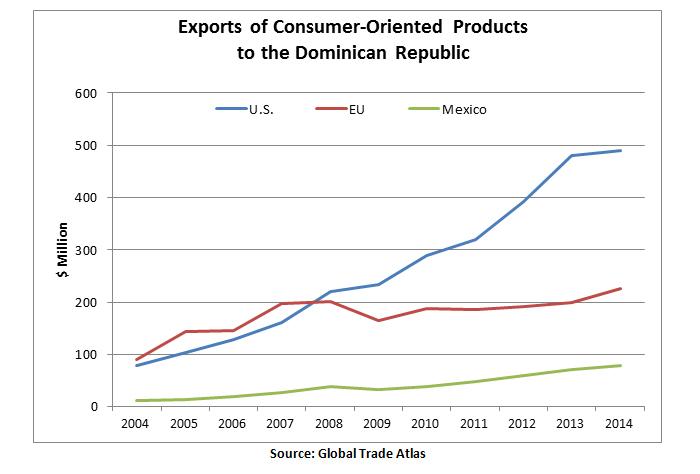 The United States is the largest supplier to the Dominican Republic, with a market share of 58 percent. Other major exporters to the country are the European Union (13-percent market share) and Mexico (5 percent), which both supply mainly consumer-oriented products. Following implementation of the CAFTA-DR agreement, U.S. exports of high-value products grew dramatically compared to the competition (see above). As an upper-middle-income country with vibrant and expanding retail and HRI sectors, the Dominican Republic presents expanding opportunities for exports of high-value products from the United States (see FAS Dominican Republic Exporter Guide).

With Panama’s strategic location, the country’s dollarized economy has been driven primarily by a well-developed service sector, which accounts for almost 80 percent of GDP. Panama leads the region economic growth. GDP growth has averaged more than 8 percent over the past 10 ten years and is forecast at 6.1 percent in 2015. The Panama Canal expansion project, which is expected to be completed by 2016, will more than double the canal’s capacity and further boost economic growth. Similar to the Dominican Republic, three-quarters of Panama’s population lives in urban areas, primarily Panama City. Agriculture accounts for less than four percent of GDP, with primary outputs including seafood, bananas, tropical fruits, rice, corn, coffee, and sugarcane.

Panama is the third-largest U.S. agricultural market in the Central America-Caribbean region, after the Dominican Republic and Guatemala. U.S. exports there reached a record $654 million in CY 2014 and are diversifying rapidly, mirroring similar development in the CAFTA-DR region. While traditional bulk products such as corn, soybean meal, and wheat are still among the leading U.S. exports to Panama, overall U.S. shipments are dominated by high-value, consumer-oriented products, which now account for almost 60 percent of the total (see below). The most prominent consumer-oriented products are dairy, prepared food, chocolate and cocoa products, wine and beer, pork, poultry, and snack food. In particular, dairy products (mostly cheese) expanded rapidly at an average annual rate of 35 percent over the past ten years, pork and product exports averaged 30 percent per year, and wine and beer sales grew 25 percent annually during the same period. 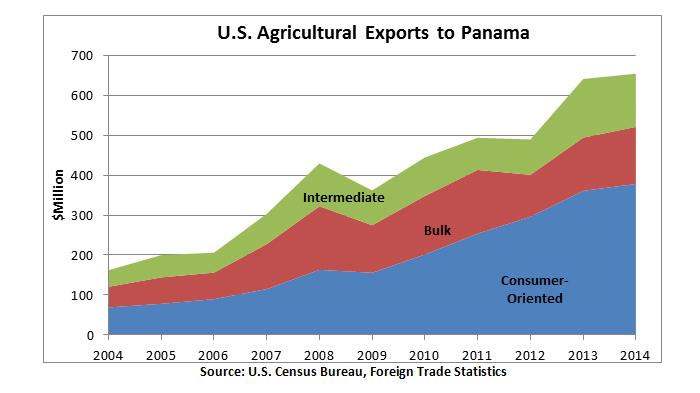 According to FAS officials in Panama City, demand for high-value and processed food products has been driven by the burgeoning tourist industry and by immigration. Panama is the home port for several cruise companies, and tourism plays an important role to the local economy. Favorable laws and the creation of industrial parks have enticed international companies to establish headquarters or regional hubs in Panama. The canal expansion project is estimated to have created more than 30,000 jobs, and attractive benefits for retirees have boosted immigration from the United States, Canada, and Europe, as well as neighboring Venezuela and Colombia. The influx of visitors will continue to drive up demand for high quality, Western style food. (For more information, see FAS Panama Food Service-HRI Report.)

The United States is the largest supplier to Panama, with a market share of 45 percent. Other major suppliers include the European Union (11 percent) and Costa Rica (10 percent). Thanks to the United States-Panama Trade Promotion Agreement that entered into force in October 2012, nearly 56 percent of U.S. agricultural exports immediately became duty-free, with most remaining tariffs phased out over 15 years. Panama eliminated duties on high-quality beef, frozen turkeys, soybeans, soybean meal, crude soybean and corn oils, almost all fruit and fruit products, wheat, peanuts, whey, cotton, and many processed products. This trade agreement will help the United States maintain its competitiveness against other exporters.