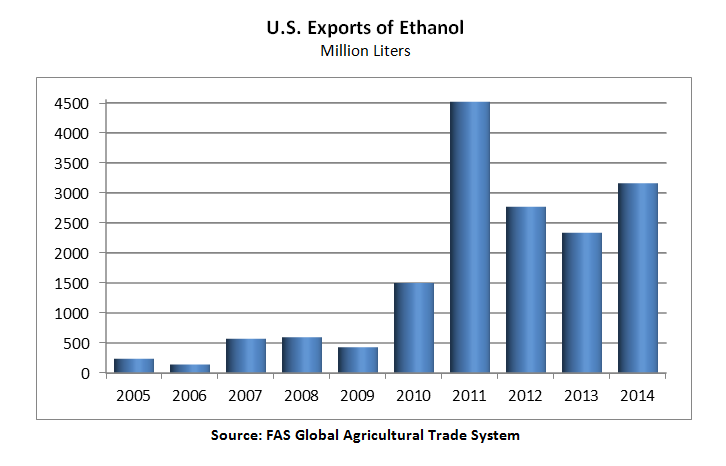 After 2010, U.S. ethanol production stagnated due to the approaching 10-percent “blend wall” (an upper limit on the amount of ethanol that can be blended in motor fuel for conventional vehicles, constraining the widespread use of 15-percent, or E-15, and 85-percent, or E-85, blends), and rising price of corn, which is by far the largest feedstock for U.S. ethanol. However, in 2014 ethanol production jumped nearly eight percent, reaching a record 54 billion liters (14.3 billion gallons). Among the driving forces behind the upturn were lower corn prices and a recovery in gasoline consumption following the 2008-2012 decline due to the recession and rising oil prices. Record U.S. corn crops in 2013 and 2014 caused a sharp drop in prices, with the farm-gate value in mid-2014 registering about 40 percent lower than the same time the previous year. U.S. ethanol imports (including both fuel and non-fuel ethanol) dropped by more than half in 2014, to less than 900 million liters, the lowest level since. 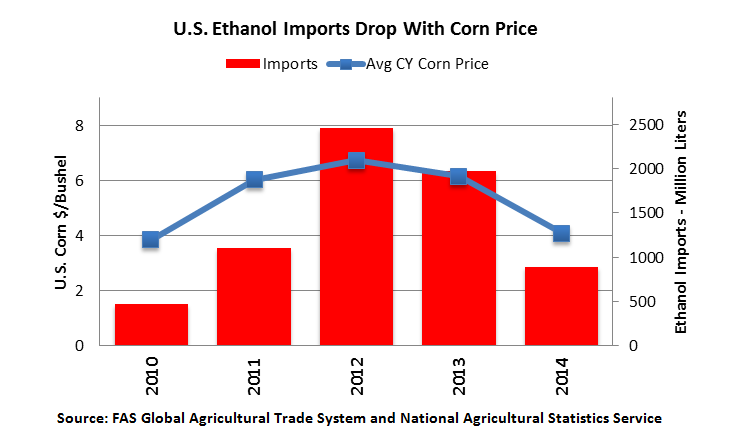 With growth in domestic ethanol consumption constrained by the blend wall and projected reductions in U.S. gasoline consumption in the next decade, refiners and traders are increasingly looking to export markets. In 2014, U.S. ethanol exports reached the second-highest level in history, and approximately six percent of domestically produced ethanol was exported. Net exports were valued at $1.3 billion, the highest in the world. Most of the ethanol exported from the United States is sold and shipped by traders, but some ethanol companies also export directly to foreign buyers.

The United States and Brazil dominate the global market, accounting for three-quarters of world ethanol trade. While Brazil has traditionally been the largest exporter of ethanol, in 2014 Brazil’s exports fell sharply, from 2.9 billion liters to only 1.4 billion. The United States took over the top spot, shipping more than twice as much as Brazil, and accounting for about half of the six-billion-liter global ethanol market. Brazilian ethanol is produced from sugarcane and production depends on the economics of sugar prices. The primary reason for the fall in Brazilian exports was a lower sugar cane harvest in Brazil, coupled with reduced import demand from the United States, which typically accounts for 60 percent of Brazil’s exports. Another factor, which is likely to impact Brazil’s exports in the future, is growth in domestic consumption of ethanol. The Brazilian government recently raised the blend mandate in Brazil from 25 to 27 percent, which should boost domestic use. 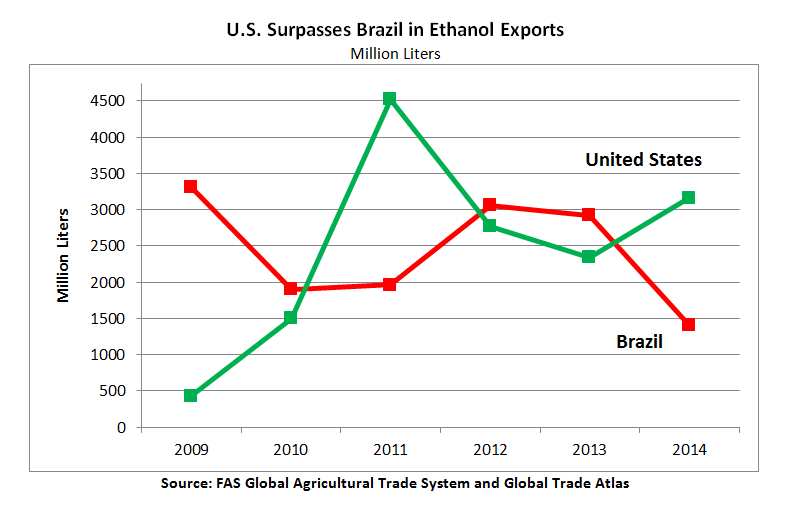 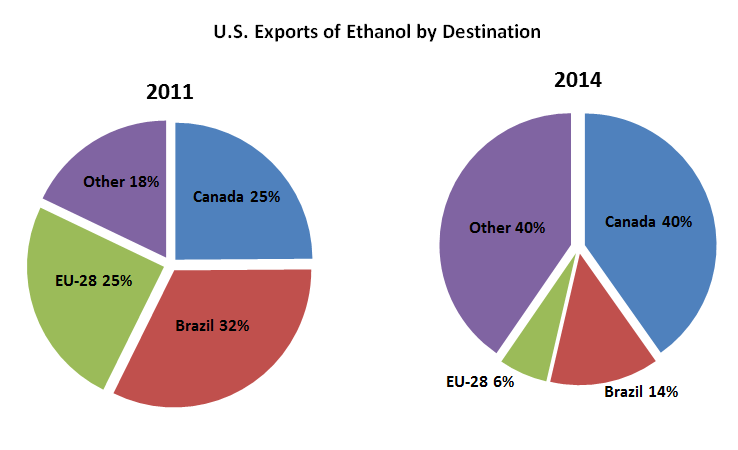 Canada: Canada has been the largest and most dependable market for U.S. ethanol exports, accounting for more than 40 percent of total exports. U.S. exports to Canada have increased every year for the past five years. Canada surpassed the United States as the largest ethanol importer in 2014. Canada has a national blend mandate of five percent, but statistics suggest that the actual blend rate has exceeded that due to discretionary blending as well as the fact that some provinces have higher mandates than the national level.

Brazil: Exports to Brazil, the world’s second-largest ethanol producer, doubled this past year, making Brazil the number two market for the United States. However, U.S. ethanol exports to Brazil were far below the levels of 2011 and 2012 when high sugar prices discouraged domestic Brazilian ethanol production and encouraged imports.

EU-28: The European Union had been a major importer of U.S. ethanol, accounting for about a quarter of all U.S. exports between 2010 and 2012. However, anti-dumping duties were put in place in 2013, and since then U.S. exports have dropped sharply. In 2014, shipments to the EU made up only six percent of U.S. exports. The EU now relies on imports from other countries including Guatemala, Pakistan and Peru.

Other Markets: The strongest growth in U.S. exports in 2014 was to the United Arab Emirates, the Philippines, and India – the third-, fourth-, and sixth-largest markets, respectively. The United Arab Emirates is largely a discretionary blending market, with imports driven by the relative price of ethanol and gasoline rather than an established blend mandate. The Philippines has a 10 percent blend mandate, but domestic ethanol production (using sugar cane and molasses as feedstocks) has been unable to meet this requirement, necessitating imports. India has a five percent blend mandate but the target has not been met due to insufficient fuel ethanol supplies. 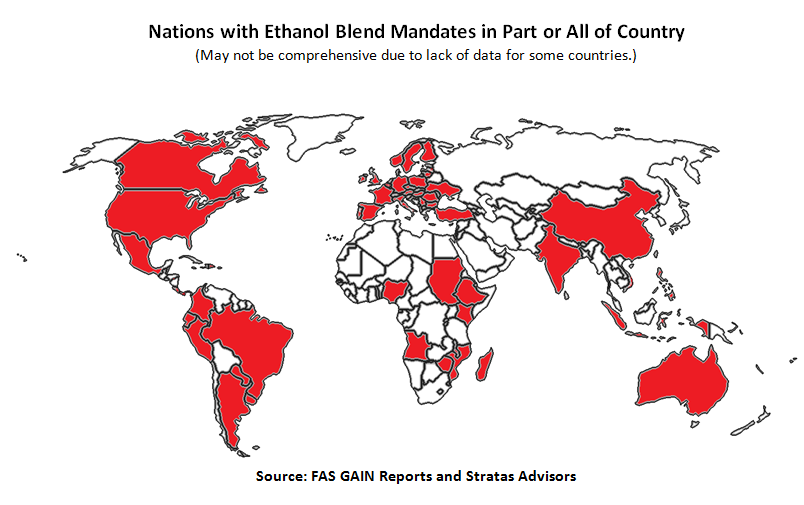 Economic conditions in Bangladesh have created significant opportunities for U.S. agricultural exports, particularly consumer-oriented commodities including tree nuts, condiments and sauces, fruit juice and non-alcoholic beverages, snacks, and baking ingredients. Bangladesh has maintained one of the fastest growing economies in the world for the past decade. The increasing population and rising percentage of middle- and high-income households create a growing potential market for U.S. agricultural products.
International Agricultural Trade Report