Spotlight on Guatemala as Trade Flourishes Under CAFTA-DR

Since the United States entered into the CAFTA-DR trade agreement, U.S. agricultural exports to the six CAFTA-DR countries (Costa Rica, the Dominican Republic, El Salvador, Guatemala, Honduras and Nicaragua) have more than doubled. From 2005-2015, U.S. exports of agricultural goods to the region grew from $1.9 billion to $4.2 billion, with exports to Guatemala growing faster than to any other country. The agreement has strengthened U.S. ties with the CAFTA-DR region and helped spur economic growth, trade, employment and expansion of the region’s middle class. Of the United States’ 14 free trade agreements, CAFTA-DR ranks third in terms of the value of agricultural trade, after the North American Free Trade Agreement (NAFTA) and the U.S.-Korea Free Trade Agreement (KORUS). 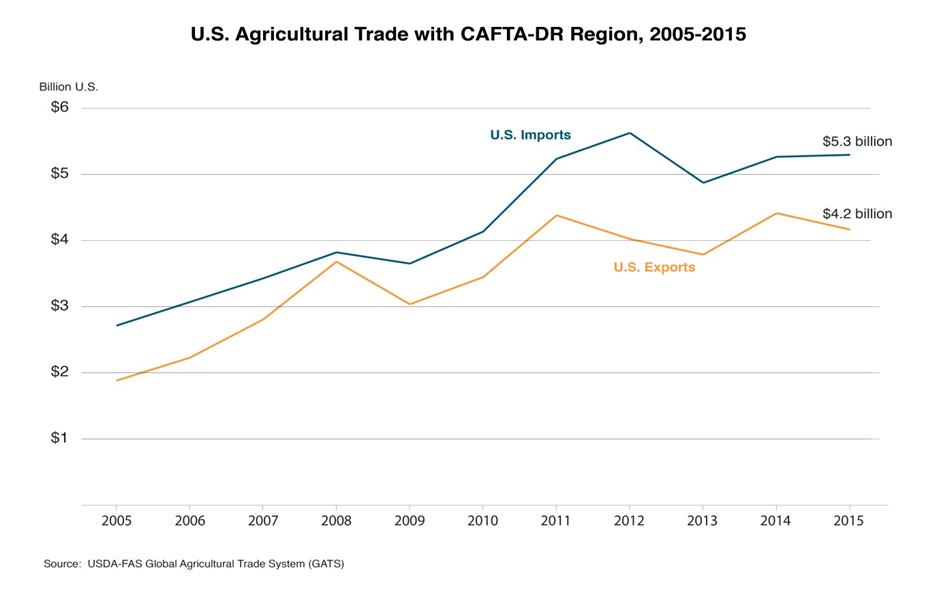 CAFTA-DR was implemented on a variable timeline with El Salvador, Guatemala, Honduras and Nicaragua beginning implementation in 2006, the Dominican Republic in 2007 and Costa Rica in early 2009. The agreement provided immediate duty-free access for various agricultural goods while phasing in tariff reductions for others. The United States ranks as the top supplier of agricultural goods to the region with a 57-percent market share, followed by Mexico with 14 percent, Chile with 3 percent, and Brazil and Canada each with 2 percent. 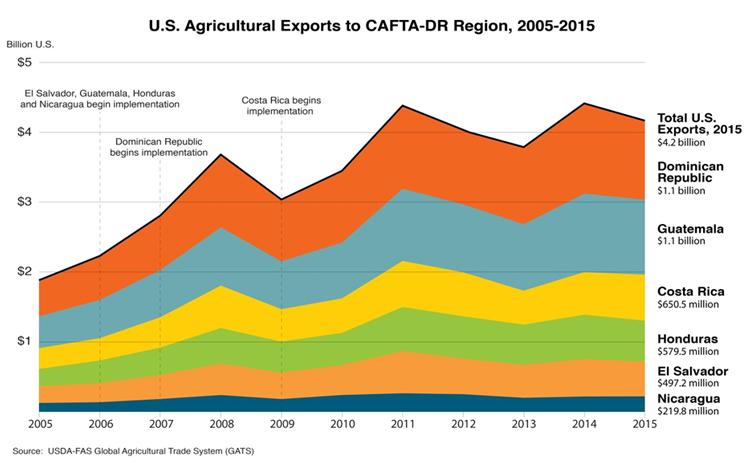 Soybean meal, corn, wheat, poultry meat and prepared foods rank among the top imports by CAFTA-DR countries. Since 2005, U.S. exports of consumer-oriented goods to the region have increased by 270 percent to $1.5 billion. Combined, bulk and intermediate product exports were valued at roughly $2.6 billion in 2015. While bulk commodities were the leading exports on a value basis between 2005 and 2015, consumer-oriented items experienced the largest growth. Since 2005, volumes of high-value items such as pork and beef cuts, tree nuts, processed vegetables and alcoholic beverages increased from 100-300 percent.

Bilateral trade under CAFTA-DR has helped spur economic development in the Central American region. According to Global Insight, the region’s workforce is expected to expand from 24 million to 30 million workers by 2025 and GDP is estimated to increase nearly 50 percent, from $381 billion in 2015 to $563 billion by 2025. The steady rise of the middle class – from 3.3 million households in 2005, to an estimated 4.7 million in 2015, to a forecasted 7 million in 2025 – continues to enhance the demand for retail food and beverage products. The region’s retail food and beverage sales are projected to grow 64 percent by 2025.

Guatemala is the largest Central American market for U.S. agricultural exports and, since implementation of CAFTA-DR, has been the fastest-growing. The United States is the top supplier of agricultural products to Guatemala, with exports growing 135 percent since 2005. U.S. bilateral agricultural trade with Guatemala was valued at approximately $3 billion in 2015, with the United States importing $1.9 billion and exporting $1.1 billion. Top U.S. exports include corn, soybean meal, wheat, poultry meat and cotton. Top imports from Guatemala include bananas, coffee, fresh and processed fruit, fresh vegetables and cane sugar.

Guatemala has a population of 16.5 million, as well as the largest middle class in Central America. Through 2025, the population is estimated to grow 1.8 percent annually. The country continues to experience a vast rural to urban migration, with the urban population increasing from 5.6 million in 2005 to 8.4 million in 2015. In 2015, the country’s urban population exceeded the rural population, according to Global Insight.

Guatemala’s GDP is growing along with its population, climbing more than 4 percent annually to reach $131.9 billion in 2015. This growth is spurring increased demand for high-valued food and beverages. Since 2005, retail food and beverage sales increased by $4.5 billion and are forecast to increase by another 45 percent to $21.6 billion in 2025. Guatemalan employment numbers have also been on the rise, increasing from 4.6 million workers in 2005 to 6.4 million in 2015. During this same time period, unemployment rates dropped by 5 percent.

In 2015, Guatemala’s total trade of agricultural goods with the world was $7.5 billion.  Guatemala imported $2.7 billion in agricultural goods, with the United States as the largest supplier at 44 percent, followed by Mexico with 14 percent, El Salvador with 9 percent, Costa Rica with 8 percent and Nicaragua with 4 percent. Guatemalan exports to the world were valued at approximately $4.8 billion and included cane sugar, bananas, coffee, palm oil and cardamom. With agriculture comprising more than13 percent of GDP and 31 percent of the workforce, Guatemala holds a $2.1 billion surplus in agricultural trade. Guatemala is a consumer and importer of corn, food preparations, soybean oilcake, wheat and various cuts of chicken.

Guatemala’s tariffs on soybean meal were eliminated in the first year of CAFTA-DR implementation, while duties on wheat and cotton were locked in at zero. Improved market access for yellow and white corn was provided through expanding tariff-rate quotas (TRQs), with in-quota duties locked at zero. Out-of-quota duties for yellow corn were phased out over 10 years, reaching zero in 2015. While over-quota duties for white corn were maintained, the TRQ continues to expand in perpetuity. Tariffs on many cuts of chicken were phased out in 10 years or less. An expanding TRQ for chicken leg quarters was established with an in-quota duty of zero and the over-quota duty phased out over 18 years (by 2023). 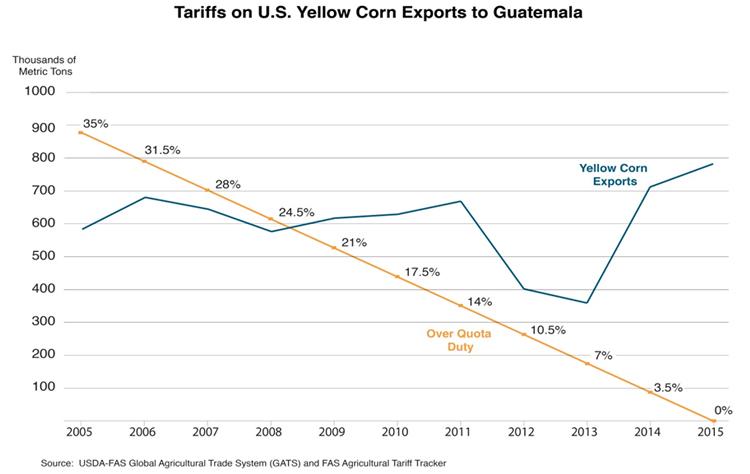 CAFTA-DR has helped spur the Guatemalan economy and contribute to increased personal incomes and living standards. Technological advances and a growing middle class further encourage the demand for higher-value and quality food and beverages. All these factors make Guatemala and the rest of the CAFTA-DR region a growing market for U.S. agricultural exports.

Opportunities for U.S. Agricultural Exports to the UAE

The United Arab Emirates (UAE) is home to 9.8 million people. It ranks among the world’s richest in terms of per capita wealth. According to the International Monetary Fund in 2020, the UAE had a gross domestic product (GDP) of $421 billion, and a per capita spending level in line with that of developed economies, $35,000.
International Agricultural Trade Report

The Netherlands and Scandinavian countries (Iceland, Norway, Sweden, Finland, and Denmark) are key markets for U.S. craft beer and distilled spirits. In 2020, the United States shipped $26 million of beer products and $66 million of distilled spirits to the Netherlands and Scandinavian countries.
International Agricultural Trade Report

USDA estimates and forecasts for cotton supply and demand are on an August-July marketing year (MY) for all countries, while estimates published by many governmental or private groups in other countries are based on local MYs. The local MY for India is October-September.