There is an array of opportunities for U.S. agricultural exporters in Japan, though its unique culture and regulatory environment present challenges. While Japan has a declining population, it remains a wealthy country of nearly 127 million people and is ranked as the 11th most populous country in the world. Japan is the world’s third largest economy, with a per capita gross domestic product (GDP)i of $41,200 in 2017. Demographic trends indicate that by 2021, 98 percent of the population will reside in urban areas where people are more likely to shop at modern retail stores where imported consumer foods are sold. Japan is the world’s 4th largest importer of agricultural goods and ran a $47 billion trade deficit with the world in 2017, including a $12 billion agricultural trade deficit with the United States.ii

Japan’s agricultural sector is relatively small and slowly contracting. According to the CIA World Factbook, agriculture accounted for an estimated one percent of Japan’s GDP in 2017, and employed 2.9 percent of the Japanese labor force. The sector’s efficiency is limited by the small and scattered nature of Japanese farmlands and high input costs, leaving the country dependent on imported agricultural goods and food ingredients for a significant percentage of its food consumption.

The Japanese market is highly competitive and consumers will seek value and low cost, especially for bulk commodities or ingredients. Consumers, however, may be willing to accept high prices for some retail products if they offer good quality or convenience. Traditional menus and tastes still generally guide the average Japanese consumer’s consumption, but Western and other Asian ethnic cuisines are increasingly influencing the market. Japanese consumers are generally health-conscious, with the food and beverage market continuing to focus on healthy and nutritious products. Anything perceived as providing benefits for health or convenience has a stronger appeal and greater chance of becoming popular, including American healthy food trends. Although there is a tendency to prefer domestically produced food products over imported food products, major retail chains in Japan are coping with demand for health foods by introducing imported goods under their own private labels, thus creating new opportunities for U.S. exporters.

Japan ranked as the fourth largest global agricultural importer in 2017, reaching $51.9 billion. Despite overall import declines between 2013 (57.6 billion) to 2016 (48.9 billion), U.S. exports values remained consistently above $11 billion. According to Japanese Ministry of Finance data, Japan’s top agricultural imports from the world are pork and pork products, beef and beef products, poultry meat and products, processed vegetables, and corn. The United States is the top supplier of agricultural products to Japan, with a 25 percent market share in 2017. The EU and China are the second and third largest suppliers with 13 percent and 12 percent market shares, respectively, followed by Australia and Thailand with 8 percent market shares. U.S. market share for key exports include pork and pork products (31 percent), beef and beef products (48 percent), and corn (70 percent). 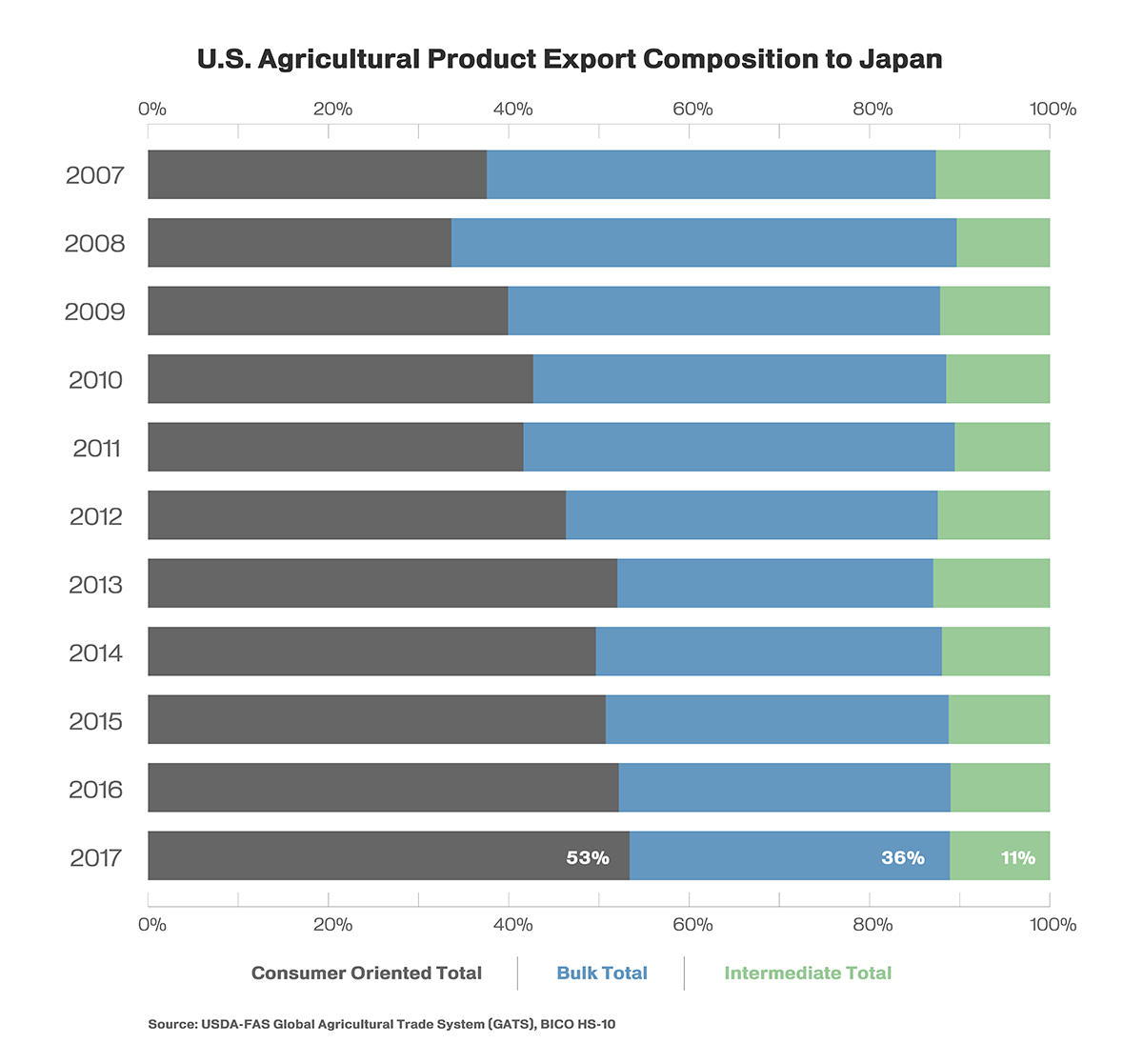 Corn: Japan is the second largest export market for U.S. corn in the world. Given the absence of significant corn production in Japan, imports are projected to remain strong. In 2017, the United States exported nearly $2.2 billion of corn to Japan, approximately 24 percent of total U.S. corn exports to the world by value. The top U.S. competitor in the Japanese market is Brazil.

Pork and Pork Products: In 2017, Japan ranked as the largest global importer of pork and pork products. Japanese pork imports from the world grew 6 percent, from $4.9 billion in 2016 to $5.2 billion in 2017. Japan’s top imported pork products are frozen pork and fresh/chilled pork. For over a decade, the United States was the top pork supplier to Japan. In 2017, however, the EU matched U.S. market share at 33 percent market share, followed by Canada (21 percent), and Mexico (8 percent) and Chile (2 percent). Japan is highly protective of its pork industry and has excluded pork completely or included only provided minor tariff reductions and small tariff-rate quotas in previous bilateral trade agreements. However, the Japan-EU agreement marks a change with Japan eliminating tariffs on more than 60 percent of its pork and pork product tariff lines within 12 years. For more information, please see IATR: Japan-EU Trade Agreement Threatens U.S. Pork Exports to Japan.

Soybean: In recent years, Japan has adopted program incentives to increase the domestic production of soybeans. As a result of these increased incentives, higher domestic production is expected to reduce the demand for imported beans for food use. However, the demand for soybeans for crushing should remain strong. With a 63 percent market share, the United States is the largest soybean supplier to Japan with exports totaling $976 million in 2017. Brazil, Japan’s second largest soybean supplier, holds a 14 percent market share.

Bio-Ethanol:  Following a two year-long analysis of U.S. ethanol’s carbon intensity, in 2018 Japan adopted a standard that opens the door to 366 million liters (nearly 100 million gallons) of U.S. corn-based bio-ethanol (estimated value $170 million per year). Japan requires 824 million liters of ethanol annually to be blended as a fuel oxygenate in its gasoline supply. Until this revision, Brazilian sugarcane-based ethanol had been the only source of ethanol that met Japan’s requirements for low carbon fuel.

Despite being a primary net importer of agricultural products, Japan maintains high tariffs, restrictive and complex safeguards, and technical barriers to trade. Additionally, the United States will face challenges in the Japanese market as U.S. competitors are gaining preferential access for several key commodities. Japan and Australia have a trade deal which lowers tariffs on imports of key products from Australia, while Japan and the EU have concluded a free trade agreement which will take effect in 2019. Additionally, the Comprehensive and Progressive Agreement for Trans Pacific Partnership (CPTPP) threatens to cut into U.S. market share and depress profits for U.S. agricultural exporters by granting preferential access to Canada, Mexico, New Zealand and other international competitors. Canada is expected to gain preferential access to Japanese wheat and pork markets, while New Zealand will receive improved dairy access to Japan through partial tariff reductions and duty-free quotas. Mexico is also expected to enjoy tariff eliminations on fresh fruit to the Japanese market. Despite the increased competition Japan remains dependent on imports and has a historical preference for many U.S. products due to high quality, timely deliveries, and brand recognition. U.S. suppliers may have to work harder, but Japan is expected to remain a top five U.S. market destination for many years to come.