According to the World Bank, Japan has the third-largest economy in the world with a gross domestic product (GDP) of $5.1 trillion. Population data show that 91.7 percent of the population live in urban areas where most economic activity occurs. In 2020, the global COVID-19 pandemic has hit Japan hard with an economic recession and a 5.3-percent decrease in GDP based on the International Monetary Fund (IMF) forecast. Particularly, consumer spending has declined substantially.

Nevertheless, these economic contractions have had a relatively minor impact on Japanese imports of goods and services and on household consumption of non-durable goods. From an agricultural product standpoint, this situation is most likely due to the fact that Japan relies heavily on imports of food products to satisfy domestic demand. An annual report from Japan’s Ministry of Agriculture, Forestry and Fisheries (MAFF) indicates that Japan’s food self-sufficiency ratio, on a caloric basis, was 38 percent in 2017, suggesting that more than 60 percent of Japan’s caloric intake comes from imports. Further supporting the importance of agricultural imports, trade data show that Japan imported $35.2 billion of agricultural goods from January-August 2020, a 2.6-percent decrease from 2019. Considering the economic shockwaves and trade disruptions due to COVID-19, agricultural imports have remained stable.

The Japanese agricultural import market covers the full spectrum of food and beverage products. Japan is a high-income country with a domestic population of 126.3 million people. According to household data from IHS Markit, 94.6 percent of Japanese households, approximately 52.3 million households, have incomes higher than $20,000 at purchasing power parity1, fourth highest in the world after India, China, and the United States. These factors contribute to a market where consumers have multiple options to meet their food needs, from restaurants, to supermarkets and convenience stores, to online ordering. Consumers continue to seek out high-quality food, putting emphasis on convenience and accessibility, including ready-to-eat meals and packaged foods.

Demographic forces help shape consumer trends in Japan. According to the World Bank, the country’s population has been declining since 2010. In addition, Japan is an aging society, with more than 28.0 percent of the population aged 65 or older, the highest percentage in the world. 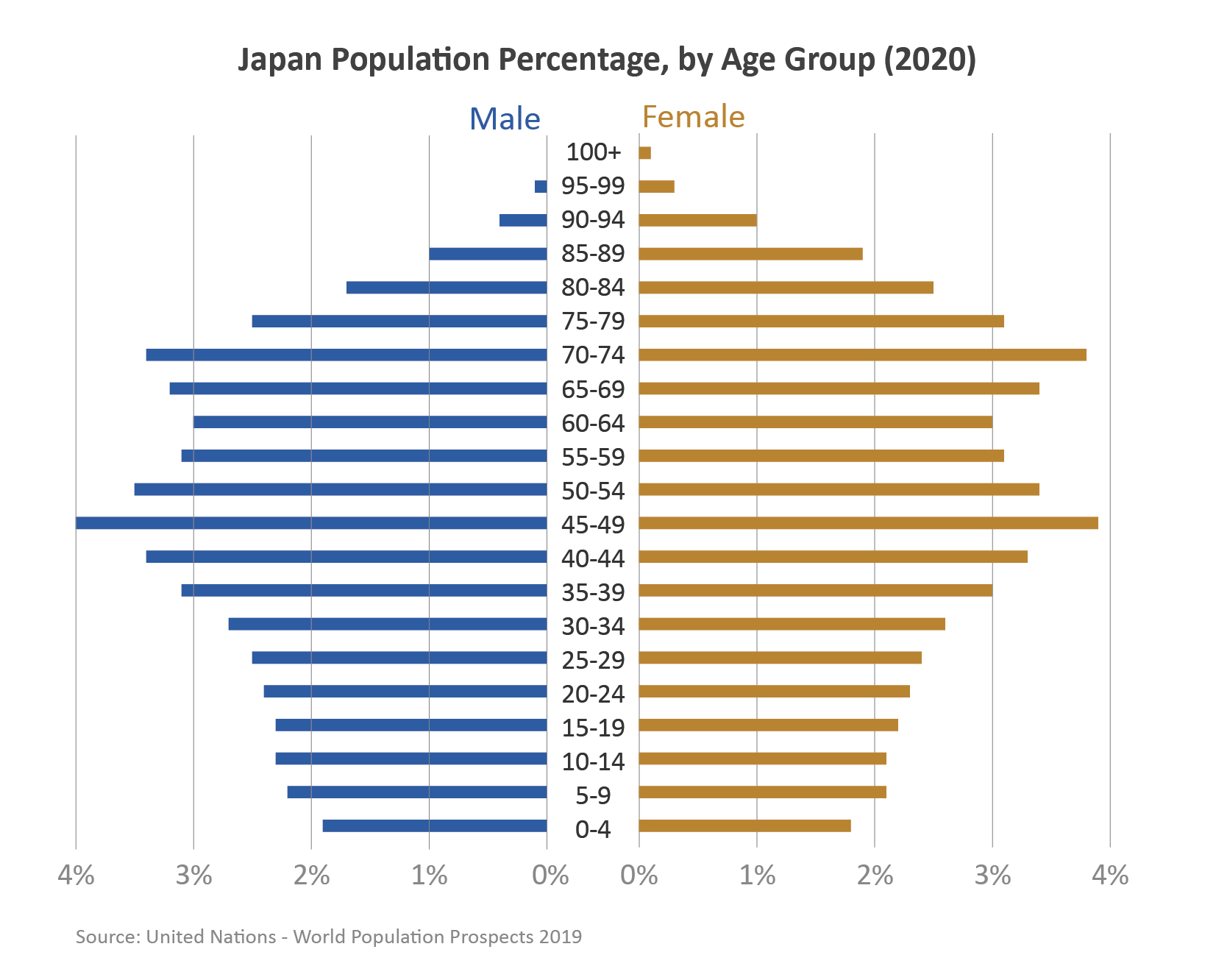 According to Euromonitor, Japanese households spent $420.6 billion on food and non-alcoholic beverages last year, with $199.8 billion (around 47.5 percent) of the expenditure coming from households with household head aged 60 and older. While Japan’s cost of living is generally high, income and consumption data indicate that older Japanese are willing to pay more for higher quality, nutritious foods. Based on these factors, marketing food products that are perceived to meet various health and dietary needs, is promising for the foreseeable future.

According to the Foreign Agricultural Service (FAS) Agricultural Trade Office in Tokyo, Japan is the third-largest health-related food market in the world, estimated at $13.3 billion in 2019. For the purposes of this report, health foods include fresh and processed fruits, vegetables, tree nuts, juices and dairy products. These products are in demand by Japan’s older, health-conscious population.

Tree Nuts: In 2019, Japan imported $782.5 million of tree nuts, and the United States has a market share of more than 50 percent. Specifically, the United States is almost the sole supplier of walnuts and almonds. With their image as “guilt-free” snacks, tree nuts are used in healthy baked goods as well as in mixed snack foods, where they are combined with other products such as dried fruits and chocolate products promising.

Fresh Fruit: As Japan’s domestic fruit production decreases, there are opportunities for U.S. exporters to supply high-quality fresh fruit to Japanese customers. U.S. market share in recent years has declined due to increased competition from signatories of the Comprehensive and Progressive Agreement for Trans-Pacific Partnership (CPTPP), especially New Zealand and Mexico. However, the United States-Japan Trade Agreement (USJTA) went into force in 2020, and products such as raspberries, kiwi, and cranberries now enter Japan duty-free. Export potential for fresh oranges and cherries, which enjoy the same preferential tariff rates as other competitors, remains strong as the United States is the primary supplier for both fruits.

Cheese: According to Euromonitor, Japanese media coverage of the health benefits of cheese has had a positive impact on sales and the healthy image of cheese products has piqued consumer awareness, especially among the elderly. The European Union-Japan Economic Partnership Agreement (EPA) allows some EU cheese products to employ geographical indications (GI), giving them a marketing advantage for product differentiation. Other than GIs, however, most U.S. cheese products enjoy the same preferential tariff rates as competitors as well as a U.S.-specific quota for processed cheese. Most U.S. cheese products will enter Japan duty-free in 2033.

Non-Alcoholic Beverages: With the rise in consumer health-consciousness, the non-alcoholic beverage market is expanding for drinks containing natural ingredients and/or less artificial sweeteners. At the same time, functional/fortified drinks, such as energy drinks and protein drinks, attract consumers focused on fitness and health. Top export opportunities include beverages such as tomato juice, tea-based beverages, and protein drinks.

United States-Japan Trade Agreement and Health Foods
During the last five years, Japan signed significant trade agreements with major competitors, weakening U.S. market share to the lowest point in the past 20 years. The CPTPP entered into force in 2018 and the EU-Japan EPA in 2019. However, the USJTA, which entered into force January 1, 2020, allows U.S. exporters to access Japan’s market under the same terms as major competitors as far as tariff advantage and country-specific quotas According to FAS calculations, the USJTA will allow nearly 90 percent of U.S. agricultural exports to enter Japan either duty-free or with preferential tariffs. 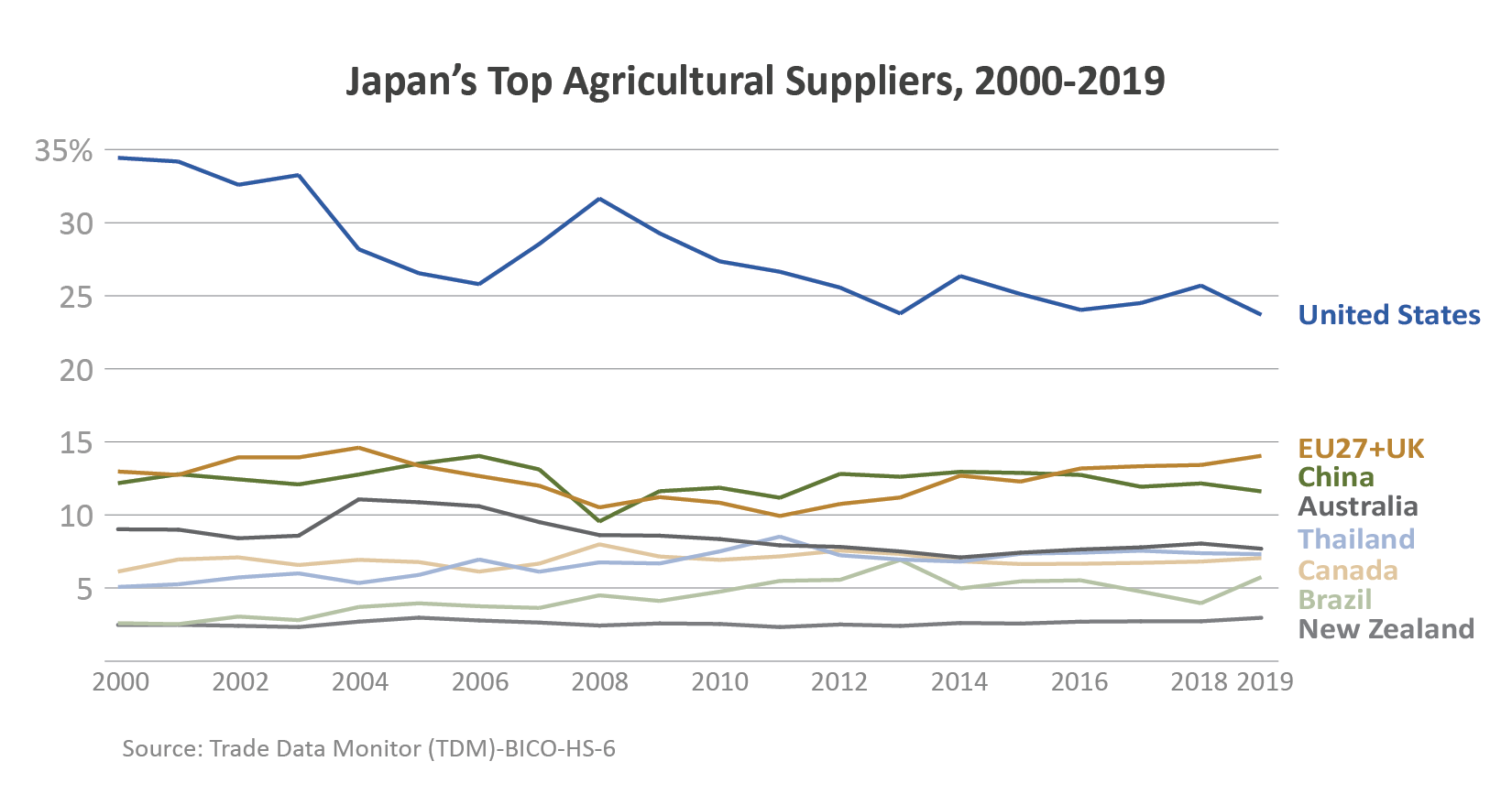 Japan’s declining agricultural production and social and demographic factors indicate that it will continue to rely on imports to satisfy both short- and long-term food demand. Specifically, health foods will play an important role in the food sector as consumers place more emphasis on not only food quality but also the functionality of the food they consume. With tariff parity, a longstanding bilateral relationship, and advanced food processing technology, the United States is well positioned to supply quality food ingredients and health food products to meet Japan’s growing demand for health foods.

1 Purchasing power parity (PPP) allows GDP and income comparison across regions by comparing currencies based on what they can buy (“basket-of-goods approach”) and not by their nominal exchange rates.