Early Assessment of the Agreement

The U.S.-Dominican Republic-Central America-United States Free Trade Agreement (CAFTA-DR) has been a catalyst for growing exports for U.S. agriculture. When the five Central American countries (Costa Rica, El Salvador, Guatemala, Honduras, and Nicaragua) and the Dominican Republic are taken as a single market, the CAFTA-DR region is a top 10 market for U.S. agricultural products. U.S. agricultural export growth to the CAFTA-DR region in the last five years exceeds the growth rate of top export markets such as Canada, Mexico, and China. Much of the increase in exports can be attributed to the implementation of the agreement. Reduced tariffs coupled with a growing middle class in the region that is propelling demand, the United States is well positioned to continue increasing agricultural exports to this region and growing market share.

CAFTA-DR as a single market is the seventh largest export market for the United States, after Canada, Mexico, Japan, China, EU-27 and South Korea. In 2009, the United States exported $3.07 billion of agricultural products to the CAFTA-DR region, up from $1.91 billion in 2005, the year before the CAFTA-DR FTA began to take effect. This represents a 61-percent increase, which outpaced overall U.S. agricultural export growth of 55 percent over the same time period.

Despite unprecedented declines in world trade in 2009, a combination of strong underlying demand growth and reduced tariffs allowed the United States to increase agricultural exports to the CAFTA-DR region and grow market share. Demand growth has been primarily driven by lack of sufficient production in the region, growing protein demand, a more conducive business environment led by U.S. trade capacity building efforts, and a growing middle class. According to Global Insight, the middle class population in the region grew 45 percent between 2005 and 2009.1

As the global economy continues to rebound, the CAFTA-DR FTA will provide U.S. agriculture an opportunity to take advantage of the growing middle-class population in the region. This year, exports to date are outpacing 2009 year-to-date exports. In the first six months of 2010, exports to the CAFTA-DR countries were $1.6 billion, up 8 percent from the same time period in 2009. While the full assessment of the 2010 export performance is still to come, historically U.S. agricultural exports to the region are strongest in the last three months of the calendar year.

Many U.S. agricultural products have found considerable success as the CAFTA-DR FTA has been implemented. The products featured in Table 1 are examples of increased trade facilitated by the lowering of CAFTA-DR country import barriers. Exports by volume and value of these products have been significant.

U.S. exports of red meats (fresh, chilled and frozen) to the CAFTA-DR region overall have increased 212 percent by value and 218 percent by volume since the agreement came into force. One catalyst for this growth has been the negotiated tariff rate quotas (TRQs). For example, imports of U.S. Red Meats (Fresh/Chilled/Frozen) by the Dominican Republic are expanding significantly above the TRQ levels. In 2009, these products soared pass the TRQ volume by 363 percent . According to FAS Santo Domingo, a primary reason for this success is that for the first time importers are discovering the quality of these products and the growing consumer demand for them. 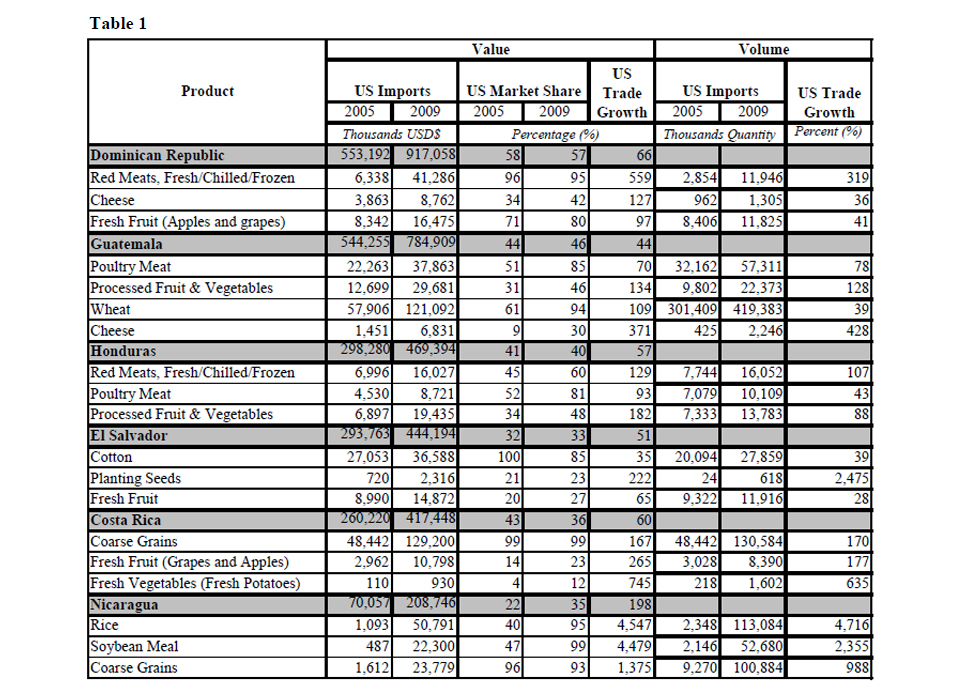 While the CAFTA-DR FTA has yielded some market share gains, room for growth remains. The& United States continues to work to improve the transparency and predictability of TRQ administration in the region. United States exporters should benefit from the continued focus of the Administration on monitoring and enforcement to ensure that trading partners abide fully with their commitments. The United States is also working diligently to expedite some CAFTA-DR governmental delays in approving some registrations and certificates.

The United States now enjoys lower duties than many competitors as a result of CAFTA-DR. However, competition is increasing. The primary competition faced by the United States in the region is intra-regional trade. Internal CAFTA-DR trade accounted for 28 percent of imports in 2009. The largest single country competition comes from Mexico, which commanded a market share of 6 percent in 2009.

Like many countries worldwide, the members of CAFTA-DR have continued to increase the number of FTAs to which they are party. On May 19, 2010, five Central American governments, Panama and the European Union signed the Acuerdo de Asociación entre Centroamérica y la Unión Europea (AACUE). However, this agreement has not yet been ratified and will not come into force until the beginning of 2011. Once enacted, it will immediately eliminate import and export tariffs on many agricultural commodities. Signature countries agreed to the terms of the contract which will remove nearly all tariffs between Central America and the European Union over the course of 15 years.

According to recent reports submitted by FAS/San Jose, U.S. exporters are likely to experience increased competition in Costa Rica due to additional EU investments in Central America and comparative advantages in trade enjoyed by the EU in various sectors. In 2009 the EU captured a 5 percent market share, down slightly from 6 percent in 2005. The U.S. should maintain a strong foothold in bulk commodity exports as well as intermediate and forestry products. The consumeroriented sector could be most affected by the new AACUE.

1The middle class in the CAFTA region (excluding the Dominican Republic) is defined as households with real PPP incomes greater than $20,000 a year,

Prospects for U.S. Corn in Latin America
Latin America accounts for about 25 percent of global corn imports . The region’s corn demand for imported corn has grown steadily over the years supported by expansion in the livestock sector...
China: Evolving Demand in the World’s Largest Agricultural Import Market
While trade tensions and China’s retaliatory tariffs slashed U.S. agricultural exports to China in 2018 and 2019,
View More Data & Analysis