The United States-Colombia Trade Promotion Agreement (CTPA) entered into force on May 15, 2012, laying the foundation for a surge in U.S. agricultural exports. Since 2012, U.S. agricultural exports to Colombia nearly tripled from $1.1 billion to $2.9 billion in 2018. Despite its geographic proximity to major U.S. competitors Brazil and Argentina, Colombia, the third-largest economy in South America, purchases half of its agricultural imports from the United States. Preferential access from CTPA and a strong Colombian economy have allowed the United States to increase its market share from 19 percent prior to CTPA, to 50 percent in 2018. Changing demographics, a growing middle-class, and consumer trends toward more modern retail outlets is expected to keep demand strong into the future for high-quality U.S. agricultural exports.

In addition to CPTA, political stability and a dynamic economy have contributed to Colombia becoming the United States’ 12th-largest destination for agricultural exports, up from 19th place in 2012. Colombia ranks as the 29th-most populous nation with 49 million people and the 39th-largest economyi. Colombia’s per capita gross domestic product (GDP) is $15,600 and growing at a healthy annual rate of 3.5 percentii. Over the past decade, economic development has lifted most Colombian households out of poverty and into the middle class. Colombia’s middle class will increase by a million households to five million by 2024 . Middle class households have the purchasing power to shop at modern retail outlets and to purchase higher-quality imported goods. Eighty percent of Colombia’s population resides in urban communities. Urbanization and middle-class expansion play a major role in educating and exposing Colombian consumers to healthier and higher-quality food alternatives.

Over the past decade, Colombian retail food and non-alcoholic beverage sales have grown by 36 percent compared to only 19 percent in the rest of South Americaiii. Colombia has recently undergone a period of consolidation in its food retail sector that has led to more large-scale, modern retailers and food chains, reducing the number of mom and pop retail outlets. The larger retailers that emerged have better facilities, enhanced distribution networks, improved cold storage, and more shelf space allowing them to carry more imported foods.

Traditionally, Colombians have consumed most of their meals at home eating locally produced foods. These home-cooked meals were preferred because they were locally available, well known, and inexpensive. Imported and packaged foods were traditionally viewed as expensive and unhealthy. However, higher levels of disposable income and shifts in the household structure have contributed to changing dietary habits and food consumption patterns. Colombians can now afford to base their purchasing decisions on the quality, variety, and convenience of products, and not entirely on price. This shift is creating opportunities to sell more U.S. prepared foods and consumer-ready goods.

In addition, a changing preference for fast dining and convenience foods is being driven by the adaptation of dual-income households. More women entering the workforce has transformed consumer purchase preferences and lifestyle preferences. E-commerce sales are becoming more popular and the need for quality, consumer-ready products has stimulated growth in fast-casual dining experiences. The growth in tourism, immigration from neighboring countries, and food promotion programs have also influenced consumer preferences and created a demand for new food and dining experiences in major Colombian cities. Driving demand for consumer-oriented products even further are Colombian retailers who want unique and high-quality products for their establishments in order to meet the changing tastes of diverse consumers. These changing trends are leading to the consumption of higher quality, often imported foods.

Colombian Agricultural Imports and U.S. Market Share Since Implementation of CTPA in 2012 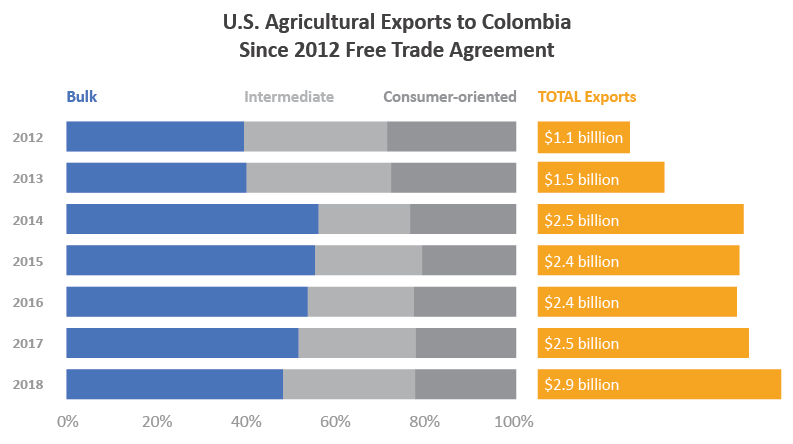 Agriculture is an important part of the Colombian economy, contributing 7 percent to Colombia’s GDP and accounting for 17 percent of the country’s workforce. Colombia produces mostly tropical products with its top exports being coffee, cut flowers, fresh fruit, palm oil, and sugar. Given its tropical geographic location, Colombia is dependent on imports from temperate regions for much of its grain, feed, and meat supplies. With the recent growth of the food processing sector, Colombian manufacturers rely heavily on global imports of raw-materials and ingredients. By importing and processing food products domestically, manufacturers have been successful at providing quality products at lower retail prices while minimizing distribution costs. U.S. agricultural exports to Colombia in 2018 were a record $3 billion. Major U.S. agricultural exports in 2018 included corn, soybean meal, soybeans, pork and pork products, and soybean oil. Since implementation of CTPA, U.S. exports of meat such as beef and pork, and raw materials like corn and soybean meal, have experienced tremendous growth.

Corn accounts for nearly 32 percent of U.S. agricultural exports to Colombia. Since implementation of CTPA, U.S. market share for corn jumped from 6 percent to 97 percent.  Ninety-five percent of corn imports are destined for animal feed with the remaining 5 percent for human consumption. Expanding poultry and livestock production is expected to keep demand for corn strong into the future.

Dairy products have benefited from promotional efforts, innovative packaging, and growing consumption because of urbanization and expansion of the middle class. Prior to CTPA, Chile was a major supplier of dairy products to Colombia. Preferential treatment for U.S. dairy products began immediately in 2012, increasing U.S. exports to $73 million in 2018.

Meat products such as pork, poultry, and beef are more in demand by urban consumers because of Colombia’s changing demographics. Higher incomes have shifted predominately vegetable diets to diets incorporating more animal protein. The United States is the leading supplier of pork, poultry, and beef to Colombia with 91-percent, 87-percent, and 75-percent market share, respectively.

Non-alcoholic beverages (excluding juices) are growing in popularity among Colombians. With recent efforts by the Government of Colombia to raise awareness on health issues and obesity, there is a growing demand for flavored waters, teas, and vitamin-fortified beverages with less sugar content. Since 2012 U.S. exports of non-alcoholic beverages have increased 22 percent to $20 million in 2018.

Colombia is a fast-growing market for value-added food products and the United States is positioned as a major supplier to meet this growing demand. Obesity and heart disease are major health issues impacting Colombians. The Colombian government sponsors several educational programs to implement better nutritional standards for women and children. Following labeling trends similar to those in other South American countries, the Ministry of Health in Colombia has already taken measures to minimize high-salt intake by domestic consumers through the development of the National Strategy on the Reduction of Sodium Intake. Colombian retailers are also implementing marketing programs that advertise foods that promote healthier lifestyles.  Healthy, natural, organic, and ethnic food categories are new and have been well received by retailers. The following are a few examples of healthier food products from the United States with zero or reduced duties that are expected to benefit from Colombia’s evolving preferences:

Vegetable oils such as olive oil and rapeseed oil are growing in popularity among Colombians.  U.S. exports of non-soy vegetable oils have increased by 71 percent since 2012 to $24 million in 2018.

Tree nuts serve as a healthier snack alternative for Colombians. The United States is the top supplier of tree nuts to Colombia with 63-percent market share. Since 2012, U.S. exports of tree nuts increased from $6 million to nearly $20 million in 2018.

Pulses such as beans and lentils have experienced tremendous growth since implementation of CTPA. The United States is the second-largest supplier of pulses, following Canada. Since 2012, U.S. exports of pulses to Colombia have nearly quadrupled to $15 million in 2018.

U.S. exporters continue to succeed in Colombia because of CTPA, a dynamic economy, and changing consumer trends. Looking forward, evolving consumer preferences will continue to provide opportunities for U.S. exporters to benefit from Colombian imports of high-value food products and raw materials. As the Ministry of Health and the Government of Colombia strive to improve the health of citizens, U.S. exporters and manufacturers benefit by complying with the new government standards and abiding by the preferred labeling standards. By taking proper precautions to display transparent information and labeling, consumers are more likely to choose U.S. products for their notable quality. Targeted promotional and marketing activities such as those for dairy products and non-alcoholic beverages also continue to benefit U.S. producers. As the United States has out-competed Colombia’s other major trade partners, Colombian importers and distributors attribute the United States’ success to quality, price, and service. With lifestyles and tastes changing in Colombia, retailers and food manufacturers believe that the demand for imported U.S. goods will remain strong and continue to grow.

Opportunities for U.S. Agricultural Exports in Egypt and Algeria

Egypt and Algeria are two of North Africa’s most rapidly growing markets for the food and beverage (F&B) processing and manufacturing sectors.
International Agricultural Trade Report

Opportunities for U.S. Snack and Confectionery Exports to Latin America