The significant rise of dog- and cat-owning households in East Asia presents an opportunity to increase the U.S. exports of pet food.  In China, from 2015 to 2019, the percentage of families owning dogs or cats increased by 40 percent and 131 percent, respectively, while U.S. exports of pet food to China (dog and cat food/ HS Code 230910) increased by 88 percent from 2018 to 2019 alone.  Despite this increase in exports to China, the United States only holds 16 percent of China’s $307.6 million annual pet food import market.  The recent Phase One agreement removed significant barriers to U.S. pet food exports to China, potentially paving the way for a substantial increase in sales.  U.S. pet food exports to China are up 124 percent from January through June 2020, over the same period in 2019.  The new e-commerce regulations, potentially allowing the sale of U.S. pet food via this channel combined with the growth of  e-commerce in the pet food market as a result of COVID-19, may present a unique opportunity to increase U.S. market share in the Chinese pet food market.

In East Asia’s more developed markets (Japan, South Korea, Taiwan, and Hong Kong), cat ownership is showing consistent growth across the region, especially in environments with high population density, while dog ownership in Japan and Hong Kong has declined.  While e-commerce has played a significant role in regional pet food sales, COVID-19 has accelerated this trend, particularly with increasing incomes and changing generational attitudes towards pets as family members.  The shift to smaller dogs and cats along with changing attitudes has positively effected an increased market demand for organic, premium, and niche-healthy pet foods.  Pet food consumption should not be severely impacted by COVID-19 as feeding pets is seen as a necessary budget item.  While the macroeconomic trends driving pet food consumption in East Asia continue to grow, careful attention to trends and trade policies in each market are vital to successfully entering these markets and creating long-term partnerships.

Euromonitor International (Euromonitor) estimates the East Asian pet food market at close to $11 billion in retail sales in 2019, which is an increase of 45 percent, or $6 billion, from just 5 years ago.  Euromonitor estimates that the market will grow to $23 billion by 2025.  Much of the increase in East Asian pet food demand is due to the transition to prepared dog and cat food replacing non-prepared food, including table scraps, and further aided by the rising middle class’ desire for pets.  Aging populations whose children have left home are increasingly turning to pets for companionship.  Likewise, a growing number of childless, single adults are opting for the same.  From 2015 to 2019, according to data from Euromonitor, cat ownership trends continue to show major increases in South Korea (102 percent) and Taiwan (53 percent); and marginal increases in Hong Kong (7 percent) and Japan (2 percent).  Dog ownership has declined in Japan (-11 percent) and Hong Kong (-4 percent); and increased in Taiwan (21 percent) and South Korea (39 percent).

According to import data gathered by Trade Data Monitor, LLC, East Asian pet food imports totaled $1.52 billion in 2019, a 44 percent increase from 2015.  U.S. market share in East Asian pet food imports hovered around 20 percent over the last 5 years.  The United States, Thailand, Canada, and the European Union (EU), together, make up approximately 75 percent of East Asian imports over the last 5 years.  While the EU market share has declined marginally from 19 to 17 percent in the last 5 years, Canada’s has increased from 4 to 9 percent.  According to export data from the Census Bureau, U.S. exports of pet food to East Asia grew 39 percent from 2015 to 2019, reaching $280 million in 2019.  Exports to China grew by 88 percent from 2018 to 2019 alone.  Despite this increase in exports to China, the United States only holds 16 percent of China’s $307.6 million annual pet food import market. 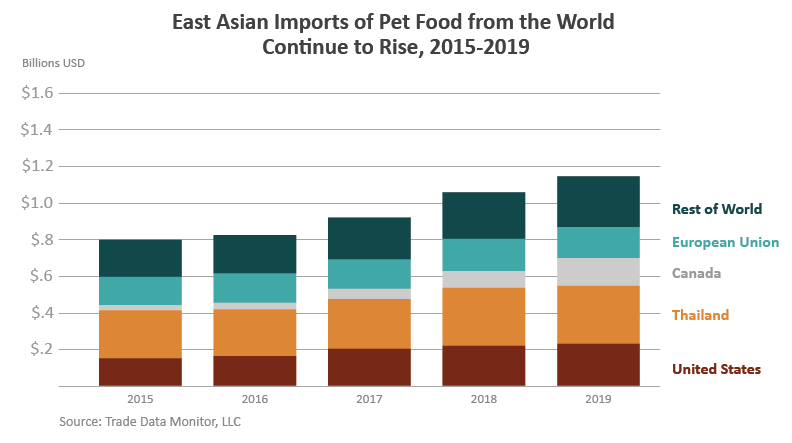 According to the World Trade Organization (WTO) tariff data, as well as information gathered from the Foreign Agricultural Service’s (FAS) global attaché reports, U.S. pet food exports are duty-free to Hong Kong, Japan, and South Korea; and the tariff is marginal for Taiwan.  China’s most favored nation (MFN) rates are 4 percent, while the latest posted retaliatory tariffs were at 25 and 35 percent, depending on the product.  Due to the Phase One agreement and the tariff exclusion process, pet food exports currently enjoy the MFN rate.

As a result of the Phase One agreement and the April 13, 2020, pet food protocol, U.S. pet food exports to China are up 124 percent through June 2020, over the same period from 2019.  For more information on the pet food protocol to allow new ingredients in pet food exports, please see this news release.  In 2019, the U.S. exports of pet food to China totaled $10.9 million.  Through June of 2020, the United States has already exported $11.5 million.  Euromonitor estimates that pet food sales in China will grow by 149 percent over the next 5 years.  E-commerce could provide a huge channel for augmenting exports.  Pet food is a product specifically designated as eligible for China’s Cross Border E-Commerce channel that went into force on January 1, 2019 (see GAIN report cited above for additional details).  Within the domestic market, e-commerce platforms, such as JD.com and Tmall, are hugely popular, especially with Generation Z and Millennials driving pet ownership and premiumization trends in China’s growing middle and upper-middle class.  Particularly due to COVID-19, E-commerce will hold substantial market share for pet food, especially in the higher quality and niche products.

Hong Kong has been an important export market and has enjoyed duty-free access for U.S. pet food.  While exports had been trending up 73 percent from 2015 to 2018, the civil unrest and protests in 2019 hurt supply chains and exports, which were down 8 percent at $56.6 million.  While macroeconomic trends affecting pet food demand in Hong Kong remain stable, attitudes towards pets, premiumization, and cat ownership will drive future increases in demand.  Special attention to these changing trends, focusing on high-value and high-quality pet foods, and developing e-commerce channels will be key to maintaining and expanding U.S. market share.  For more information and analysis on Hong Kong, please see the forthcoming 2020 GAIN report on the pet food market and the 2019 GAIN report HK1929, “Hong Kong: Best Prospects Analysis for U.S. Agricultural Exports to Hong Kong”.

Exports to Taiwan Tapering Off but Underlying Potential Remains

Exports to Taiwan have remained stable averaging $35.1 million over the last 5 years, according to U.S. Census Bureau data.  Competition from the domestic market and increasing market sophistication mean that careful marketing towards premiumization in both the dog and cat food sectors are key to increasing U.S. market share.  The underlying trends driving pet food sales, which Euromonitor estimates will increase by 78 percent over the next 5 years, including substantial increases in families owning pets in the last 5 years (53 percent for cats and 21 percent in dogs) and changing attitudes towards pets, make this an important export market for the U.S. industry.  U.S. export growth will come likely from an increase in value as opposed to quantity.

Exports to South Korea have increased 34 percent from 2015 to 2019, reaching 46.1 million USD in 2019, according to U.S. Census Bureau data.  Euromonitor estimates that pet food sales in South Korea will grow by 34 percent over the next 5 years due to increases in the percentage of dog and cat owners, 102 and 39 percent over the last 5 years, respectively.  Changing attitudes and premiumization characterize this market as well as increasing competition from domestic producers in the niche market.  Consumers looking for high-quality pet food continue to prefer imported products with a focus on nutrition according to the Korea Pet Food Association.  Even though the market is promising, it remains highly competitive.  Marketing and competitive products are key to expanding exports to South Korea.  Please see the recent GAIN report KS2019-0053 for more information on the market and opportunities for growth in “South Korea Pet Food Market 2019”.

Japan has been an important export market for U.S. pet food worth $130.4 million in 2019.  Exports to Japan have increased 39 percent from 2015 to 2019 according to U.S. Census Bureau data.  Despite the levelling off of the percentage of families with cat ownership (2 percent) and decreasing families with dog ownership (11 percent) over the last 5 years, Euromonitor forecasts pet food sales to increase by 10 percent over the next 5 years.  These trends continue the shift towards smaller mammals, which will decrease the volume of per-pet consumption of pet food.  The trends in ownership add additional pressure to Japan’s highly competitive market, which has led to even more segmented product categories.  Exporters should pay attention to increasingly tailored products based on life-stages, breeds, sizes, and health requirements of in-house animals.  E-commerce and specialized pet stores are likely to gain an increasing market share in distribution channels.

In East Asia’s more developed countries and major cities, much of future growth in exports could come from higher unit values of exports resulting from a demand for higher-value end products and focusing on expanding market share for cat food.  In the developing parts of China, growing pet populations and the shift to processed pet food should drive continued demand for imported pet food.

E-commerce has seen substantial growth in the pet care industry over the last 5 years globally, specifically in China, South Korea, and Taiwan.  COVID-19 will accelerate this trend towards E-commerce as the major platform of choice for the Millennial and Generation Z buyers who are driving growth in pet ownership and premiumization in the rapidly expanding East Asian market.  These buyers will continue to seek high quality, diverse, and niche pet foods online—products primed for delivery from the U.S. industry. 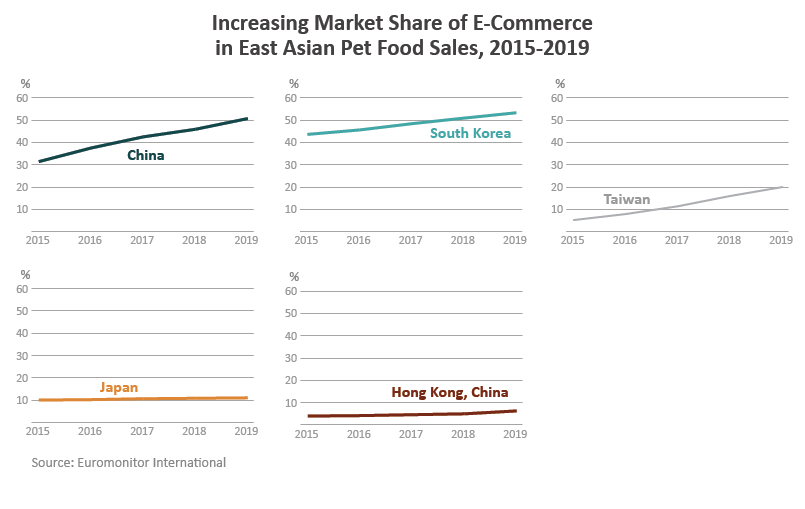