During the past decade, Turkey has emerged as a major exporter of agricultural products, both to the Middle East and other markets. Exports have tripled during this period, and were valued at more than $16 billion in 2013. Out of the top 20 agricultural exporters, only India, China and Ukraine have higher export growth rates than Turkey during the past five years. This growth has continued into 2014, and exports during the first three-quarters of the year are up another five percent. 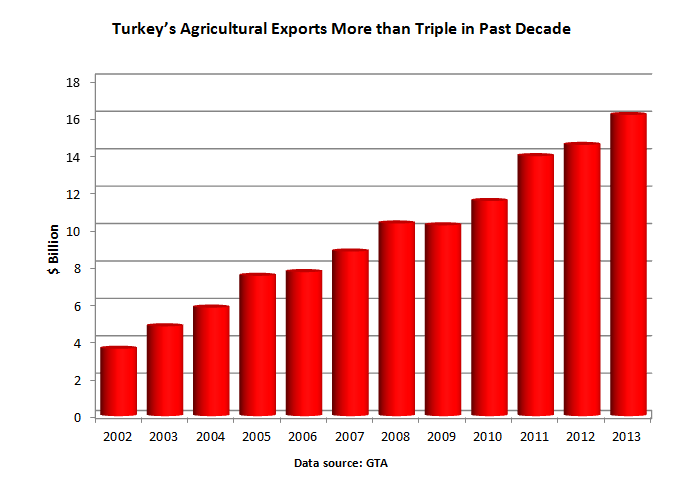 While Turkey has traditionally been a significant supplier of fruit and vegetables, in recent years exports have diversified to include a wide range of products. Some key products which have seen strong growth include:

Sunflower Oil: Turkey is the world’s largest exporter of refined sunflower oil. The majority of these exports are first imported into Turkey as crude oil from Russia and Ukraine, and then refined inside and re-exported, mostly to Iraq and Syria. Turkey’s tariffs on crude oil are considerably lower than the current 50-percent tariff on refined oil, which helps encourage further processing inside Turkey.

Raisins: Turkey remains the world’s largest exporter of raisins (followed by the United States), accounting for nearly one-third of total global trade. The lion’s share of these exports are to the EU-28.

Poultry: Turkish poultry exports have also been expanding in recent years (for more information see previous FAS report). In fact, Turkey is expected to be the world’s sixth-largest exporter in 2014. Almost all of these exports are shipped to other Middle East markets, especially Iraq. Turkey has a comparative advantage over other suppliers as a result of its close proximity to these markets, its ability to supply halal product, and the fact that it supplies whole broilers, which many customer countries prefer.

Pasta: With the rapid expansion of its pasta exports, Turkey has become the world’s third-largest exporter of pasta after the EU-28 and China. Most of this pasta is going to Sub-Saharan Africa, where and Turkish pasta has largely replaced Italian pasta in many markets.

Flour: Turkish flour exports have surged, reaching almost $1 billion in 2013 and surpassing two million metric tons, making Turkey the world’s largest exporter of flour (see chart below). While the majority of Turkish flour goes to Iraq and Syria, exports also go to Asian markets such as the Philippines and Indonesia, and exports have been rising to Sub-Saharan African markets. In fact, flour exports to Sub-Saharan Africa have tripled in the last five years. 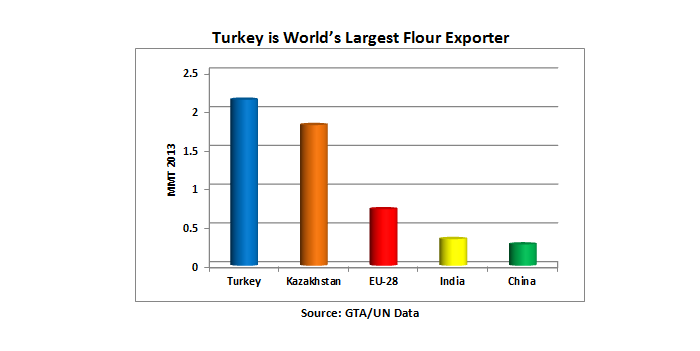 While trade-distorting agricultural support policies are trending downwards amongst OECD countries, Turkey’s support has remained high according to the OECD. Wheat is a major beneficiary of Turkish agricultural support and benefits from minimum purchase prices, input subsidies (diesel, fertilizer and certified seeds), and deficiency (premium) payments. Wheat-specific payments increased significantly from 1996 through 2013. However, as a percentage of the value of production support varied significantly by year due to fluctuations in market prices ranging from 6-52 percent. Since 2004, the minimum purchase price, supported by high tariffs, has increased by more than 40 percent. Further, Turkish processed wheat products (flour and pasta) benefit from export subsidies.

Although the EU-28 remains Turkey’s largest export market, nearly all of Turkey’s growth in trade has been to developing countries, especially those in the Middle East. In 2013, nearly a quarter of Turkey’s agricultural exports went to Iraq. Exports there more than doubled in just three years – from $1.5 billion in 2010 to $3.5 billion in 2013 – led by vegetable oil, flour, poultry and chicken eggs. The turmoil in Syria has also increased import demand there, and Turkish agricultural exports to Syria quadrupled in 2013, and are up another 50 percent in the first half of 2014.

Two other regions that have been increasing markets for Turkish products are the Former Soviet Union and Africa. Turkish exports to Russia, in particular, have been strengthening and could increase even more this year in light of Russia’s year-long ban on a wide range of agricultural products from the EU, United States, Canada, Australia, and Norway. Turkish exports to Sub-Saharan Africa have also skyrocketed. 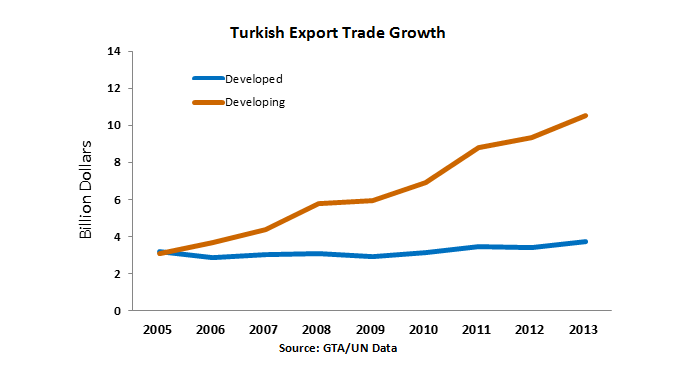