Part One of a two-part report about Brazilian exports. Part Two was published March 6, 2012.

Brazilian crop and livestock production continues to expand, building on rapid gains over the past few decades. Crop production is shifting to new regions of the country while pasture conversion holds potential in more developed areas of the Center-West. Brazilian exports are also surging with meat and soybeans leading the way, providing more competition for U.S. products.

In 2001, Brazilian agricultural exports totaled $16 billion. Exports climbed to a record $62 billion in 2010 and the final export data for 2011 is expected to surpass $80 billion. This represents an increase of 400 percent over 10 years. Comparatively, U.S. exports rose about 175 percent over the same period. The rapid rise in exports is a result of production gains brought about by higher yields and new area under cultivation. Crop area has expanded rapidly and is expected to continue to do so.

While Brazil’s Ministry of Agriculture estimates that crop area will continue to grow, historical yield data shows that the production boom is, in part, a result of the rapid adoption of biotech seed varieties. According to Celers Consulting, biotech soybeans, which Brazil began growing just 10 years ago, now accounts for 83 percent of planted area. Biotech corn, which has been grown in Brazil for less than five years, has soared to cover 65 percent of total area. Yields have also been spurred by greater input usage, with fertilizer use expected to reach record levels this year. All this led to record total grain production in the 2010/11 crop year as well as a record in the total value of production for the top 20 crops at nearly $200 billion. Yield growth is also expected to continue and therefore Brazil is expected to outpace the United States in the production of many key commodities, as illustrated in the chart above. Based on USDA baseline projections and the 10-year forecasts published by the Brazilian Ministry of Agriculture, the combined average growth over the next decade for the commodities listed in the chart is nearly 27 percent in Brazil compared to 8 percent for the United States. 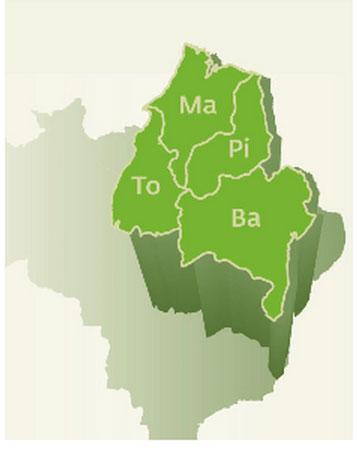 The tremendous area expansion has slowed in Mato Grosso, the agricultural frontier state in the Center-West region that is now the Brazil’s top soybean production state. However, completion of the long-awaited BR 163 road connecting Cuiaba in Mato Grosso with the Amazon port town of Santarem may bring some additional land along the road into cultivation. Conversion of pasture to crops has the most potential to result in significant increases in planted area. It is estimated that as much as 200,000 hectares may be converted to cropland this coming year. Furthermore, forecasts are that as much as 9 million hectares of pastureland are suitable for crop production. However, at the same time that pasture land is being lost to crops, integrated crop pasture systems and improved pastures are allowing the same or increasingly larger numbers of cattle in the state.

Though Mato Grosso has been the focus of crop expansion in Brazil over the past few decades, new regions closer to the coasts hold potential. Large-scale producers in Mato Grosso, seeing little room for expansion in the state, are increasingly purchasing land in Piaui, Maranhao, and Tocantins. These states are closer to ports and land is generally priced lower than in Mato Grosso. However, due to the drier climate, typically only one crop is harvested in these arese each year, compared to two in Mato Grosso.

Brazil’s meat exports have surged in part due to expansion of pork, poultry, and beef production into new areas. Traditionally, meat production was concentrated in southern Brazil, but it has been moving more towards relatively new production areas such as Western Bahia and Mato Grosso, areas mostly considered to be savannah. The move of concentrated animal production to these regions is logical due to the abundant supply of grains, oilseeds, and cottonseed meal. Given very high transport costs and distance to ports and meat processing facilities in the south, producers are finding it more profitable to raise livestock at the source of feed and ship the high-value meat to export or population centers. For example, production of beef has increased significantly in the relatively new agriculture region of Mato Grosso.

Along with area expansion, gains are coming from increased feeding. Cattle in Brazil have traditionally been grass fed all the way to slaughter but are increasingly fed in feed lots for the final 90-100 days. In 2005, only an estimated 150,000 head of cattle were finished in feed lots in Mato Grosso. This grew to 510,000 in 2008 and state officials forecast 800,000 head in 2011.

Growth in Exports Led By Soybeans, Sugar, and Meat

Increases in crop and meat production have allowed Brazil’s agricultural exports to reach record levels, led by shipments of meat, sugar, soybeans and soybean products. Meat exports grew from less than 2 million tons in 2000 to just over 6 million tons in 2011, and are conservatively forecast by the Brazilian Ministry of Agriculture to reach 8.5 million tons by 2020.

Brazilian Share Grows in China, Russia, and the EU

Along with expected record-level exports in 2011, global market share should also reach a record high. Brazil’s share of world agricultural exports in 2010 is estimated at 9 percent, up from 5 percent a decade earlier. This expanded share has come at the expense of traditional, developed exporting nations such as the United States, Canada, the European Union and Australia, which have all seen their market share fall over the past 10 years.

The EU is the largest market for Brazilian agricultural exports, followed by China, Russia, and the United States. These four markets account for roughly 83 percent of all Brazilian agricultural exports. Within these markets, Brazil has increased market share significantly over the past decade. For example, Brazilian shipments made up only 5.8 percent of total Chinese agricultural imports in 2000. This percentage increased to 15.1 percent in 2010. However, Brazil does not export a wide variety of commodities to China – soybeans and soybean oil comprise 83 percent of all exports. Meanwhile, in the EU the product mix is more diverse, with soybeans, coffee, tobacco and orange juice as the leading products. Brazil has also become a bigger player in the Russian market, with Brazil’s share of imports increasing from 4.7 percent in 2000 to 12.5 percent in 2010, led by sugar, beef and pork exports. 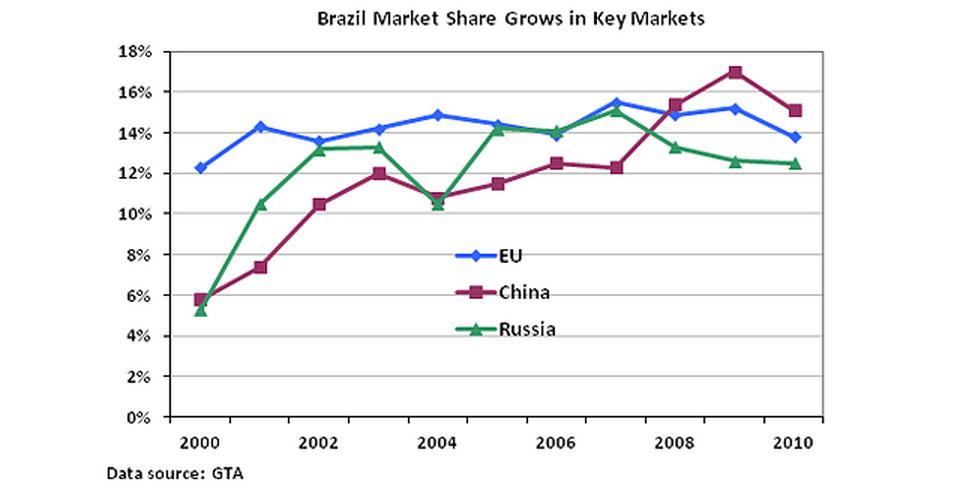 Even though the Brazilian government’s conservative forecasts (see first chart in this report) call for significant production gains over the next decade, Brazil faces several challenges to both production and export expansion. These include a strong domestic currency, poor agricultural transport logistics, environmental laws, laws governing foreign investment in land, and soaring domestic consumption. A follow up to this report will focus on the challenges that will likely limit growth in Brazilian production and exports. However, despite these challenges, Brazil still has room for further expansion in both area and yields and is therefore poised to provide growing competition for other exporters such as the United States.