Part Two of a two-part report about Brazilian exports. Part One was published Jan. 24, 2012.

Brazilian exports continue to surge and provide growing competition for U.S. farm products. There are significant constraints to this growth, however, including Brazil’s booming domestic consumption, strong currency, restrictions on foreign investment, and poor infrastructure. Though Brazil is expected to expand production, these constraints may limit the rate of growth and affect exports to top markets where the United States and Brazil battle for market share.

Top Brazilian export commodities are predominately priced in U.S. dollars in global markets. Therefore, a strengthening Brazilian currency (the Real) against the dollar lowers competitiveness and returns to producers, thus potentially affecting production and exportable supply. The current rate of 1.8 Brazilian Reals to the dollar is up from 2.5 just 18 months ago and is twice the value of the rate in November 2002. A booming economy that attracts investments and foreign capital, high interest rates, and a weak dollar globally are some of the factors supporting the strong value of the Brazilian Real. 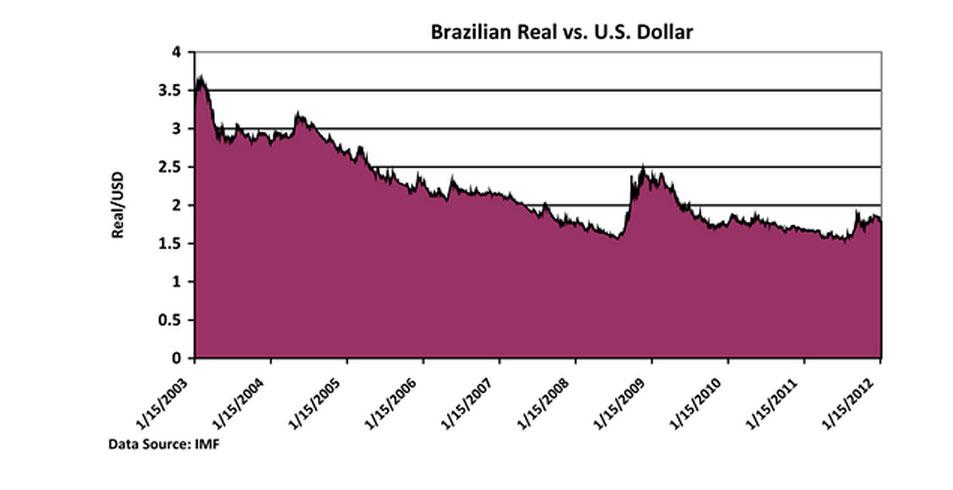 Strong economic performance and a growing middle class are expected to continue to support increasing domestic food demand, which is forecast to impact trade levels. For example, recent projections from the Brazilian Ministry of Agriculture indicate that, over the next 10 years, growth in rice, wheat, and dry bean consumption will exceed production and lead to increased imports. Meanwhile, despite surging soybean production, soybean oil exports are expected to see very little growth due to greater domestic food and biodiesel use.

The Brazilian Ministry of Agriculture forecasts growing meat exports over the next decade. Per capita meat consumption in Brazil is relatively high for a developing country and growth through 2020/21 is expected to be strong. If not for this continued high and growing domestic consumption, exports levels could see even faster growth. For example, poultry meat production is forecast to increase at an annual rate of 2.6 percent over the next decade while consumption increases at 2.5 percent.

Traditionally, Brazil has been open to foreign investment in the agricultural sector. Investment from major international agribusinesses over the past three decades has contributed to rapid expansion in grain and oilseed production through infrastructure improvements, processing facilities, and producer credit. Furthermore, the purchase of land by foreign companies and producers, along with migration of entrepreneurial farmers from southern Brazil, led to the opening of new land and towns in the center-west region of Brazil. However, a ruling by Brazil’s Attorney General in August 2010, which limits foreign investment in land and agribusinesses, is creating concern.

Domestic storage capacity is believed by sources in Brazil to be significantly less than half of production for most bulk crops such as soybeans, corn, and wheat. This places a great burden on the transportation system to handle crops at harvest even though the transportation infrastructure is considered by many to be the biggest roadblock to Brazilian agriculture. The result of poor transportation logistics for grain and oilseeds is evident when comparing the cash price for soybeans received by Brazilian and American farmers this past summer. In July of 2011 (several months after harvest), the cash price in Brazil’s largest soybean producing state, Mato Grosso, was about $10 per bushel while in Iowa it was about $13.5 per bushel. The Brazilian National Confederation of Agriculture estimates that, compared to competing grain exporting nations, Brazilian producers are at least 20 percent less profitable due to transportation inefficiencies. This detriment to competitiveness is most pronounced in the center-west, which is the largest production region for grains and oilseeds.

As illustrated in the chart below, Brazilian transport costs to China, the top global soybean importer, are significantly higher than the United States’ costs. In the top soybean production state of Mato Grosso, transport costs as a portion of the total landed price were 31 percent in 2011 compared to 16 percent in Iowa. Transport costs in the southern production states are comparable to those in the United States. However, soybean and corn production expansion is not focused in the south but rather in frontier states. From these interior states, grain is primarily transported by truck to ports up to 2,000 kilometers away. 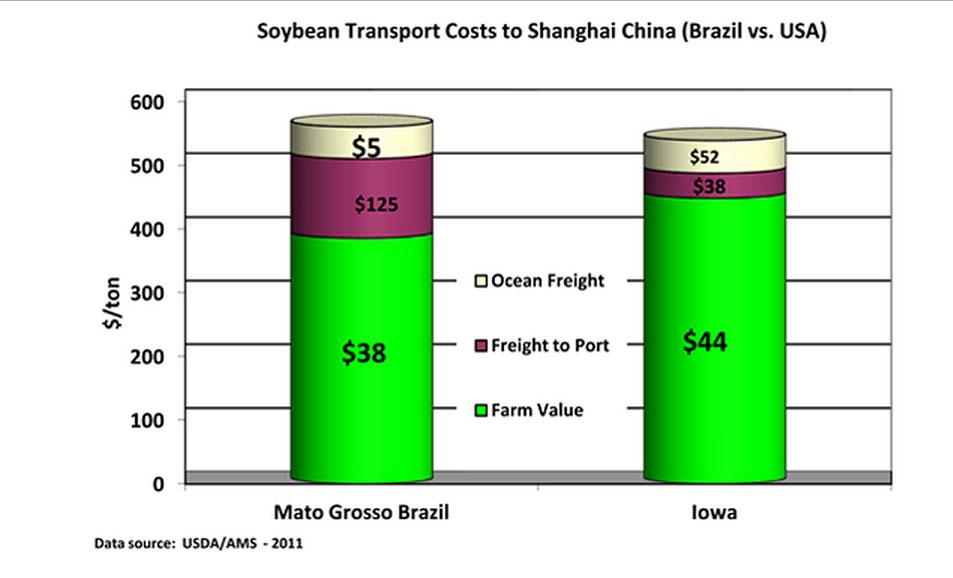 A recent study by the Brazilian Institute of Logistics found that the cost to improve roads to a sufficient state is 19 times more than the government’s current budget for such improvements. Furthermore, while 35 years ago 1.8 percent of Brazil’s GDP was invested in transportation improvements, that figure has fallen to just .8 percent. Given that only a very small portion of Brazil’s roads are paved and roads are the principal mode of grain transportation, road improvements could significantly affect Brazil’s international competitiveness.

One road project of significance is the paving of BR-163, which will connect the center-west region with the Amazon port of Santarem. Along with reducing internal trucking costs for grains and soybeans, it is expected that the road would decrease sea shipping costs to markets such as the European Union compared to ports in southern Brazil. The Brazilian Soybean Producers Association estimates that transport costs will fall by at least $30 per ton for soybeans trucked via BR-163 through Santarem. Along with this significant road project, rail improvements are also in the works, including extensions from the center-west region to northeastern ports. Currently, much of Mato Grosso’s corn and soybean harvests are not exported are trucked to poultry and livestock feeding operations in southern Brazil. The livestock is then shipped to northeast Brazil where animal protein consumption is increasing rapidly. Rail improvements will allow for greater meat production in Mato Grosso and direct shipment to the northeast either for local consumption or export. Therefore, the planned rail line extensions could increase the competitiveness of Brazil’s meat exports.

Challenges to Production and Exports Could Indirectly Affect U.S. Exports

As detailed in the previous trade report on Brazil (published January 24, 2012), the country continues to be one of the top U.S. competitors for exports of many commodities, including soybeans, corn, cotton, meats, and several horticultural products. Brazil and the United States continue to battle for market share in top markets including China and the European Union. Therefore, Brazil’s ability to meet the challenges detailed in this report will certainly affect export levels and competitiveness with U.S. agricultural products. Infrastructure constraints place Brazilian producers at a disadvantage to their American counterparts. However, lower Brazilian labor costs, generally lower land values, and a favorable climate that allows for multiple crops per year will continue to be factors pushing Brazilian production and exports to ever-greater levels.