The eight markets of North Asia1 account for just over one-fifth of the world’s population and global GDP. The region’s prominence is even greater in terms of global agricultural trade. North Asia accounts for 28 percent of global agricultural imports. Over the next decade, nearly 40 percent of the global growth in the middle class2 is forecast to occur in North Asia. This increase is expected to further boost demand for agricultural imports. As the top supplier to the region, accounting for 25 percent of the market, the United States is expected to continue as the primary beneficiary of this growth.

In 2008, North Asia surpassed North America to become the top U.S. regional market and, by 2012, accounted for more than one-third of all U.S. agricultural exports. Despite strong growth in the NAFTA market of Canada and Mexico, North Asia surged to the top regional market largely due to demand from China, Hong Kong, and South Korea. 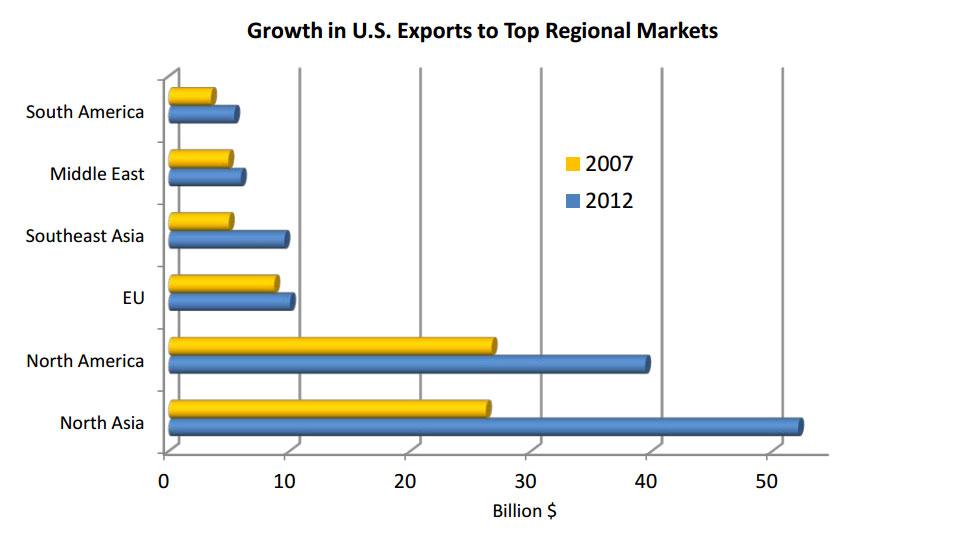 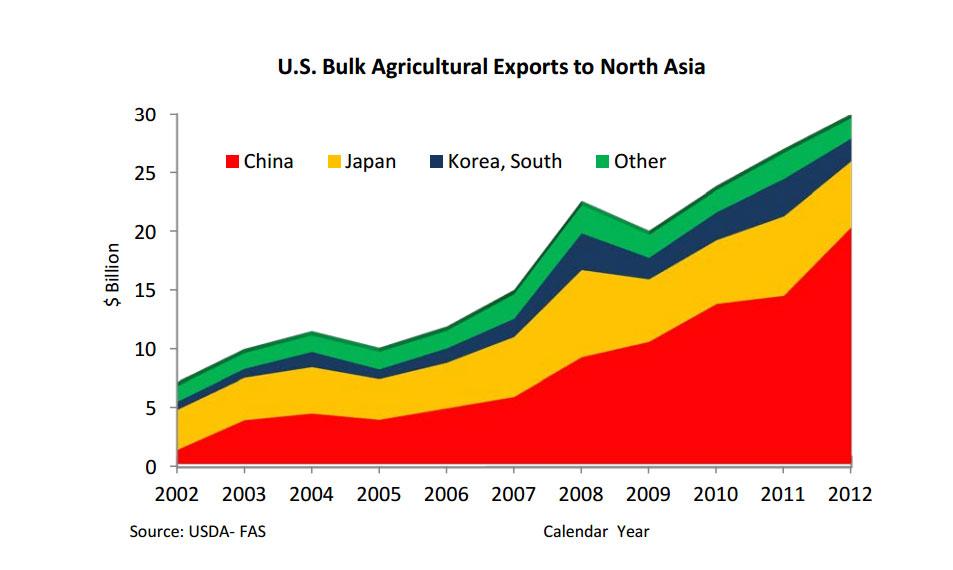 Much of the increase in bulk shipments is a result of soaring demand from China, which accounts for more than two-thirds of total U.S. bulk exports to the region. In fact, bulk commodity exports to China have grown from just $1 billion in 2002 to $20 billion in 2012. Much of this growth stems from greater Chinese demand for soybeans, though corn and cotton exports have also surged in recent years. Meanwhile, exports of corn to Japan, along with wheat and corn to South Korea, have grown over the past decade. Given expected continued gains in per-capita meat consumption in the region (particularly in China), import demand for grains and soybeans should continue to expand. In fact, according to USDA 10-year baseline projections, U.S. corn exports to the major markets in North Asia should increase from 29 percent of total U.S. corn shipments in 2011/12 to 36 percent by 2022/2023. Currently, more than half of all U.S. bulk exports to the world are shipped to North Asia and this share is likely to increase further.

In 2012, total North Asian agricultural imports from all global suppliers reached a record $227 billion, compared to $63 billion a decade earlier. The region’s impact on agricultural trade is clearly focused on import demand as North Asia comprises an estimated 28 percent of global agricultural imports. However, the region is also a growing exporter, with shipments reaching $59 billion in 2012.

North Asian agricultural exports (primarily horticultural products) to the United States increased over the past decade from less than $2 billion to nearly $6 billion. Despite this growth, the region remains a relatively small supplier of U.S. agricultural imports. However, trade within the North Asian region has grown even more and, as a result, production shortfalls are keenly felt in neighboring countries.China accounts for 73 percent of the region’s exports. Shipments from China to other North Asian markets have increased significantly in the past several years, with $15.5 billion being exported in 2012 – up 45 percent from just five years earlier.Japan is the top destination for Chinese exports, with Hong Kong and South Korea ranking as the third- and fourth-largest markets. Growth in Chinese exports to North Korea has also been impressive, increasing over the past decade from $81 million to $337 million.

North Asia’s importance to U.S. agriculture is expected to continue to grow in the future as growth in the middle class spurs ever-increasing import demand. Led by China, further gains in per capita meat consumption are expected, as is demand for high-value products such as almonds, dairy products, and a wide variety of processed food and beverages. Given limited land resources, importers in the region are expected to continue to rely on U.S. products to meet growing demand not only for bulk products but for processed foods as well.