In recent years, India’s exports have demonstrated phenomenal growth – especially to developing countries, which now account for nearly 80 percent of Indian exports. In particular, least developed countries (LDCs) have become increasingly important markets for Indian exporters and the Indian agricultural trade surplus with these markets has soared. Rapidly increasing Indian government support (See IN4044) for both production and exports has contributed to this surge in shipments to LDCs. India’s public stockholding program has been especially instrumental in increasing rice exports to LDCs. Nevertheless, India’s frequent export bans may, at times, adversely affect least developed countries that import Indian products.

Indian agricultural exports have grown from just over $5 billion in 2003 to more than $39 billion in 2013 and the export surplus is now $20 billion. India is now the world’s seventh-largest agricultural exporter, up from 13th a decade ago. Shipments have been particularly strong to LDCs. In 2013, India becoming the top agricultural supplier to LDCs, with sales of $5.2 billion. This is nearly $1 billion more than the European Union, which is the second largest supplier. Indian exports to LDCs were more than three times greater than U.S. exports to these markets last year. Furthermore, according to United Nations data, India’s export growth rate to these countries far surpasses the competition. 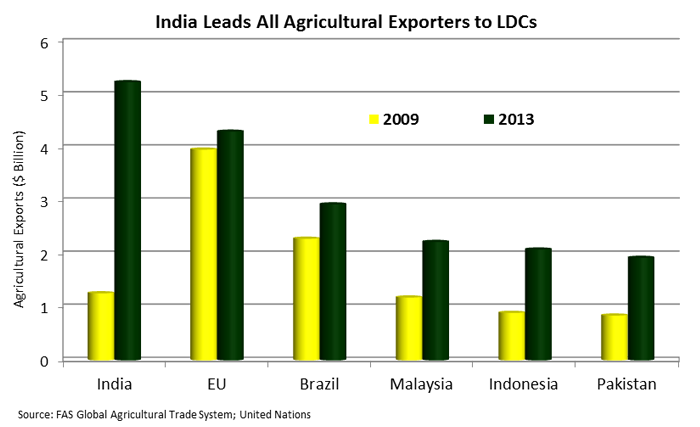 Over the past five years, India’s shipments to LDCs have grown at more than double the rate of Indonesia’s (314 percent vs. 133 percent), the second-fastest growing exporter to LDCs. By comparison, exports from the United States to LDCs over the same period increased only 28 percent. The leading LDC markets for India are in South Asia but exports to Sub-Saharan Africa are on the rise, nearly quadrupling over the past five years.

Agricultural trade growth with LDCs has certainly not been a two-way street. India enjoys a very large agricultural trade surplus in these markets, exporting more than $5 billion in 2013, while importing only $1.9 billion. Indian exports to LDCs have grown more than 300 percent over just the past four years while imports have increased only 20 percent. India enjoys a surplus in the vast majority of LDC markets, with the largest trade surplus in Bangladesh. India also has sizable and growing surpluses with several Sub-Saharan African countries.

India is a major exporter of cotton, soybean meal, corn, and sugar to LDCs. The increase in Indian government support for rice and wheat has driven up production and stocks. As a result, these grains now lead all products in export growth to LDCs, soaring from $83 million in 2010 to $2.4 billion in 2013. 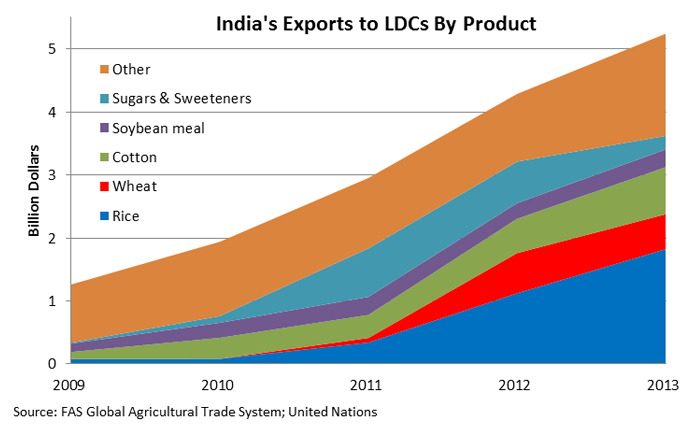 Wheat exports have benefited from direct export support in the form of open market sales from government stocks, which have led to increased available domestic supplies, lower prices, and, ultimately, greater wheat exports. In the 2013/14 Indian fiscal year (April/March), the government released 5.8 million tons of government-owned wheat to the market. That amount is expected to grow significantly  in the current fiscal year.

Higher support prices for rice and wheat, as well as other types of direct support, have spurred production, stocks, and exports. From 2011 to 2012, India doubled total rice exports to LDCs in just one year, becoming to the world’s largest rice exporter – a position it has maintained since 2012. Furthermore, the Indian government currently holds more rice in stocks than the total combined exports last year by the other leading suppliers: Thailand, Vietnam, Pakistan, the United States, Burma, and Cambodia.

India exports agricultural products to roughly 40 LDC markets, with impressive growth in nearly all over the past few years. Leading LDC markets include Bangladesh, Benin, Liberia, Senegal, Nepal, and Yemen. Indian rice exports have become increasingly important to Sub-Saharan Africa. Not only may the rice market in Benin be affected by the surge in rice imports but neighboring Nigeria has reportedly seen large-scale illegal imports from Benin that have circumvented Nigeria’s high import duties. Senegal has also seen a surge in low-priced imports from India. In fact, dozens of the LDC markets have experienced very rapid growth in Indian rice shipments, which overall have increased from $78 million in 2009 to $1.8 billion in 2013.  This increase in Indian exports has come at the same time as these countries are seeking to increase their own production for rice for greater self-sufficiency.

Export bans can affect LDCs that are net food importers. India has frequently used exports bans, particularly for wheat, rice, and cotton, over the past several years to control internal prices. India has also used export restrictions for a number of other commodities including pulses, vegetable oils, sugar, and onions. The government of India has shown little hesitation in shutting off exports if it believes that domestic prices are increasing and it will be more difficult to procure supplies at the minimum support price. Export restrictions on rice by major global suppliers, including India, in 2007 were important factors leading to record global prices in 2007 and 2008.