The Philippines is the eighth largest market for U.S. agricultural exports and the top market in Southeast Asia. Already a longstanding and reliable trading partner, the Philippines continues to offer many opportunities for exporters because of its young and growing population and rising household income. The Philippine food and beverage sector has grown significantly over the past decade, and while the usual consumption patterns have been forced to accommodate pandemic restrictions in recent years, the sector has been resilient. The United States saw a record year in 2021 for agricultural exports to the Philippines, but the path to achieving annual records will likely be through diversification, especially in consumer-oriented products. The strong trade relationship and consumer trust in U.S. products built over decades can be an important asset for exporters.

The Philippines boasts one of the world’s fastest growing economies, a young and growing population, and a steadily rising number of high-income households. Gross domestic product growth averaged 6.4 percent between 2010 and 2019, making the Philippines the 19th fastest growing economy in the world during that period.1 Quarantine measures and global disruptions due to the COVID-19 pandemic caused the Philippine economy to contract by 10 percent in 2020, but 5.7 percent growth in 2021 and projected 6.7 percent growth in 2022 are signs of strong recovery.2 Within the next few years, the Philippines is expected to become an upper-middle-income economy, currently defined by the World Bank as having a gross national income per capita between $4,096 and $12,695. 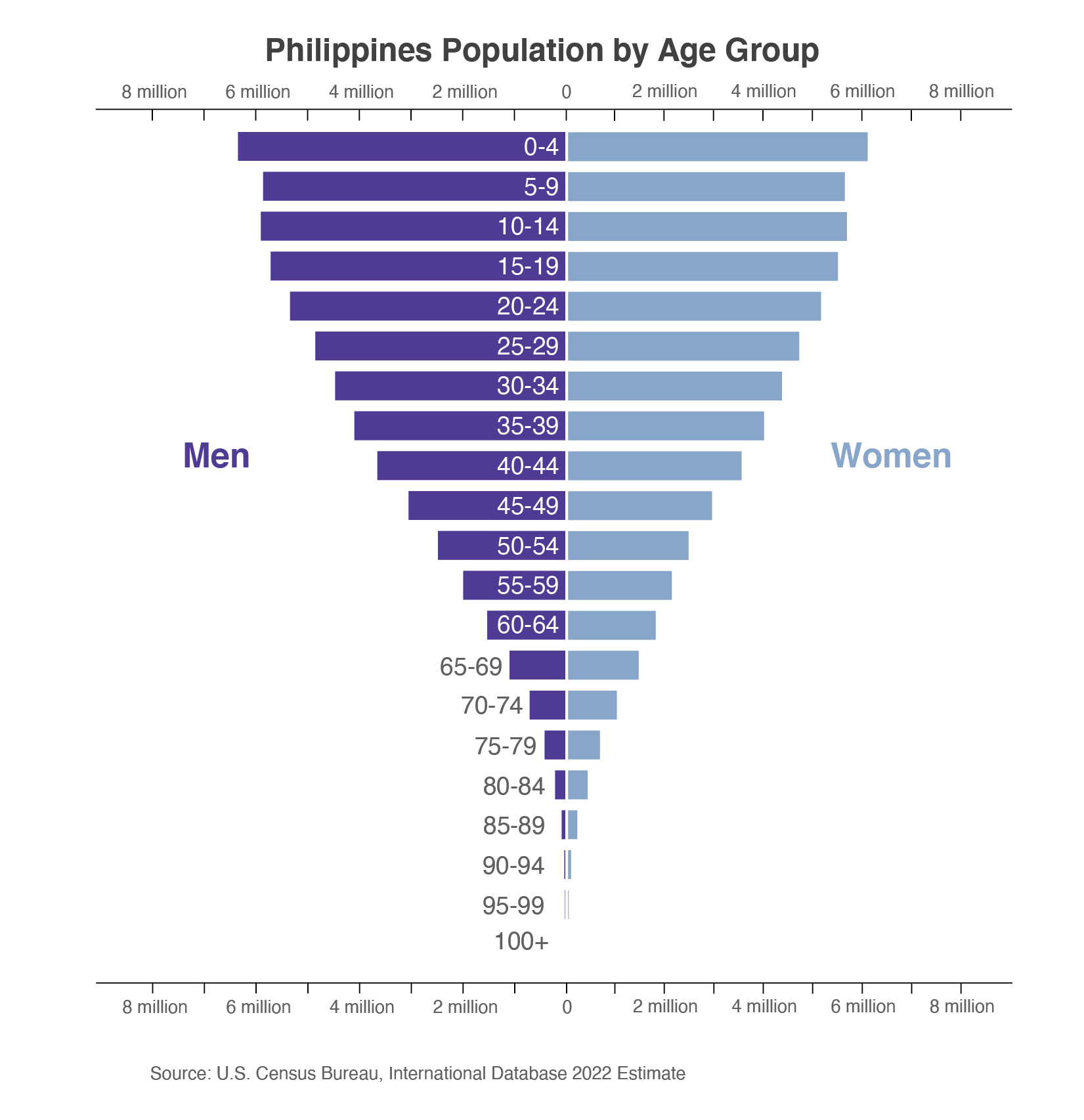 The Philippines is the 12th most populous country in the world at nearly 115 million people in 2022.3 Population growth has been moderately high in recent years, averaging 1.6 percent annually between 2010 and 2019. This is higher than the world average of 1.2 percent annually, and notably higher than most other large population countries, which tend to have lower growth rates. The Philippines also has a particularly young population, with a median age of 24.1 compared to the world median of 31 and the U.S. median of 38.5 in 2022. More than half of the country’s population is under the age of 25.

The Philippines has experienced high household income growth in recent years, and this trend is expected to continue. The number of households with annual income more than $20,000 (an indicator of households that likely have access to and can afford imported food) increased by 68 percent between 2010 and 2019 to 2.8 million. IHS Markit projects that the number of households in this income group will reach 4.6 million by 2030.

The size of the overall food and beverage sector in the Philippines has grown significantly in the past decade. IHS Markit estimates that food and beverage sales were around $124 billion in 2021, double the $61 billion in sales in 2010. Sector sales are forecast to increase nearly 90 percent by 2030 to $234 billion. Population and household income growth are important contributors, increasing total consumption as well as the variety and quality of foods that are consumed. Recent trends show interest in premium ingredients and healthier options. Other factors, most recently the COVID-19 pandemic, have affected the types of foods people eat and the way they buy them. 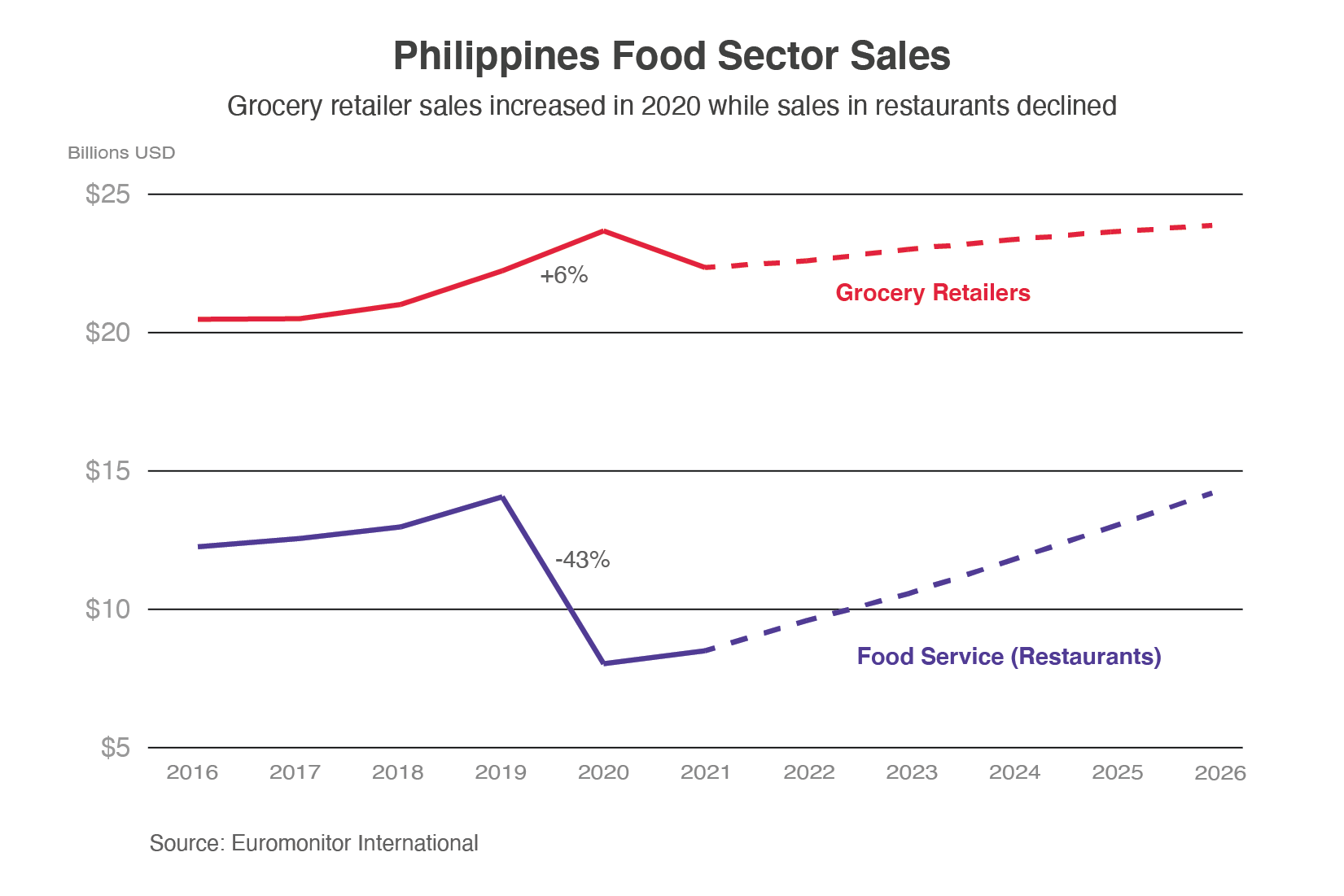 COVID-19 related restrictions in 2020 required consumers to eat out at restaurants less frequently, and instead eat their meals at home. Between 2019 and 2020, food service sales (which include restaurants, cafes, bars, and street stalls) in the Philippines declined by 43 percent from $14.1 billion to $8 billion.4 During the same period, grocery retailer sales growth accelerated to 6 percent, increasing from $22.2 billion to $23.7 billion. Grocery retailer sales slowed in 2021, returning to the pre-pandemic trend. The food service industry is not expected to recover until 2024.5

One of the most notable recent trends in worldwide food and beverage consumption is the rise of e-commerce. While the trend originated as a reaction to the COVID-19 pandemic, it is likely that many consumers will continue to shop for groceries online for convenience, facilitated by the increased online presence of many retailers in the last few years. Philippine food and drink e-commerce sales have grown significantly, rising from around $2 million in 2018 to $751 million in 2021. Euromonitor forecasts that e-commerce sales in the country will be more than $1 billion in 2022 and will continue to rise in the coming years, although it should be noted that this is still a very small percentage of the total food and beverage sector sales.

The Philippines was the eighth largest market for U.S. agricultural exports in 2021, reaching a record $3.5 billion.

Top 10 U.S. Agricultural Exports to the Philippines (Values in millions of dollars)

Exports increased 11 percent over 2020, surpassing Vietnam, and making the Philippines the top market for U.S. products in Southeast Asia for the first time since 2015. Despite tariff and logistical disadvantages, the United States has long been the top supplier of agricultural products to the Philippines, compared to neighboring suppliers in Asia. In 2021, imports from the United States, with 21 percent of the market, were nearly double those from Indonesia, the next largest supplier.

Consumer-oriented products were the largest category of U.S. agricultural products exported to the Philippines in 2021 at $1.4 billion, a 23-percent increase over 2020. The Philippines has been the top Southeast Asian destination for U.S. consumer-oriented products since 2006. Top products in this category include dairy products ($437 million), pork and pork products ($204 million), and poultry meat and products ($147 million, excluding eggs). Year-over-year growth was particularly strong for U.S. meat and poultry products, with pork exports growing by $90 million and poultry exports growing by $83 million. Meat and poultry product exports have increased significantly in recent years to make up for shortfalls in domestic pork production related to African swine fever. Pork exports benefitted from temporarily lower tariffs and larger quota volumes, while demand increased for substitute proteins like poultry.

Intermediate products were the second largest category of U.S. agricultural products exported to the Philippines in 2021 at $1.2 billion, a 4-percent increase over 2020. Top products in this category include soybean meal ($960 million); miscellaneous feeds, meals, and fodders ($86 million); and ethanol ($51 million). As soybean meal is a large proportion of intermediate products exported, its $60 million year-over-year growth accounts for much of the category’s overall growth in 2021.

Bulk products were the third largest category of U.S. agricultural products exported to the Philippines in 2021 at $1 billion, a 4-percent increase over 2020. Top products in this category include wheat ($871 million), soybeans ($65 million), and pulses ($10 million). More than 90 percent of bulk exports to the Philippines in 2021 were wheat, which increased by $44 million from 2020.  Around half of the Philippines’ wheat demand is for bread production, making them an outlier in Southeast Asia where wheat is more commonly used to make noodles. United States exports hold more than 90-percent market share for milling wheat in the Philippines, although other countries supply significant volumes of feed wheat.

Soybean meal and wheat have long been the United States’ top exported agricultural products to the Philippines and in 2021 accounted for just more than half of all exports. They will likely remain top performers for many years. However, exports of consumer-oriented products have a high potential for growth:

The Philippines is a member of the Association of Southeast Asian Nations (ASEAN) and is thus part of the ASEAN Free Trade Area along with its neighbors Brunei, Cambodia, Indonesia, Laos, Malaysia, Burma, Singapore, Thailand, and Vietnam. As part of ASEAN, it also has free trade agreements with Australia, China, India, Japan, New Zealand, and South Korea. The Philippines has only one bilateral free trade agreement, the Philippines-Japan Economic Partnership Agreement. The Philippines is a member of the World Trade Organization, so its most-favored nation tariff rates are applied to imports from the United States.

Philippine food regulations generally follow the recommendations of the three international standard-setting bodies. However, Philippine authorities have increasingly established restrictive conditions to limit imports of politically sensitive agricultural commodities, such as rice, corn and its substitutes, poultry, pork, and fishery products. The main regulatory bodies monitoring the safety and quality aspects of imported agriculture and food products are the Department of Health’s Food and Drug Administration and the Department of Agriculture’s Bureau of Animal Industry, Bureau of Fisheries and Aquatic Resources, and Bureau of Plant Industry.