China’s bakery sector has been expanding rapidly in recent years, underpinned by the country’s rising middle class, ongoing Westernization of lifestyles and diets, and increasing demand for convenient food options. Euromonitor International estimates retail sales of baked goods (packaged and unpackaged) in China at $34 billion in 2020, comprising 9 percent of global retail sales. This makes China the world’s second-largest baked goods retail market after the United States (at $67 billion).
Furthermore, the growth potential for China’s bakery sector is unparalleled, given the country’s population and relatively low consumption base. Per capita consumption of baked products is currently 7.2 kilograms (kg) per year, compared to 22.5 kg in Japan, and 40.2 kg in the United States.1 Euromonitor International forecasts that retail sales of baked goods in China will grow to $53 billion by 2025, a 53-percent jump from current levels. 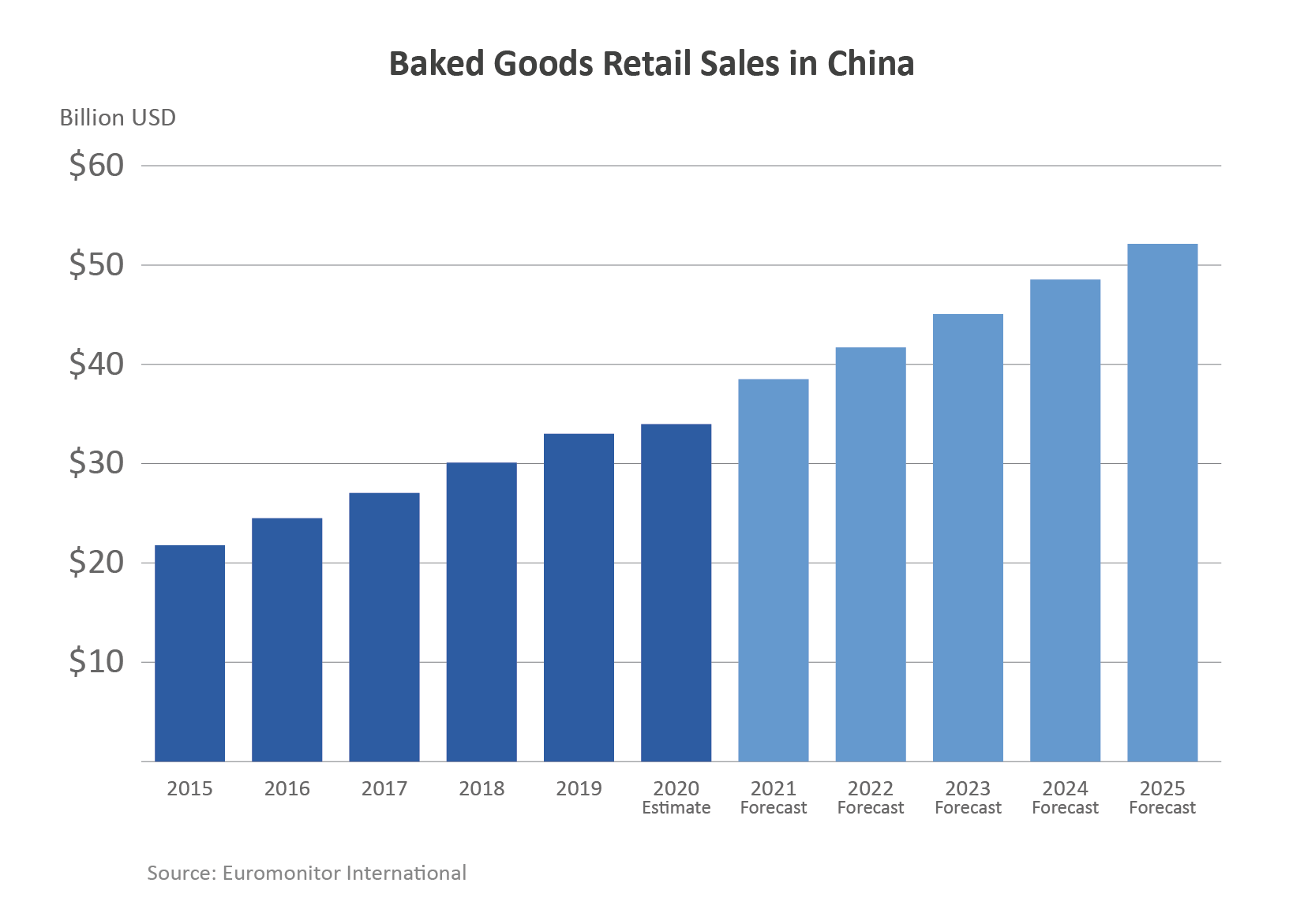 Rising consumer incomes and an increasingly Western lifestyle in Chinese cities, combined with growing variety and expanding presence in retail outlets such as supermarkets and hypermarkets, have supported the retail performance of baked products across the country. Moreover, Western-style pastries are competing with traditional Chinese varieties and are becoming a daily food item for many middle-class urban consumers.

Breakfast, snacks, and celebrations are the main occasions for baked goods consumption in China, with the most popular products being cakes, pastries, and bread. The consumer demographics skew female and young: about 65 percent of Chinese consumers of baked products are women, and more than 80 percent are born after 1980, according to Daxue Consulting.

Cakes currently account for 41 percent of overall baked goods retail sales in China, with an annual value of $14 billion). According to Euromonitor International, retail sales of cake saw a compound annual growth rate (CAGR) of 8.3 percent from 2015-2020 and are expected to remain at a similar level over the next five years. The bakery market remains highly fragmented. Most of the almost 600,000 bakeries in China are local businesses, with e-commerce gaining market share as rising rent and labor costs have led many bakers to close their physical shops.1

Visually appeal and flavor variety are important to Chinese consumers. Among the businesses meeting that demand is Bliss Cake, one of China’s fastest-growing bakery chains, which offers an exclusive e-commerce platform and markets a signature cake with multiple slices featuring different flavors such as chocolate mousse, fresh fruit, cheesecake, and coconut.1 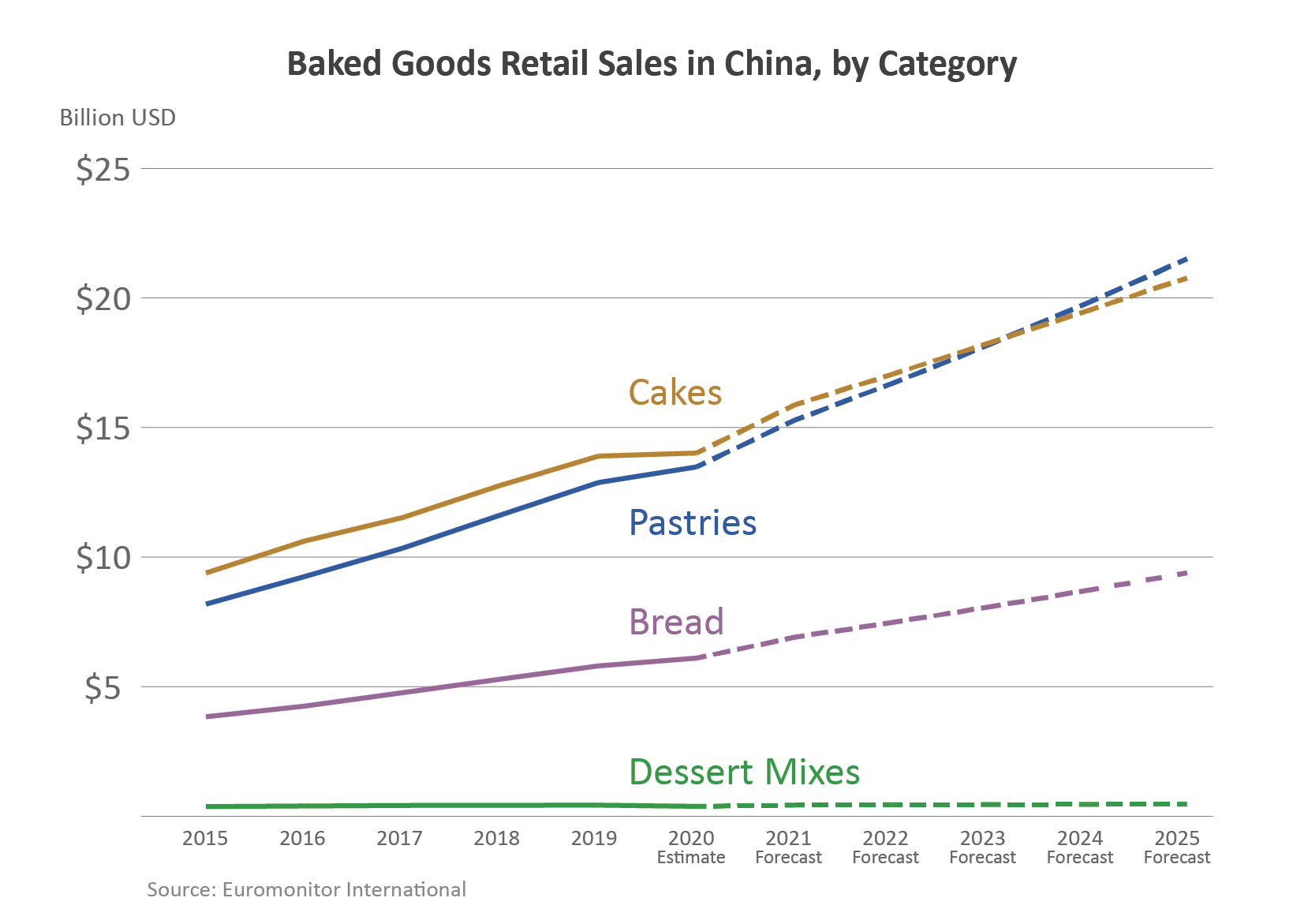 Pastries, which Euromonitor categorizes as including fresh and packaged biscuits, cookies, croissants, donuts, and others, comprise 40 percent of bakery sales ($13 billion annually). Pastries are the fastest-growing category of baked goods in China, with a CAGR of 10.5 percent during 2015-2020, and are expected to overtake cakes in bakery sales in 2024. Filled biscuits have become very popular among white-collar workers in large cities, who are keen to experiment with new products offering indulgence and convenient snack options. Diversity in flavors and product innovations help expand demand for these products, as localizing flavors to target market preferences is important.

Take, for example, the world-famous Oreo cookie. When the century-old, black-and-white cookie was first introduced in China in 1996, sales were only mediocre. By surveying Chinese consumers, Oreo’s manufacturer found they preferred a cookie with less bitterness and less sweetness. As a result, the company revamped its recipe for the Chinese market to make the biscuit part more chocolatey and the cream less sweet. Other innovations followed, including green tea flavored cream, Oreos in rectangular wafer form, and straw-shaped wafers with vanilla-flavored cream. As a result, Oreos are now one of the best-selling cookies in China2.

Bread (predominantly leavened bread sold both packaged and unpackaged) accounts for 18 percent of Chinese bakery sales (valued at $6 billion), having maintained a 9-percent CAGR during 2015-2020. It has become a popular breakfast or snack item for young urban consumers. Euromonitor research found that increased fresh milk intake goes hand in hand with higher bread consumption, as more Chinese consumers think that bread is a better complement to milk than traditional breakfast items such as rice porridge and meat buns. Unlike traditional breakfast, milk and bread require minimal preparation, thereby making them attractive to a large class of office workers who seek convenience due to the fast pace of daily life. Whole wheat sandwich and white bread are the two most popular varieties, as Chinese consumers generally prefer soft, springy bread products over harder ones such as bagels and baguettes. Whole wheat bread is also perceived to be a healthy product and thus is popular among the health-conscious elderly and young female consumers. Flavored varieties such as green tea or fruit breads are also performing well, especially among children and teenagers.

Impact and Recovery from the COVID-19 Pandemic

The COVID-19 pandemic has negatively affected the Chinese bakery sector via disruptions to production and distribution. Having largely maintained double-digit annual growth in the preceding decade, the baked goods retail sector is expected to grow just 3 percent in 2020 according to Euromonitor. Both packaged and unpackaged baked goods have suffered, though the unpackaged segment has been hit harder due to shorter shelf life, consumers’ limited access to retail outlets, and increased concerns about food hygiene during the pandemic. Cake sales have been hit especially hard by the disappearance of large celebrations during quarantine and social distancing measures. Bread has fared better than other baked goods categories because of its staple status and diverse range of potential uses, including being a breakfast option. Bread sales have also benefited from the increase in at-home meal consumption.

E-commerce, already on the rise before the pandemic, has gained more market share in 2020 due to minimized social contact, general convenience, and more competitive pricing. Baked goods sales are expected to have a strong recovery, with Euromonitor forecasting a 13.3-percent increase in 2021 and healthy growth thereafter. Well-suited to snacking, baked goods provide convenient options for urban consumers with increasingly hectic lives that may not leave time for more formal meals. In this regard, pastries and bread are well-positioned for future growth.

FAS China has identified several products used as baking ingredients with good growth potential: butter, tree nuts, and dried and processed fruits. Chinese food processors prefer to use imported butter, as domestic production is limited by seasonality and high cost. Butter is consumed and marketed primarily by the bakery sector. Female consumers aged 26-40, accounting for 94 percent of the home baking population, are strong drivers for butter consumption. Home baking has been gaining popularity in recent years. Although most Chinese kitchens are not equipped with large ovens that are common in the United States, many households use countertop toaster ovens for baking. During the first half of 2020, sales of countertop ovens grew 18 percent over the same period in the previous year according to All View Cloud Data Technology. FAS Beijing forecasts a 17-percent increase of butter imports in 2021 based on the rapidly developing bakery industry and its reliance on imported butter. (For more information see the FAS report China: Dairy and Products Annual 2020.)

Imported tree nuts are also used in the Chinese baking industry. The bakery sector commonly uses U.S. almonds, walnuts, pecans, and pistachios as ingredients in bread, cakes, cookies, and other pastries. The Mid-Autumn Festival, which falls between mid-September to early October and is the second-most important Chinese holiday after the Lunar New Year, is peak season for sales of moon cakes. In 2019, sales of these dense, filled pastries reached $2.8 billion. In recent years, the fillings have become more innovative  and tree nuts have become a trendy option. U.S. tree nut producers could consider research and development cooperation with moon cake producers to expand this seasonal trend in China. (For more information, see the FAS report China: Tree Nuts Annual 2020.)

Frozen/dried fruits, such as blueberries, cranberries, and tart cherries have great potential due to the specific attributes of U.S. varieties. While China can source fresh blueberries from Chile and Peru, U.S. blueberries have a higher sugar content and softer skin, which are sought after by food processors. (For more information, see the FAS report China: Food Processing Ingredients.) Raisins are also used as an ingredient in food processing and   rapid development of the bakery sector has helped drive raisin consumption.