With a population of 51 million and a growing middle class, South Korea continues to be one of the top destinations for U.S. agricultural goods, ranking as the United States’ sixth-largest market in 2016. The United States is South Korea’s top agricultural supplier, providing 28 percent of the country’s farm imports.

When KORUS took effect in 2012, many tariffs immediately fell to zero while the phase-out of others began. For many U.S. exports – including prepared foods, fresh fruits, and distillers grains – the benefits were seen immediately. For instance:

Benefits Continue to Grow as Tariffs Phase Out

Due to the cyclical nature of agriculture and its susceptibility to climatic events, pests and disease, U.S. agricultural exports to South Korea got off to a slow start in the early years of KORUS. The United States’ two largest exports, corn and beef, declined in the initial years of implementation for reasons unrelated to the agreement. U.S. corn production suffered from the historic 2012-13 drought and, as a result, U.S. corn exports to the world fell from 45 million metric tons (MMT) in 2011 to 23 MMT in 2013. After U.S. corn production and exports recovered, U.S. corn regained its competitive edge in South Korea as well, with exports rising 40 percent, from 3.4 MMT in 2015 to 4.8 MMT in 2016. U.S. corn exports to Korea were valued at $865 million in 2016. Despite improvement in corn exports to Korea, the United States is facing strong competition from South American countries that have had record harvests in recent years. 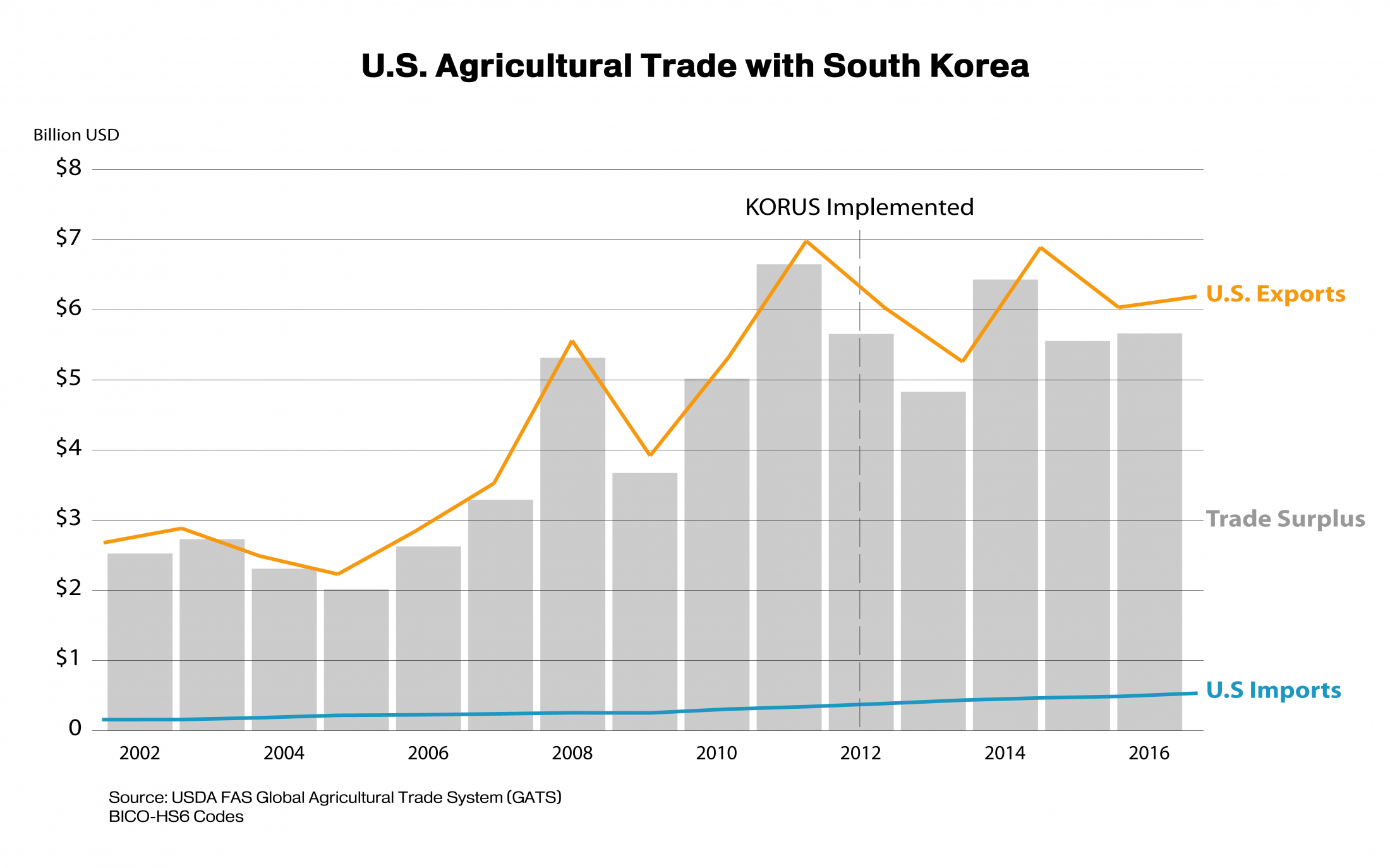 South Korea remains a significant and expanding market for many U.S. agricultural exports. For example:

Looking Forward: Korea Has 15 FTAs and Is Negotiating More

Since the conclusion of the Uruguay Round negotiations in 1994, South Korea has been actively pursuing free trade agreements (FTAs). To date, the country has FTAs in force with Chile, Singapore, the European Free Trade Association, the Association of Southeast Asian Nations (ASEAN), India, the European Union, Peru, the United States, Turkey, Australia, Canada, China, New Zealand, Vietnam, and Colombia. Currently, South Korea is revising its existing agreements with ASEAN, India, and Chile.

South Korea is also in negotiations for ten additional multilateral and bilateral FTAs: with the 16-country Regional Comprehensive Economic Partnership (or RCEP), economic integration with both China and with Japan, with a group of six countries in Central America, and with Japan, the Eurasian Economic Union, the Gulf Cooperation Council, Indonesia, Mexico, Ecuador, and Israel.

Even though South Korea has numerous FTAs in force, the United States still enjoys preferential treatment in the South Korean market. However, as Korea continues to sign new FTAs, the U.S. will lose much of the tariff advantage it currently enjoys. Without the KORUS agreement, the United States would face higher duties than many of its competitors.

In August 2017, USDA announced that South Korea lifted its ban on U.S. poultry after an outbreak of highly pathogenic avian influenza (HPAI) was reported in Tennessee in March 2017. South Korea has experienced several recent outbreaks of HPAI, increasing its reliance on imports to avoid market disruption. However, South Korea’s policy of placing nationwide bans on poultry coming from countries experiencing HPAI outbreaks has hampered U.S. exports to South Korea in recent years. U.S. chicken exports to South Korea dropped 89 percent between the 2014 and 2016 marketing years, from 64,937 metric tons (MT) to only 7,110 MT (link). For any future outbreaks, the United States has been working with South Korea to reach an agreement on HPAI regionalization. Regionalization would only prevent exports from a U.S. state with HPAI rather than the entire country. This agreement would ensure that U.S. poultry exports to South Korea remain uninterrupted.

The recent lifting of the ban provides an opportunity for increased U.S. exports. Further, poultry consumption in South Korea is expected to grow due to several upcoming international sporting events. The South Korean chicken industry reports a five-percent increase in chicken consumption during big sporting events both within and outside the country. Not only is South Korea hosting the winter Olympic Games in February 2018, but poultry consumption should also increase as Koreans spend time at home watching the men’s soccer World Cup in Russia in June 2018 and the Asian Games in Indonesia in August 2018.

Top U.S. agricultural exports to South Korea have benefited from the tariff reductions set by KORUS, giving U.S. exporters a competitive edge. For instance, U.S. beef and beef products faced a 40 percent tariff rate before KORUS, but that will gradually phase out over 15 years. In 2017, the current applicable tariff on U.S. beef is down to 24 percent (link). Meanwhile, Korea’s tariffs on Australian and Canadian beef are 29.3 percent and 32 percent, respectively. While Australia and Canada will also see their beef tariffs phased out, the United States has had a head start and will continue to have the lowest beef tariffs compared to Australia and Canada for a decade.

For fresh oranges, the United States maintains its dominant position with a favorable FTA duty rate of five percent in 2017. U.S. pork exports will continue to compete with EU pork in 2017, largely due to lower FTA tariff rates. The EU is the second-largest pork supplier to South Korea, after the United States. Other subcategories, such as poultry products, have different tariff reduction schedules. For example, South Korea’s 20-percent tariff on imports in the dominant frozen leg quarter category will be phased out by 2021. Additionally, tariffs on U.S. exports of frozen breasts and wings to South Korea will be eliminated by 2023.

Other exports, such as fresh cheese, fall under the tariff rate quota (TRQ) system. Currently, U.S. goods can enter South Korea duty-free up to the maximum volume permitted by the quota, with a duty charged on exports above the quota. However, based on the KORUS agreement, the tariff on U.S. fresh cheese will be phased out in 15 years and all U.S. cheese will enter South Korea duty-free by 2026.