South Korea is one of the most reliable export markets for U.S. agricultural goods. Its vibrant economy offers easy access to modern retail outlets and is home to a large urban population seeking convenient and healthy food products. Increasing wealth, a growing number of women in the workforce, and a younger generation seeking international foods are also contributing to the rise of convenience stores, bulk retail outlets, and western-style family restaurants.

With more than 51 million people, South Korea is the third most densely populated country in the world. More than 80 percent of Koreans live in urban areas and more than 50 percent live within, or in the direct vicinity of, the capital city of Seoul. Between 2012 and 2017, Korea’s GDP grew by a cumulative 25 percent and is expected to grow by 2.7 to 3 percent annually for the next five years. The country’s per capita gross domestic product (GDP) is $39,000 (adjusted for purchasing power parity), compared to $59,500 in the United States.

According to the United Nations Food and Agricultural Organization, 70 percent of Korea’s land is mountainous terrain, unsuitable for large-scale commercial farming. Moreover, the agricultural sector accounted for only 2.2 percent of the country’s 2017 GDP and is expected to remain a minor contributor to the economy. Given the dense population and land scarcity, Korea will remain dependent on imported food to feed its increasingly wealthy population.

The United States-Korea Free Trade Agreement (KORUS) entered into force on March 15, 2012, significantly increasing export opportunities for U.S. agriculture. Although full implementation of KORUS will take more than 20 years, the bilateral agreement provides U.S. producers the ability to expand sales of bulk, intermediate, and consumer-oriented agricultural exports with the elimination of duties on almost two-thirds of U.S. agricultural exports. Products such as wheat, corn, soybeans for crushing, whey for feed use, hides and skins, cotton, almonds, pistachios, orange juice, cherries, and wine previously faced duties as high as 487 percent, but under KORUS those duties are being phased out. Additionally, many other products gained increased access through duty-free tariff-rate quotas and tariff reductions, providing U.S. exporters preferential access over many competitors.

During 2012 and 2013, the first two years of KORUS, unusual agronomic conditions resulted in U.S. agricultural export declines to Korea, largely due to the two largest export categories: corn and beef. Corn normally comprises more than a quarter of U.S. agricultural exports to Korea, but the 2012 U.S. drought slashed this share to just 4 percent in 2013. Korean beef imports were abnormally large the two years prior to KORUS due to the worst outbreak of foot and mouth disease in Korean history. Beginning in 2014, Korea began repopulating its herds, which coupled with high U.S. beef prices, led to the volume of imports of U.S. beef reaching unusually low levels. Beef exports to Korea have since improved, increasing rapidly since 2014 and on pace to set a new record in 2018. 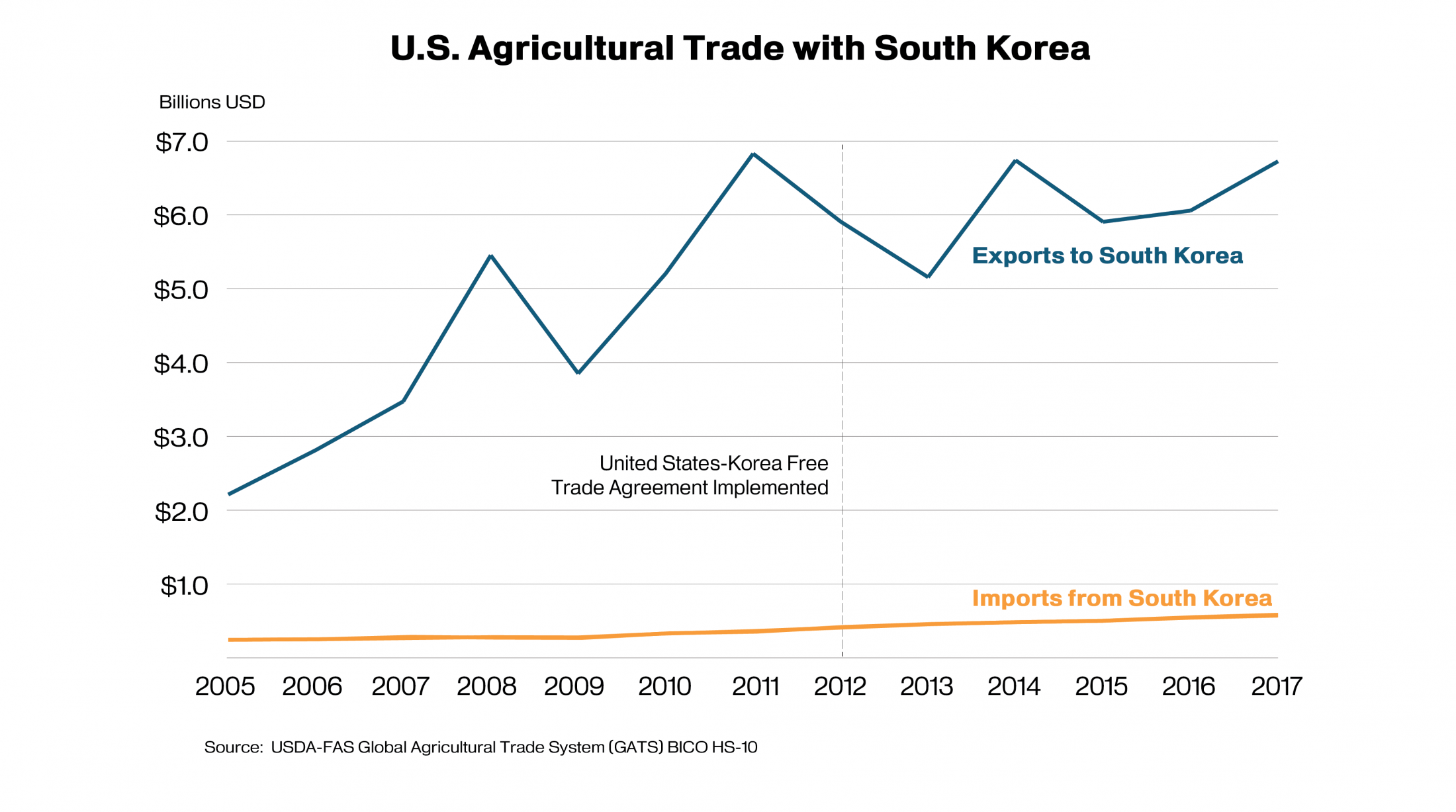 Despite increasing competition from other countries, the United States remains Korea’s top supplier. U.S. consumer-oriented products continue to meet increased Korean demand for better value, quality, and diversity in food options. Since the initiation of KORUS, U.S. consumer-oriented exports increased from 46 percent in 2012 to 56 percent in 2017 (as a percentage of agricultural products). U.S. intermediate agricultural exports remained stable at approximately $1.3 billion between 2012-2017, while the value of U.S. bulk exports to Korea fluctuated between $1.2 and $2.2 billion based on global market fluctuations.

Beef & Beef Products: The United States is the largest supplier of beef and beef products to Korea. In 2017, shipments totaled $1.2 billion, making up 51 percent of the country’s total beef imports. Strong demand for U.S. beef is largely due to U.S. marketing and promotion efforts, coupled with a drought-related shortage of Australian beef. Shortfalls in Korean beef production may pave the way for increased U.S. sales in 2018, and U.S. beef’s price competitiveness, along with lower duties under KORUS, will enhance export opportunities in the second half of 2018.

Corn: Despite increased competition from Brazil and Argentina, the United States is the top supplier in the Korean corn market. Exports of U.S. corn to Korea totaled $705 million in 2017 and the United States held a 48-percent market share. Brazil and Argentina held 15-percent and 13-percent market shares, respectively, during the same period. Korean imports of corn are poised for growth due to the increase in domestic swine and poultry inventories.

Fresh Fruit: Since 2012, Korea has been the largest export market (by value) for U.S. oranges, accounting for more than a third of all U.S. exports. U.S. fresh orange exports were valued at $226 million in 2017, accounting for 46 percent of all U.S. fresh fruit exports to Korea. U.S. oranges are expected to maintain their market dominance in Korea due to favorable duty rates from KORUS. The United States is also the top supplier of fresh cherries to Korea, with exports increasing 30 percent last year, from $114 million in 2016 to $149 million in 2017. Overall, U.S. fresh fruit exports to Korea increased 26 percent between 2016 and 2017, from $389 million to $490 million. As Korean importers aggressively market U.S. fresh fruit, street vendors, cooking contests, and recipes, sales are expected to continue to grow throughout 2018.

Pork & Pork Products: The United States is the second-largest supplier of pork to South Korea after the EU. As a result of competitive prices, U.S. pork held a 28-percent market share in 2017. Although Korean pork imports are forecasted to decline due to an increase in domestic supply, the United States should be able to maintain its market share thanks to the projected appreciation of Korea’s currency, the Won, against the U.S. dollar, along with duty-free access and relatively low U.S. pork prices (GAIN).

Several factors are helping generate continued export opportunities for American products in Korea. Strong business and social ties between Korea and the United States encourage positive opinions of new American products and consumption trends. Korea has a favorable business environment and is a highly competitive economy, thanks to well-developed physical and digital infrastructure. Robust economic performance and reduced geopolitical tensions with North Korea are driving expectations that the Korean Won will remain stable in the coming years.

However, as an export-oriented economy, Korea has also pursued free trade agreements (FTAs) with key partners in the region. Apart from existing FTAs with the ASEAN countries, the EU, India and Singapore, Korea has concluded FTAs with Canada, China, New Zealand, Vietnam and Colombia, and is currently negotiating additional FTAs with Israel, Ecuador and Chile. As a result, long-term export prospects are strong, but the United States will continue to face stiff competition.