Specialists from the USDA Foreign Agricultural Service traveled to Kyiv in early April to conduct interviews with agricultural officials and private commodity analysts in order to assess Ukrainian crop-production prospects for 2014. The observations of local specialists were consistent with USDA analysis indicating that winter-crop conditions were better than average as of late April. The current unrest in Ukraine is unlikely to have a significant impact on spring sowing and total spring-crop area, but the 40-percent drop in the value of Ukraine’s currency (the hryvna, or UAH) since the beginning of the year has boosted the cost of essential agricultural inputs, including fuel, mineral fertilizers, and plant-protection chemicals (herbicides, pesticides, and fungicides). The higher prices will likely reduce the application rates for fertilizers and chemicals and, as a result, yield prospects of both winter and spring crops could be negatively affected. Crop producers, however, are already implementing methods to cut costs and minimize the impact of the higher input prices. 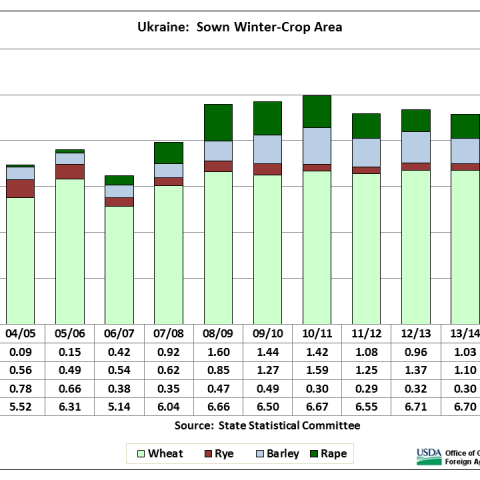 at 6.34 million hectares, down 5 percent from last season. Winter wheat accounts for about 95 percent of the country’s total wheat output. 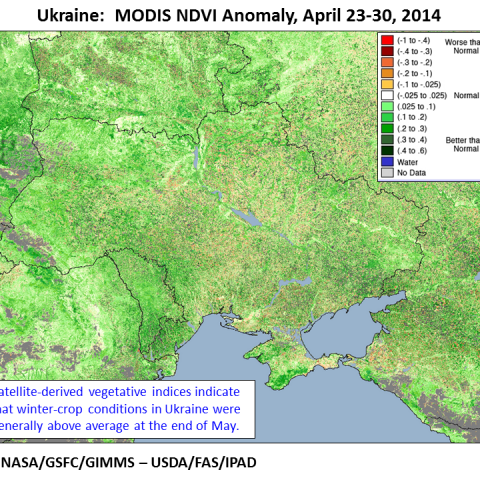 (NDVI) indicate that overall conditions for 2014/15 winter crops are 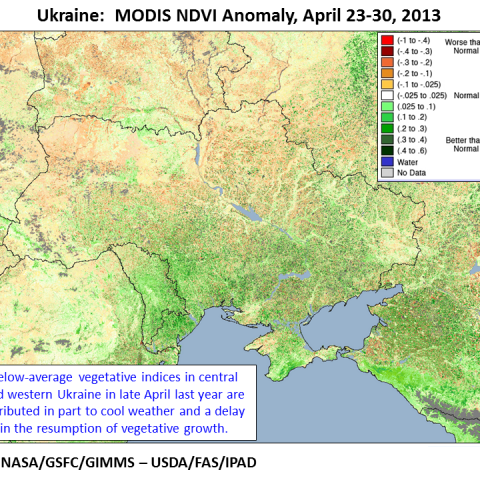 and better than average. Moreover, NDVI for the territories in southern and eastern Ukraine indicate the best crop conditions to date since 2008. The Hydromet Center of Ukraine rated winter-grain conditions as very good in mid-April due in large part to favorable fall establishment conditions and low winter losses. Private commodity analysts report that increasing prices for mineral fertilizer will likely reduce spring application rates. Many grain and oilseed producers, however, have already applied mineral fertilizer to winter-wheat fields as a routine part of fall field work. High prices will have an impact on the use of imported plant-protection chemicals as well, but many producers purchase chemicals during the winter months or already had materials in reserve. The USDA forecasts 2014/15 Ukraine wheat production at 20.0 million tons against 22.3 million last year. Harvested area is estimated at 6.3 million hectares, down 0.3 million from last year. Yield is forecast at 3.17 metric tons per hectare (MT/Ha), down 6.4 percent from last year and 3.6 percent below the 5-year average due to the likely reduction in the application of mineral fertilizers and the use of plant-protection chemicals. Harvest typically begins in early July and is largely complete by the end of the month.

The sowing of early spring grains (chiefly barley but also including wheat, oats, and pulses) was completed at a remarkably rapid pace this season due to unusually warm and dry weather. About 90 percent of the early spring grains were in the ground by April 10, compared to only 35 percent last year. One advantage of planting barley is its low cost of production per hectare. Farmers can use saved seed (seed reserved from the previous year’s harvest) and the use of fertilizer and chemicals typically is lower than for other crops. Despite the relatively low production cost for barley and the escalating prices for most agricultural inputs this year, the reported sown area of spring barley decreased by 15 percent.  According to the Ministry of Agricultural Policy and Food, spring barley was planted on 1.94 million hectares compared to 2.28 million last year. Spring-barley area has been decreasing since 2009 due to its low profitability compared to other spring crops. The planted area for winter barley, meanwhile, has remained fairly stable in recent years. Winter barley can account for roughly 25 to 40 percent of Ukraine’s total barley production, depending on yield and the amount of winter losses. The USDA estimates harvested area for 2014/15 total barley at 3.0 million hectares, down 0.2 million from last year. Output is forecast at 7.0 million tons against 7.6 million for 2013/14. Barley typically is harvested throughout the month of July. 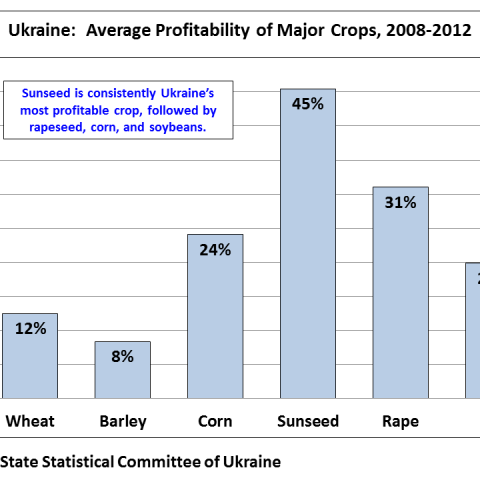 remains the chief factor driving spring planting decisions, as indicated by this year’s decrease in barley area. Although the sown area of individual crops may change from last year, planting-progress reports and sown-area projections from local observers suggest that Ukraine’s combined grain and oilseed area for 2014/15 will not decrease significantly from last year’s level. The USDA estimates that 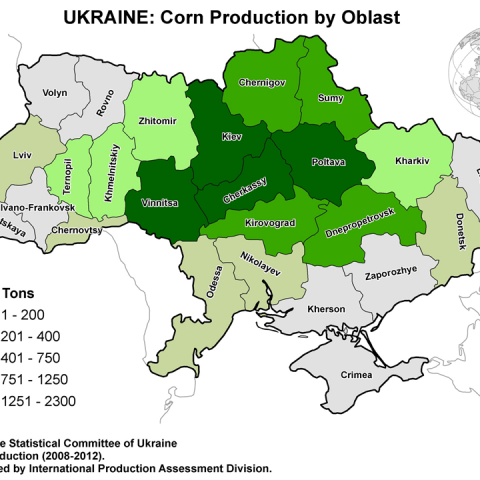 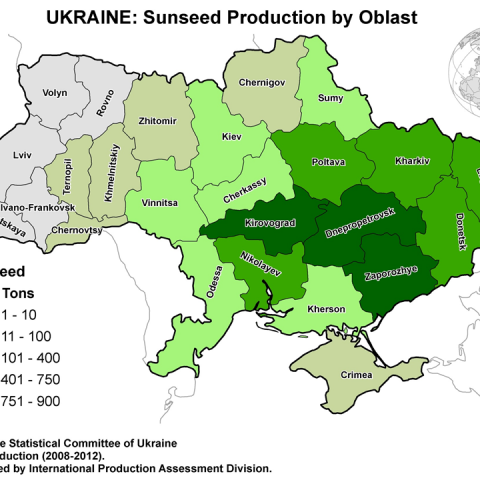 The increasing prices for agricultural inputs will influence field practices for winter crops and spring crops. Grain and oilseed producers will offset high fertilizer and chemical prices in a variety of ways. Many producers continue to purchase certified seed for both winter and spring crops but are buying an increasing share from domestic vendors rather than more expensive seed from large foreign companies. As an additional cost-saving measure, some producers purchase untreated seed (i.e., planting seed that has not already been treated with fungicides and other seed-protection chemicals) and then treat the seed themselves. Producers can also elect to use cheaper but lower-quality plant-protection chemicals, or inputs can be applied selectively, to only the fields with the highest yield potential. Fuel costs can be reduced by consolidating field operations; for example, liquid fertilizer and plant-protection chemicals can be applied at the same time in order to make fewer trips over the field. These practices are already being employed by a growing number of producers in an effort to achieve maximum economic yield rather than just high yield. A soybean producer in the Kyiv region reported that he has reduced the total cost of production by 23 percent, with no reduction in yield, simply by altering production methods. 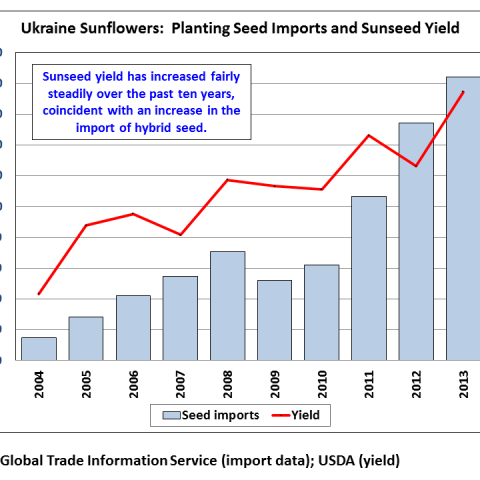 for sunflowers and corn – which has driven a significant increase in yield for both crops – is not expected to decrease significantly from last year’s level. Data from the Global Trade Information Service indicate that two-thirds to three-fourths of the corn and sunflower hybrid seed for the planting season is purchased by the end of March. According to a local specialist, purchases of corn-hybrid planting seed for the 2014 planting season were up by 50 percent from last year through February, and total corn-hybrid imports are expected to reach or surpass last year’s level.

The invaluable contribution of Yuliya Dubinyuk, agricultural specialist at the USDA Foreign Agricultural Service in Kyiv, is gratefully acknowledged. Production-distribution maps for major crops in Ukraine can be viewed at the Crop Explorer web site. Current USDA area and production estimates for other grains and oilseeds are available on FAS’ World Agricultural Production page, or at PSD Online.