USDA currently projects China’s 2014/15 corn production at 220.0 million tons, up 3.5 million tons from last year, based on higher area (36.8 million hectares).  The projected yield of 6.03 tons per hectare is equal to the yield in 2013/14 and below the long-term trend.  Although summer drought has affected local crop production, the national impact is not expected to be significant.  According to Chinese government statistics, the extent and financial impact of the current drought is actually smaller than average.

According to Chinese government sources, a drought has affected 2.3 million people, 2.5 million head of livestock, and about 5 million hectares of cropland in 12 provinces and regions this summer.  Drought conditions began to develop in June across Henan and intensified through July, just as corn and other summer crops were entering the critical reproduction/filling stage.  Henan province normally produces about 9 percent of China’s corn.  The adjacent provinces of Shaanxi, Hebei, Shandong, Hubei, and Anhui have also been affected by dryness to varying degrees.  Local sources report that corn yields are expected to be significantly lower than last year in the drought-impacted areas, and yields for other important crops may also be affected.

On July 25-26, tropical storm Matmo dumped more than 100 mm of rainfall along the coast of Shandong, providing valuable drought relief to part of the province.  Light to moderate showers on July 29 (10-25 mm) and again in the first week of August also brought limited drought relief to a few other parts of the North China Plain, but the amounts were not enough to eliminate the seasonal rainfall deficit or raise sub-soil moisture levels. 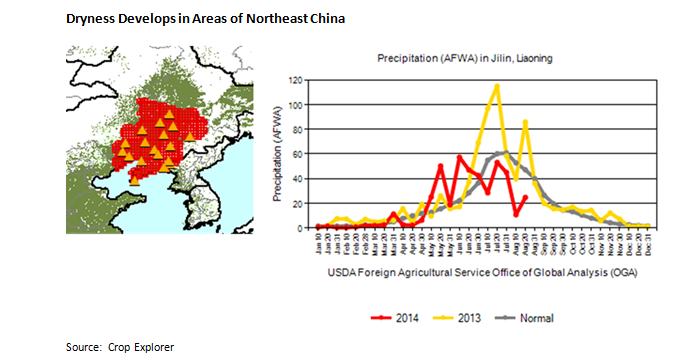 Since mid-July, the weather has become increasingly dry in the Northeast provinces of Liaoning, Inner Mongolia and Jilin, which together account for about 23 percent of China’s total corn area.  Chinese officials report that as of August 13, nearly 3 million hectares of crops in the three provinces were affected by drought, accounting for about 60 percent of China’s total drought-impacted cropland.  In Liaoning, total rainfall since July was reportedly the lowest since 1951, and the resulting dryness has impacted 2 million hectares of crops, mainly corn.   Much as with the North China Plain, many farmers in these regions also have access to irrigation, particularly for corn in Inner Mongolia.

The attached charts show cumulative rainfall from June 1 through August 10 (WMO station data) for several provinces, many impacted by prolonged dryness.  Average rainfall in Henan, one of the hardest-hit provinces, was only 160 mm (6 inches), or about 50 percent below normal and the lowest in at least 10 years.  Some Henan weather stations received less than 10 percent of normal rainfall for the period, although these stations were in the hilly and mountainous regions of central and western Henan, where agricultural production is limited.  About 60 percent of Henan’s cropland normally has access to irrigation, but this year many farmers reported that irrigation supplies were limited.  In other major growing areas in Northeast China, rainfall has been near normal for most of the summer, with drier weather beginning in mid-July (Rainfall Charts). 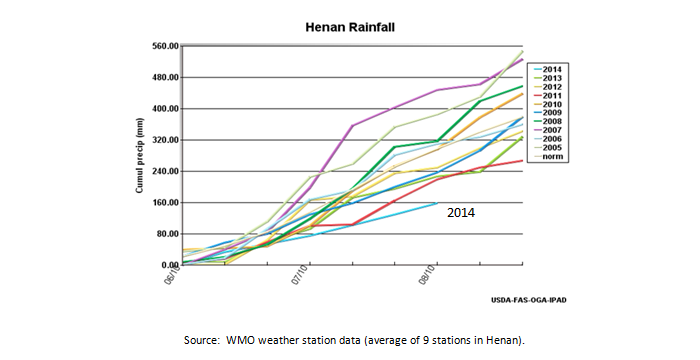 Average temperatures on the North China Plain and Northeast were seasonable this summer, exceeding optimal levels for only a short time in late July.  Temperatures have since moderated, reducing crop stress. 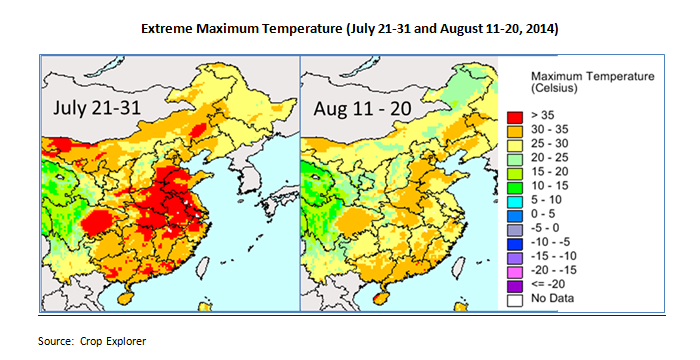 The impact of this summer’s below-normal rainfall on crop conditions in northern China can be seen on the map below.  Vegetation health, as indicated by satellite-derived vegetative indices (MODIS-NDVI) appears to be below average in parts of Henan and Hebei, while conditions are more mixed in Inner Mongolia and Liaoning provinces.   Major growing areas in northern Jilin, Heilongjiang, and adjoining areas of Inner Mongolia show better than average conditions (green=better than average, brown = worse than average). 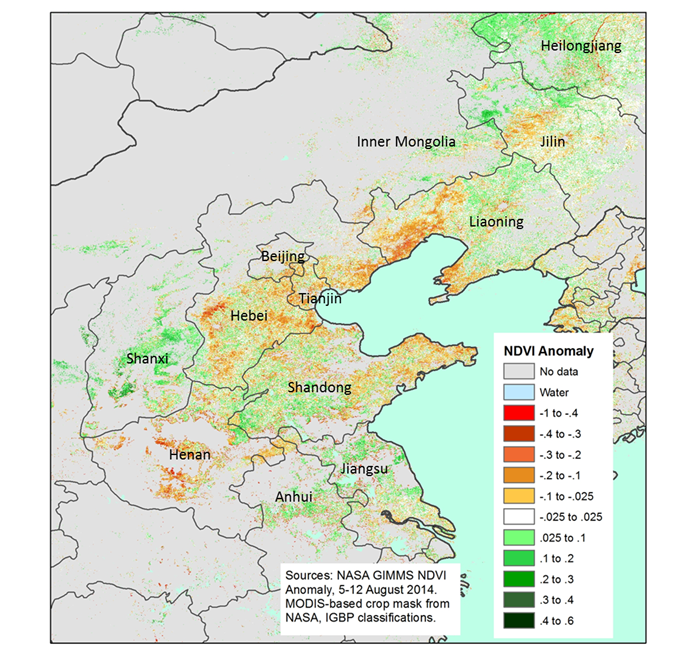 The next USDA production forecast will be released on September 11, 2014.

Peru Wheat Production Limited by Competition from Corn and Quinoa