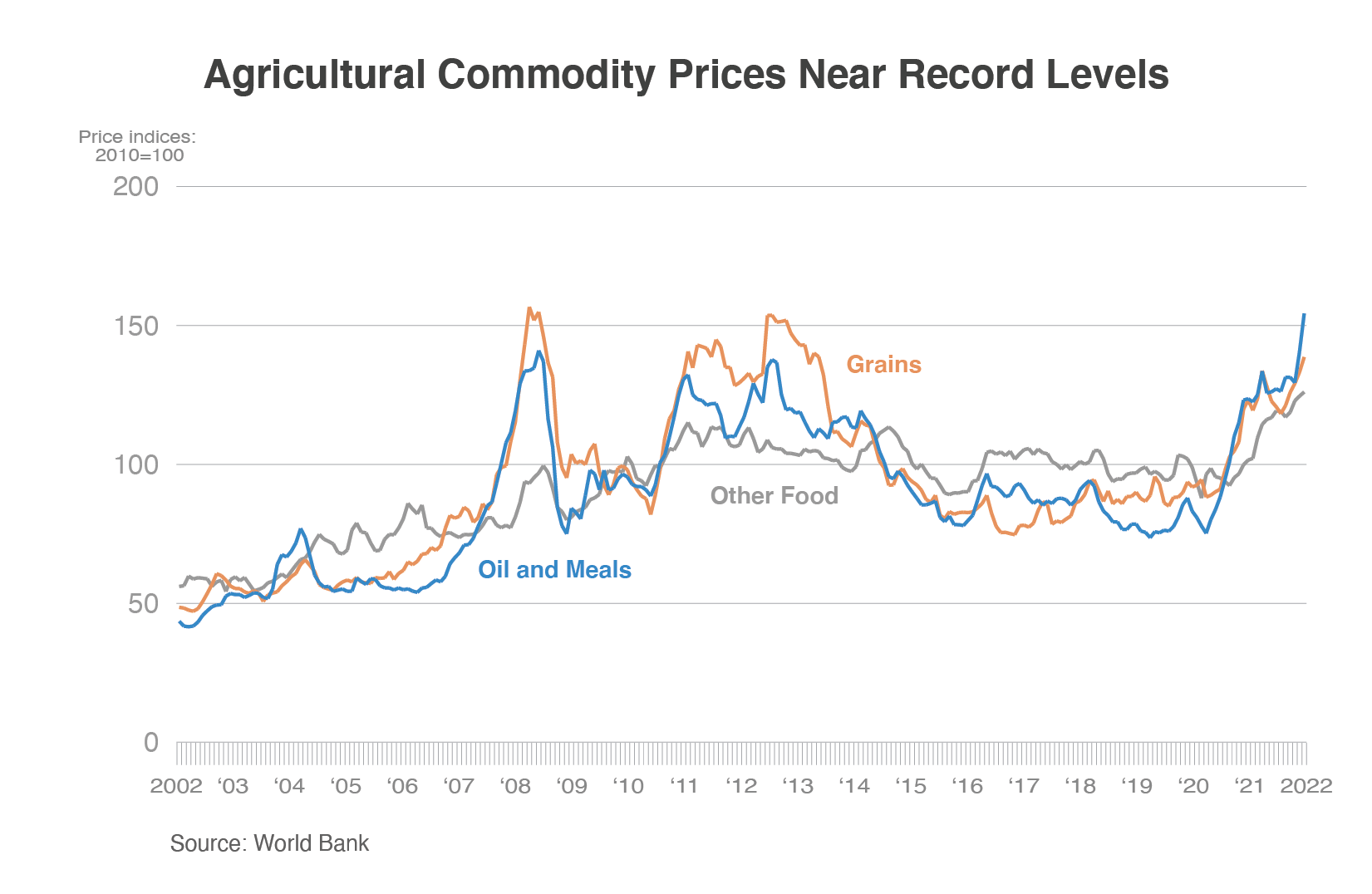 A number of factors have converged over the last 18 months to send global agricultural commodity prices to near-record levels. Russia’s invasion of Ukraine – and the potential loss of Ukrainian exports – was the latest development to push commodity prices higher. Other factors affecting global markets, which date back to late 2020, include: increased global demand, led by China; drought-reduced supplies; tightening wheat, corn, and soybean stocks in major exporting countries; high energy prices pushing up the costs of fertilizer, transportation, and agricultural production; and countries imposing export bans and restrictions, further tightening supplies.

As observed during the food price crises of 2008 and 2012, developing countries that are dependent on food imports are the most vulnerable to food insecurity. Such countries tend to respond to price signals by shifting consumption and trade patterns, while larger exporting nations respond by increasing production to meet demand. However, the geopolitical turmoil of a war between two major agricultural exporting countries, including the world’s largest fertilizer exporter (Russia), adds additional uncertainty and concern to today’s situation.

Reasons For Near Record Commodity Prices

Russia’s invasion of Ukraine comes at a time when global food and energy prices are already elevated. Over the last 18 months, wheat prices have risen nearly 110 percent, corn and vegetable oil prices are up 140 percent, and soybean prices are up 90 percent. Overall, agricultural commodity prices have been trending up since the second half of 2020, fueled by strong global import demand (especially from China), smaller world supplies due to Northern Hemisphere droughts in the summer of 2021, and tightening stocks in major exporting countries. These developments occurred as world economic growth rebounded from pandemic-curbing measures. Crude oil and natural gas prices began to surge, reflecting the economic recovery. High energy prices increased the costs of fertilizers, other inputs, and transportation. Russia’s attack on Ukraine has disrupted Black Sea agricultural exports, pushing prices higher, and exacerbating high energy and fertilizer costs. Trade policies in response to the market volatilities caused by the war, especially export restrictions, are further boosting food prices.

After pandemic-curbing measures around the world cut economic growth in 2020, global GDP rebounded sharply in 2021, spurring consumption and trade. According to the United Nations Conference on Trade and Development, global trade value reached a record $28.5 trillion in 2021, up 25 percent from 2020 and up 13 percent from 2019. China was the the first country to go into lockdown to stem the spread of Covid-19, and the first country to emerge and resume economic growth – as early as the second quarter of 2020 – which coincided with the recovery in the country’s swine sector from African Swine Fever. China’s agricultural imports soared during 2020 and 2021, up 54 percent compared to 2019, led by feedstuffs such as soybeans and corn. 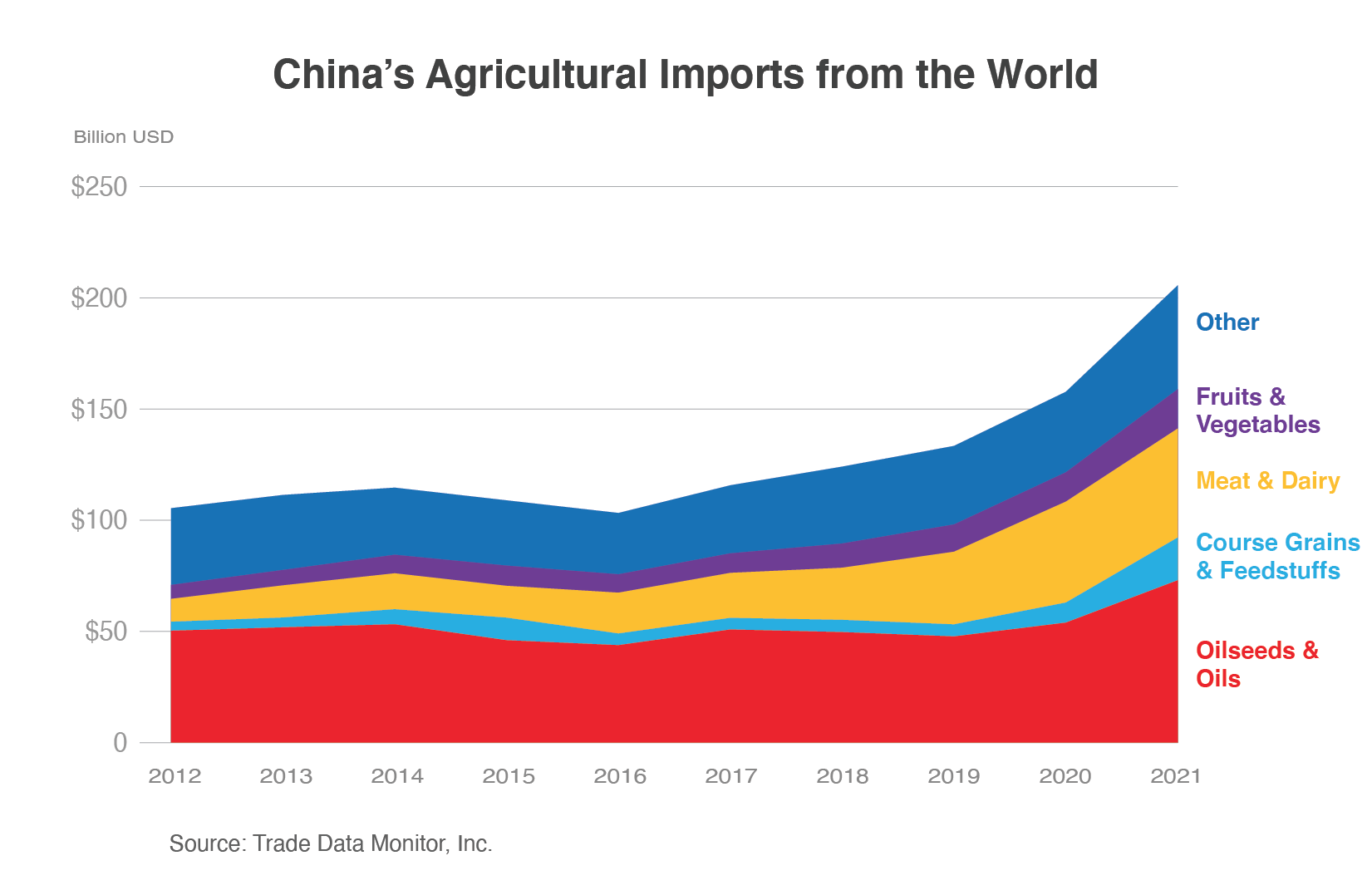 Global economic recovery precipitated rising demand for energy. Prices of crude oil and natural gas began to climb in late 2020, picking up steam in the second quarter of 2021. Natural gas prices rose sharply in mid-2021, as did the price of fertilizers, since natural gas is a key input in fertilizer production. The high cost of gas contributed to diminished fertilizer production in Europe and elsewhere.

Russia, Canada, China, and Belarus are the top four global exporters of fertilizer. In addition to rising energy costs, several other developments in these countries caused fertilizer prices to skyrocket. In November 2021, Russia introduced a six-month quota on exports of nitrogen fertilizers and complex nitrogen-containing fertilizers. Around the same time, China banned exports of phosphate, a major component of commercial fertilizers, until at least June 2022. Furthermore, a spike in ammonia prices and some potash supply disruptions in Canada also contributed to the rise in fertilizer costs. 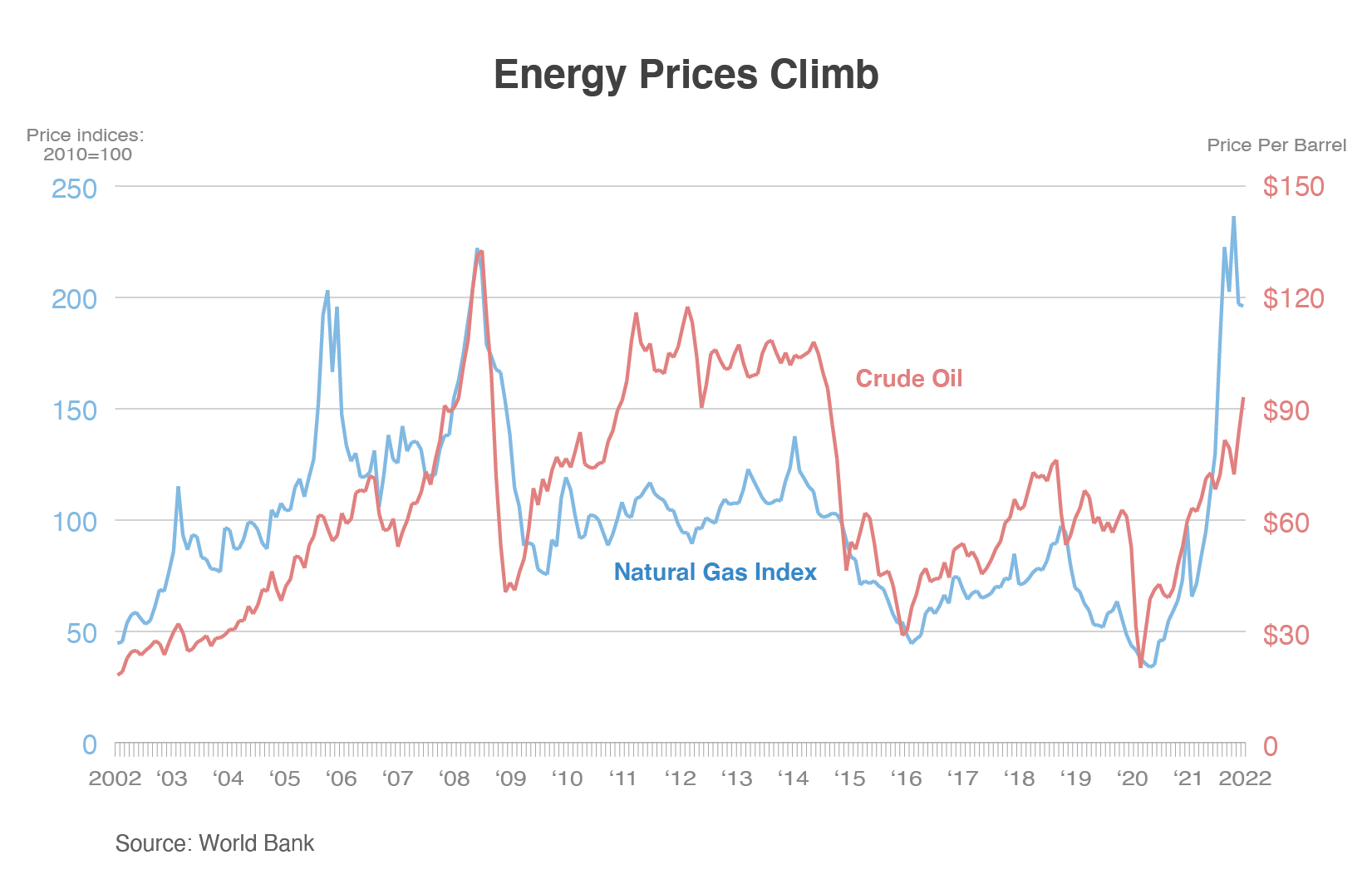 Strong trade demand and higher energy prices led to rising transportation cost and added to supply chain problems, which were themselves a product of uneven Covid economic recovery. Year-to-date (January-March 2022) Baltic Panamax index values, a benchmark for the price of moving dry bulk commodities by sea, are about triple the level they were during the same period in 2019. The supply chain issues that have reverberated globally go far beyond higher freight rates, however, as container shortages and widespread shipment delays cascade downstream through many sectors. In particular, interruption in shipments of computer chips and machine parts threatens farmers’ ability to maintain and run production equipment, while delays in shipping of fertilizer and other inputs could impact spring planting.

On an aggregate level, global wheat production has been adequate in 2020/21 and only one percent below consumption requirements in 2021/22. However, wheat stocks among major global exporters have tightened in recent years as international trade has grown. Major exporters’ stocks in 2021/22 are forecast to be at their lowest levels in 10 years, putting upward pressure on global prices. China is one of the leading countries ramping up imports, with import volume doubling in 2020/21 as State Trading Enterprises helped replace and rebuild aging government reserves and demand for feed-quality wheat also surged. 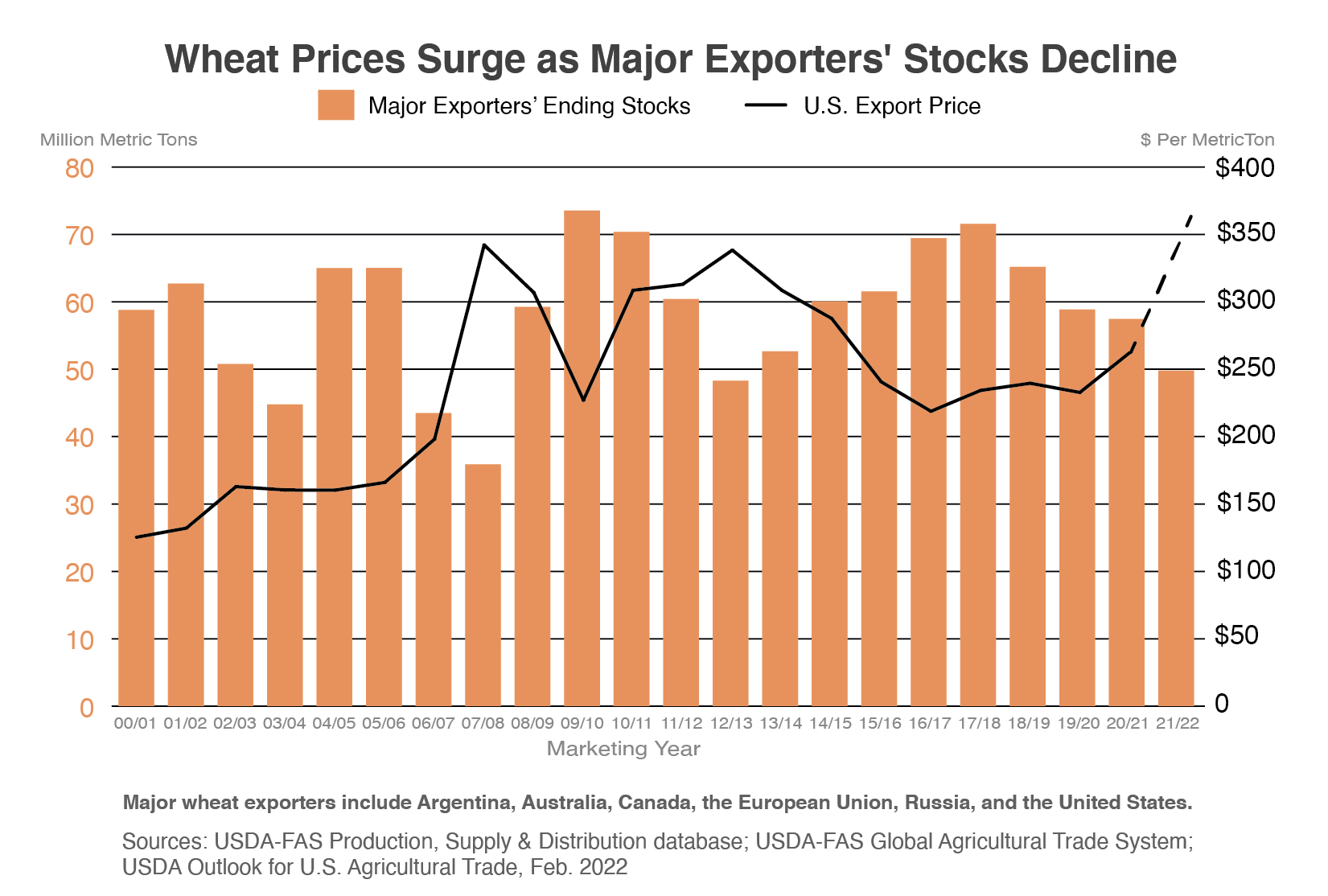 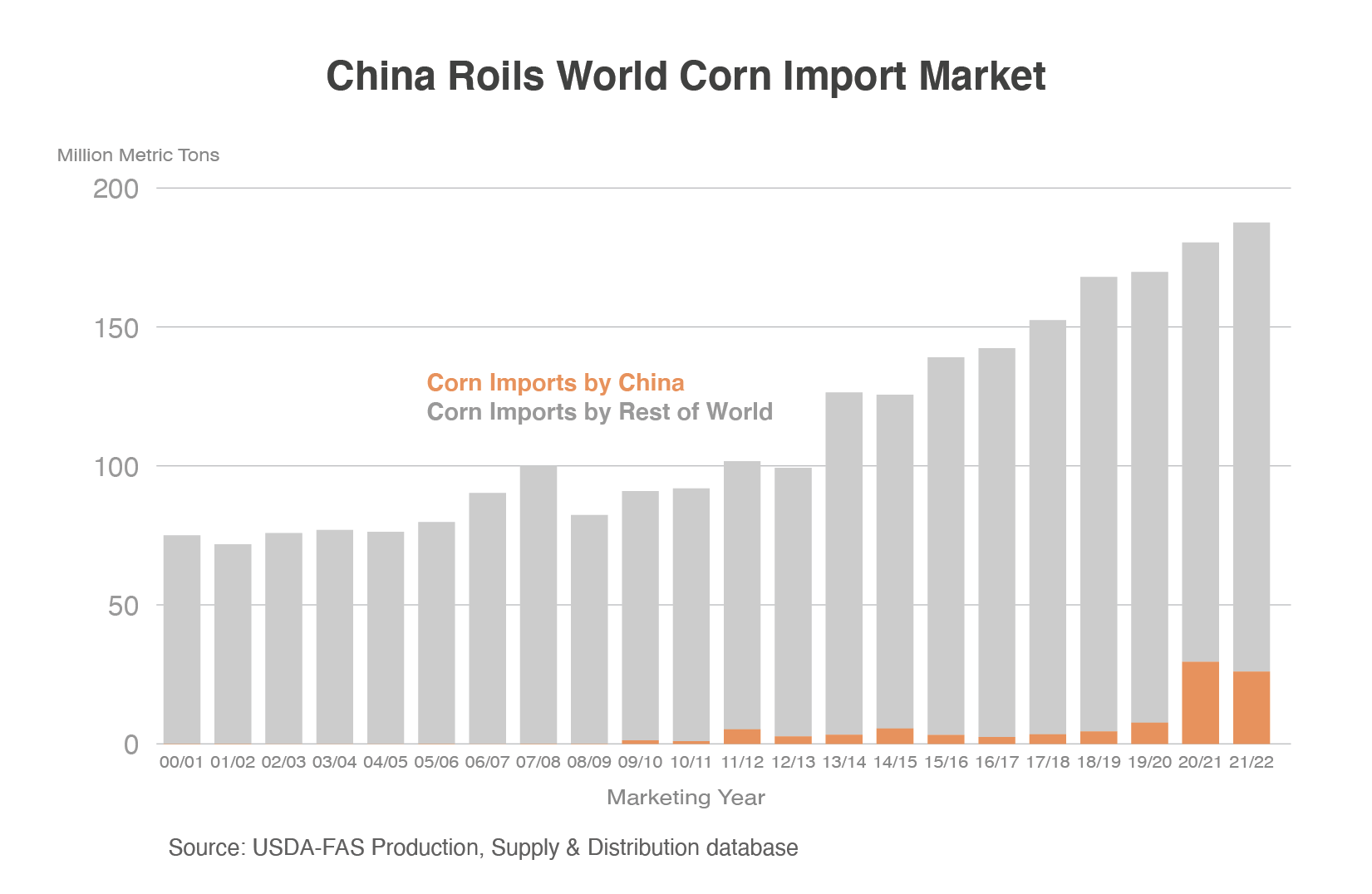 For corn, strong demand, especially from China, has helped keep prices elevated. Robust feed demand propelled China to become the world’s largest corn importer in 2020/21, accounting for 16 percent of global trade that year, up from an average of three percent in the preceding decade. China’s import demand in 2021/22 remains well above historic norms. Stocks in major corn exporting countries (the United States, Brazil, Argentina, and Ukraine) are expected to be the lowest since 2012/13.

Soybean prices have been rising since late 2020, driven by aggressive purchases from China. Stocks in Argentina, Brazil, and the United States have tightened since then, rallying prices. For the current marketing year (2021/22), the worst drought in decades has affected parts of the soybean-producing regions of South America during a critical crop development stage, reducing crop prospects and raising prices for beans, meal, and oil.

Ukraine and Russia are important exporters of wheat, corn, barley, and sunflower oil and meal. Russia’s invasion of Ukraine has disrupted agricultural exports from the region and created uncertainties about Black Sea supplies, further driving up commodity prices and increasing market volatility. As uncertainty builds about future supplies, some countries have implemented export bans or restrictions on their domestic supplies, further tightening global availability and adding additional upward pressure on prices.

Two major oilseed producers have implemented export restrictions. Argentina raised export taxes on soybean meal and oil from 31 percent to 33 percent. Indonesia raised the minimum percentage of palm oil output that processors are required to allocate to the domestic market from 20 percent to 30 percent, effectively limiting exports. These measures had a large impact on the vegetable oil and meal market since Argentina typically supplies more than 40 percent of the world’s traded soybean meal and oil, while Indonesia accounts for more than half of global palm oil exports.

In response to rising food prices, several countries have relaxed import requirements or reduced duties to facilitate imports. Brazil, for example, has eliminated its import tax on ethanol.

High prices for staple crops such as wheat can shift consumer demand to other foods such as rice.

Rice, which is a primary food grain in many lower income markets, remains plentiful and affordable relative to wheat and corn.

Higher feed costs will impact prices for poultry and other proteins. In lower-income countries, these tend to be the highest expenditure food items and consumers are likely to reduce purchases of these items first, leading to lower protein consumption.

Import demand for some agricultural commodities is relatively inelastic, meaning demand remains roughly the same even when prices increase. Buyers may be required to source products from other markets, particularly for wheat, corn, barley, and sunflower meal and oil originating from the Black Sea region.

For wheat, Ukraine accounts for about 10 percent of global trade. It typically exports mostly milling wheat to Middle Eastern and African countries and Bangladesh, and feed-quality wheat to other Asian countries. Exports primarily occur immediately after harvest in July, with March to June being a slower shipping season. Many of the countries that rely on Ukrainian wheat are shifting purchases to the European Union, India, Australia, and Argentina. Both Australia and Argentina have record wheat production, while India’s wheat supplies remain ample. U.S. wheat is available for export but at a higher price relative to other suppliers.

For corn, Ukraine accounts for about 15 percent of global trade. It primarily exports feed corn to the European Union, China, the Middle East, and North Africa. Exports are seasonally strong between November and May. Brazil has increased planted corn acreage in response to high prices and South American exports are currently forecast to be strong when they become available in a few months. Until then, U.S. corn exports are expected to bridge any global supply gap.

For barley, Ukraine accounts for about 15 percent of global trade, primarily exporting to China and the Middle East. Exports are heavily front-loaded after harvest between July and October. Argentina, Australia, Canada, the European Union, and Russia are the other major barley exporters. Argentina recently had a record harvest, and Australia barley production, if fully realized, would also be a record, so the two countries are expected to have high exportable supplies.

For sunflower oil, Ukraine and Russia account for roughly 80 percent of global exports, so other suppliers cannot offset reduced Black Sea shipments. However, importers will likely substitute with less expensive oils that are more readily available, including palm oil from Southeast Asia and soy oil from Argentina, Brazil, and the United States. There will be edible oil available for importers, but they will pay more. In March palm oil prices hit record levels and soy oil prices rose to their highest levels in decades.

The poorest countries and households spend the highest share of their incomes on energy and food. Low-income consumers in import-dependent countries will face the greatest hardships as sharply higher prices may result in reduced purchases and reduced caloric intake.

The short-term impact on consumers may be partially mitigated when governments have food assistance programs in place. However, those governments may face budgeting issues as higher commodity prices will make maintaining subsidies difficult. Countries with limited foreign exchange reserves may also face difficulties in affording imports, particularly if they are also highly dependent on imported fuels. Some markets may curtail imports and rely more on domestically produced grains, tubers, or other staples.

Shipping delays may also be an issue, particularly for markets that primarily rely on imports from the Black Sea region. Buyers may need to seek out alternative suppliers, which could require a greater transit time. This may lead to temporary shortages in some markets.

For agricultural producers around the world, high fertilizer and fuel prices are a major concern. Some producers will also face higher interest rates, further increasing production costs and potentially affecting planted acreage. Brazil’s most pressing concern for 2022/23 is fertilizer availability and price, as the country relies on imports for more than 80 percent of its fertilizer requirements. Reduced fertilizer use threatens to lower future crop yields.

High commodity prices will likely spur producers to plant more acres, but there is uncertainty about yields given high fertilizer prices and the perennial wild card of weather conditions during the growing season.

Farmers and producers in countries with export bans and restrictions may not be able to respond with increased production due to limited access to the global market and disrupted price signals, thus exacerbating supply shortfalls.

The prospects for spring planting and winter crop harvesting in Ukraine remain uncertain. In addition to disruptions directly related to the war, producers may have to contend with limited available supplies of fuel and inputs, which could reduce potential plantings and yields.

The U.S. Department of Agriculture will release its official forecast for 2022/23 crop year production, supply, and demand on May 12.