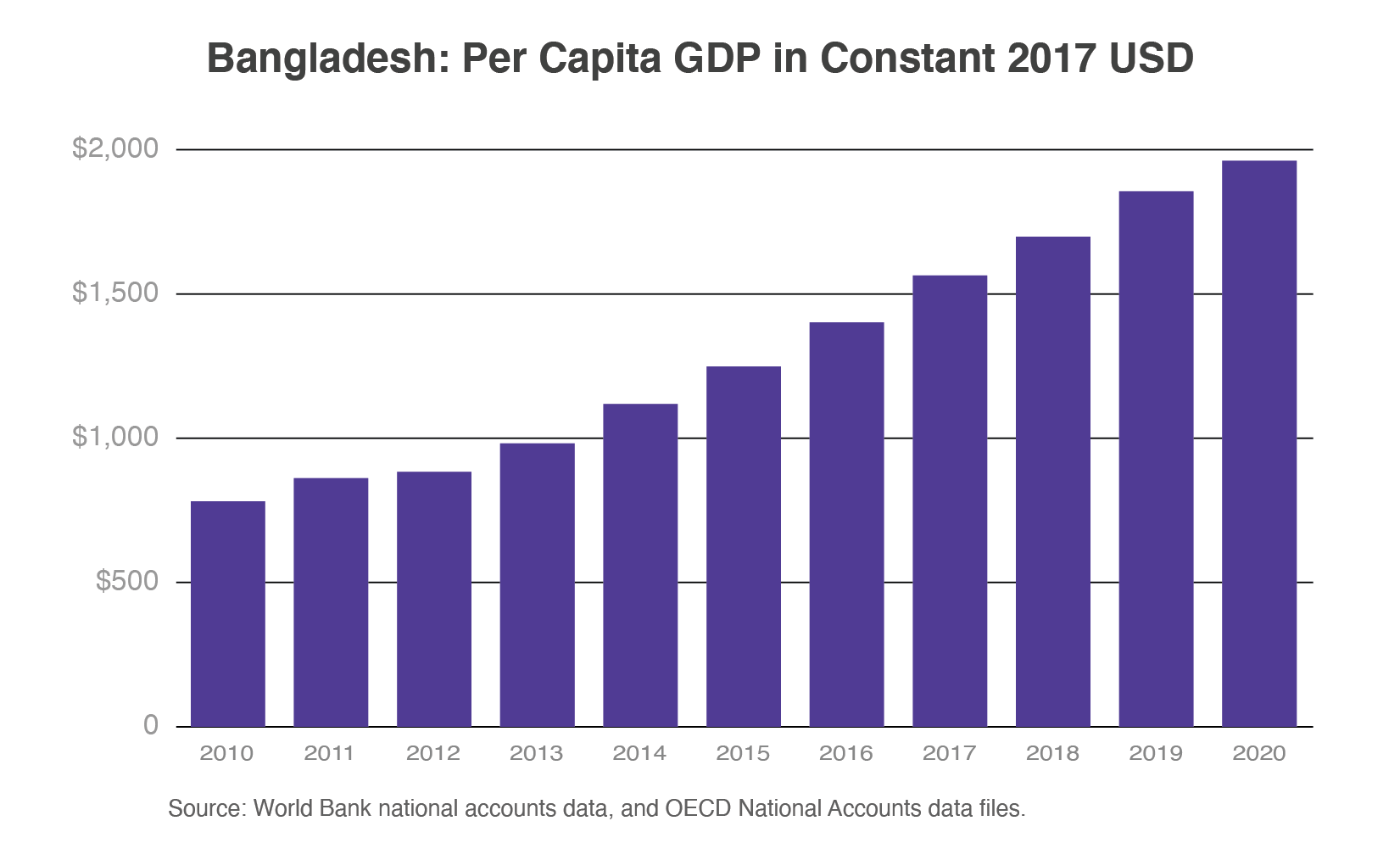 Economic conditions in Bangladesh have created significant opportunities for U.S. agricultural exports, particularly consumer-oriented commodities including tree nuts, condiments and sauces, fruit juice and non-alcoholic beverages, snacks, and baking ingredients. Bangladesh has maintained one of the fastest growing economies in the world for the past decade. The increasing population and rising percentage of middle- and high-income households create a growing potential market for U.S. agricultural products.

The World Bank has ranked Bangladesh as one of the fastest growing economies in the world over the last decade.1 According to Euromonitor International, the country’s gross income growth index is expected to quadruple from 2020 to 2040, compared to the doubling of the Asia Pacific region as a whole. Bangladesh’s gross domestic product (GDP) per capita rose by 145 percent over the last decade, from $780 in 2010 to $1,910 in 2020. Current growth trends indicate that Bangladeshi GDP per capita will reach $4,850 by the end of 2022 and $6,250 by 2027.

From 2010 to 2020, the country’s total population grew by 12 percent, from 148 to 167 million, with the number of middle- and high-income households increasing from 3 million to 5.4 million. Middle- and high-income households are projected to increase to 5.6 million in 2022 and 8 million in 2027.2 As consumers’ disposable income rises, Bangladeshis can increasingly afford to be more selective in their food choices, and are interested in the quality control offered by U.S. food and agricultural products, unlocking new market opportunities for U.S. exporters.

Rising standards of living also mean that Bangladeshi consumers are frequenting restaurants more often and are seeking additional varieties of value-added agricultural and food products. Analysts forecast retail food and beverage sales to increase by 31.7 percent over the next five years, from $115.5 billion in 2022 to $152.2 billion in 2027.3 Middle- and high-income consumer focus has particularly begun to shift toward healthier and higher-quality foods. These households generally gravitate toward well-known, international brands to fill the gap in the domestic supply of premium products, such as prepared condiments and sauces and snacks, particularly chocolate.

Global exports of tree nuts to Bangladesh are now estimated at more than $86 million, the bulk of which are comprised of areca (betel) nuts and almonds. Ninety-eight percent of U.S. tree nut exports to Bangladesh are comprised of almonds (fresh, dried, or preserved). While worldwide almond exports to Bangladesh have grown by 126 percent since 2017, U.S. almond exports have increased by 784 percent to just less than $5.5 million in 2021. The United States is a dominant world almond producer with limited competition from Australia. In 2020, the United States held 19 percent of market share for almond exports to Bangladesh.4  Indonesia and Thailand hold the largest shares of the tree nut market at 42 percent ($36 million) and 24 percent ($21 million), respectively. However, the majority of their exports are comprised of areca nuts, products used similarly to chewing tobacco, which do not compete with almonds. 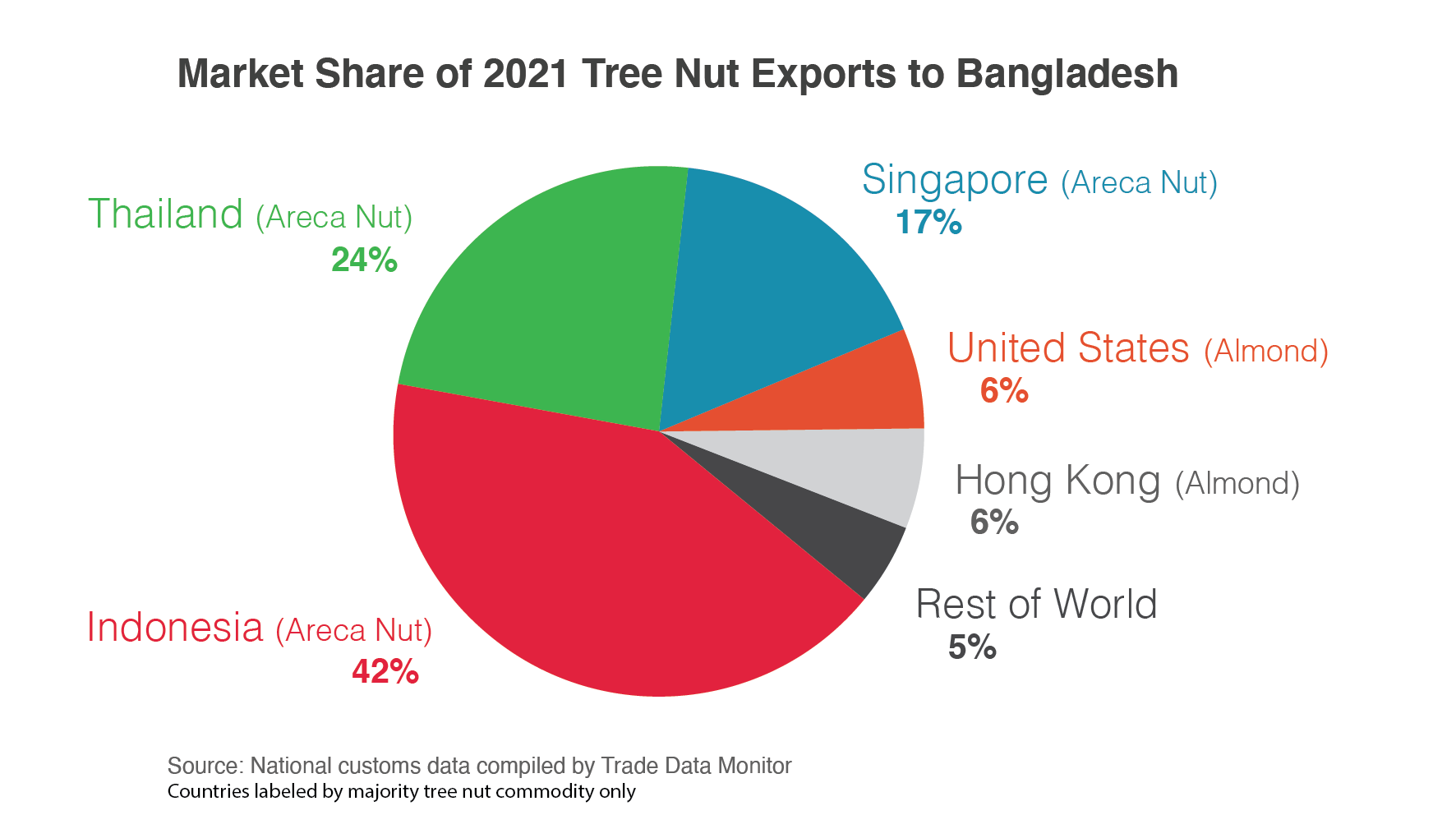 Global condiment and sauce exports to Bangladesh have steadily expanded by 66 percent over the past five years to an estimated 2021 value of $25 million.5 The market is heavily dependent on imports, with demand centering around herbs and spices, dry sauces, and table sauces such as mustard, soy, ketchup, mayonnaise, salad dressings, and vinegar. According to Euromonitor International, ketchup is the most popular table sauce, followed by growing demand for mayonnaise, chilli, and soy sauces. Pickled products are also a traditional part of Bangladeshi achar cuisine and have driven the increasing demand for vinegar. Singapore, India, and Thailand supply approximately 70 percent of the condiments and sauces market with relatively equal shares.6 Square Consumer Product’s Radhuni brand and Pran Foods Ltd. dominate an otherwise fragmented domestic market but focus on traditional spices and flavors. This specialization leaves a lucrative opportunity for U.S. exporters offering Western products that are generally considered to be high-quality and are increasingly accessible to middle- and high-income retail and restaurant consumers.

Combined worldwide exports of fruit juice and non-alcoholic beverages (including coffee and tea) to Bangladesh reached $18.7 million in 2021. Sixty-eight percent of this number was comprised of roasted coffee, coffee extracts, essences, and concentrates, a category that grew by 57 percent since 2017. While India dominates coffee and tea exports to Bangladesh due in part to proximity and lower shipping costs, U.S. processed and reexported coffee products have captured increasing market share over the past five years as more Bangladeshi households have diversified their retail purchases to premium alternatives and specialty products.

COVID-19 restrictions on the hotel, restaurant, and institutional (HRI) sector have constrained growth in bottled water, carbonated beverages, and fruit juice exports during 2020 and 2021. However, forecasts indicate that trade volume will increase year-over-year by 7.5 percent for bottled water, 5.7 percent for carbonated beverages, and 8.3 percent for fruit juice between 2021 and 2026.7 Current U.S. fruit juice exports are primarily comprised of apple, orange, and lime juice, which gained an additional 6-percent market share in 2021 as U.S. and Pakistani apple and orange juice products cut into European Union juice exports.8 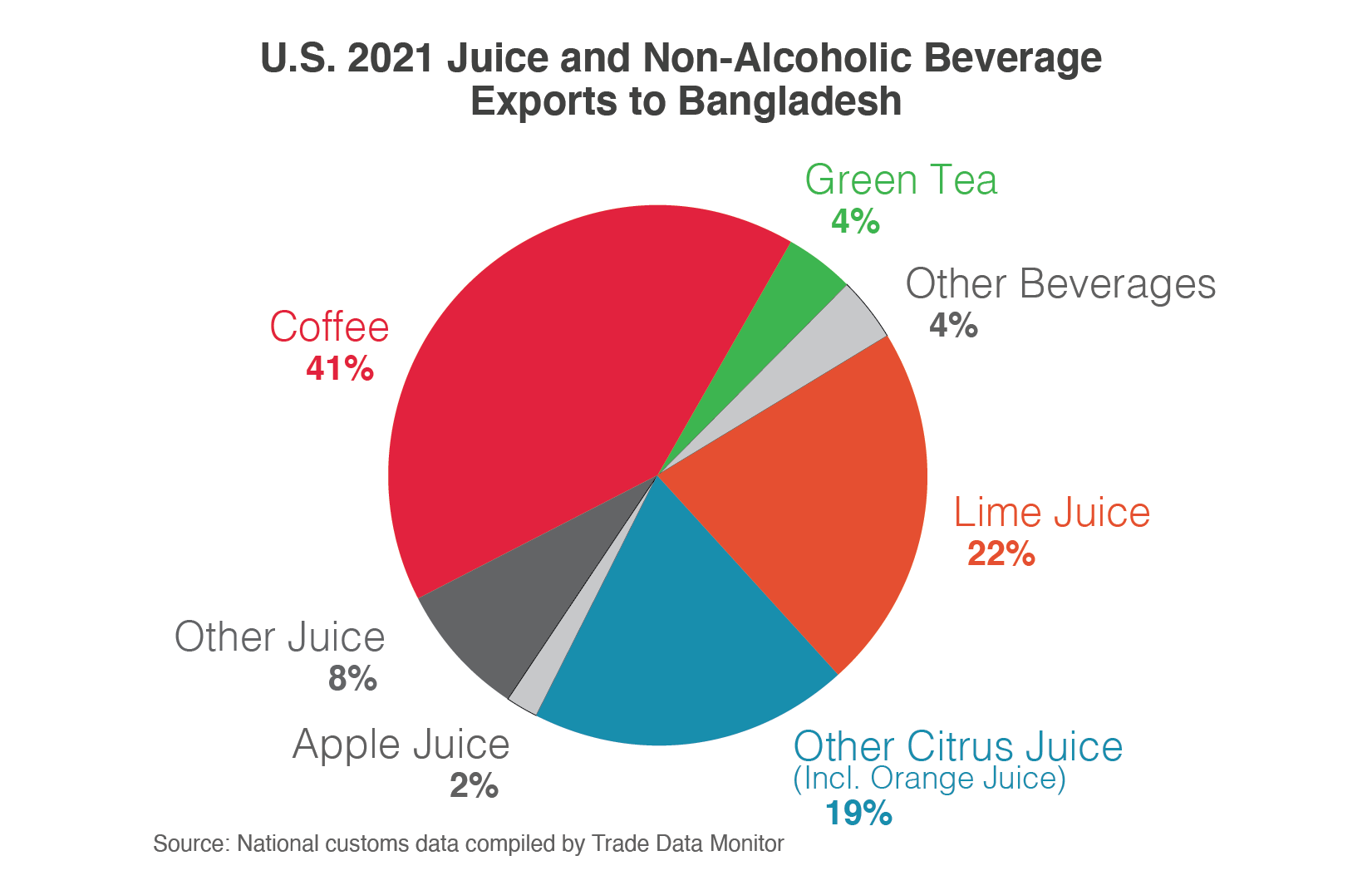 According to Euromonitor International, the Bangladesh snack industry grew to $1.5 billion in 2021 with a forecast year-over-year growth rate of 10-16 percent through 2025. Packaged snacks have become increasingly popular following the outbreak of COVID-19. Consumers view packaged snacks as more hygienic and as higher quality than traditional, unpackaged alternatives.

Confectionery, particularly hard candies, have driven demand in the snack market. Their low prices make them affordable across most consumer groups, creating a $576 million confectionery market in 2021.9 Sweet biscuits (cookies) follow a similar trend due to their low-price range. Chocolate, snack bars, and fruit snacks have also increased sales but at a lower rate since sales are mainly limited to middle- and high-income consumers looking for indulgences and specialty products. These groups have a strong preference for well-known brands, which has allowed names like Mondelez International’s Cadbury and Nestle SA’s KitKat to dominate the chocolate market. However, domestic competition is increasing as companies like Pran Foods develop cheaper alternative products.

Most consumers consider packaged savory snacks including nut and seed mixes, popcorn, and potato chips to be expensive, especially as they compete with traditional snacks such as chanachur (a mixed savory snack) and bakarkhani (a spiced flat-bread snack). Savory biscuits (crackers) are an exception, as they generally have low prices and wide distribution, creating the bulk of the $282 million savory snack market in 2021.10 Current U.S. snack exports are limited to popcorn, cough drops, and prepared or preserved nuts.

U.S. baking ingredient commodity exports to Bangladesh include vegetable oil, yeast, dough mixes, tapioca, sugars and sweeteners, and baking cereals. Edible oils offer the fastest growing opportunity for U.S. baking ingredient exporters with a historic compound annual sales growth rate of 15 percent (19 percent in 2021). Oils are used in daily household cooking to make traditional dishes like curry, which is eaten by all socioeconomic classes. There is also increasing demand for vegetable oil from the food manufacturing and HRI sectors. Palm and soy oil are the most commonly used products due to their lower prices, but other oils, like sesame and olive oil, are gaining popularity for their taste and perceived health benefits, despite their higher prices.

Bakery goods, cereals, and pasta exports have also experienced significant growth during the COVID-19 pandemic as more people cooked at home. Worldwide bakery goods exports to Bangladesh exceeded $91.7 million in 2021 with continuous year-over-year growth. This was compounded by the growth of the domestic food manufacturing industry and increasing Bangladeshi household incomes.

Global dried and processed fruit exports to Bangladesh have grown by 83 percent since 2017, led by dried dates with a growth rate of 268 percent, for a total of $23 million and $10 million in exports, respectively.11 As one of the leading global exporters of processed fruits, U.S. exporters have significant potential to expand the variety of processed and dried fruits exported to the Bangladesh market, and as of 2021, have also begun exporting prepared and preserved citrus fruits.

Policy reforms and strong economic growth have helped to encourage foreign direct investment. The establishment of 88 economic zones and investments in rural energy infrastructure have improved the distribution of packaged food in rural areas and enabled more businesses and households to store chilled and frozen food, including ice cream and frozen desserts.

While Bangladesh is a member of the World Trade Organization and maintains relatively open trade with the United States, it does impose tariffs on many U.S. food and agricultural products. It also requires official U.S. government issued export certificates for plant and livestock products, meat, poultry, dairy, fresh fruit, and organic products. For an overview of the most recent regulations and standards, see the Foreign Agricultural Service Dhaka’s Export Certificate Report.

Bangladesh has imposed varying import taxes to protect its domestic industries over the past five years. As of the writing of this report, tariff rates for U.S. agricultural imports range from 0-25 percent:

U.S. agricultural exports to Bangladesh have traditionally centered around bulk exports, but Bangladesh’s accelerating economic growth and increasing household disposable income are opening new markets for U.S. intermediate and consumer-oriented goods. Global exports of tree nuts, condiments and sauces, fruit juice and non-alcoholic beverages, snacks, and baking ingredients to Bangladesh have all expanded considerably in the last five years. Promotion activities to increase awareness among Bangladeshi consumers and importers as to the variety and quality of U.S. products could further improve prospects for U.S. exporters.