Northeast China has seen a remarkable transition from rustbelt to economic revival over the past decade. While the region’s industrial sector has been moving away from state control, the agricultural sector has been entangled with government intervention. The region is China’s agricultural powerhouse, yet its struggles with market-distorting support prices, bulging state reserves, and sector reforms illustrate the broad challenges facing the country as a whole in terms of improving the agricultural sector’s competitiveness and efficiency. Regional demand for imported farm and food products has been soaring and outpacing the rest of the country in recent years, making the northeast an attractive market for U.S. agricultural exports. 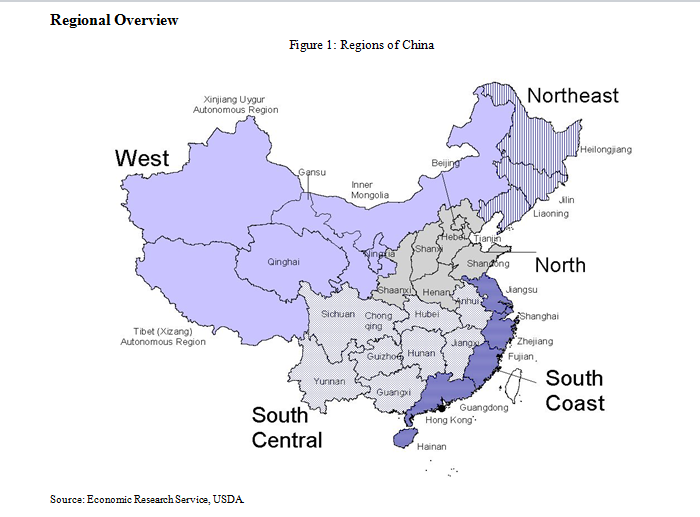 It has a population of 110 million and a land area of 800,000 square kilometers, roughly the size of Turkey. Before China’s economic reforms in the mid 1970’s, the region was the country’s industrial center, but when it remained closed during China’s opening, it lagged well behind other regions and became known as the rustbelt.  As China’s bastion of state-owned enterprises, the region made headlines a decade ago with large scale social unrest stemming from factory closures and mass layoffs. Since 2003, Beijing’s campaign to “revive the northeast” has helped inject capital and spur the region’s economic growth. Today the northeast remains China’s heavy industrial base for iron and steel, oil, petrochemicals, shipbuilding, machine tools, aviation, and automobile manufacturing, albeit with growing foreign investments and less reliance on state-owned firms.

In addition to being the country’s industrial base, the region is also China’s granary, as it is situated on one of the world’s few fertile black earth belts and has the highest endowment of cropland per capita in China. While most crop production comes from farms smaller than two acres, in the northernmost province of Heilongjiang a number of  large scale state farms still exist (under one umbrella state farm organization), accounting for approximately one third of crop production there. These farms’ sizes combined with ready access to state capital make the northeast the main market for big agricultural machinery. For instance, over 80 percent of the country’s imports of combines—mostly supplied by the United States—come in through the custom district of Dalian in Liaoning province . Efforts to encourage farm consolidation and larger scale production are underway in all three provinces, most notably in Heilongjiang.

The northeast is China’s most important source of soybeans, corn, and japonica rice, accounting for 41 percent of the country’s soybean production, 34 percent of its corn output, and 30-50 percent of its japonica rice crop . In recent years soybeans have been losing acreage to more lucrative crops such as corn and rice (chart 1). 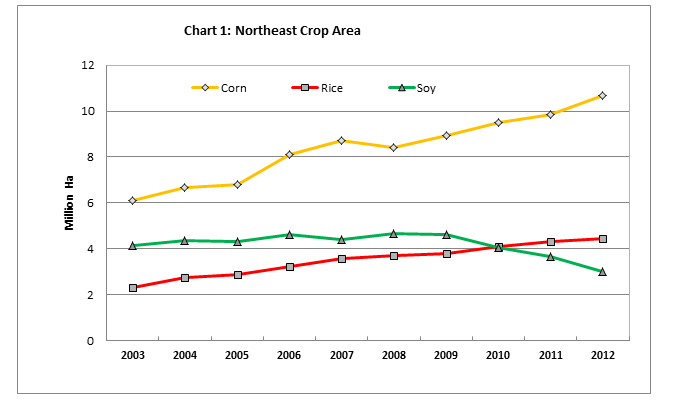 Concerned with rising input costs and falling farm profits, the government has a temporary reserve program for corn in the northeast with preset floor prices that average 20 to 70 percent higher than world prices. Current government corn purchases in the region are over 60 million tons, far exceeding the previous year’s 30 million and outstripping the area’s storage capacity. Similarly, the government is providing floor prices for rice, including japonica rice in Heilongjiang province, which produces more rice than Japan and the United States combined. Storage there is reportedly near capacity with state purchases under the price support program.

In contrast to policies on corn and rice, the government plans to stop the reserve policy for supporting soybean prices this year. Over 85 percent of China’s soybean consumption is imported. Rather than continuing floor price support for domestic soybeans which made imported beans more attractive, the government is considering instead a deficiency payments scheme through a “target price” subsidy to soybean farmers in the northeast and Inner Mongolia. Details of the policy are not expected to be announced until later this year.

Farmers in the northeast are having a hard time selling corn and rice to the rest of the country as prices are kept artificially high by support prices. To help move grains out of the area and ease the storage pressure, the central government is offering companies from other regions a grain transport subsidy. Transportation share of food costs is very high compared to other countries due to poor and fragmented distribution infrastructure. While the transport subsidies amount to just 6 percent of the corn support price and under 5 percent of the rice minimum purchase price, they nevertheless discriminate against imported grain .

In addition to grain and oilseed crops, the northeast is also an important area for producing milk and beef, accounting for 20 percent of the national output . Between 2003 and 2007, milk production in the region nearly doubled from 3.7 million tons to 6.6 million. However, the rate of growth has dramatically slowed down since then, with 2012 production totaling just 7.3 million tons. Like the rest of the country, the dairy industry here is struggling to make a transition from small-farm producers to more closely-controlled supply chains and company-operated farms, and significant private and government investment is being made to encourage large scale dairy production. Despite an influx of imported dairy cows (mostly from Australia and New Zealand), overall milk production has been stagnant as production from new large scale farms try to keep pace with reduced output from small dairy farms. Alfalfa imports, primarily from the United States, are supporting the dairy industry, but there is also a campaign to develop domestic alfalfa and other forage in the northeast.

China has a total of five fuel ethanol plants, with a combined output estimated to be 2.6 billion liters (687 million gallons) in 2013, which accounts for less than one percent of China’s liquid fuel production. Two of the plants are located in the northeast: China Resource Alcohol Company in Heilongjiang and Jilin Fuel Ethanol Company in Jilin. These two plants use corn as the principal feedstock (the plant in Heilongjiang also uses some rice). As the region has bulging corn stocks with quality concerns, those with high mold content and low quality are typically used for ethanol production.

In 2008, when grain price spikes triggered food security concerns, China issued official guidelines that biofuel development (including fuel ethanol) should not compete with food and feed crops. As a consequence, grain-based ethanol plants were capped from expanding and new developments were focused on alternative feedstock such as sweet sorghum and cassava. The government lowered financial support for grain-based ethanol production from 19 cents/liter in 2009 to 6 cents/liter in 2012. China’s Ministry of Finance announced that by 2015, the government will remove the Value Added Tax rebate of 17 percent and impose a five-percent consumption tax for grain-based ethanol production to encourage improvement in efficiency. The government has set a target of 4 million tons (1.3 billion gallons) for fuel ethanol production by the end of 2015. However, given inadequate supplies of non-grain feedstock and slow progress in advanced technology, FAS China reports that experts are pessimistic on reaching this target. Although China does not currently allow fuel ethanol imports, its concern with energy security, substantial growth in personal vehicle ownership and resulting surges in gasoline consumption, and restraints in domestic ethanol production point to potential for eventual market inroads.

Compared to the wealthier coastal areas, the northeast is a less prominent importer of agricultural products, accounting for just 6 percent of China’s total agricultural imports. Nevertheless, the region has seen remarkable growth in recent years, reaching $7.1 billion in 2013 (chart 2). 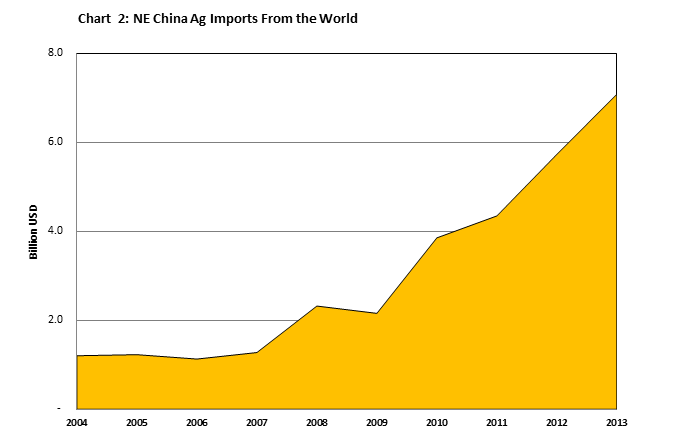 If northeast China were its own country, its agricultural imports would fall between Norway and Ukraine as the world’s 25th largest market. The region’s import growth has also been accelerating in the last five years, expanding 32 percent a year compared to 23 percent for the rest of the country .

Brazil and the United States are the largest suppliers to the region, with respective market share of 35 and 20 percent. The EU, New Zealand, and Australia round out the top five. The largest imports into the region have been soybeans (chart 3). 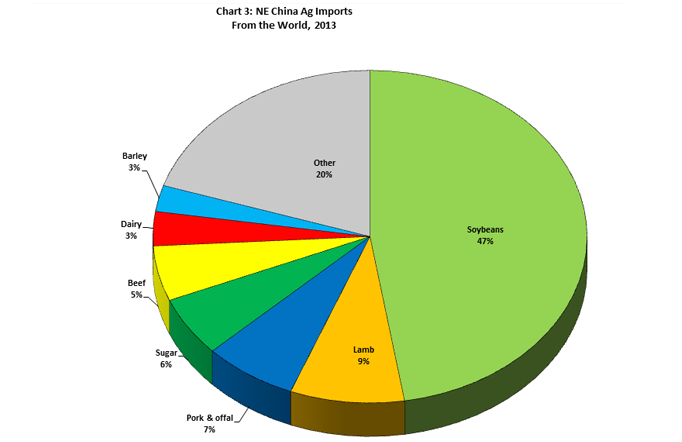 The northeast’s status as the country’s largest producer of soybeans notwithstanding, its production and trade have mirrored the national trend, one that sees the crushing industry continuing to exert strong demand and supplementing declining domestic production with growing imports. Most of China’s crushing plants are located along the coastal region to facilitate the receipt of imported soybeans. Almost all of the imported soybeans into the northeast went through Dalian, the region’s gateway port city. Not surprisingly, Brazil and the United States dominate the soybean trade here as they do elsewhere.

The northeast is a major importer of lamb, buying $600 million in 2013, almost two thirds of the country’s total lamb imports. Most of it is sourced from New Zealand. The region also purchases a significant amount of pork and offal, with imports more than doubling in just two years, from $230 million in 2011 to $494 million in 2013, over three quarters of which is offal. The EU and the United States are the two largest suppliers, though U.S. share slipped last year, while the EU, particularly Germany, surged ahead. The northeast is an important region for raw sugar imports, which reached $412 million last year, mostly from Brazil. Beef imports jumped from $21 million in 2011 to $360 million two years later, primarily from Australia. The region’s dairy imports, consisted chiefly of whey, soared from $85 million in 2011 to $232 million in 2013. The EU and New Zealand are the main suppliers. The United States, as a distant third exporter, nevertheless saw its dairy exports there more than tripling over the last two years, to $18 million.

Until recently, the northeast was one of the country’s poorest regions, beset by labor unrest. Today it is among the fastest-growing areas with a flourishing economy. In recent years the region’s GDP grew faster than much of the rest of the country and has outpaced national GDP growth every year since the late 1990s . Provincial per capita GDP ranks among the highest in the country (figure 2). 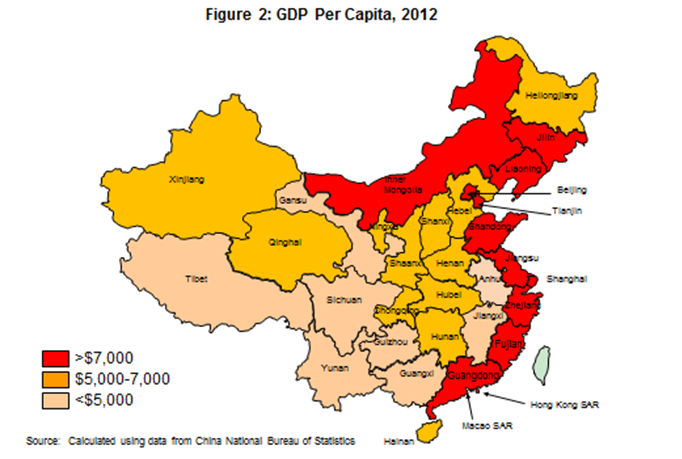 The three provincial capitals, Shenyang, Changchun, and Harbin, each have a population of over 8 million. The region’s gateway city of Dalian has the country’s northernmost ice-free port, which handles most of the northeast’s trade volume and has a per capita GDP higher than many first-tier cities such as Beijing, Shanghai, and Guangzhou.

Buoyed by economic growth and urban development, the region’s agricultural imports have been soaring and demand for soybeans, red meat, dairy, and sugar have all seen double-digit growth over the past five years. In addition to consumer demand, imports of inputs such as machinery, animal genetics and breeding stock, and feed ingredients to support agricultural production are also important in this region. Despite stiff competition, U.S. agricultural exports to the region have grown 18 percent annually since 2009. Aside from soybeans, which make up three quarters of U.S. exports, products such as pork and offal, dairy, fresh fruits, and feeds and fodders have seen even faster growth, making the northeast an attractive market.

Opportunities for U.S. Agricultural Exports in Mexico
Mexico is the second-largest export market of agricultural products from the United States. Over the last decade, U.S. agricultural exports to Mexico grew 48 percent to $19.1 billion.
West Africa: Prospects for U.S. Exporters
The West African nations of Côte d’Ivoire, The Gambia, Ghana, Nigeria, and Senegal are home to some of the largest cities in the region...
View More Data & Analysis