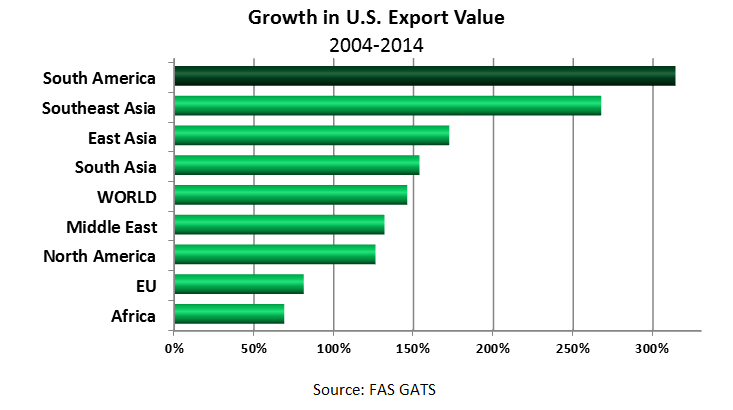 Colombia: Since the U.S.-Colombia Trade Promotion Agreement entered into force in May 2012, U.S. exports have soared, with Colombia becoming the largest U.S. market in South America. Exports reached $2.4 billion in 2014, more than doubling in just two years. In the first quarter of 2015, exports are up another 23 percent compared to the same period last year. U.S. agricultural exports to Colombia have grown far faster than U.S. agricultural exports globally (see chart below).

The U.S.-Colombia trade agreement is a boon for U.S. agricultural exporters. U.S. market share had been declining in the years prior to its implementation, and Colombia had previously entered into FTAs with U.S. competitors such as Canada. The removal of tariff and nontariff barriers and certain government support measures has led to a significant increase in Colombian imports of U.S. corn, wheat, rice, pork, and soybean meal under the FTA. Colombia’s tariff structure in agricultural products will be completely phased out over a 19-year period under the FTA, but more than half of U.S. agricultural exports became duty-free upon the agreement’s entry into force. This included wheat, soybeans and soybean meal, among other products. In addition, duty free access under tariff-rate quotas (TRQs) was provided for a number of key products.

U.S. market share in Colombia topped 43 percent in 2014, up from 19 percent in 2012, the year the agreement was signed. The United States overtook Argentina as the leading provider of agricultural products to Colombia in 2013 and 2014. This has been driven largely by increased Colombian imports of corn (Colombia was the fourth-largest export market for U.S. corn last year), soybean meal, and consumer-oriented products such as pork and prepared food.

Peru: The U.S.-Peru Trade Promotion Agreement (PTPA) entered force on February 1, 2009 and has boosted U.S. exports by cutting agricultural tariffs and improving access for many U.S. commodities through rising TRQs over time. When PTPA entered into force, about two-thirds of Peru’s agricultural tariffs for U.S. products were immediately eliminated, while the remaining tariffs are gradually being brought to zero. As a result, U.S. exports of agricultural products to Peru have nearly tripled from $424 million in 2008 to a record $1.2 billion in 2014. The majority of this growth has been due to large increases in corn exports, which reached nearly $500 million in 2014. Consumer-oriented product growth has included dairy products, beef, and prepared food products.

Chile: The United States-Chile Free Trade Agreement entered into force on January 1, 2004. Tariffs have been reduced annually, with the 12th and final annual reduction taking place January 1, 2015. Now, all U.S. exports enter Chile duty-free. In the decade since the FTA began, U.S. exports to Chile have climbed, tripling in just the past five years. While a large portion of the United States’ increased exports to Colombia and Peru have been bulk products, nearly all of the growth in exports to Chile has been in high-value products such as red meat and poultry products, dairy, beer, and tree nuts. In fact, only 15 percent of U.S. agricultural exports to Chile in 2014 were bulk commodities. 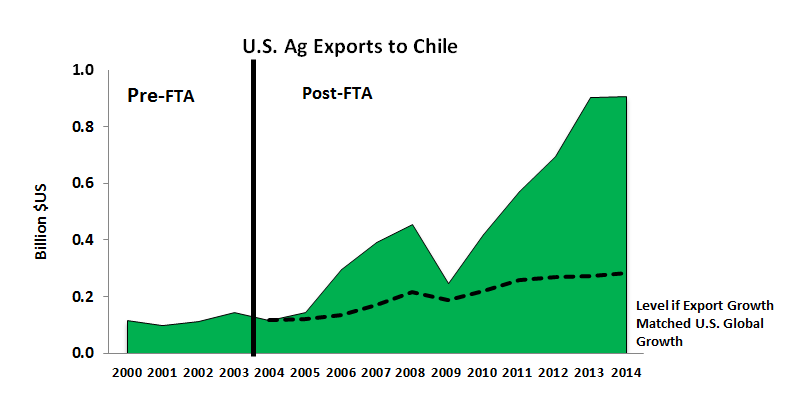 Exports Have Benefited from Less Argentine Competition in Recent Years 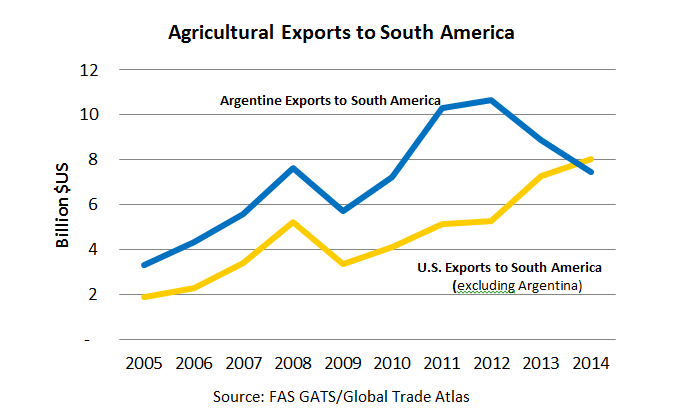 In addition to Brazil, U.S. exports to Colombia have also seen a dramatic shift in light of the decreased exports from Argentina and benefits from the FTA. Since 2012, the value of Argentine exports to Colombia has dropped by more than 70 percent, while U.S. exports have increased by 120 percent in value. The primary replacement products have been corn, soybeans, and soybean meal. 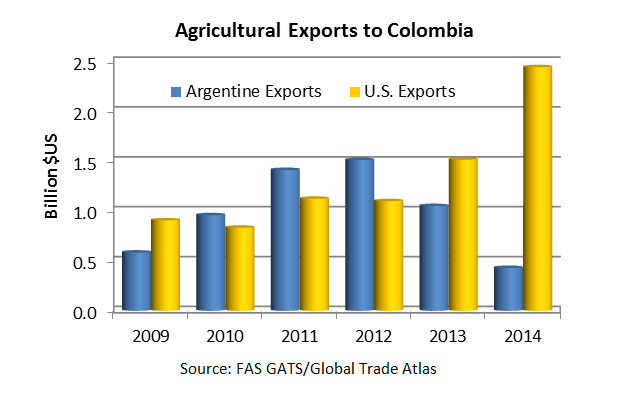