On June 28, 2019, the European Union became the first major partner to strike a trade agreement with the Southern Common Market (or MERCOSUR) countries of Argentina, Brazil, Paraguay, and Uruguay. The landmark agreement, which the EU Parliament and Commission have yet to ratify, covers a market of 780 million people and encompasses 25 percent of world GDP, making it one of the largest free trade areas in the world.

The agreement will eliminate 93 percent of tariffs for MERCOSUR exports to the EU, while offering preferential treatment for the remaining 7 percent. Similarly, the agreement removes tariffs or creates tariff-rate quotas (TRQs) for key EU agricultural exports to MERCOSUR. In addition, the agreement provides protection for upwards of 350 geographical indications (GIs), recognizes the principle of regionalization, and adopts language on EU food safety and health standards, including the “precautionary principle.”

Although a final tariff schedule has not yet been publicly released, a preliminary analysis, based on presumed tariff reductions and TRQs, indicates that U.S. agricultural products that compete with MERCOSUR and EU products will be at a significant disadvantage.

Exports of U.S. agricultural and related products to the EU averaged $15.4 billion annually from 2015 to 2019. An estimated $4 billion of those annual exports compete directly with similar products from MERCOSUR and are therefore at particular risk. Likewise, preferential status for EU products in MERCOSUR will hurt competitiveness for U.S. exports of intermediate and processed consumer products to these South American countries. The EU’s success in securing a commitment to protect GIs, and the language on the “precautionary principle” in the agreement will continue to serve as a template for future EU trade negotiations and potentially serve as a barrier to U.S. exports.

Foremost is the heightened global concern over climate change and the critical role Brazil’s rainforest plays as the planet’s largest carbon sink, but biodiversity is another area of concern. These penalties could include divesture of Brazilian assets in investment portfolios as fund managers in Europe and elsewhere seek to comply with growing investor demands for improved environmental stewardship and sustainability, reduced foreign direct investment in Brazil’s economy, and increased trade barriers. Additionally, EU farmers who are worried about increased competition could discourage approval. In particular, EU producers are worried about the ethanol and beef concessions awarded to MERCOSUR countries.

Potential Impacts on U.S. Agricultural Exports to the EU

In the EU market, the United States competes with the MERCOSUR countries as far as exports of a significant number of agricultural and related products. While it is beyond the scope of this paper to analyze each product, a preliminary analysis identifies nearly $4 billion in U.S. products that are potentially threatened by MERCOSUR competition and tariff reductions under the new EU-MERCOSUR trade deal.

Ethanol
From 2015-2019, MERCOSUR has only averaged a 7-percent market share in the EU for ethanol exports, but has won major concessions in the new agreement. MERCOSUR was awarded an in-quota duty of one-third the most-favored-nation (MFN) rate for 450,000 tons (570 million liters) of ethanol for chemical use and 200,000 tons (253 million liters) of ethanol for all uses, including fuel. For reference, the EU imported a global total of 966,000 tons of ethanol in 2019.

Most years, the EU imports considerably more ethanol for fuel use than for industrial use. This demand has created considerable market opportunity for U.S. suppliers, especially due to the fact that, since 2014, U.S. ethanol has consistently been the lowest-priced ethanol traded on global markets. Over the past five years, the United States has increased its share of the EU’s ethanol import market from 6 percent to 28 percent, despite high tariffs and stringent greenhouse gas emission requirements. (For more information see the FAS 2019 EU Biofuels Annual Report.)

The United States, Pakistan, and several other countries are larger suppliers of ethanol to the EU than are the four MERCOSUR countries combined. Some of these countries will see an erosion in their share of the EU import market once MERCOSUR access improves, but it is not immediately apparent which countries will be most impacted.

Beef
The United States is the fourth-largest exporter of beef to the EU, behind Brazil, Argentina, and Uruguay. U.S. beef exports to the EU are not likely to be seriously affected by provisions in the EU-MERCOSUR trade deal that aim to improve MERCOSUR’s market share. This is attributable in part to the recent negotiations that increased the U.S. share of the EU’s high-quality beef quota. (For more information please see the FAS report EU: New High Quality Beef TRQ Allocation.)

The EU has a high out-of-quota MFN ad-valorem equivalent duty on beef and beef products of approximately 60 percent. Under the agreement, the EU will allow 99,000 tons of beef (55 percent fresh, high-quality beef, and 45 percent frozen beef) to enter its market with a 7.5 percent duty and will eliminate the in-quota rate for the World Trade Organization “Hilton” quota. (For more information, see the FAS report Comparison of EU Tariff-Rate Quotas for High-Quality Bovine Meat.)

Under the Hilton quota, the EU imports up to 66,826 tons of high-quality beef at a 20-percent duty from certain suppliers, each of which has a specific allocation and certain product requirements. The Hilton quota offers Canada, the United States, Australia, New Zealand, and the MERCOSUR countries specific quotas at 20 percent, as opposed to 45-60 percent for other categories of high-quality beef products. Canada recently achieved duty-free access to the Hilton quota as a result of its trade agreement with the EU. In short, due to the complexity of the EU’s TRQ allocations, and the differing products offered by the United States and MERCOSUR, it is unlikely that U.S. market share for beef exports will be significantly affected by the EU-MERCOSUR trade deal. 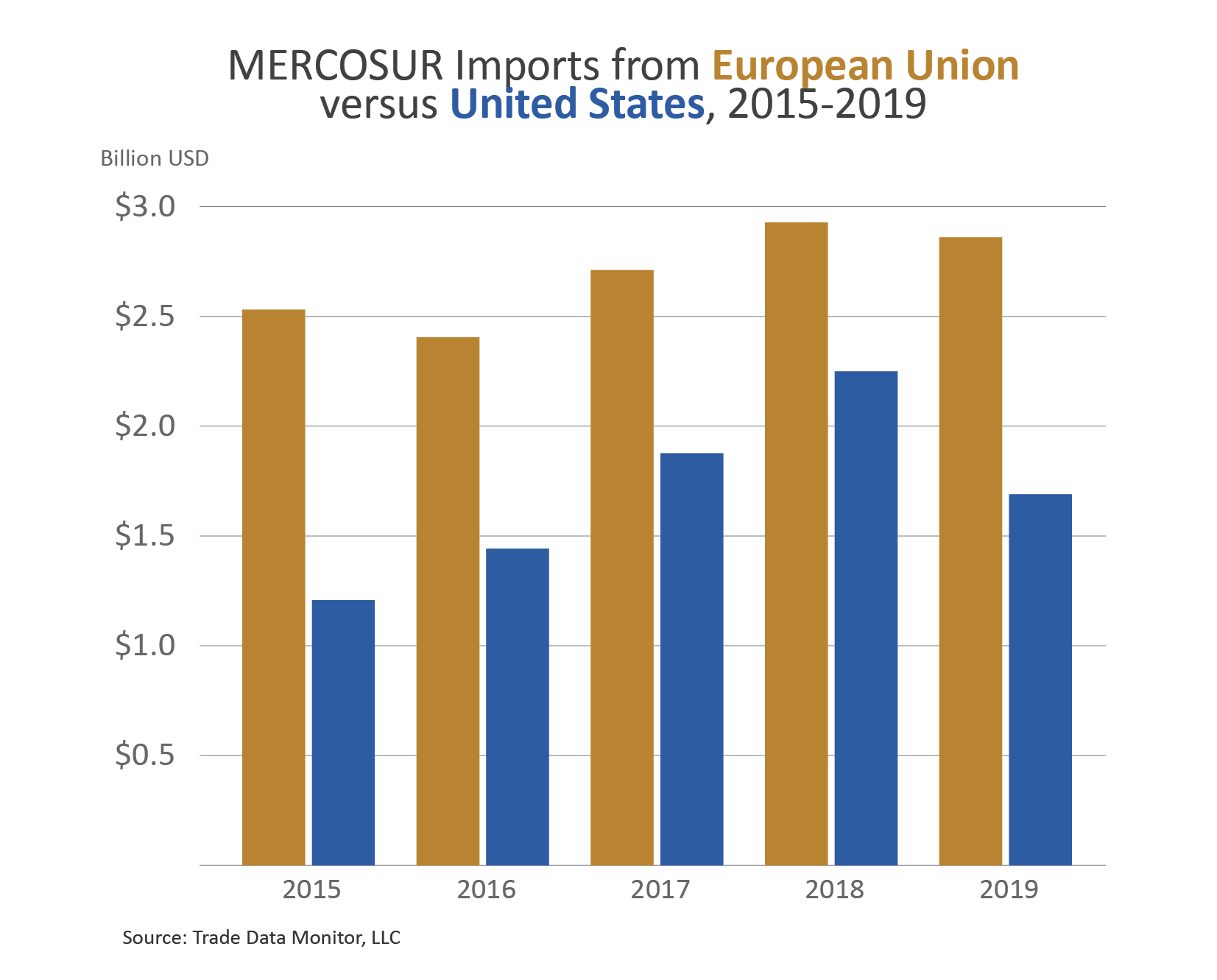 Agricultural products from the United States and the EU already represent a significant portion of MERCOSUR’s imports, but most of the products do not overlap. From 2015-2019, nearly 60 percent of U.S. exports to MERCOSUR were soybeans and ethanol, which the EU does not export in significant quantities. In the same time period, the EU exported a variety of high-value products including olive oil, food preparations, wine, and distilled spirits. The agreement will reduce potential export opportunities for U.S. intermediate and processed consumer products in MERCOSUR.

The impact of the agreement on U.S. agricultural exports to MERCOSUR will be varied and product specific. The above table highlights key product categories with overlapping competitive interests that are at risk.

The product group “other intermediate products” includes enzymes, peptones, vegetable saps, wheat gluten, hops, and several others. While there is significant overlap between exports from the EU and the United States to MERCOSUR within the product group, the products are more specialized and thus may be harder to substitute. There is also an overlap for products within the food preparations category, which includes bread, pastry, cakes, and pasta. U.S. and EU exports of processed vegetables overlap to some degree with products such as French fries and tomatoes. The extent to which these products are unique will determine the degree to which U.S. exports are at risk due to lower tariffs on the EU.

The EU and U.S. dairy product exports that overlap include milk albumin, dry and solid lactose and lactose syrup, milk and cream concentrate, and infant formula. Cheese comprises nearly one-third of EU dairy exports to MERCOSUR. The GI protections in this agreement will entrench the EU advantage in exporting cheese.

While it is beyond the scope of this report to estimate the impact of the trade agreement’s GI protections and language invoking the “precautionary principle,” these provisions represent a major win for the EU in the arena of global norms, especially since the United States generally considers the MERCOSUR countries to be like-minded on the importance of science as a basis for trade and regulatory matters. According to the EU fact sheet Better Export Opportunities for European Farmers and Food Producers, the agreement protects 350 European GIs and “represents the largest deal ever made on GIs within a trade agreement.”

In addition, according to the same EU fact sheet, the agreement includes language on the “precautionary principle” and “the right of parties to adopt or maintain precautionary measures to protect human, animal, and plant health, even in cases where the relevant scientific evidence is insufficient.” The language on GIs and the “precautionary principle” may serve as a template for ongoing EU negotiations with countries and trade groups such as China, ASEAN, Chile, Canada, Australia, and New Zealand.