Vietnam is an emerging economy in Southeast Asia that has experienced rapid growth and development during the last few decades. As has historically been the case in many countries, growth in animal-based protein consumption has gone hand-in-hand with this economic development. Vietnam has turned to imports of corn as a feed ingredient to support the level of meat production, which increased nearly 30 percent in the last decade. Vietnam is by far the largest importer of corn in Southeast Asia and USDA forecasts it to be the fifth-largest importer globally in 2021/22. Though pork has principally been the meat of choice for the Vietnamese people, consumption of chicken meat and beef has grown as well. Aquaculture—the production of fish, shellfish, or other species in an aquatic environment—is also an expanding industry and represents a continuing opportunity for exporters of feed ingredients.

Production Goes Down, Imports Go Up 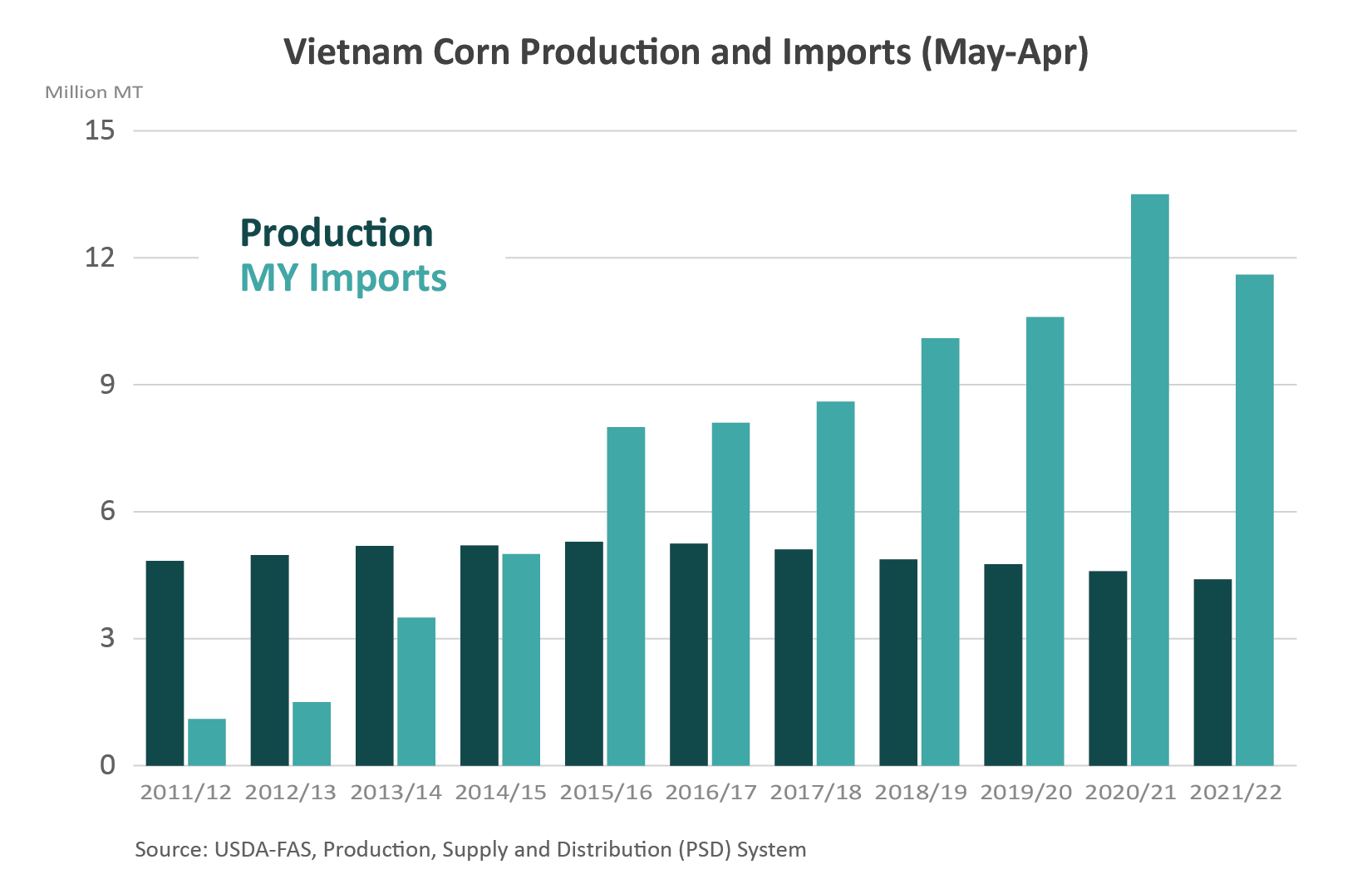 Vietnam corn production began increasing in the 1980s and continued this general trend through 2015. However, it reached an inflection point in 2015/16 as imports exceeded production for the first time since the 1970s. Corn production stalled and started to decline as domestic producers were increasingly less able to compete with imported corn on both cost and quality, which discouraged them from expanding corn area. Supplies in Argentina and Brazil became more abundant and generally traded at a lower price than U.S. corn. These two countries have supplied the majority of Vietnam corn imports from 2013/14 to the present. Despite the 2019 incidence of African swine fever (ASF) in Vietnam, importers appeared relatively undeterred as corn imports continued unabated. The decline in the current year forecast for Vietnam corn imports represents the first year-to-year decline since 2011/12 and is attributable primarily to lower exportable supplies from a frost-damaged safrinha in Brazil. Planted after early soybeans are harvested, safrinha is Brazil’s second-crop corn and is generally harvested between June and August.1

U.S. corn has generally been less competitive than South American corn due to price. Vietnam imported the largest volume of U.S. corn in the 2018/19 marketing year, when corn production in Argentina and Brazil was negatively affected by drought. However, imports of U.S. corn have been limited in other years. In late August 2021, in conjunction with a visit by Vice President Kamala Harris, Vietnam announced a tariff reduction on corn, which could improve U.S. competitiveness. Though the United States is at best a residual supplier of corn to Vietnam, U.S. exports of distiller’s dried grains with solubles (DDGS) have grown during the past decade. Vietnam is now one of the top importers of this commodity from the United States, using DDGS as a high protein and energy content feed ingredient. 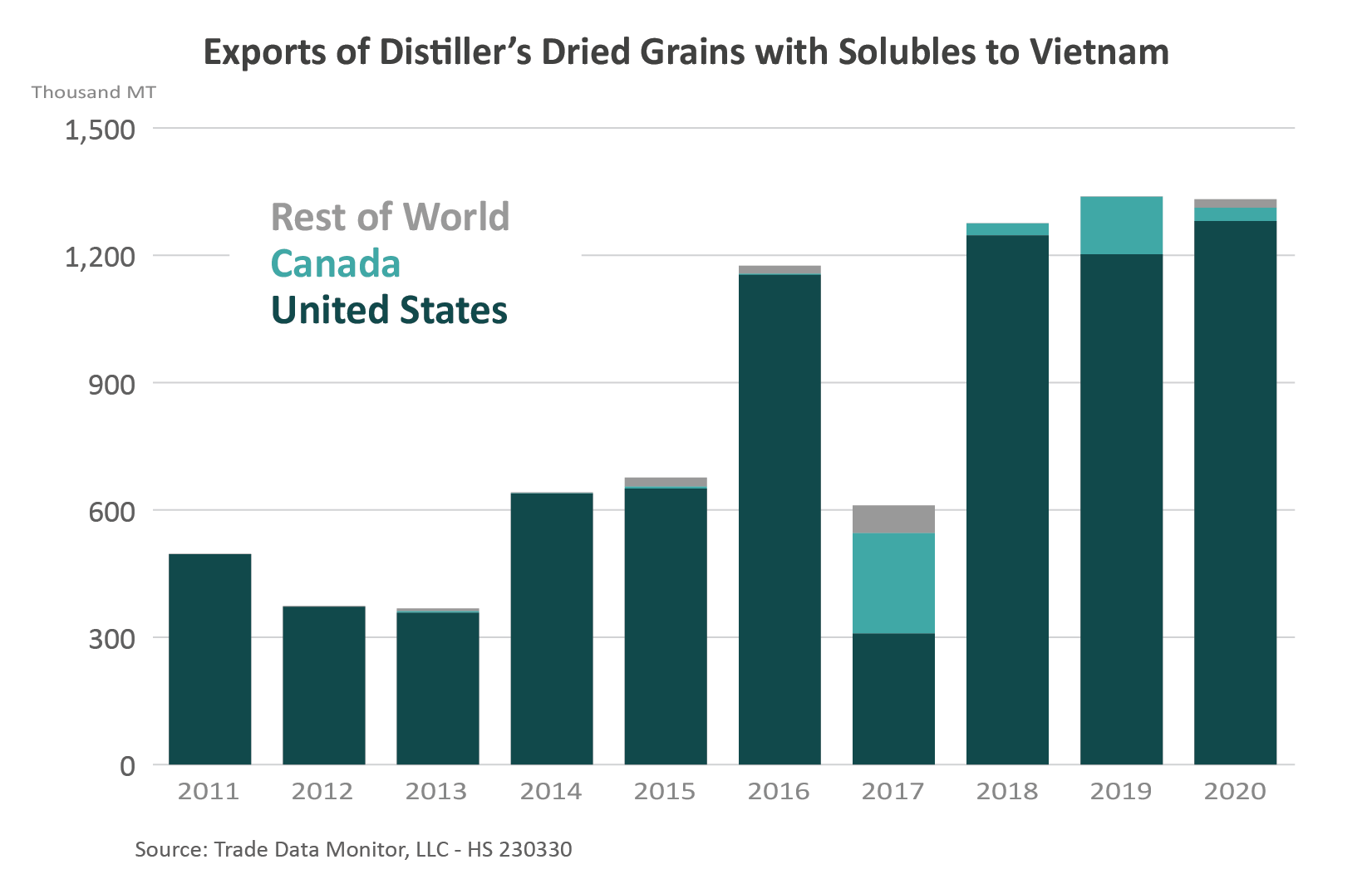 In almost every year of the last decade, the United States captured nearly the full volume of global DDGS exports to Vietnam. Owing to its well-developed ethanol production infrastructure, the United States is the world’s largest exporter of this commodity and generally faces very little competition. U.S. exports of DDGS to Vietnam in 2020 totaled nearly 1.3 million tons, valued at more than $275 million. DDGS inclusion in feed rations is tolerated well in many animal species, including those raised in Vietnam. 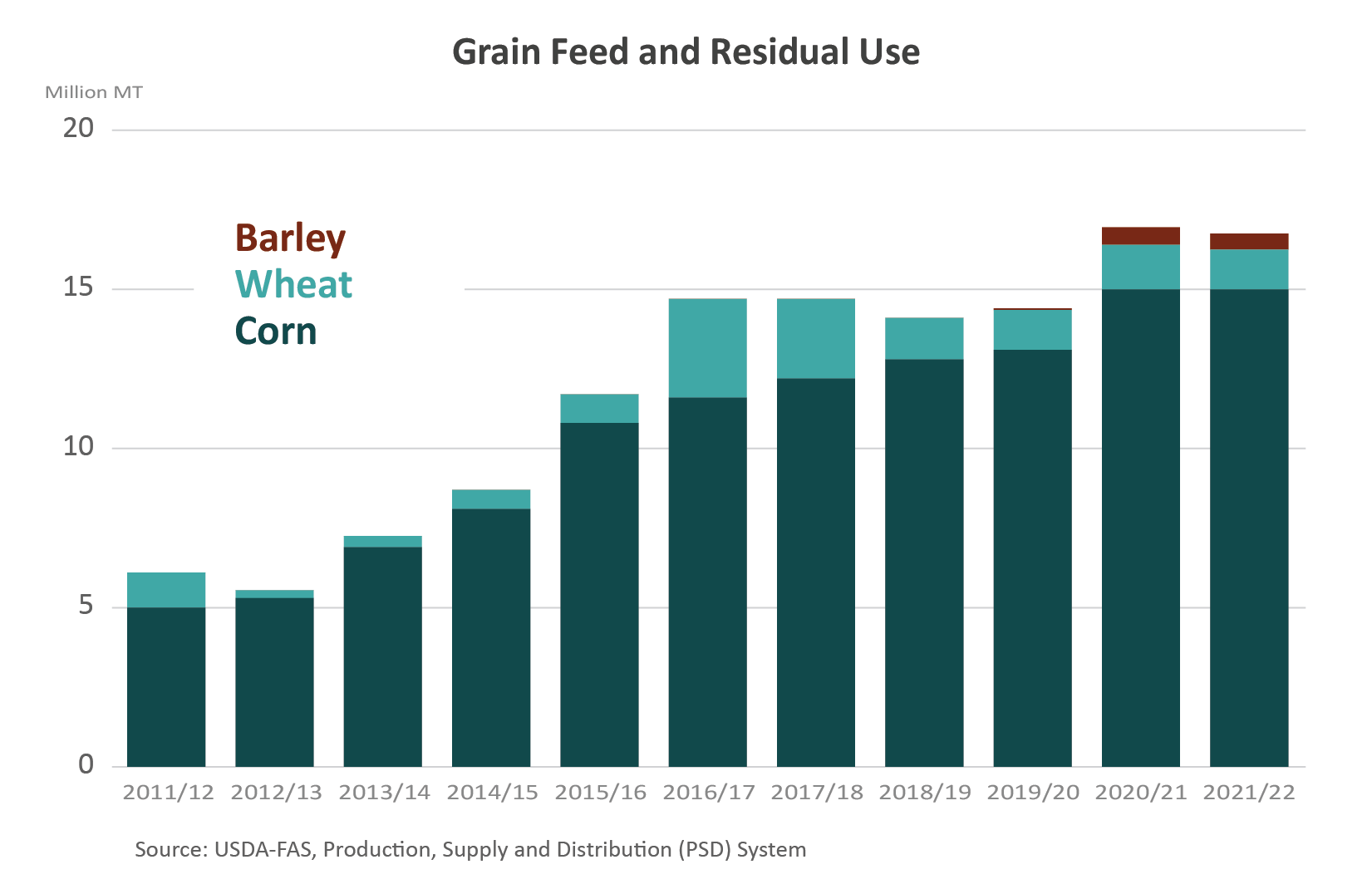 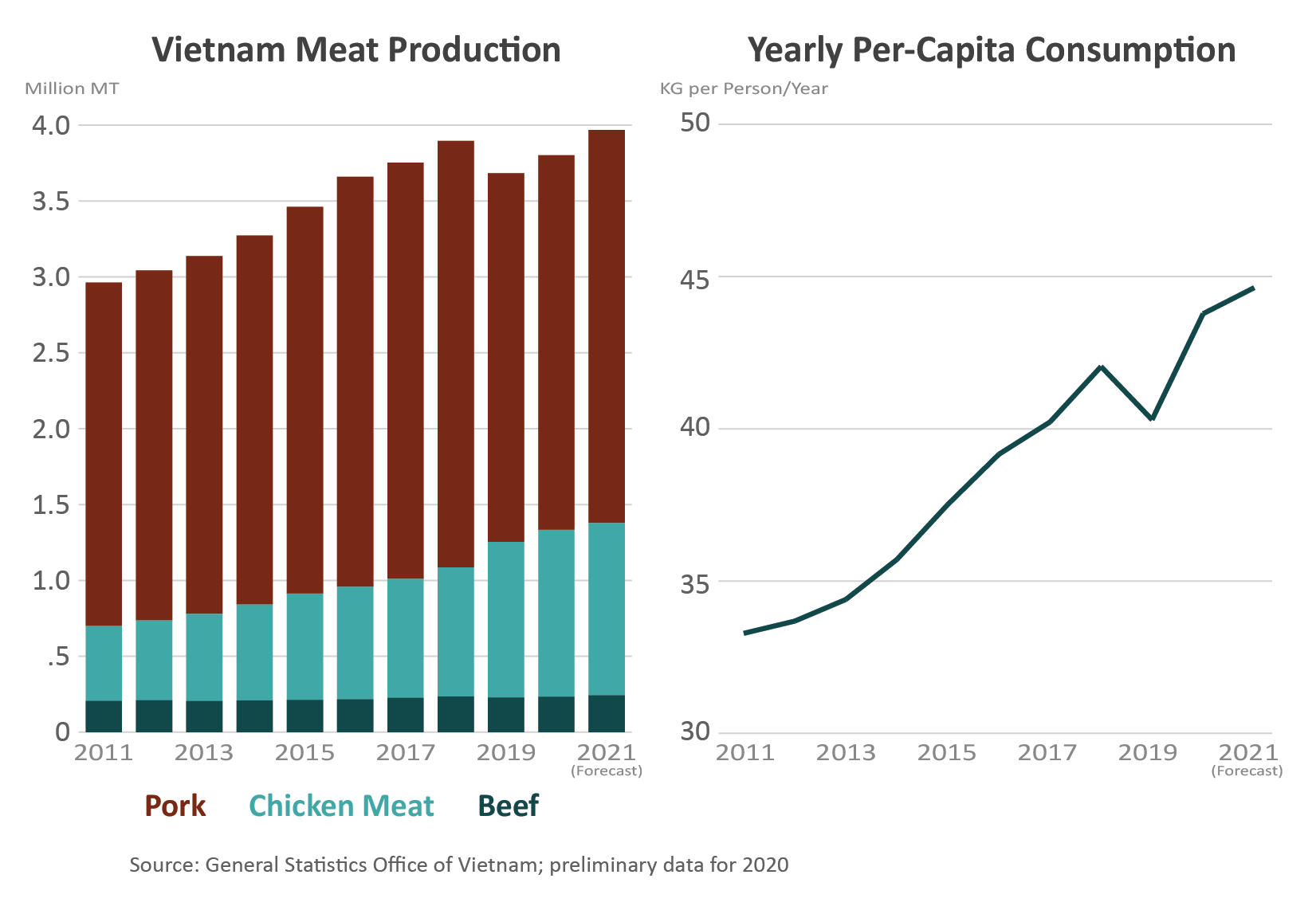 As a result of the abundant imports, Vietnam’s corn feed and residual use has continued to push higher, tripling in the span of 10 years. Corn makes up the majority of grain feed and residual use, vastly eclipsing wheat and barley. Reflecting this higher level of feed use, a similar trend can be seen in meat production. Though overall meat production dipped in 2019 due to the ASF impact on pork production, chicken meat and beef production have both grown during the period. Total production across the three meats is expected to exceed 2018’s level in the current year. Increasing per capita meat consumption, supported by higher imports since the incidence of ASF, indicates that the demand for animal protein continues to rise. 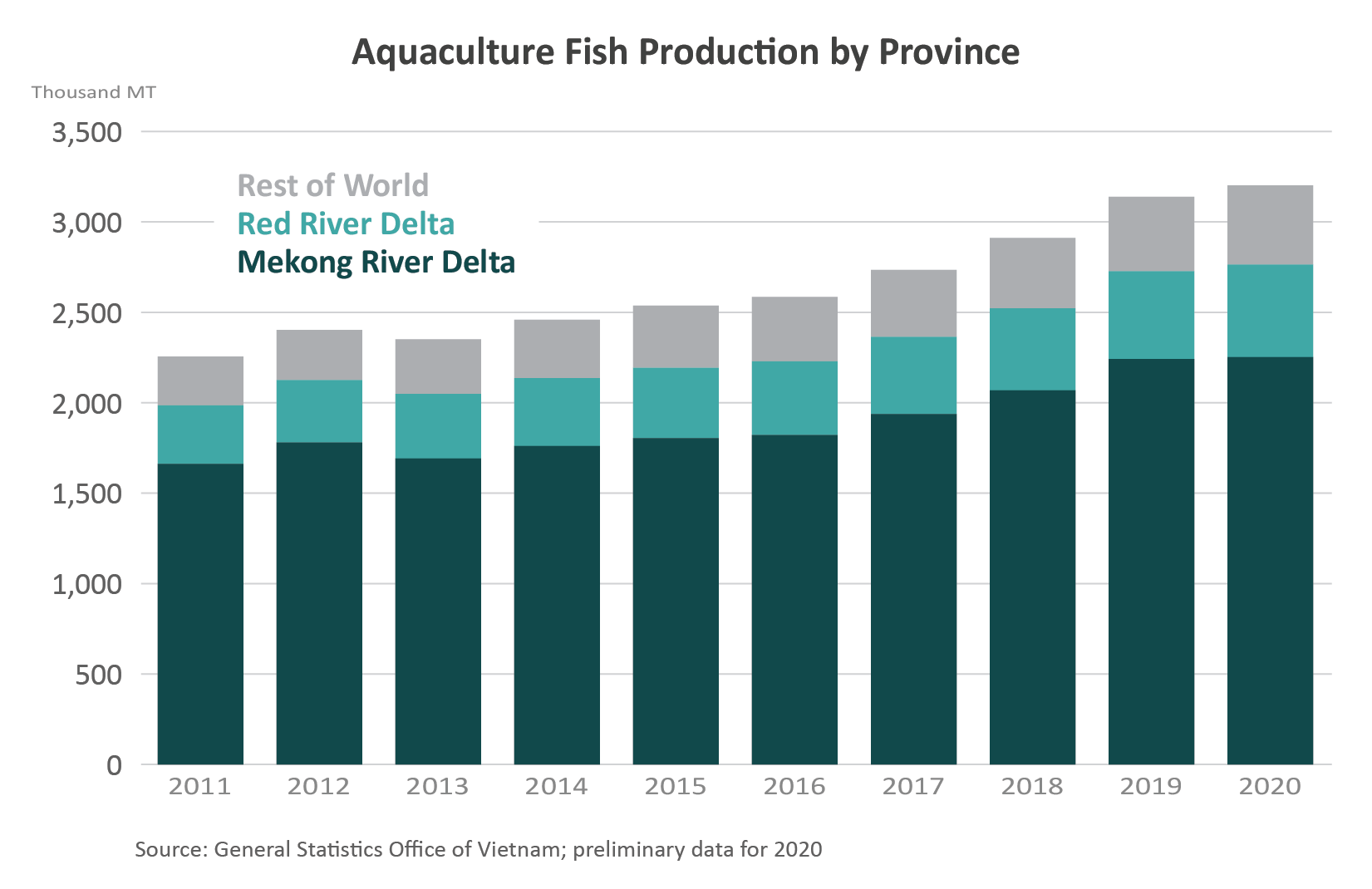 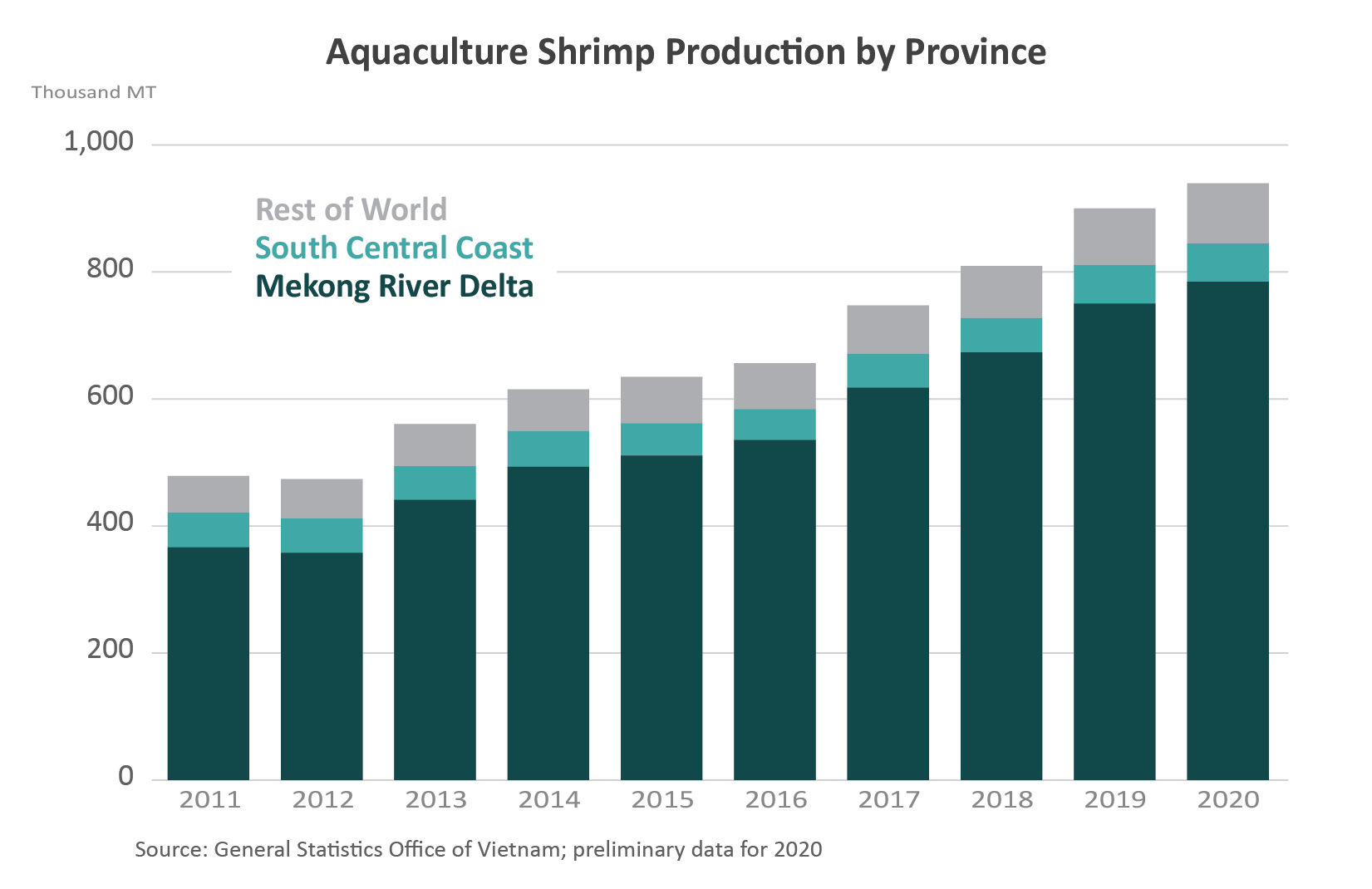 Unsurprisingly, most aquaculture production takes place near the deltas of the Mekong and Red Rivers. The Red River Delta is in the north, near Hanoi. The Mekong River Delta is to the south, southwest of Ho Chi Minh City. However, the latter is by far the more productive of the two rivers. Approximately 70 percent of Vietnam’s aquaculture fish and 80 percent of aquaculture shrimp are produced around the Mekong River Delta region, which encompasses 13 provinces in the southernmost part of the country. Vietnamese catfish is a major component of aquaculture production, known as swai or basa when imported in the United States. According to reporting by FAS/Hanoi of figures from the Vietnam Association of Seafood Exporters and Producers, exports of catfish in 2020 totaled $1.5 billion, down from the previous year due to impacts of COVID-19 on export markets. Official customs data indicates total exports of all fishery products in 2020 was $8.4 billion, making catfish exports a substantial contributor to aquaculture and fishery export values. 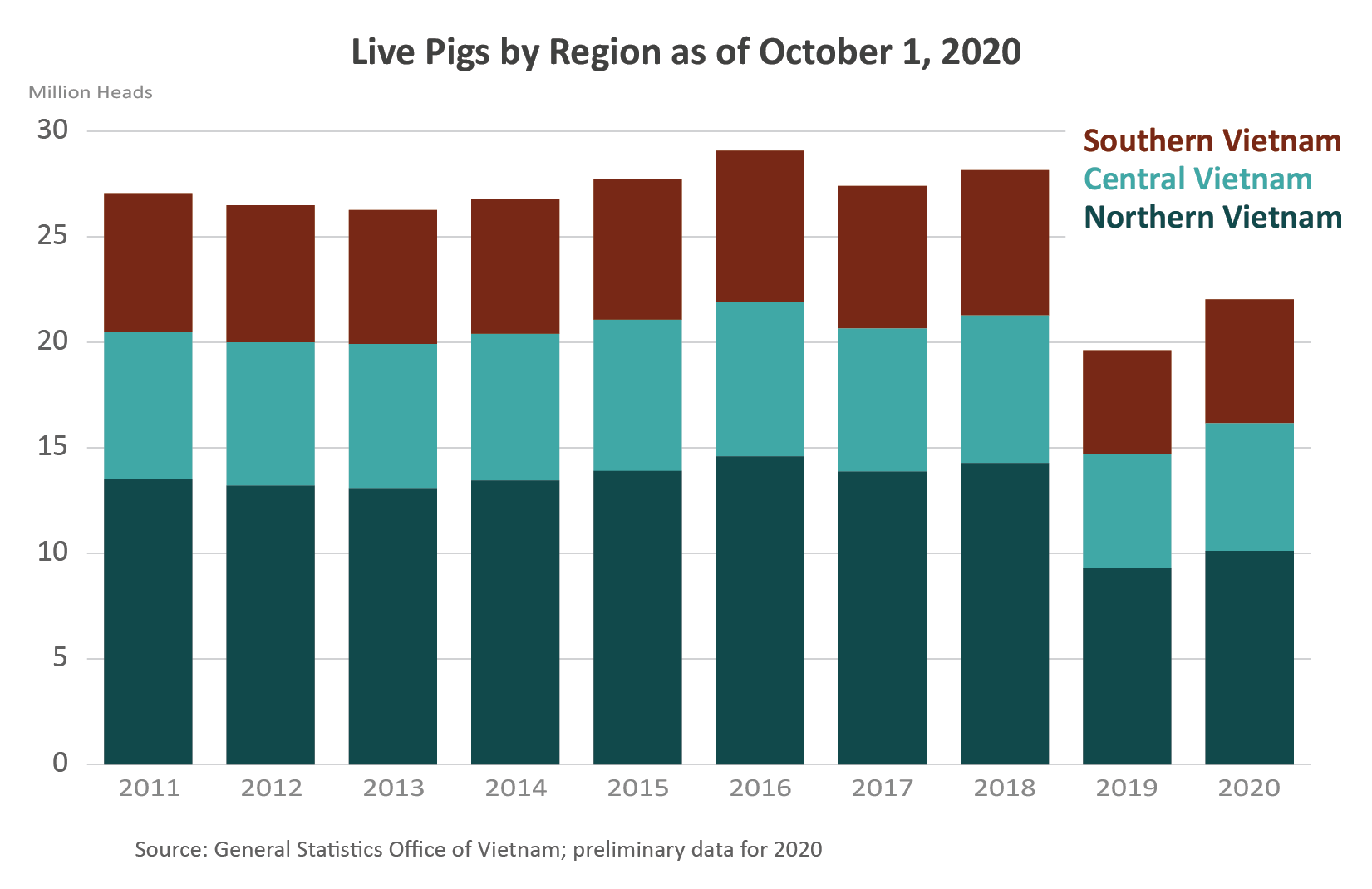 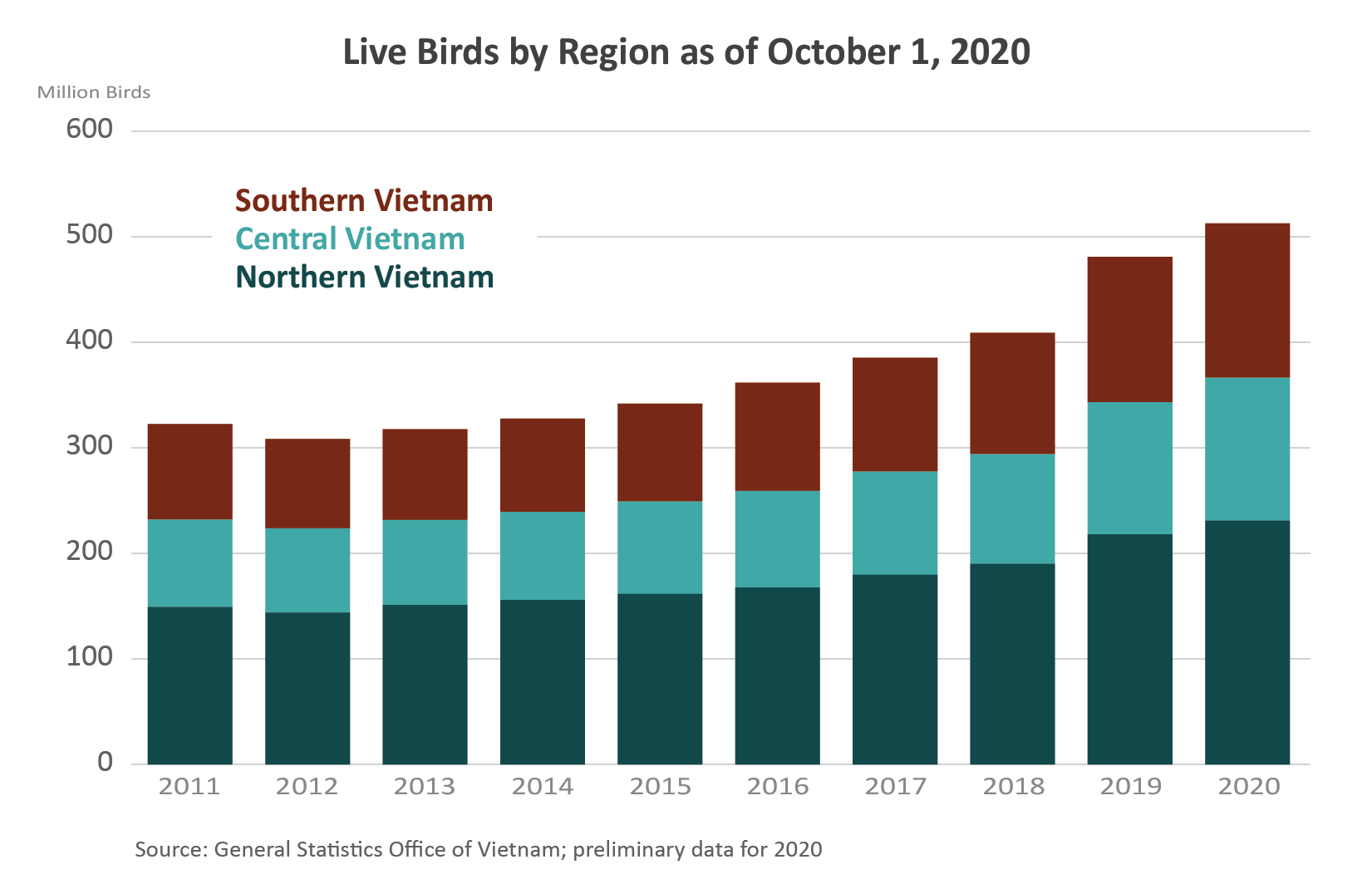 The General Statistics Office of Vietnam also provides live animal numbers as of October 1. Pigs and poultry (chicken and ducks) are less geographically concentrated than aquaculture species, but about half of the country’s pigs and poultry are kept in the three regions of Northern Vietnam: Northeast, Northwest, and the Red River Delta. As the region with the largest number of pigs, the Red River Delta was hit particularly hard by ASF, with the region’s herd contracting 42 percent in 2019. The response of the poultry sector to the decline in swine numbers can be seen clearly in 2019 as well: after several years of single-digit percentage growth in live birds, there was an 18 percent increase compared to the 2018 flock size. The recovery of the swine herd and positive jolt to flock size should continue to support feed demand in Vietnam.

Corn and DDGS, among other agricultural commodities, are common ingredients in land animal feeds. What are farmed catfish fed? A 2016 review of aquaculture feed in Asia indicated that the feed ingredients used in Vietnam include soybean meal, rice bran, and fishmeal.2 A 2009 feeding trial sponsored by U.S. Grains Council showed that DDGS can readily be added to Vietnamese catfish diets as well,3 demonstrating that it could substitute in limited quantities for other protein sources. Commercial aquaculture feeds in the United States include corn as an ingredient. Though the catfish species differ between the United States and Vietnam, growth in catfish feeds could represent further demand for corn in Vietnam. On top of the recovery of pork production and expansion of beef and poultry meat production, Vietnam’s growing aquaculture industry offers further opportunities for exporters of corn and DDGS as feed ingredients.