Venezuela is the 13th-largest market for U.S. agricultural exports, with sales totaling $1.7 billion in calendar year 2012. It is one of the fastest growing U.S. markets, due to a widening gap between local supplies and rising demand. Venezuela’s government policies have hobbled domestic production. As a result, there are growing opportunities for U.S. exports, despite strong competition and other challenges.

With a population of 29 million and the world’s largest petroleum reserves, the Bolivarian Republic of Venezuela (BRV) is the largest crude oil exporter in the Western Hemisphere. Petroleum accounts for 94 percent of export earnings, more than 50 percent of government revenue, and 30 percent of GDP1. Because of its heavy dependence on oil, the sharp drop in international oil prices in 2009-2010 led to economic contractions; in 2011-2012, high oil prices and record government spending helped boost GDP growth to 4-5 percent2.

The government has stepped up expropriations of farms, food manufacturers, and distributors, while declaring “economic war” on the private sector4. It created MERCAL, a major food chain that controls 45 percent of the country’s supermarkets. The BRV also manages 70 percent of agricultural inputs, such as seeds, fertilizers, and equipments. Mismanagement and shortages of inputs have hampered rice and corn production and will likely continue. Overall agricultural productivity has dropped, as most farms and food companies expropriated by the state suffer from inflated payrolls and inefficiency.

The government has stepped up expropriations of farms, food manufacturers, and distributors, while declaring “economic war” on the private sector4. It created MERCAL, a major food chain that controls 45 percent of the country’s supermarkets. The BRV also manages 70 percent of agricultural inputs, such as seeds, fertilizers, and equipments. Mismanagement and shortages of inputs have hampered rice and corn production and will likely continue. Overall agricultural productivity has dropped, as most farms and food companies expropriated by the state suffer from inflated payrolls and inefficiency.

Since 2003, the BRV has imposed price controls that affect a wide range of basic and processed food products. Stores are required to sell many foods at BRV-established prices. At MERCAL stores, subsidized food products are selling at even lower prices than the official controlled prices, sometimes at a 40-50 percent discount5. Producers and processors are not allowed to raise prices in step with growing production costs, which has squeezed margins and at times led to food shortages6. Domestic production has been stifled due to price controls, expropriation of land and agribusiness, lack of transportation, security concerns, lack of inputs, and growing labor force problems. As a result, Venezuela now relies on imports for 70 percent of its food consumption. 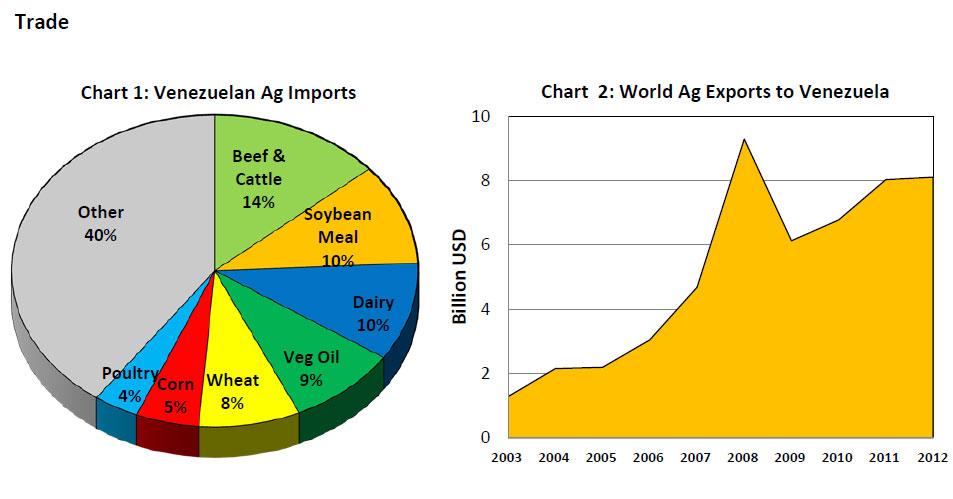 At $8.1 billion, Venezuela ranks as the world’s 18th largest agricultural market7. However, its average annual growth trend of 23 percent over the most recent decade has few rivals. Major imports include beef and cattle, soybean meal, dairy, vegetable oil (including soybean oil), grains, and poultry (chart 1). The government plays a significant role in imports as it controls permits, provides foreign exchange for trade, and carries out 50-60 percent of the imports through state-run entities. Venezuela has bilateral agreements with many of its Latin American trade partners that confer preferential tariff and foreign exchange treatments. In addition, it also has petro-agreements with many Caribbean countries, through which food can be imported via an exchange for oil, holding prices down somewhat in what is turning out to be a period of high world commodity prices8. The BRV’s heavy involvement in trade and reliance on oil revenue to finance it are partly responsible for the drop in imports during 2009, when oil prices declined (chart 2).

The United States is the second largest exporter of agricultural products to Venezuela, with a 21 percent market share (chart 3). U.S. exports consist mainly of grains, soybean meal, and fats and oils (chart 4). Venezuela is the largest U.S. soybean meal and corn market in South America. Most of the country’s corn and soybean meal imports (three quarters) are used to produce poultry feed, while a sizable portion (17 percent) goes into hog feed. Strong demand and freight advantage helped U.S soybean meal exports expand market share from eight percent in 2007 to 75 percent five years later, overtaking Bolivia to become the primary supplier. Venezuela is also becoming increasingly reliant on corn imports, as domestic production remains flat while demand, particularly from the feed sector, continues to rise. U.S. yellow corn has natural advantages due to its year-round availability and feed producers’ preference of U.S. corn over other origins. However, over the last two years Argentina has expanded market share thanks to direct BRV purchases as part of a bilateral agreement. 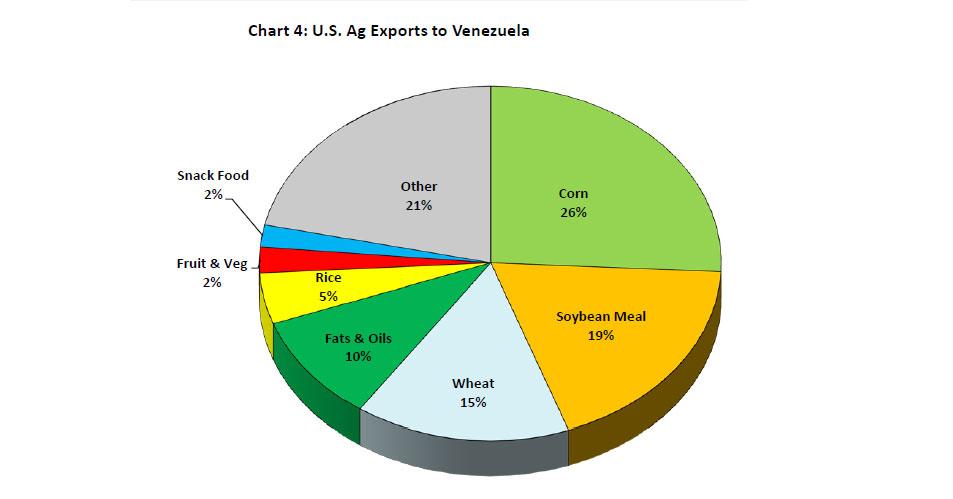 Venezuela is also the largest U.S. wheat and rice market in South America. Wheat represents 15 percent of U.S. agricultural exports. Pasta and other wheat products are part of the staple diet in Venezuela and the country has one of the highest pasta consumption rates in the world. The United States and Canada supply almost all of the wheat Venezuela consumes, as local production is insignificant due to climactic conditions. Though Venezuela was a net rice exporter as recently as seven years ago, the country currently relies on imports for nearly 40 percent of its rice consumption. Most of the imports are carried out by state-run entities. Although bilateral agreements favor Argentina, Brazil, and Guyana, the United States has remained one of the top suppliers, albeit exports have varied widely from year to year. The United States is also the dominant supplier of animal fats and one of the top exporters of vegetable oil.

Although U.S. exports have grown at a brisk average annual rate of 20 percent since 2002, competitors, particularly those in South America, have expanded exports even faster. Venezuela became a member of Mercosur in July, 2012. Mercosur members Brazil and Argentina are key trading partners. Brazil is the largest agricultural supplier to Venezuela, dominating the beef and poultry trade. Argentina is the third largest exporter, supplying dairy, vegetable oil, and corn. Colombia and Nicaragua are also important suppliers. Colombia used to be the primary exporter, until a diplomatic dispute in 2009 disrupted trade. A new agreement between the two neighbors in 2011 has boosted Colombia’s exports, which should continue to recover and grow in the future.

Beef and poultry highlight the difficulties facing U.S. exporters. At least 60 percent of Venezuela’s beef consumption is imported either as cattle for slaughter or meat, a rate that should continue to rise. Venezuela stopped being self-sufficient in beef production in 2003, and its cattle numbers have been declining steadily since the introduction of price controls, which is one of the major factors constraining production, along with land expropriations, personal and legal insecurity, high input costs, and inflation9. Most of the imports come from Brazil, which ships live cattle for slaughter as well as frozen beef. In addition, Argentina, Colombia, Uruguay, and Nicaragua also have market share, as these countries enjoy preferential tariff and foreign exchange treatments. Despite Venezuela’s growing import demand, U.S. shipments are not expected to take place anytime soon. U.S. supplies are not eligible for export to Venezuela due to Bovine Spongiform Encephalopathy (BSE) and lack of export protocol. In addition, U.S. beef and cattle are not price-competitive compared to South American suppliers, even in the event of Brazil being shut out of the market due to its recent BSE case.

Venezuela has one of the highest per capita poultry consumption rates in South America at over 30 kg, which is a third above neighboring Colombia. Poultry consumption constitutes over half of all meat consumption and is growing faster than other meats as it remains an inexpensive source of animal protein. The poultry sector is the most important component of Venezuela’s agricultural production, accounting for 30 percent of the country’s agricultural GDP10. Despite being well-managed and having the capacity to meet domestic demand, the poultry sector faces major competition from state imports of poultry from Brazil, which now account for about 24 percent of consumption. All poultry imports are controlled by the BRV and government imports from Brazil and Argentina origins are not subject to tariff or custom charges, and do not require foreign exchange applications. U.S. poultry (uncooked) is banned, ostensibly due to Avian Influenza.

U.S. exports face many challenges, chief among them are strong competition, bureaucratic hurdles, and Venezuela’s foreign exchange shortages. Venezuela’s bilateral agreements with many of its regional trade partners, in conjunction with direct state involvement in imports, place the United States on an uneven footing with competitors such as Brazil and Argentina. Bureaucracy and lack of planning have resulted in difficulties in obtaining import approval and a lengthy paperwork and authorization process. In addition, the Venezuelan authorities do not have enough dollars to pay for the level of imports that the country needs11. 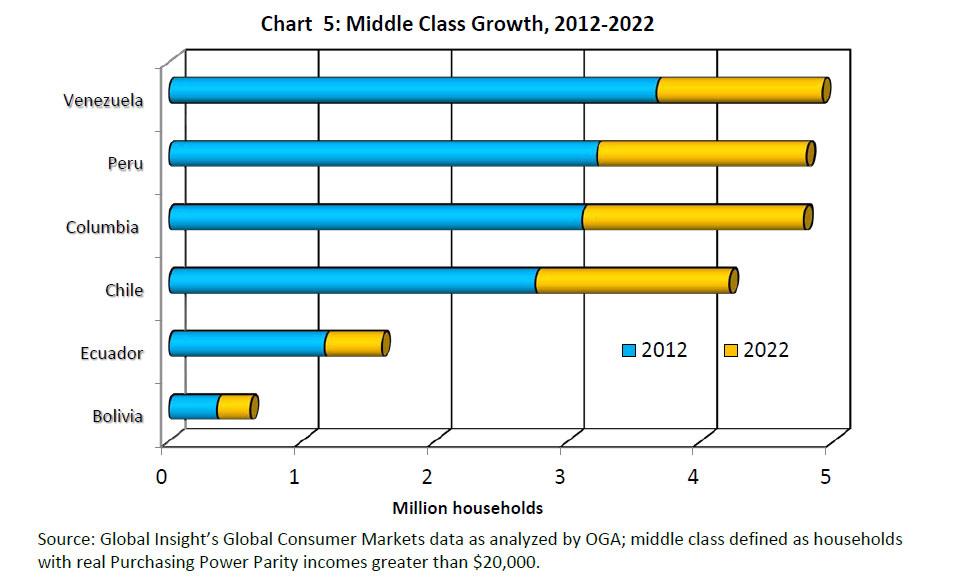 Despite the challenges, the prospect for U.S. exports remains positive. Venezuela’s statist economy has led to a deteriorating agricultural sector, diminished production, and frequent and prolonged food shortages. Barring any major crash in oil prices, the post-Chavez Venezuela will have to continue to rely on imports to meet its growing food demand. The country has the third largest number of middle class households in South America (after Brazil and Argentina), and is expected to expand by another 34 percent over the next decade (chart 5). As a major supplier, U.S. exports enjoy the advantage of lower shipping time and industry recognition of U.S. standards and quality. These factors, along with retail expansion and rising income, should help boost U.S. exports in the future, particularly for feed ingredients such as soybean meal and corn, food grains such as wheat and rice, and fats and oils.