Production of distillers dried grains (DDG), a byproduct of the ethanol production process, has soared in recent years as ethanol production has grown. The United States produced 34.6 million tons of DDGs in the 2010/11 crop year, nearly six times the level in of 2003/04, according to the USDA Economic Research Service (ERS). Increasing supply, coupled with high prices for competing feeds (soybean meal and corn) and foreign market development efforts by the U.S. Grains Council, led to a surge in U.S. DDG exports beginning in 2008. Exports now constitute about 22 percent of domestic DDG production and reached a record $1.9 billion in calendar year 2011, more than $200 million above the previous record set in 2010. Building on last year’s record exports, sales are off to a strong start in 2012 with shipments for the first four months of the year up 9 percent in value over the same period in 2011. Strong demand in top U.S. markets, combined with high expected prices for some competing feed sources, could lead to another record year in 2012. 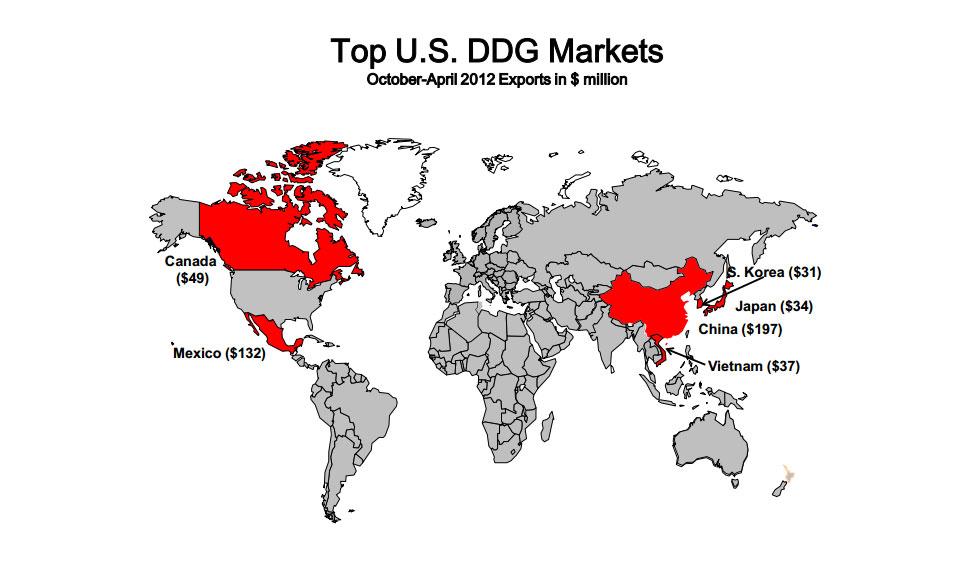 The relative feed value of DDGs is estimated at between 105 percent and 115 percent that of corn. However, since DDG production began to increase in 2008, the price has generally been less than the price of corn. There are many reasons for this, including transportability issues and challenges with incorporating DDGs into hog and poultry rations. As demand has grown in the U.S. beef and dairy industries and as foreign buyers have become more aware of the value of DDGs, the price has increased, particularly in the past six months. Beginning in May 2012, DDGs began trading at a premium to corn. As a result, the volume of shipments may slow somewhat in the coming months. 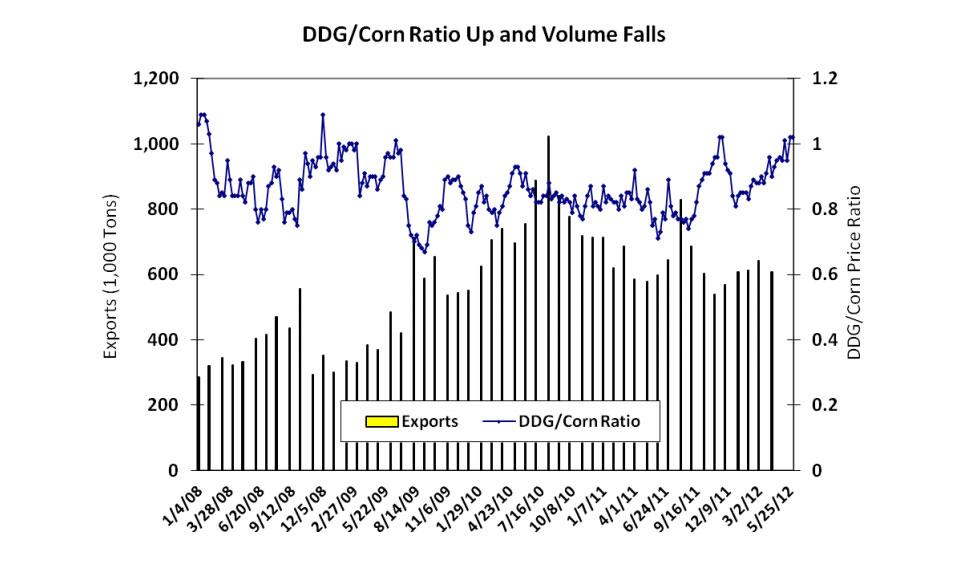 U.S. exports of DDGs to Mexico surged to a record $444 million in 2011 as Mexico became the top market, surpassing China by more than $100 million. Shipments to Mexico grew 57 percent from the previous year – the strongest growth among the top five markets. Mexico now accounts for about one fourth of all U.S. DDG exports, which are primarily used by the Mexican beef and dairy industries. Mexico’s proximity to the United States makes it a natural market for U.S. DDGs due to multiple transportation options, but a drought that devastated the 2011 corn crop in Mexico has further increased demand for U.S. DDGs. Though Mexico’s main 2012 corn crop is expected to be better than last year’s, it will not be harvested until the fall and thus DDG import demand should remain strong over the next several months. Once the principal Mexican crop is harvested, continued strong demand for U.S. DDGs will depend in part on how Mexican corn prices compare with U.S. DDG and corn prices. Currently, DDGs are priced as a slight premium to U.S. corn. However, despite the relative price relationships, Mexican beef and dairy operations are increasingly familiar with DDGs, making it likely that Mexico will continue to be a top markets for U.S. DDGs.

In 2011, the European Union was the fifth-largest U.S. DDG market. However, exports have nearly ceased, with shipments for the first four months of 2012 reaching only $3 million, compared to $50 million during the same period last year. U.S. exports to the EU were unusually high during most of last because the EU approved several genetically enhanced (GE) corn events in order to re-open the EU market to U.S. soybean exports. U.S.soybean exports to the EU fell after dust from unapproved GE corn events was detected in U.S. soybean shipments. As necessitated by the need to import soybeans, the EU response brought EU corn approvals temporarily into line with U.S. approvals, thus re-opening the EU market to U.S. DDG exports. However, shipments to the EU began to drop in October and November as new corn events were commercialized in the United States but not in the EU. The presence of these non-approved U.S. events in the corn supply brought about the dramatic slowdown of DDG exports.

As shipments to the EU began to slow, China returned as a major market. After a very slow start in 2011, U.S. shipments to China have not fallen below $25 million a month since September. China is the top market for U.S. DDGs thus far in 2012. Given current corn prices in China, imports of U.S. DDGs are likely to continue strong throughout the year. Concern over potential trade action by the Chinese government against U.S. DDGs has subsided and demand from the pork and poultry industries remains strong. With commercial feed production in China expected to grow over the next several years at nearly five percent annually, the outlook is bright for continued strong exports.

Exports of DDGs could reach a record in terms of value in 2012, even as corn oil extraction increases. Industry sources estimate that, at the start of 2011, about one third of U.S. ethanol plants were increasing oil extraction from DDGs, thus producing low-fat DGGs with oil content generally less than 9 percent. By the end of 2012, many analysts believe that more than 80 percent of U.S. plants will shift to production of low-fat DDGs. This could have both positive and negative impacts on U.S. exports. For example, transportability, consistency of product by plant, and feed value for dairies could increase. However, the lower oil content may result in the decreased feeding value for foreign pork and poultry operations. Nevertheless, given the strong pace of exports for the initial months of 2012, the dollar value of U.S. DDG exports could set another record this year.

Morocco has become the 15th-largest fruit exporter in the world by value. According to the most recent estimates (2019) by the Food and Agriculture Organization of the United Nations (FAO), 66 percent of its land area is devoted to agriculture, with more than 7 percent devoted to fruit production.