Sweden is the top market for U.S. beer products in the region, followed by the Netherlands, Denmark, and Norway (see Table 1). According to Euromonitor, the COVID-19 pandemic resulted in a significant decline in beer sales2 in the Netherlands, Sweden, Denmark, Finland, and Iceland due to temporary lockdowns and less dining outside the home. Norway experienced an increase of overall volume of beer sold due to strong sales at modern grocery retailers. Craft beer, as opposed to mass produced beer, is produced by small and independent craft brewers. According to the Brewers Association, craft brewers are innovative, develop new styles that have no precedent, and have unique approaches to connecting with their customers and communities. Craft beer is usually made with traditional ingredients, including malted barley, and non-traditional ingredients to add distinctiveness. The number of craft breweries and sales of craft beer in the Netherlands and Scandinavian countries have been increasing for the last five years (see Chart 1, Tables 2 and 3). Despite the COVID-19 pandemic, these European markets remain reliable destinations for U.S. craft beer products.

Chart 1: Trend of Craft Beer Sales in the Scandinavian Region 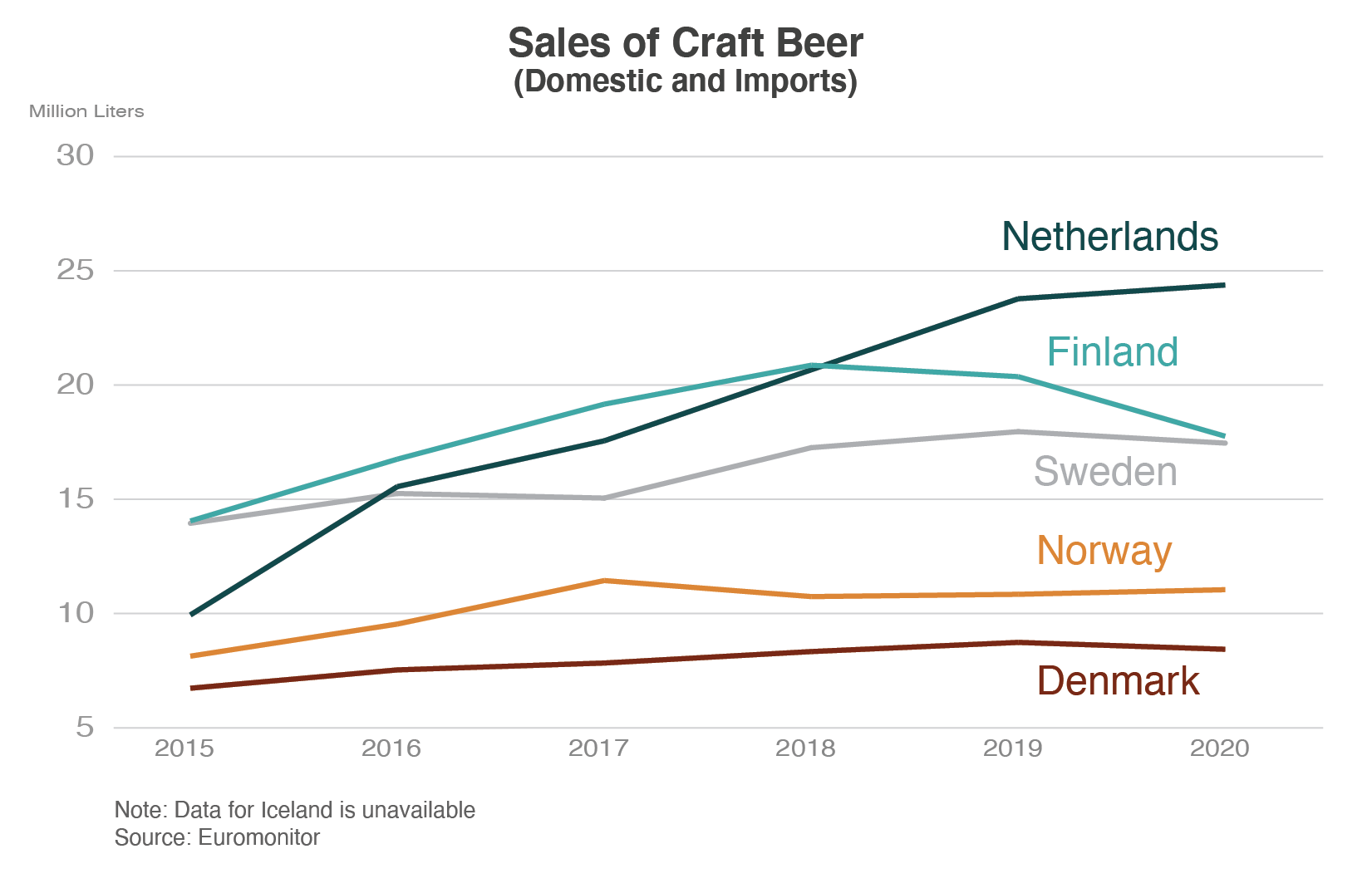 Craft Beer in the Netherlands – Opportunities Are Growing

The Netherlands is a strong market for U.S. craft beer because (1) Dutch beer consumers are looking for new and interesting craft beer and (2) interest in craft breweries is expanding in the Netherlands.

Based on USDA research, Dutch consumers have been interested in beer products with a unique story around the brand and locality. They also lean on products that have a distinctive taste (e.g., carrot cake beer), production methods (e.g., using bourbon, whiskey, and gin barrels), packaging, and unique labeling (e.g., organic, gluten-free, or alcohol-free). Consumers continue to purchase India pale ales (IPAs) and stouts. More recently, barrel-aged craft beer and beers brewed in big cities are becoming more popular due to their connection with the city’s food culture. Dutch consumers who visited U.S. cities for vacation are more inclined to try the beer from that city.

Approximately 15 percent of the Dutch craft beer market is imported. The United States holds a 0.3 percent market share, which has been growing. Belgium (61 percent) is ranked at the top, followed by Germany (15 percent) and France (8 percent). Prior to COVID-19 quarantine measures, imports had been growing at a double digit rate each year. Heineken remains the largest beer brand in the Netherlands with a market share of 38 percent. However, Dutch craft beer continues to be relevant as the number of craft beer breweries are up in 2020 (see Table 2). Overall, the market offers a great diversity of beers and foreign beer styles, which Dutch consumers are willing to try if the craft beer has a unique story.

Table 2: Number of Breweries in the Netherlands

Table 3: Number of Breweries in the Scandinavian Countries

Consumers from the Scandinavian countries have varying preferences towards craft beer (see Table 4). In most Scandinavian countries, alcohol-free and low alcohol beer products are gaining in popularity as more consumers are becoming health conscious. U.S. exporters of specialty craft beer, including organics, may find more success in Denmark and Sweden. Demark has the highest consumption of organic food products in the world. In most markets, beer-in-a-can is also attractive to consumers as cans help lengthen the freshness of the beer and are easier to transport. The United States has a stronger presence in some Scandinavian markets than others but faces competition from other European beer producers, including Belgium, Germany, and Czech Republic. European competitors do not face high transportation costs as U.S. exporters do.

Table 4: Summary of Craft Beer Trends in Scandinavian Countries and the Netherlands

For distilled spirits, the Netherlands is the top market in the region, followed by Sweden, Denmark, Norway, Finland, and Iceland (see Table 1). Whiskey and bourbon account for 56 percent of total U.S. distilled spirit exports to the region, whereas vodka, grape brandy, and gin comprise the remaining. Distilled spirit sales in the region were down due to the COVID-19 pandemic, except in Finland, Sweden, and Norway. According to Euromonitor, sales through supermarkets, convenience stores, and other retail in Finland, Sweden, and Norway performed higher than sales through restaurants and bars. However, distilled spirit sales are expected to rebound in the Netherlands and Denmark as bars and restaurants re-open and more outdoor events are held. Consumers in the region demand different types of distilled spirits, including organic gin, bourbon, and other types of whiskey (see Table 5).

The United States faces stiff competition from other EU and European countries, including the United Kingdom, France, and the Netherlands. Additionally, U.S. whiskey exports have been subject to 25 percent retaliatory tariff in the EU since June 22, 2018. However, on October 30, 2021, the EU reached a deal with the United States and will suspend additional duties imposed on U.S. exports, including whiskey.

Table 5: Summary of Distilled Spirits Trends in the Netherlands and Scandinavian Countries

The European Markets Remain a Key and Steady Destination for U.S. Craft Beer and Spirit Exports Due to Population Size and Income

The Netherlands and Scandinavian countries are highly developed economies with a substantial population size and high standard of living, which will support demand for U.S. craft beer and distilled spirit. The real gross domestic product (GDP) per capita ranges from $47,300 to $63,600 (see Table 6). The population of the markets make up 7 percent of Europe’s population. In contrast, the three most populated European countries (Germany, France, and the United Kingdom) account for 11 percent. The Netherlands has been the gateway for U.S. products into the European Union (EU) and other countries because of access to the Port of Rotterdam, Schiphol Airport, the two major European rivers, and excellent road and railway infrastructure.

With the EU eliminating retaliatory tariffs on U.S. whiskey and the re-opening of restaurants and bars, the potential for future growth for U.S. craft beer and distilled spirit exports is promising. Beer and spirit drinkers around the world will continue to seek out premium products. U.S. craft beer and distilled spirit exporters should be aware of different market trends in the region. Some markets favor different alcohol content, taste, and premiumization than others. In general, U.S. products continue to be known for their high quality, especially in Finland, Denmark, the Netherlands, Sweden, and Norway.