Peru Wheat Production Limited by Competition from Corn and Quinoa

The Peruvian wheat crop for 2014/15 is estimated at 150,000 hectares (Ha) with a trend yield of 1.52 metric tons per Ha (MT/Ha), for a projected production of 230,000 metric tons (MT).  Wheat area is estimated to decrease three percent this season from last year.  Wheat area growth remains very limited as corn and a fairly new export, quinoa, continue to compete for the same ground. Production is forecast to dip just over two percent for the coming year from the 235,000 MT estimated in 2013/14.  Corn for the upcoming season is forecast to be grown on 550,000 Ha with an early forecast yield of 3.27 MT/Ha for a projected production of 1.8 million metric tons (MMT).  Corn area is expected to increase almost six percent in the coming year.  Corn production is expected to increase five percent during this season, over the 2013/14 production of 1.72 MMT.  The country will continue to import both wheat and corn as domestic production is insufficient to cover domestic consumption.

Wheat remains a minor crop in Peru with most of the production concentrated in the temperate, southern highlands.  Grown at 2,800 to 3,500 meters above sea level, production remains limited by geography as well as current economics.  The Peruvian farmer cultivates only about two hectares of wheat, on average.  While wheat production has increased slightly since 1994, it has remained relatively stable for the last six years at around 225,000 MT. 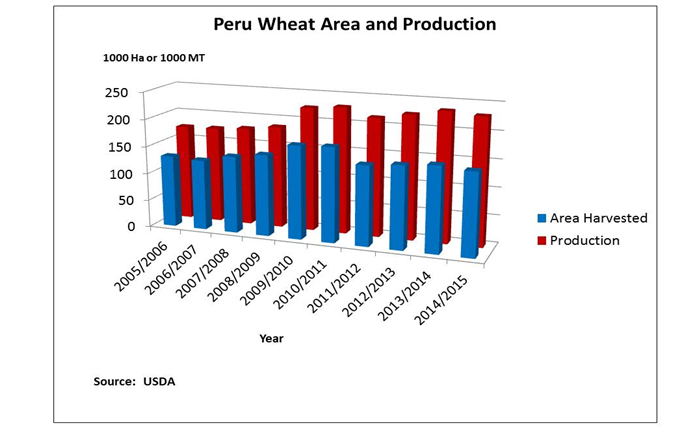 Taray, a durum wheat variety, is grown commercially.  Domestic millers promote durum wheat production by providing small farmers with seed and technical assistance and by purchasing production in advance.  Peru is the second largest pasta consumer in South America.  Consumption of pasta in Lima alone accounts for half the pasta utilized in the country.  Much of the pasta in Peru uses durum wheat.

There is an increasing diversity of wheat needs by the milling industry for different uses including blending of wheat types, but wheat production still has not grown appreciatively over the last several years.  Harvested area for wheat varies from one year to the next depending on profitability expectations (relative to corn, quinoa, barley, and oats), weather conditions, and crop abandonment.

Planting of wheat can begin in September with Peruvian wheat continuing to be seeded as late as December, depending on field altitude.  Harvest runs from January to April for the main crop.  A second, smaller crop can also be planted, usually in April to May, for a July to August harvest.  Wheat is often rotated year-to-year with dry bean plantings.  This rotation crop provides the small, low-income farmers with an alternative food source, forage for livestock, and allows the soil to recoup some of the nitrogen needed for the following wheat crop.  Use of mechanization on these small farms is minimal, and crop losses relatively high.

The poultry industry is growing in Peru and more land area is shifting into corn to provide feed—another competitor for land area in the country.  Over the last 5 years, yellow corn production has grown steadily in concert with growing feed demand.  Yellow corn varieties are grown primarily for Peru’s animal feed industry.  Most of the rest of corn produced is from what is referred to as high starch varieties and goes primarily for human food.  The yellow corn/starchy corn planting ratio is estimated to be roughly 55:45.  Improved seeds, fertilizer, irrigation, more sophisticated cultivation practices, and increased prevalence of mechanized equipment have led to improving yellow corn yields, especially along Peru’s coastal agricultural regions but also in some inland areas. 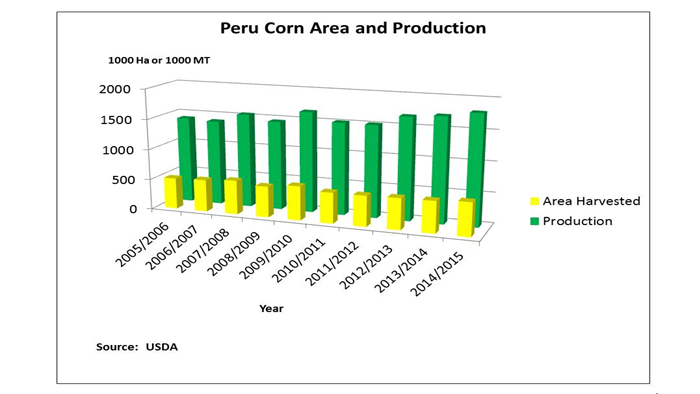 Wheat farmers in Peru may be considering more quinoa production on some of the land used for wheat due to the more lucrative pricing for quinoa.  Quinoa has a protein content of 12.5 to 16.7 percent, more than that of other grains such as wheat, corn, or rice, and thus is promoted as having health benefits.  Quinoa has also gained recent status as a superfood, for its nutritional benefits, resulting in an expanded market and a premium price structure for the pseduocereal (botanically, quinoa is not in the cereal grain family).The World bank, In collaboration with the Peruvian Ministry of Agriculture’s AgroRural program and partners, has financed several projects to improve quinoa production and marketing in the poorest regions of Ayacucho, Apurimac, Huancavelica, Huánuco, Junín, and Pasco.  This activity is part of a global campaign to promote the virtues of quinoa as a highly nutritious food and a flagship product for Peru.  In Peru, the Puno region still produces the most quinoa, with about 82 percent of total production.  The other leading production areas include Junín, Arequipa, Cusco, Huancavelica, Ancash, Ayacucho, and Apurímac.  In 2012, Peru’s production was more than 44,000 tons of quinoa, up from 30,000 tons in 2006.   Quinoa remains a specialty grain and approximately 90 percent of Peru’s quinoa is produced for the export market. 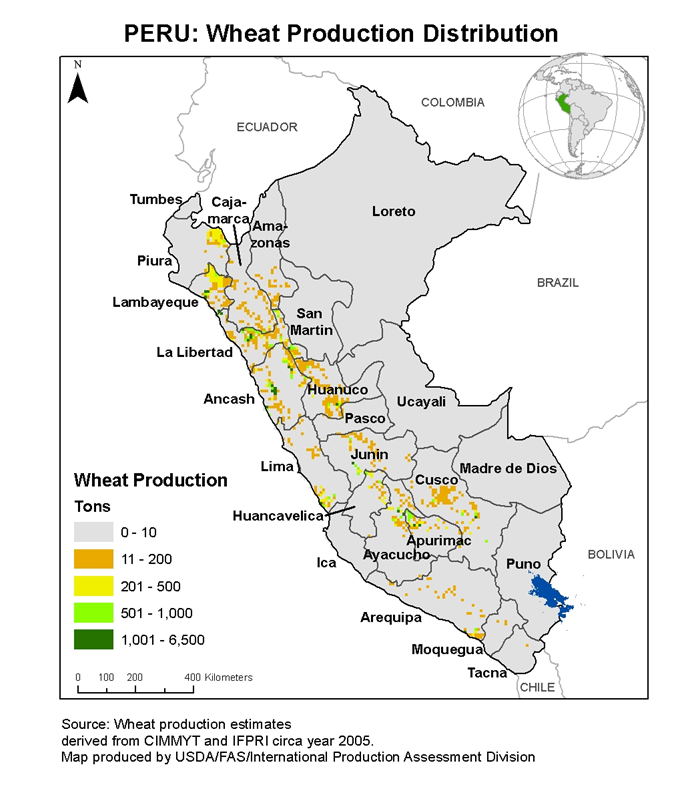