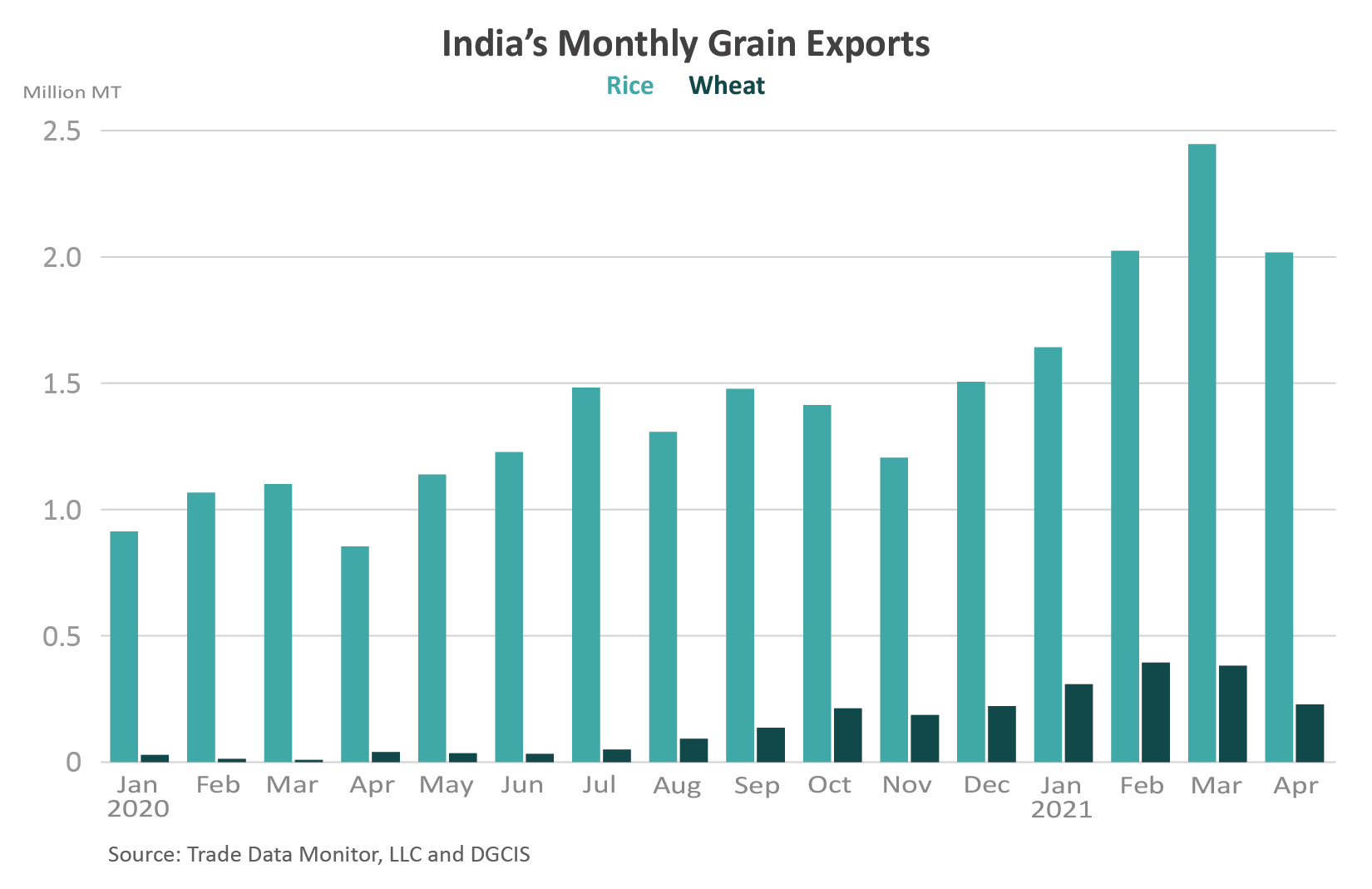 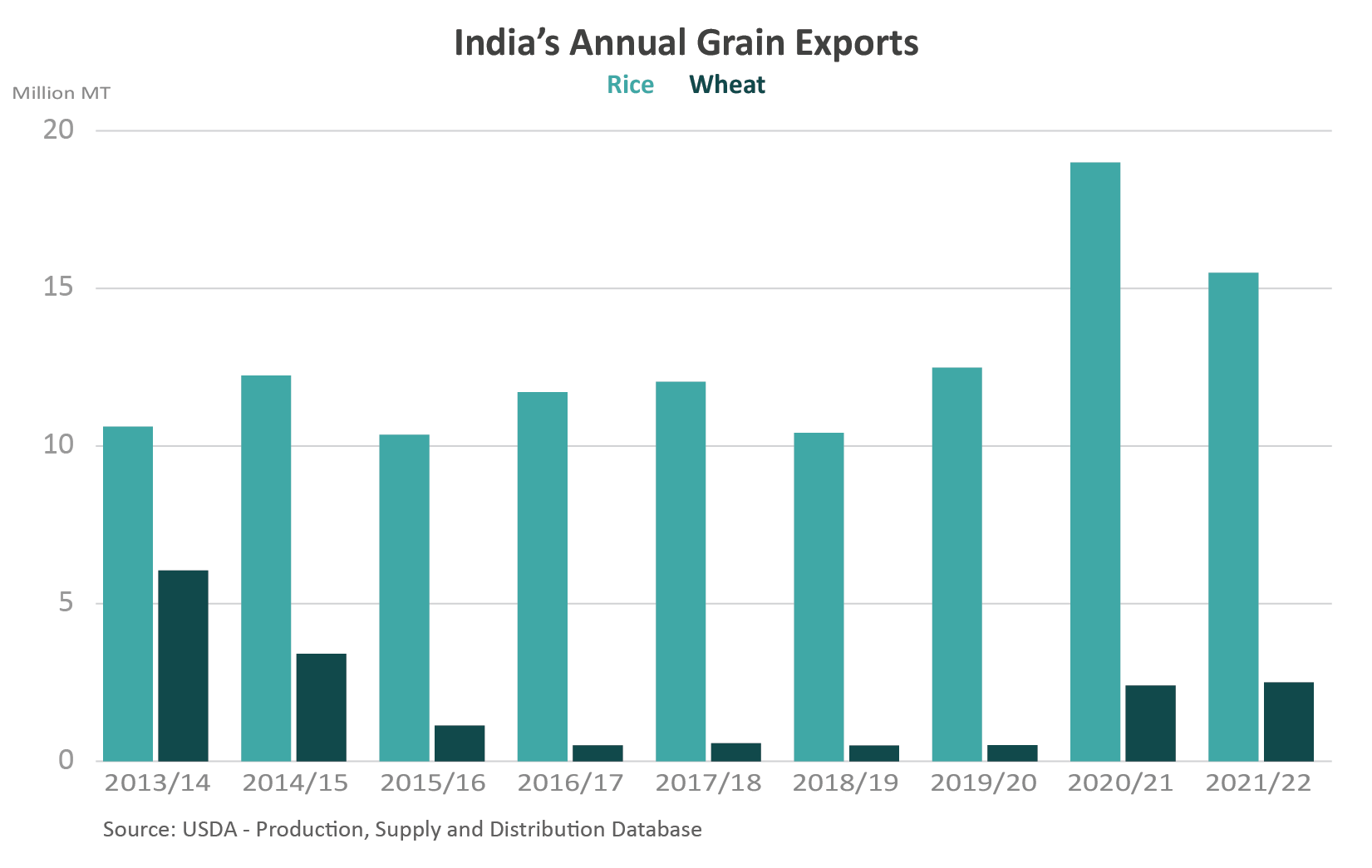 Global prices for wheat and rice have risen during the past year due to lower production, export restrictions among major suppliers, and strong foreign demand. India produced bumper crops for both commodities in 2020/21 and has significantly increased its exports starting in July 2020. The current 2020/21 forecasts are for record rice exports and the highest wheat exports since 2014/15. While exports are forecast to decline slightly for rice in 2021/22, export volumes are still forecast to be well above recent levels.

India plays a significant role in grain production as the second-largest producing country for both wheat and rice. During the past decade, India has consistently increased its minimum support price (MSP) for most supported commodities, including wheat and rice, leading to large areas dedicated to producing each crop. The government procures large quantities of wheat and rice annually and maintains substantial government stocks. The MSP has been under scrutiny by other World Trade Organization (WTO) member countries for its high level of domestic support.

COVID-19 has affected the Indian grain market in significant ways. Disruptions started in April 2020 as the government suddenly imposed a COVID-19 lockdown. Despite initial concerns, the wheat harvest proceeded without major disruptions, although farmer delivery to government procurement centers was delayed in some cases. The stay-at-home orders initially caused disruptions at the ports; however, these were resolved within a couple of months, enabling exports to expand. The 2021 wheat harvest was completed without major issues and the rice crop will be harvested this autumn. 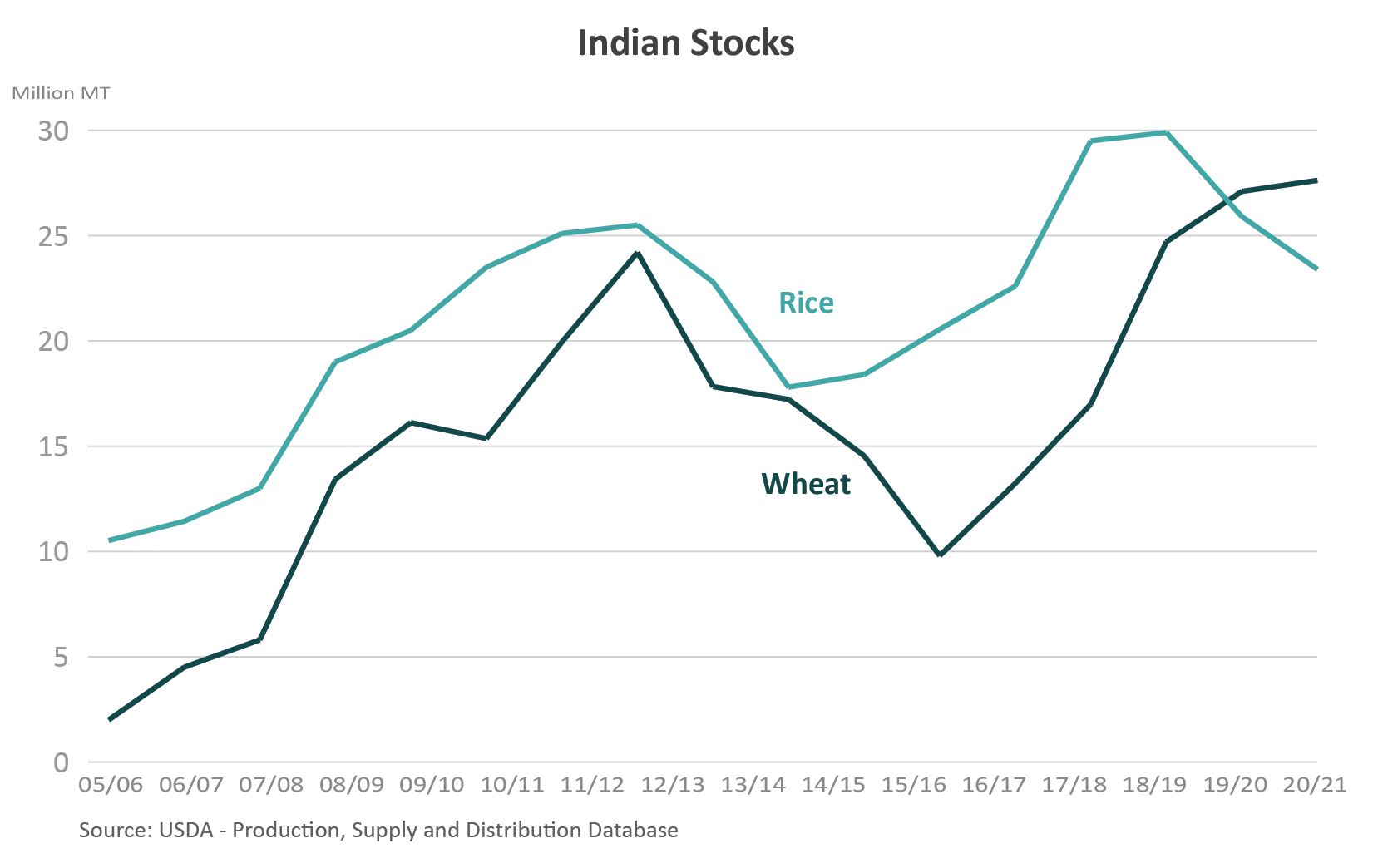 In April 2021, India notified the WTO for the second consecutive year that its domestic support for rice had exceeded its WTO commitments. Likewise, India notified the WTO that the country used the WTO Ministerial Decision on Public Stockholding for Food Security, also for a second time.1 The government program of procuring both rice and wheat from farmers for its consumer subsidy program has resulted in very high levels of stocks The chart demonstrates how the Indian grain stocks have grown significantly over time, specifically for rice and wheat.

The Government of India has guaranteed continually increasing MSPs for producers, but also provides wheat and rice to the majority of its consumers at highly discounted rates. The India National Food Security Act enabled about two-thirds of the population to access wheat and rice at heavily subsidized prices. Therefore, despite high and rising MSPs, most consumers have paid prices that are low and stable at only 2000 rupees/ton2 for the recipients of the public distribution system. This has resulted in consumption increasing, despite higher prices paid to producers through rising MSPs. In addition to the regular distribution of rice and wheat under various government programs, additional cost-free allocations have taken place since 2020 to offset the economic impact of the COVID-19 pandemic. In significantly increasing its allocations of rice and wheat, the Indian government is depressing domestic market prices, despite increasing the MSPs paid for these two commodities. 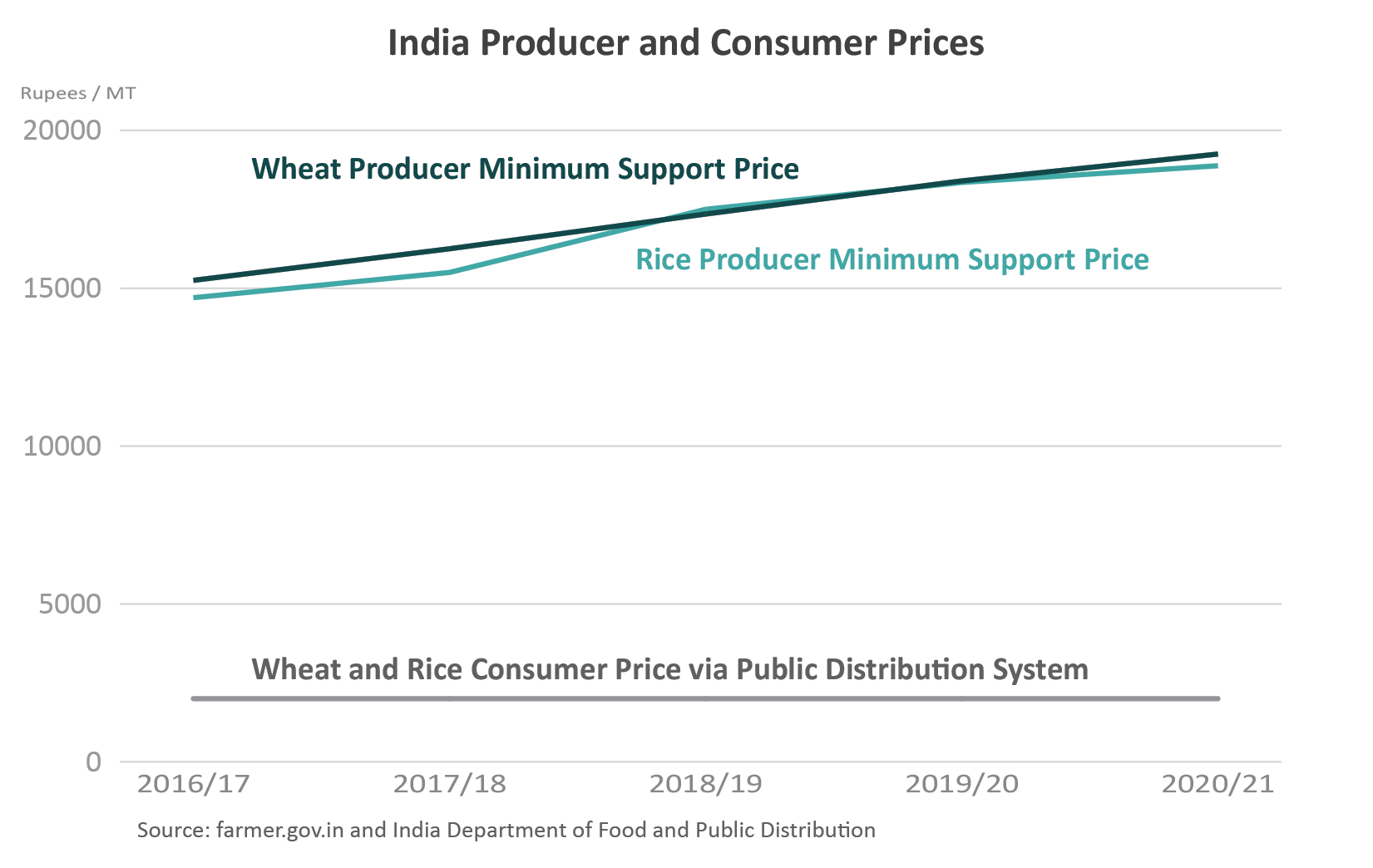 Even with the additional domestic consumption of food grains, India is now expected to have the highest wheat exports in several years, as well as record rice exports. While each grain has its particularities, there are common themes as Indian grain exports to neighboring countries have risen amid tighter exportable supplies among some competitors, strong demand from nearby countries, and competitive prices as other global exporter prices have risen sharply. 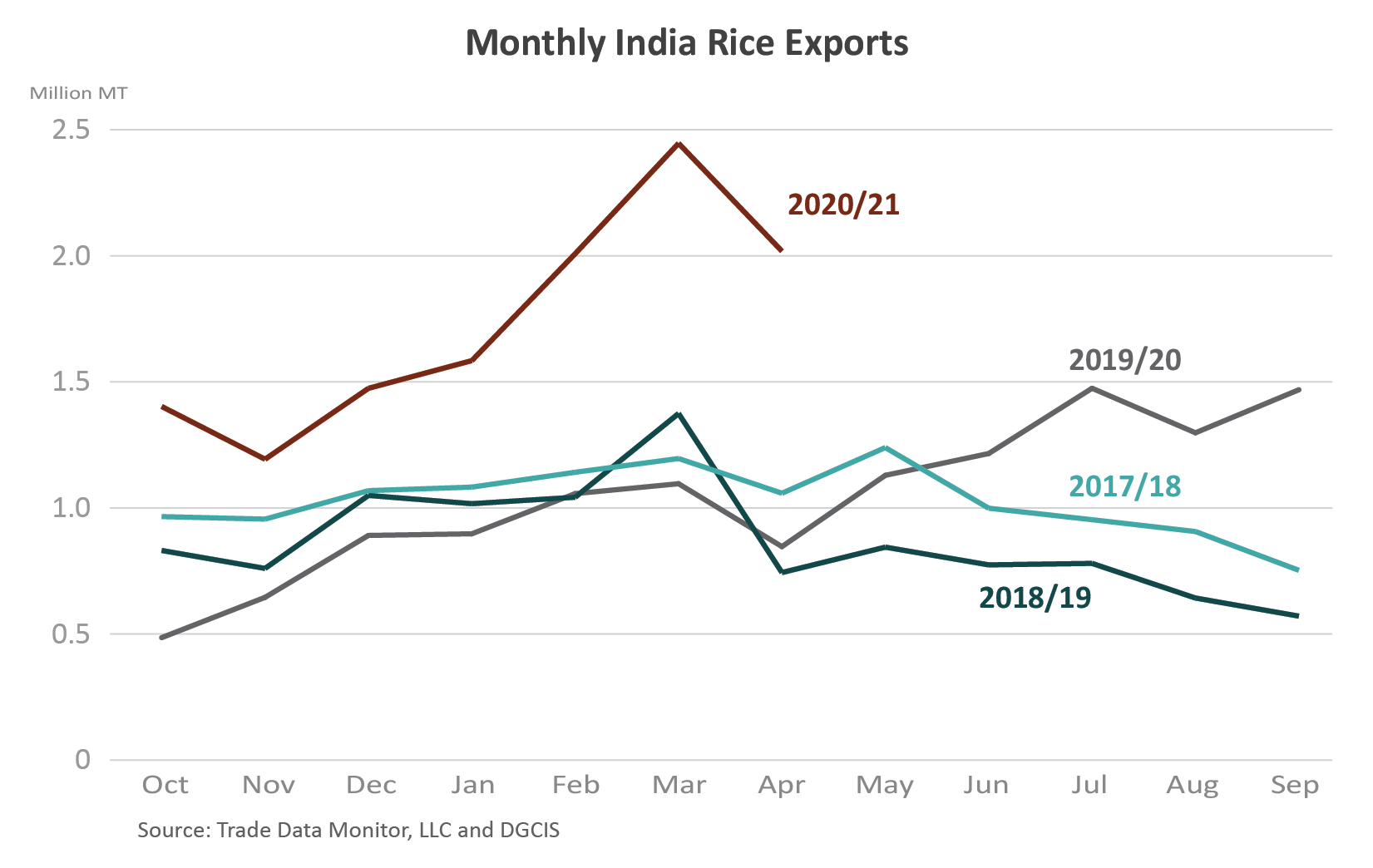 India boasts record 2020/21 rice supplies with its fourth consecutive record crop and record beginning stocks. Compared to the previous year, consumption rose by more than 5 percent with a sharp increase among the low-income population, due to the government distribution of additional rations in response to COVID-19. Despite the additional consumption, Indian rice exports rose to a record in 2019/20, exceeding the volume of Thailand and Vietnam exports combined, and are set to do the same in 2020/21, given the strong exports in the first half of the year. With another bumper crop forecast for 2021/22, Indian exports are forecast to dominate the global rice market, though with slightly lower exports than the prior year.

India has historically been a major rice exporter and the world’s largest since overtaking Thailand in 2012. India’s market share in global rice trade has expanded during the past year, especially with tighter exportable supplies from other exporters. In the case of Thailand, its drought-reduced crop and strong domestic demand resulted in the highest prices in 7 years and lowest annual exports in 23 years. Meanwhile, between March and May 2020, other Southeast Asian suppliers implemented export bans and quotas that further disrupted global supplies. As China began to use more of its old-crop rice domestically, its exports also tumbled. Among the major Asian exporters, prices escalated during the past year, whereas Indian prices remained low until Bangladesh began buying significant volumes in early 2021. Nevertheless, Indian quotes remain the lowest among major suppliers. 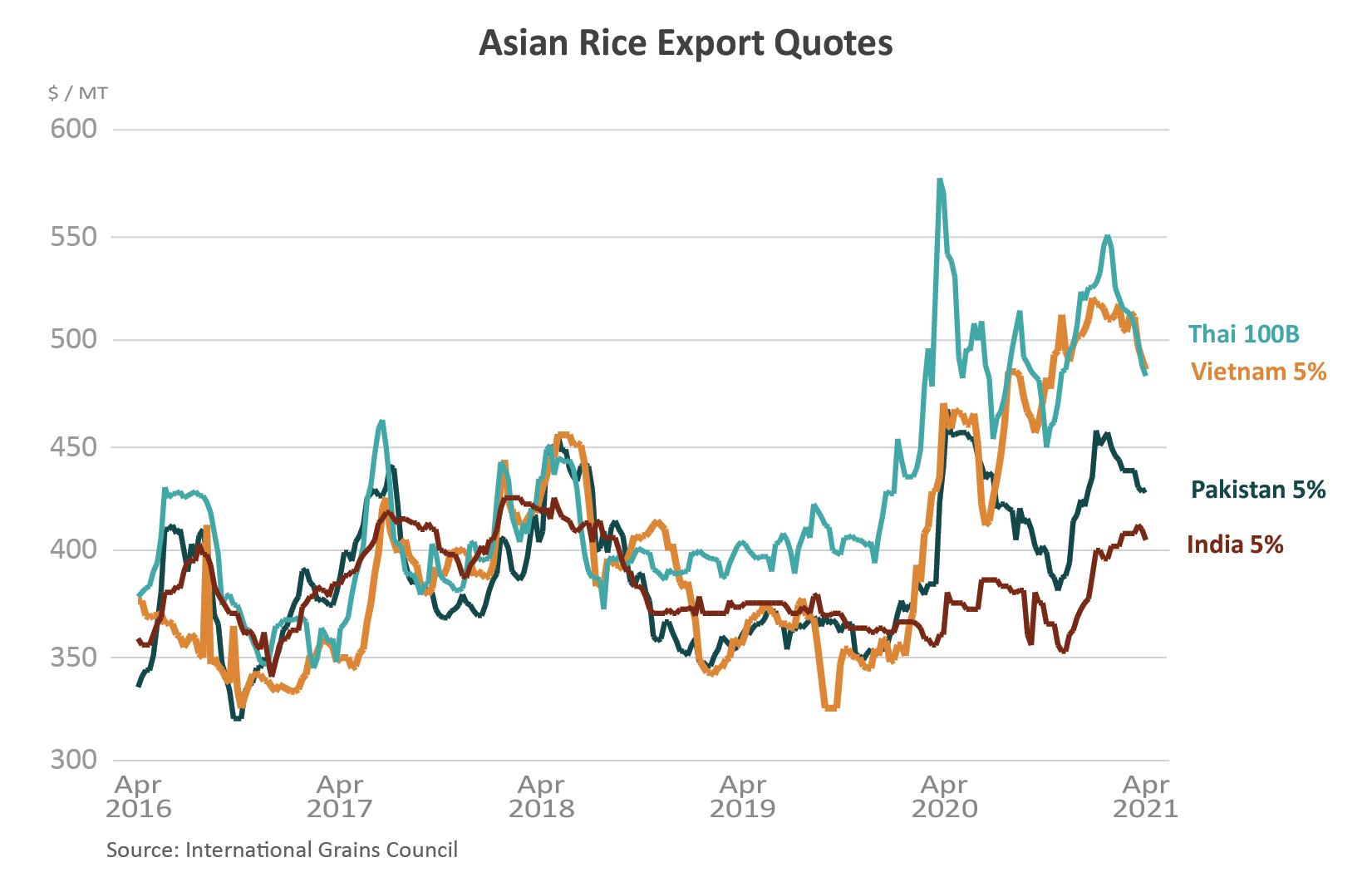 For much of the past year, Indian prices have been at more than a $100/ton discount to Southeast Asian exporters and consistently below Pakistan. The MSP encouraged the rice planted area to remain robust for both the fall and spring crops in 2020/21, while favorable weather, improved seeds, and better management practices have augmented yields. In addition to the bumper crops, the overall supply situation has been ample, with burdensome government-held reserves. Each of these factors has kept Indian prices competitive.

India’s rice exports not only expanded because of tighter competitor supplies but also from additional demand, which is reflected in the higher prices. In response to weather-related production issues, Bangladesh is currently buying large quantities through both government purchases and private sector buying, spurred by a reduced tariff. (For more information, see Bangladesh: Grain and Feed Annual.) India’s proximity and the flexibility in transportation, as well as the significantly lower prices compared with other major exporters, are causing most imports to be sourced from India. Thus far in 2021, Bangladesh has become the largest rice export destination for India. 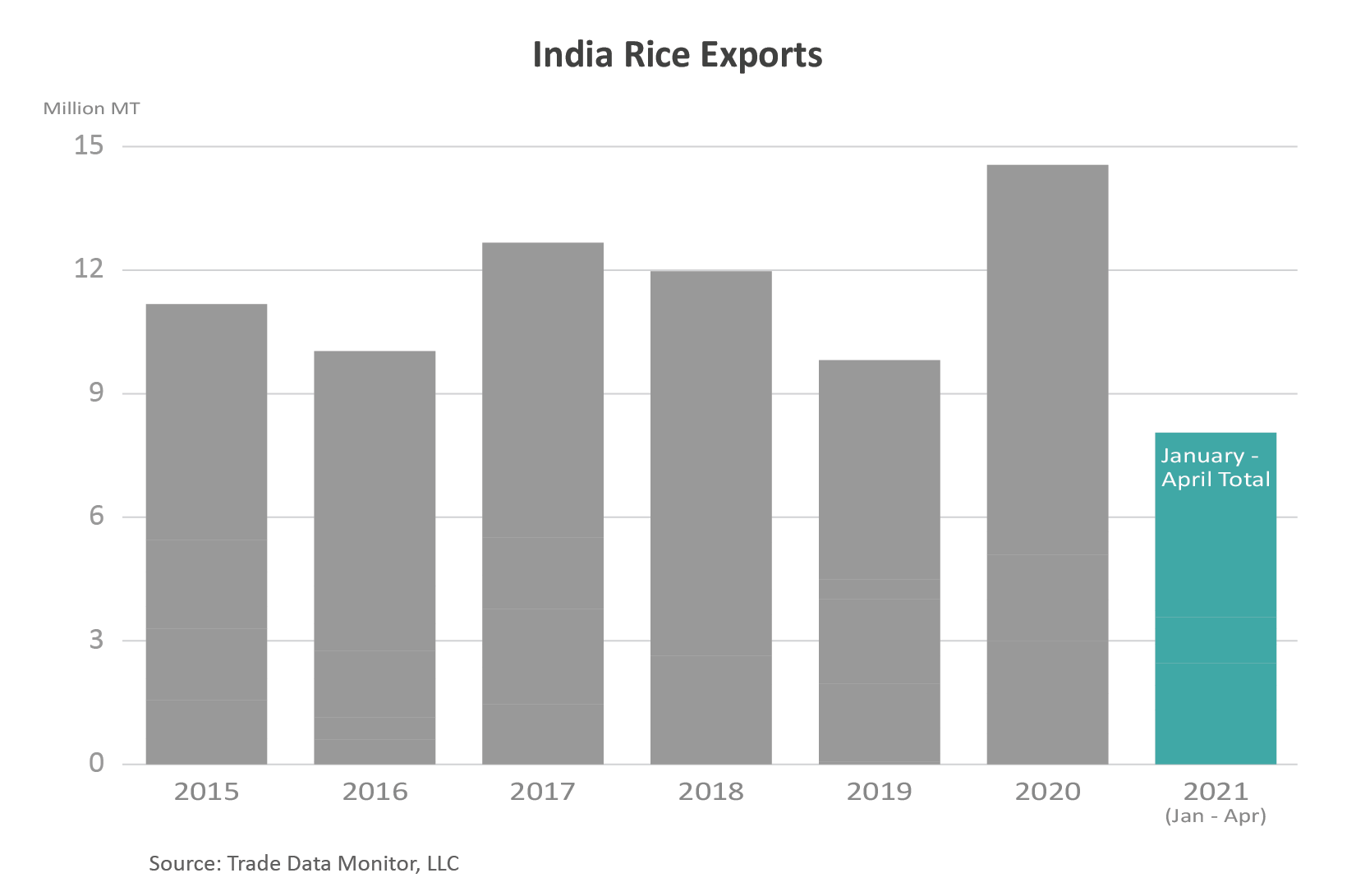 Another factor sustaining Indian exports is the opening of new deep-water port access in eastern India. This will enable India to regularly ship larger vessels, especially to West Africa, where trade has expanded considerably in recent years to countries such as Senegal and Benin. This advantage for shipping in larger vessels is particularly important since last calendar year when container trade became more of a challenge globally, especially for main competitors including Thailand, Vietnam, and Pakistan.

The combined impact of India’s bumper crop, tighter exportable supplies from competitors, and the suddenly larger demand from Bangladesh ensure that Indian exports continue to soar in 2020/21. While the exports are forecast lower in 2021/22 with an expected recovery in supplies for both Bangladesh and other rice exporters, India will remain the top exporter with historically large exports. 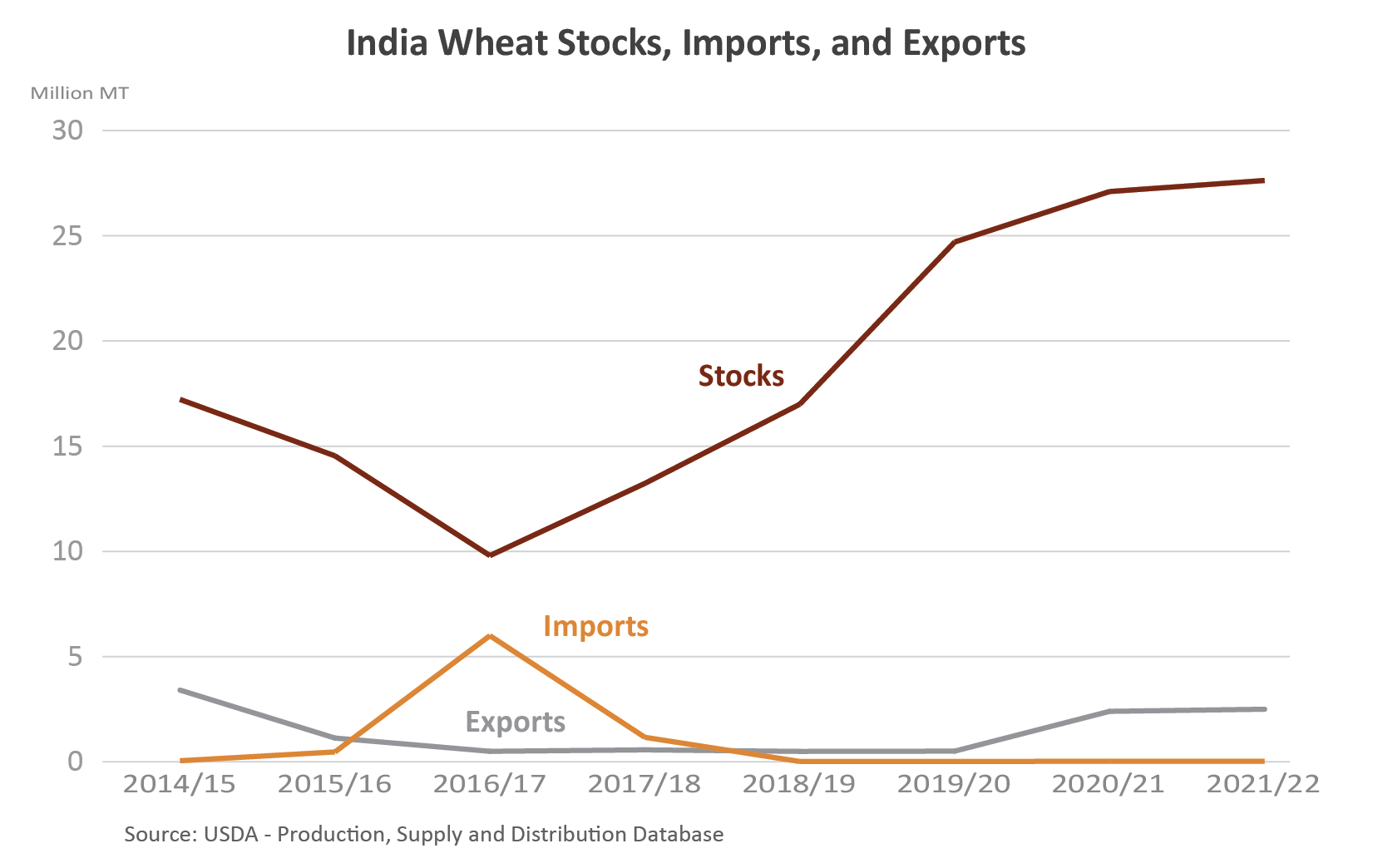 While India rice exports have steadily risen during the past several years, India wheat exports have expanded in 2020/21 after being a net importer only a few years ago. In 2020/21, record Indian supplies are finding an outlet in the global market as its prices finally become more competitive.

The Indian wheat MSP has steadily risen during the past decade. In 2020/21, higher wheat planted area led to production rising by 4 percent. Meanwhile, consumption also rose sharply by 8 percent with additional allocations to more than 800 million beneficiaries (some two-thirds of the national population of 1.33 billion) through India’s National Food Security Act (2013), COVID relief, and various other programs. The higher MSP and the strong government procurement have enabled government stocks to balloon. While the additional allocation through the public distribution system curtailed the amount of stock-building that otherwise would have taken place, stocks remain exceptionally large and more than triple the desired buffer stock levels.

Between 2015/16 and 2019/20, India exported only marginal amounts to neighboring countries due to high prices relative to other exporters. But as the chart demonstrates, its prices became more competitive during the past year. 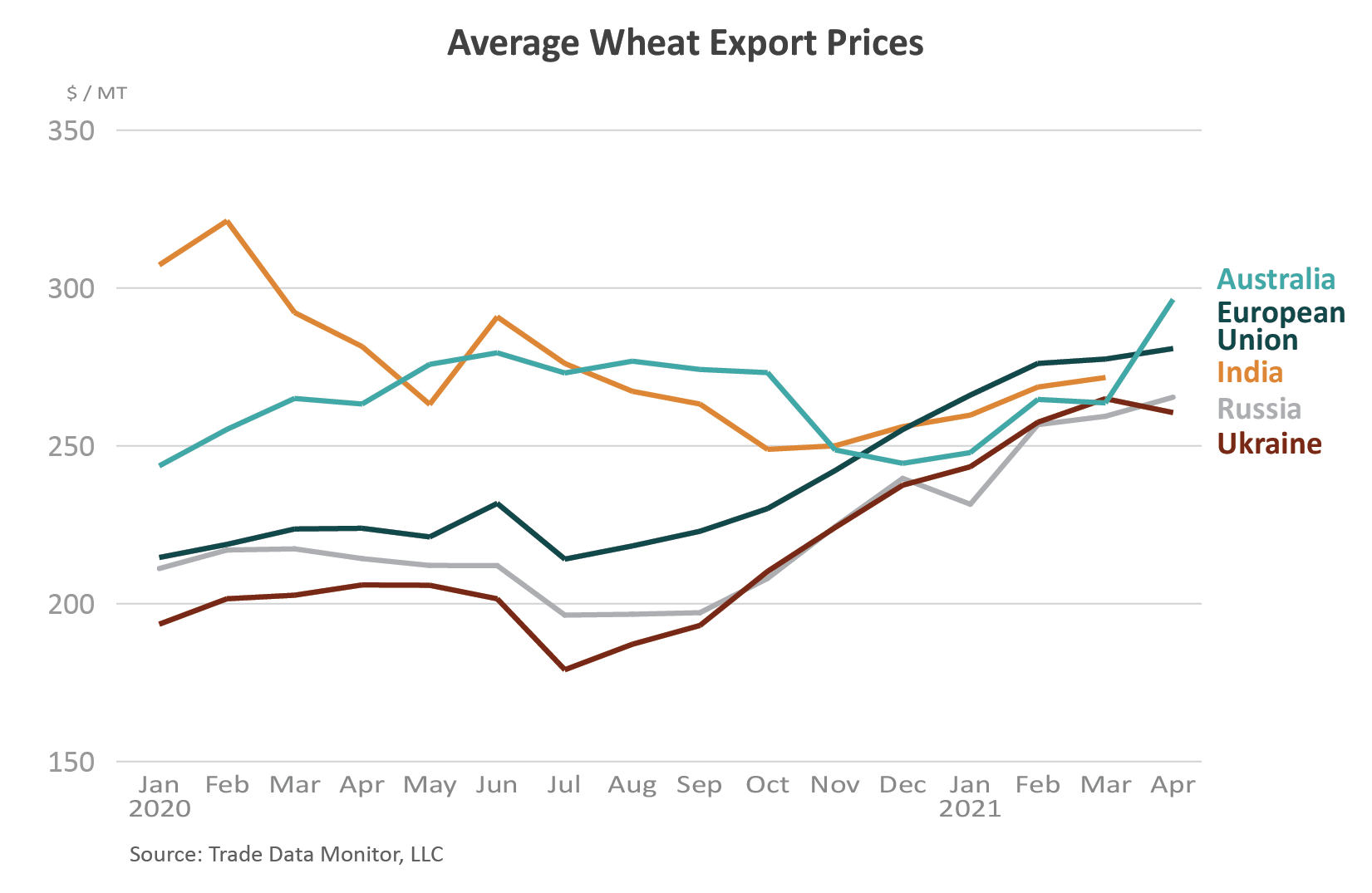 As in the case of rice, certain wheat exporters’ supplies became more limited during 2020/21, paving the way for larger Indian shipments. In December 2020, Australia, which typically supplies the Asian/Pacific market, began to harvest a record crop and resume large exports after 3 years of drought and lower exportable supplies. Meanwhile, production in the European Union was sharply lower in 2020/21, with exports tumbling by 30 percent as a result. Ukraine also suffered a smaller crop and is typically an exporter of feed-quality wheat, including to Asia. While Russia had a record crop, its exportable supplies have been limited by government policies of export quotas and taxes intended to direct more of the supplies to the domestic market in response to food price inflation. Whether amid smaller crops or government policies, key exporter supplies tightened during 2020/21, leading prices to elevate.

Simultaneously, sharply higher import demand from a couple of countries accelerated the price increases. The most significant growth in import demand in 2020/21 is from China, which is forecast to nearly double its imports and become the second-largest importer at 10.5 million tons. Pakistan, which drew down its stocks during the past couple of years of exporting, has subsequently become a major importer. Pakistan went from zero imports in 2019/20 to more than 3 million tons in 2020/21.

India has not shipped to either of these countries, but stronger global demand led to an overall escalation of major exporter prices, bringing those quotes higher and more in line with those of India. As a result, neighboring Bangladesh, Nepal, and Sri Lanka are increasingly supplied by India. Exports have expanded beyond the region to the Middle East, including the United Arab Emirates and Qatar. April through January exports already exceed 1.3 million tons. India’s 2020/21 wheat exports are forecast at 2.4 million tons, the largest in 6 years. 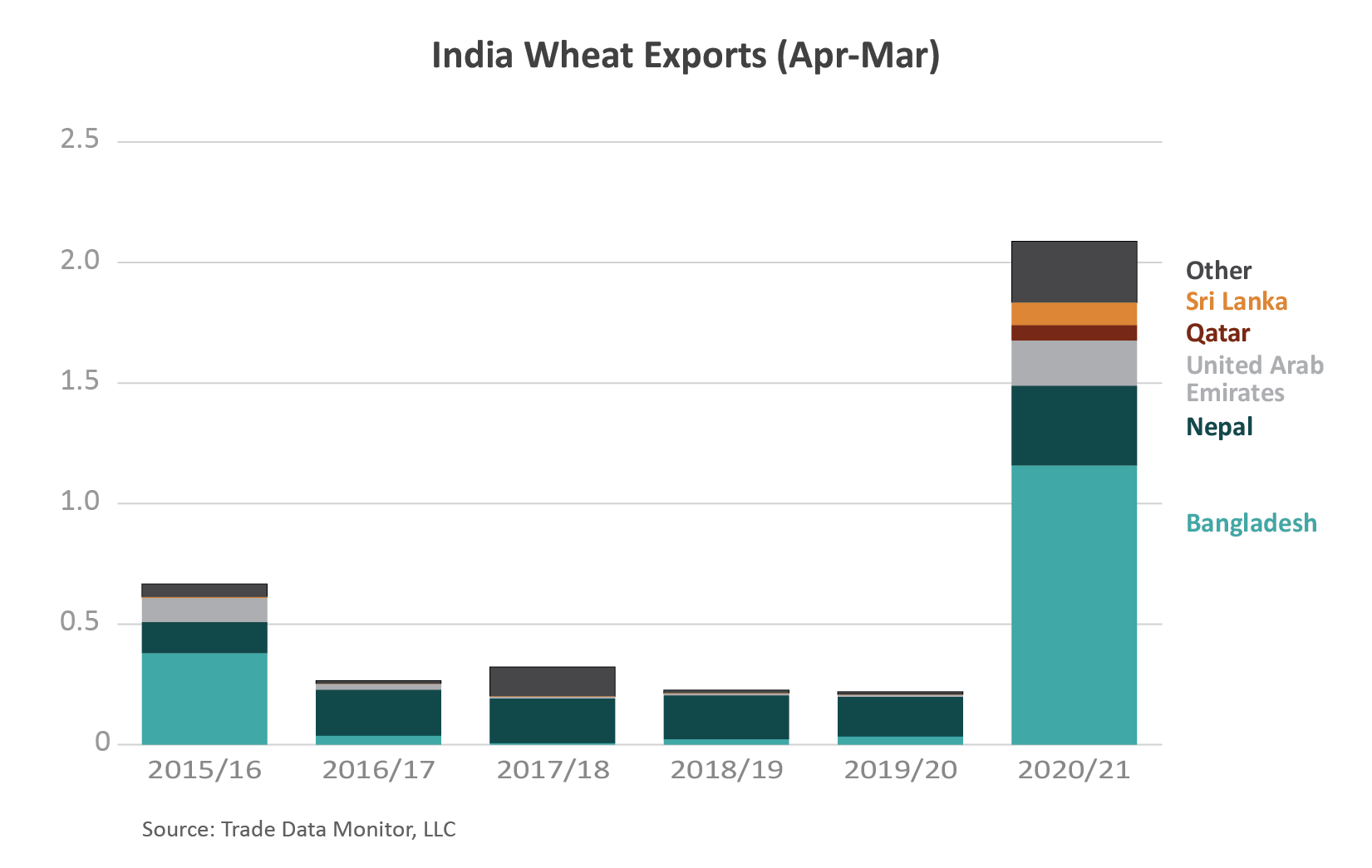 For 2021/22, India’s exports are still forecast to remain strong at 2.5 million tons, with continued demand from Bangladesh and Nepal.

In 2020/21, Indian exports for rice and wheat are all expected to rise to the highest level in several years with record rice exports. The confluence of factors supporting Indian exports include high MSPs, ample domestic supplies, tighter exportable supplies from competitors, and strong global demand, including from neighboring countries. Across both grains, 2020/21 was a bumper year and burdensome government stocks for wheat and rice were only partly offset by generous distributions through the public distribution system.

India has re-emerged as an exporter due to significant production and trade disruptions for other major exporters. As exporter grain prices escalated with strong global import demand, India’s previously uncompetitive prices became competitive in 2020/21. Indian rice has dominated exports globally, while exports for wheat and corn are currently confined to nearby markets, notably Bangladesh and to a lesser extent Nepal. India’s rice exports are currently sustained by Bangladesh’s short-term purchases but are nonetheless likely to remain high for the foreseeable future.

Blueberries Around the Globe – Past, Present, and Future

Trade and production of blueberries is expanding globally as product development boosts their profile in form and function.
International Agricultural Trade Report

Vietnam is an emerging economy in Southeast Asia that has experienced rapid growth and development during the last few decades. As has historically been the case in many countries, growth in animal-based protein consumption has gone hand-in-hand with this economic development.
International Agricultural Trade Report

Global lentil exports in 2020 jumped from $1 billion to $2.6 billion compared to the year before. Canada and Australia led the surge, accounting for more than three-fourths of the exports. Lentil exports peaked at $2.7 billion in 2015 but drifted lower through 2019, primarily due to reduced shipments from Canada to India and Turkey and from the United States to Canada and India.