As countries roll back COVID-19 restrictions, foreign market demand for beef is becoming a bright spot for U.S. producers. With record U.S. beef production forecast this year, U.S. beef exports are forecast to strengthen their position in the global marketplace. Meanwhile, lower production in Australia and tighter exportable supplies from Argentina are expected to limit the global availability of beef. For 2021, U.S. beef exports are forecast to reach a record 1.5 million metric tons (mt) carcass weight equivalent (cwe), up 16 percent compared to last year and 8 percent above the 2018 high. 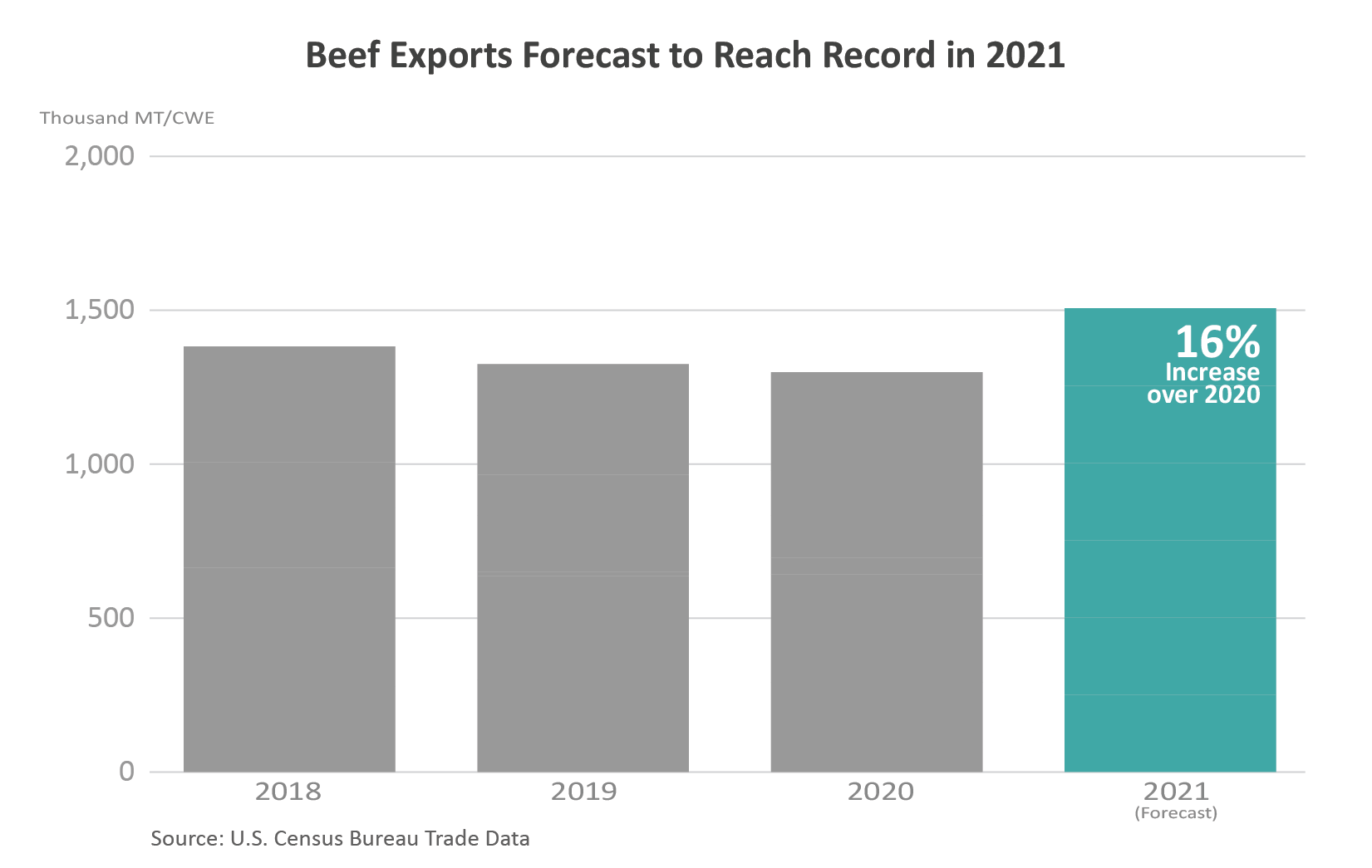 Since 2016, South Korea has been a top destination for U.S. beef. Exports were up 26 percent on a volume basis and 30 percent on a value basis from January to May 2021 compared to the same period a year ago. This market accounts for 25 percent on both a volume and value basis of the U.S. overseas beef market in the first 5 months of the year. As demand remains strong, South Korea is very likely to continue as a top U.S. destination in 2021, particularly as the won strengthens relative to the U.S. Dollar and the U.S.-South Korea Free Trade Agreement lowers duties on muscle cuts from 13 percent in 2021 to zero by 2026.

China overtook the United States as the largest beef importer by volume in the world in 2018 with imports totaling 1.4 million mt cwe ($4.8 billion) that year and 2.8 million mt cwe ($10.2 billion) in 2020. As demand remains firm, China is on pace to set another record in 2021 with imports in the first 5 months of 2021 at 1.3 million mt cwe ($4.6 billion). The potential for growth in U.S. beef exports is strong in future years as China import demand is expected to grow more than 30 percent during the next decade.

From January to May 2021, U.S. beef to China surged 13-fold in both exports and sales from the same period last year. U.S. beef has benefited from the Economic and Trade Agreement between the United States and the People’s Republic of China (also known as the Phase One Agreement), which expanded market access for U.S. beef by eliminating several long-standing non-tariff barriers. Through May 2021, China ranks as the third-largest U.S. market by both volume and value, surpassing both Mexico and Canada which have historically been ranked as top U.S. markets consistently. 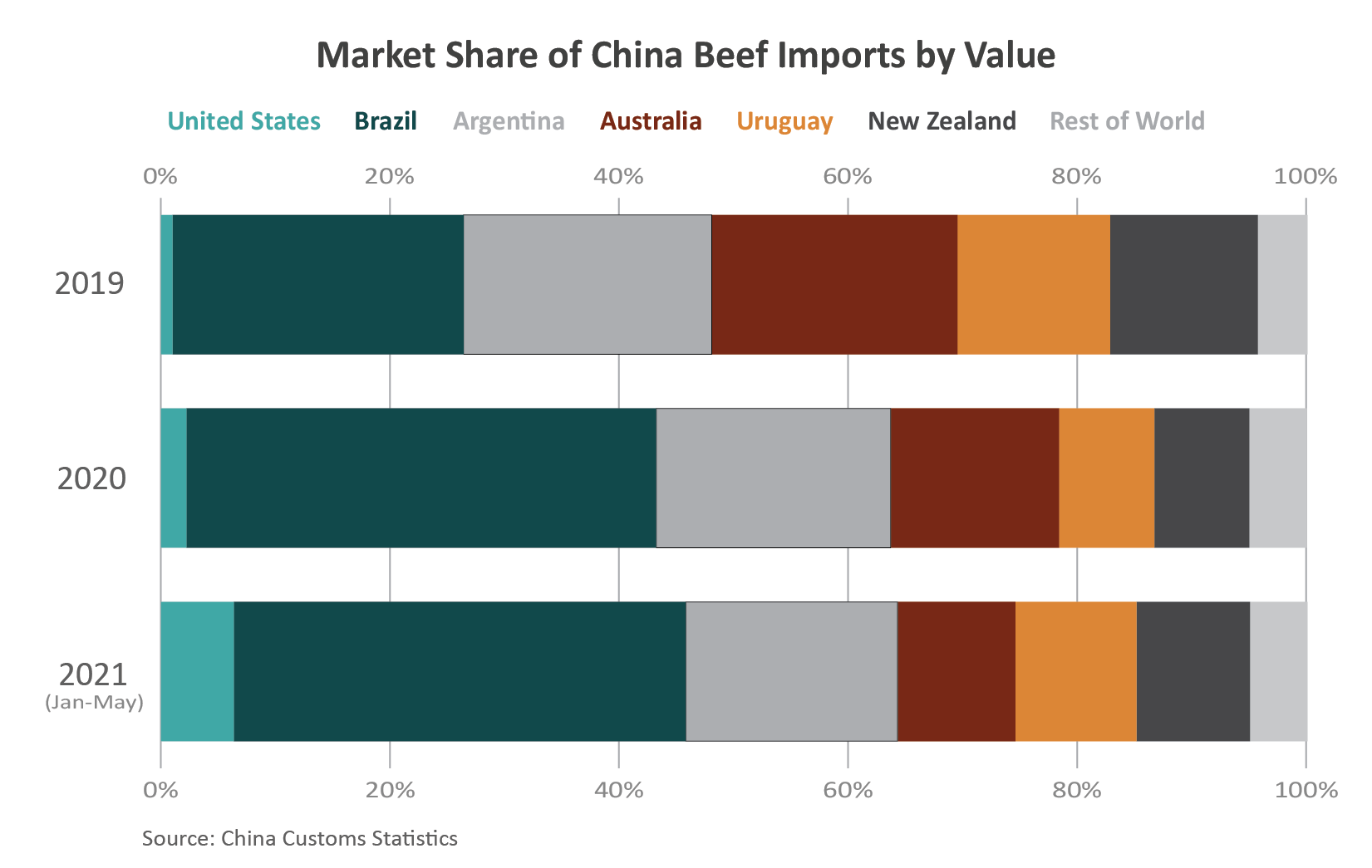 However, despite robust growth, U.S. beef accounts for a small share of China imports. In 2019, the year before the Phase One Agreement entered into force, U.S. beef accounted for about 1 percent of China imports on both a volume and value basis. Through May 2021, U.S. beef has risen to a near 4-percent share by volume and 7-percent by value. U.S. exports are well below their full potential due to remaining market access barriers, such as a ban on the feed additive ractopamine.

Reduced competition from Australia, the top U.S. competitor, is also a driver for strong U.S. exports. Australia beef production is forecast lower in 2021 due to herd rebuilding in the aftermath of a multi-year drought. China’s imports of Australian beef, which include a grain-fed volume that is in direct competition with U.S. beef, fell just more than 50 percent through May 2021. During the same period, the United States has increased its market share in the country.

Reduced exports from Argentina may also boost U.S. global market share, particularly in China. In mid-May, the Government of Argentina announced a restriction on beef exports for 30 days to ease rising domestic prices by bolstering domestic supplies. As of June 22, the Government amended the restriction to only include specific muscle cuts and carcass segments until December 31, 2021. Further, beef exporters will be limited to exporting 50 percent of their average 2020 monthly export volume through at least August 31, 2021. As Argentina is the fourth-largest exporter in the world and second-largest exporter to China, the restriction is expected to buoy global shipments from other suppliers.

Despite strong demand in South Korea, explosive growth in China, and reduced supplies from competitors, projections for 2022 are not as bright. U.S. production is forecast down 2 percent, the first drop in at least 7 years, and exports are slightly lower. But as overseas markets continue to recover from the pandemic, pent-up demand just may support exports in a number of markets.

Economic conditions in Bangladesh have created significant opportunities for U.S. agricultural exports, particularly consumer-oriented commodities including tree nuts, condiments and sauces, fruit juice and non-alcoholic beverages, snacks, and baking ingredients. Bangladesh has maintained one of the fastest growing economies in the world for the past decade. The increasing population and rising percentage of middle- and high-income households create a growing potential market for U.S. agricultural products.
International Agricultural Trade Report