In 2020, the value of U.S. pork & pork product exports to the world reached a record $7.7 billion, up 11 percent from the prior year. The top three markets, accounting for 66 percent of exports, were China at $2.3 billion, Japan at $1.6 billion, and Mexico at $1.2 billion. China overtook Japan as the top market for U.S. pork as African swine fever (ASF) continued to limit China’s domestic pork supplies and buoy demand for imports. However, exports to Japan also rebounded with implementation of lower tariffs under the U.S.-Japan Trade Agreement and major U.S. competitors increasingly focused on the Chinese market. Meanwhile, U.S. exports to Mexico struggled in 2020 as a depreciating peso and weak economy stifled import demand. 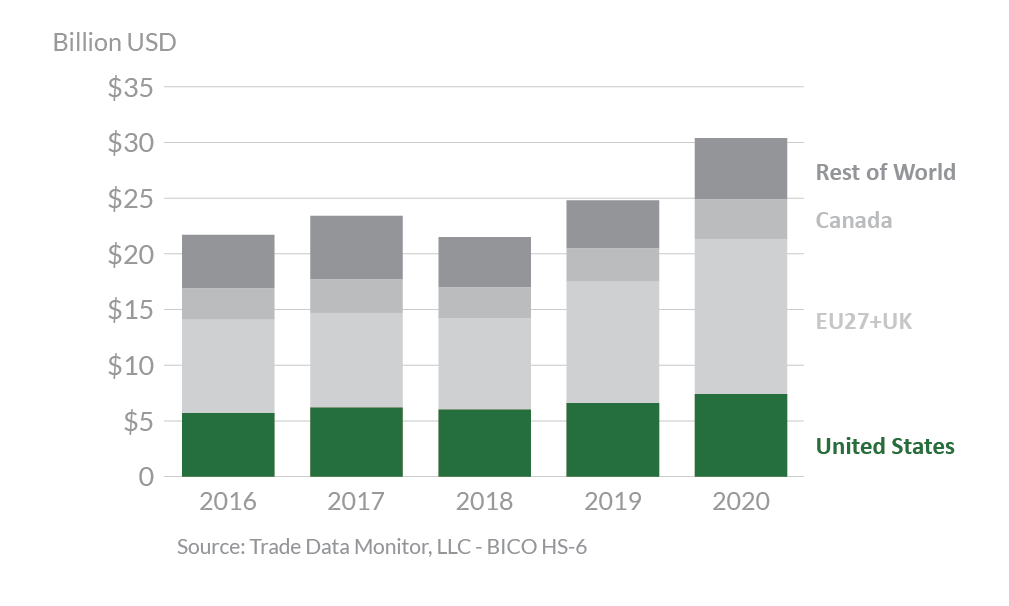 While Chinese pork prices remain high and import demand will continue to be considerably higher than the pre-ASF era, China imports are expected to contract year-over-year as their hog sector recovers. Increased competition in the Chinese market will cause U.S. pork export volumes to ease from the 2020 record. Lower exports to China will be partially offset as improving economic conditions promote growth in traditional markets such as Mexico and South Korea. Additionally, the Philippines and Vietnam are poised for robust import demand as these countries continue to rebound from ASF.

In addition to impacting global import demand, ASF has the potential to reshuffle global trade flows as major exporters cope with the disease. Towards the end of 2020, the discovery of ASF in Germany in feral swine effectively restricted German pork exports to key Asian markets. Ultimately, the ability to shift supply chains on the continent, with other member states picking up the slack, prevented total EU27+UK exports from severe impacts.