HomeNewsroomWitnessing the Benefits of Free Trade Agreements for U.S. Agriculture

Witnessing the Benefits of Free Trade Agreements for U.S. Agriculture

By Jonathan Cordone, Deputy Under Secretary for Farm and Foreign Agricultural Services

Within a two-month span in the spring of 2012, the United States entered into two free trade agreements (FTAs) of great importance to American agriculture – one with South Korea and the other with Colombia. Four years later, in June 2016, I traveled to both countries and saw first-hand the benefits of these agreements for American producers.

In Korea, I spent time with representatives from the cooperator organizations that partner with USDA to promote U.S. food and farm products. The country has long been an important market for us, but a number of sectors are seeing unprecedented success thanks to the U.S.-Korea FTA, known as KORUS.

The cooperators enthusiastically shared their stories, pointing out that not only are U.S. products now more favorably priced, thanks to tariff reductions, but that KORUS has also developed better brand recognition for American goods among Korean consumers.

I heard how sales of U.S. food, from cheese to cherries, have dramatically risen because of KORUS. Cheese exports are up 20 percent, with Korea now ranking as our second-largest export market. And thanks to the elimination of Korea’s 24-percent duty on U.S. cherries, the country now leads all other markets in per-capita sales. Our exports of almonds and Florida grapefruits to Korea have grown 60 percent, and cranberry exports have experienced a 12-fold increase. There are additional opportunities on the horizon for U.S. products such as pork, for which tariffs will be fully eliminated in 2016.

There are similar successes happening in Colombia. The 2012 U.S.-Colombia FTA has helped catapult the country from our 21st-largest export market to our ninth-largest. In Bogotá, I visited an outlet of PriceSmart, the largest operator of membership warehouse clubs in Central America and the Caribbean. PriceSmart just recently expanded into the Colombian market and has quickly become one of country’s major retailers of U.S. food products. It imports a host of U.S.-made goods, including cheese, sausage, apples, wine, frozen seafood, olive oil and sundried tomatoes. That would not have happened without the FTA.

I witnessed two other benefits for U.S. agriculture in both countries.

I’ll call the first “the American Brand Effect.” It was clear that, as foreign consumers become more familiar with American fruits, vegetables, dairy, meat and other foods, they increasingly associate “American” with quality, safety and nutrition. The success of early imports, combined with lower prices from reduced tariffs, has made food from the United States more desirable. When consumers in those countries want to purchase safe, affordable, nutritious food, they now simply look for the American flag on a product. That’s why retailers like Costco in Korea and PriceSmart in Colombia have become so successful: They primarily sell affordable, quality American foods.

I’ll call the second “the Goodwill Effect.” Let’s be honest, the fact that we have FTAs with these countries does not mean that selling into their markets is always easy. Because of our trade agreements, however, we are able to engage directly with our counterparts in a more meaningful way to resolve trade problems when they arise. For example, while in Korea I was able to meet with government officials at the ministries of Agriculture and Health to discuss reopening their market to U.S. poultry. Although I’d love to take credit for Korea’s subsequent decision to allow U.S. poultry back into the country, I know that my engagement was a small part of years of work by many, including our Foreign Agricultural Service team based in Seoul. None of that would have happened as quickly or effectively as it did without our FTA relationship.

The bottom line is that free trade agreements benefit U.S. agriculture. That’s why this Administration remains fully committed to enacting additional agreements, such as the Trans-Pacific Partnership, that will further eliminate tariffs and break down trade barriers for American producers. We must also continue to hold our FTA partners accountable for their commitments, not just on reducing tariffs, but also on labor and environmental standards that can lead to unfair competition, and nontariff barriers that can block American goods from having fair access into their markets. Agreements are only as good as our ability and willingness to enforce them, and America’s farmers, ranchers and food companies deserve nothing less. 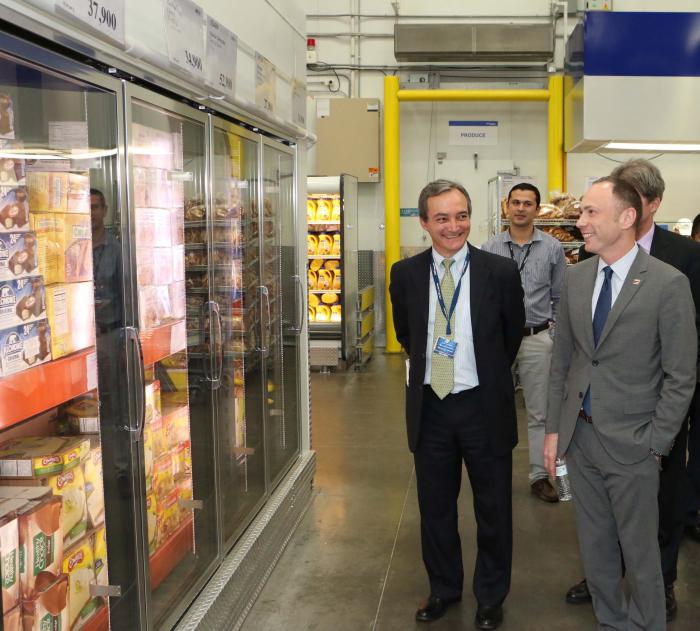 Above: Deputy Under Secretary Jonathan Cordone (right) sees the variety of U.S. food products that are available at PriceSmart warehouse stores retail in Colombia thanks to the United States' free trade agreement with that country. With him is Luis Fernando Gallo, PriceSmart's country manager for Colombia.

Below: At a Homeplus market in Seoul, Cordone (second from right) sees a display of U.S. tree nuts, which have benefited from tariff reductions under the KORUS free trade agreement. With him are (left to right): Yeon-Shin Park, assistant manager of the Homeplus Tree Nut Team; Murielle Kim, representative of the Almond Board of California; and Jong-Pyo Jung, Homeplus vice president of operations 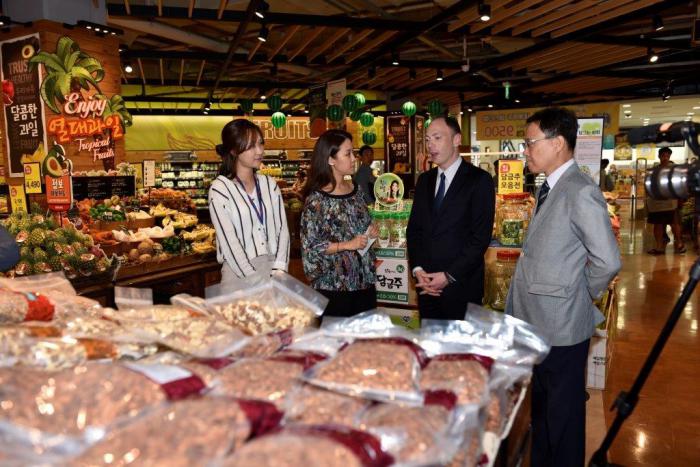