Trade: An Economic Engine for Agriculture and Rural America 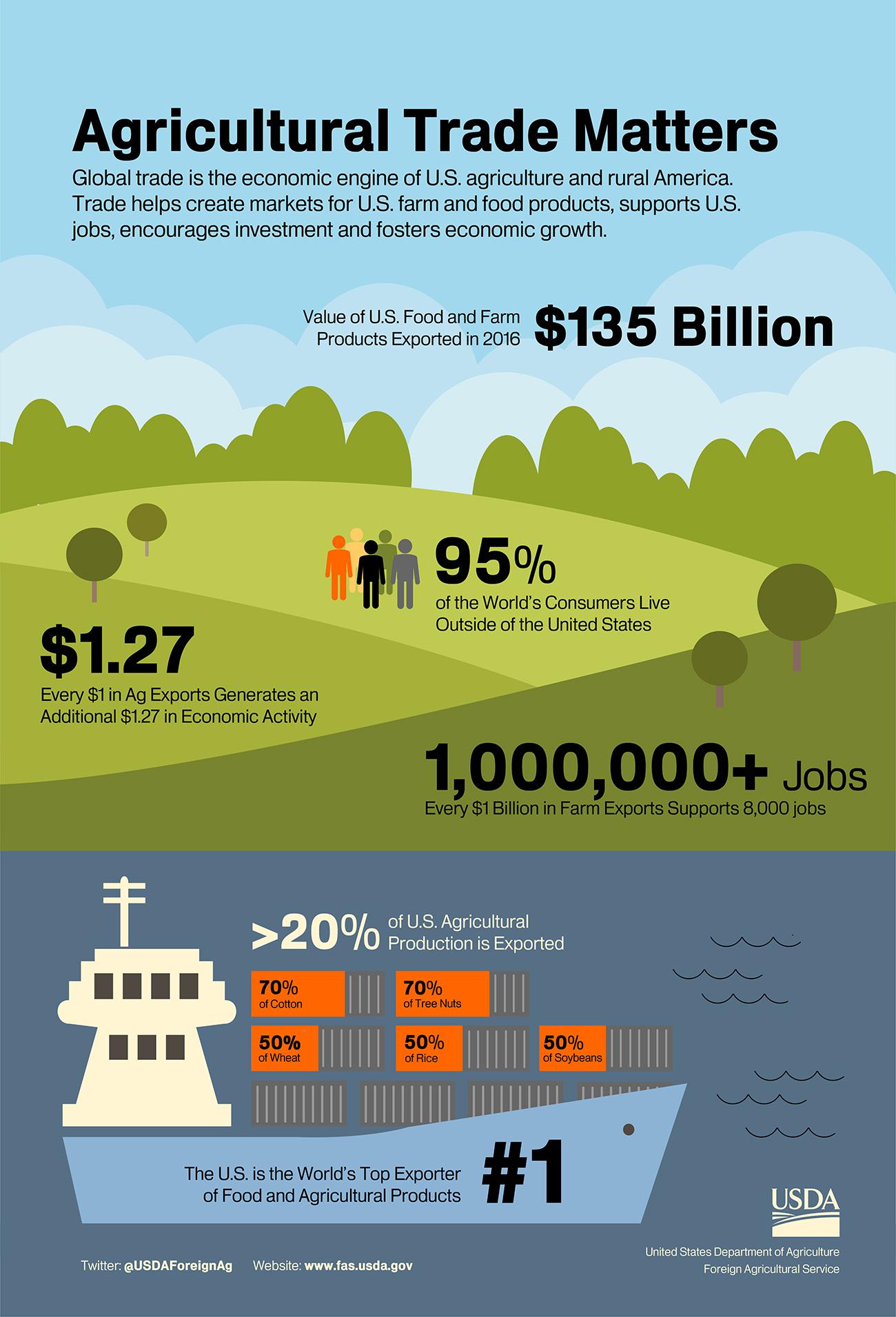 May is World Trade Month, a time set aside to acknowledge and reflect on the importance of global trade. But here at USDA, you could say that every month is “Trade Month” because few industries depend more upon – and benefit more from – trade than American agriculture.

When American farmers are financially healthy, they not only support themselves and their families, but also their employees, local equipment dealers, farm service suppliers and the rural communities where they live and do business. In 2015, U.S. farms produced more than $425 billion in gross output and purchased more than $225 billion in inputs. That has a big impact on rural America and also the national economy. In 2015, 21 million full- and part-time jobs, or 11 percent of total U.S. employment, were related to the agricultural and food sectors.

Our farmers’ incomes are driven largely by the market prices they receive for the crops and livestock they sell. To support those prices and keep the farm sector viable, we need to expand demand for U.S. grown farm and food products – and that means expanding exports. With 95 percent of the world’s consumers living outside the United States, global demand is on the rise and foreign sales are a key to the long-term health of our farm sector. Without export markets, U.S. agriculture would have larger domestic supplies, lower prices and reduced production, resulting in diminished rural economic activity.

U.S. agricultural exports totaled $135 billion in 2016. Those exports supported one million American jobs. Not only that, but every dollar exported generates an additional $1.27 in economic activity right here at home. Roughly 20 percent of U.S. agricultural production is exported – and for certain products that percentage is much higher. For example, 70 percent of U.S. tree nuts and cotton are sold abroad, as is about half of U.S.-grown wheat, rice and soybeans, and almost 20 percent of U.S. meat and dairy production.

It’s clear that American producers depend on exports. Their ability to export, in turn, depends on good trade agreements. Those agreements, when done right, help open new markets for our products, slash tariffs, remove market distortions and break down the significant barriers our U.S. agricultural exporters face overseas. A business-friendly environment encourages investment, rewards innovation and fosters economic growth. This means more money in the pockets of the world’s consumers, who are then in a position to spend more on food and agricultural products.

Simply put, America’s agricultural producers and ranchers wouldn’t be where they are today without global markets, but the benefits of agricultural trade reach far beyond our farms, ranches and rural communities. That’s a point worth remembering not just during World Trade Month, but every month.

Bringing Together U.S. Agriculture and Its #1 Customer

USDA Under Secretary for Trade and Foreign Agricultural Affairs Ted McKinney led a successful trade mission to Toronto and Montréal in September to show appreciation for the United States’ closest trading partner and to highlight the benefits of the...