May is World Trade Month, a time to recognize and echo the importance of global trade, particularly fair trade. As we kickoff World Trade Month here at USDA, it’s important to acknowledge that trade is on our minds not only during May but every single day of the year. Our work supporting fair trade is a 24-hour job as few industries depend more upon – and benefit more from – trade than American agriculture.

It’s not an understatement to say that the gains from trade are powerful.  When people produce what they are best at, and trade it for things they are less adept at producing, both sides benefit.  Historically, economic integration in the post WWII era delivered immense benefits.  Trade is not the only reason, but it is a major factor in helping the number of people living in extreme poverty fall to record lows and become dwarfed by the number of people not living in extreme poverty. 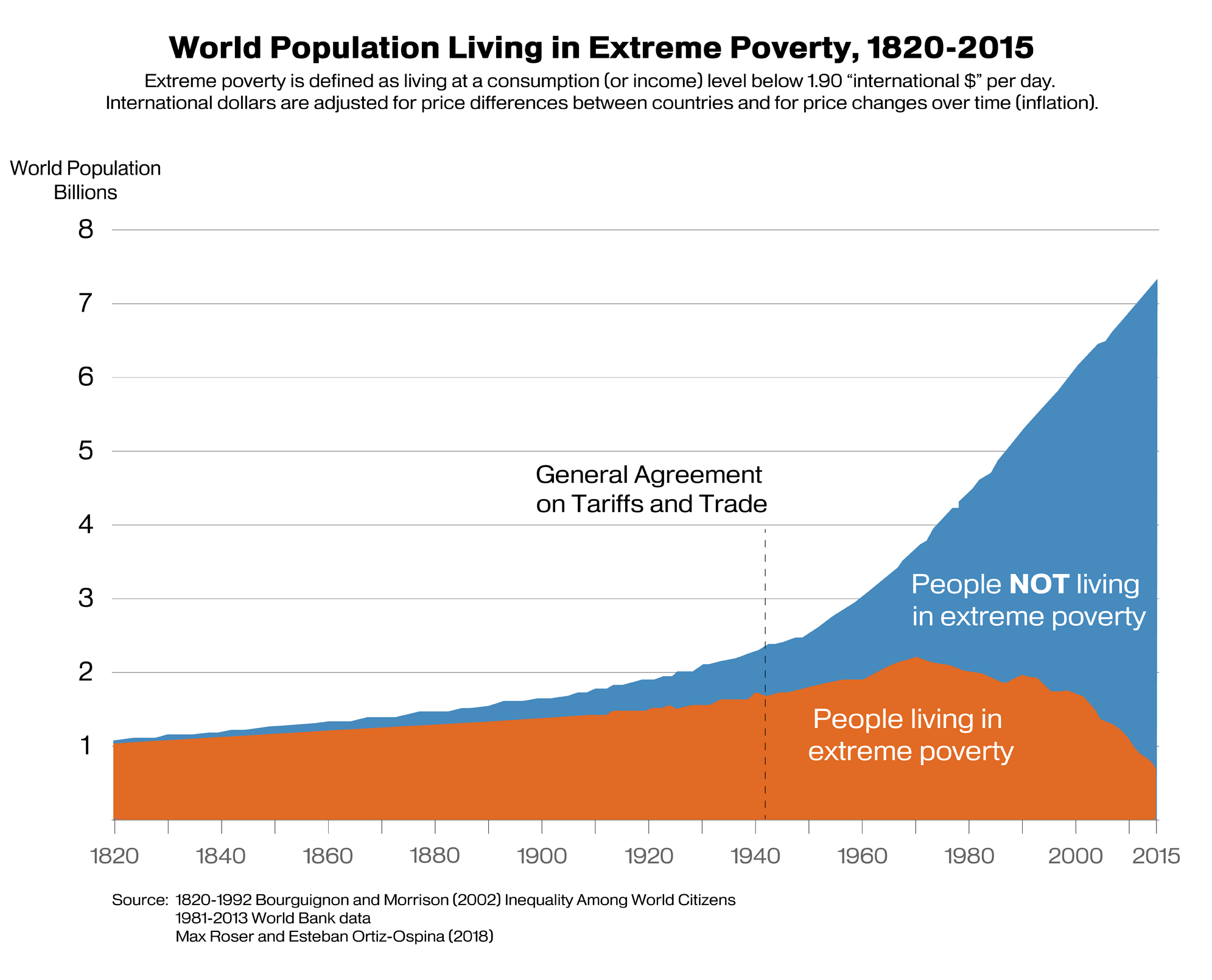 For U.S. agriculture, this success story is also a profitable one.  Our farmers are the best in the world and we produce way more than we can consume.  For many commodities a significant share of U.S. production is exported.  Without customers overseas, we would have huge surpluses, which would drive down prices, and result in hardships for our farmers that would ripple throughout the rural economy. 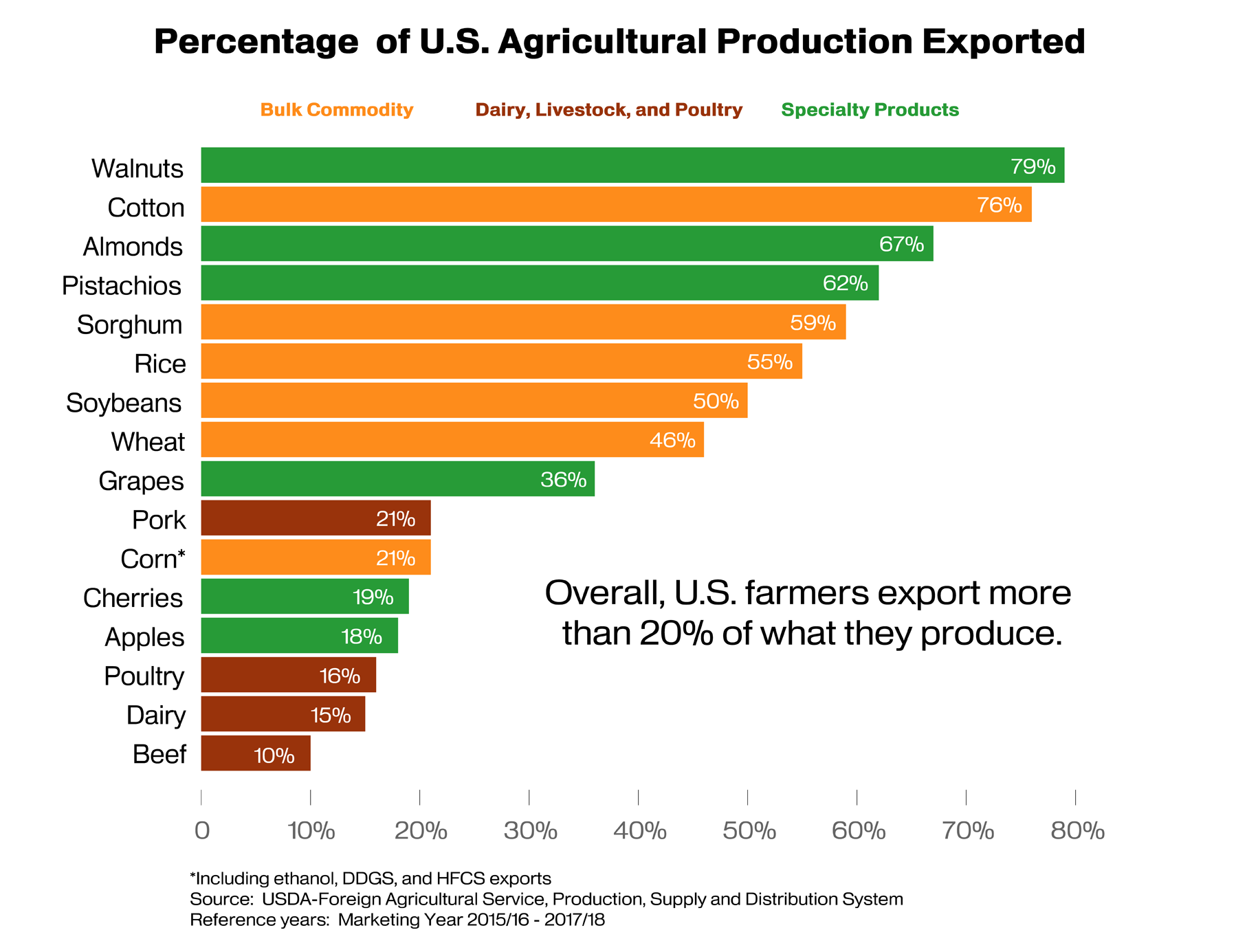 For me, these data raise two questions.  First, since trade is good, what can we do to encourage more of it?  Second, while trade is clearly good, how can we ensure it is fair?  More specifically, while society as a whole benefits from access to foreign customers and the availability of imported goods, what can we do to protect particular industries from losing out to unfairly traded goods from foreign competitors?  After working on trade policy for over 25 years, my view is that the answer to both of these questions is the same – a strong set of rules operated through a multilateral institution.

Importance of the WTO

Fortunately, we have a strong set of rules paired with an effective institution to both lay down rules for trade and enforce them – the World Trade Organization (WTO).  WTO rules have been agreed to by 164 countries, including all the important trading nations, and have helped reduce barriers to trade that have powered the impressive growth in trade and expansion of world income.  The core rules of the WTO are straight-forward and intuitively fair.

You may wonder how did these rules come about? Following the great depression and WWII, leaders in the United States recognized the importance of guarding against trade restrictions and wanted to expand trade to rebuild the world’s economies and foster closer diplomatic relations.  Working initially with a small group of like-minded countries, a set of trade rules were agreed to in 1947, called the General Agreement on Tariffs and Trade (GATT).  These rules were so successful that over time more countries joined the agreement, committing to follow the rules for trade among members of the GATT and also finding ways to negotiate reductions in trade barriers, principally tariffs.  Building on this success, in 1994 the GATT was converted to the WTO, with further rules agreed to and, importantly, a binding dispute settlement system established.

The GATT, and now the WTO, have both helped expand trade and have established a set of rules that define ‘fair trade.’  So, what are those rules?

When I was a guppy government worker my former colleague Kevin Brosch once summarized the core rules for fair trade to me:  three-and-a-half rules of the GATT.  They are both strong rules to guard against trade restrictions and are also manifestly fair.  They promote fair trade by limiting government restrictions and legitimizing the trading system.  Here in a nutshell are the key rules:

1. Don’t discriminate across suppliers.  The first article of the GATT ensures ‘Most Favored Nation’ treatment for all members.  Basically that means that an importing country can’t treat one supplier less favorably than the treatment it provides its most favored supplier.  For example, if the United States imposes a 5 percent tariff on mango imports from the Philippines, and that is the lowest tariff it applies on mangoes, India is ensured that it will not be subject to a tariff higher than 5 percent.  Or, if the United States requires imported peaches from Argentina to be allowed in without fumigation, we can’t require imported peaches from Chile to be fumigated prior to entry.  This ensures fair treatment across supplying countries.

2. Tariffs are the only justifiable tool for protecting domestic markets.  The second article of the GATT says non-tariff measures like quotas, bans, and variable import restrictions are prohibited.  Countries can however use tariffs, but they are set at maximum levels (for example the U.S. tariff on beef cannot exceed 26.4 percent).  By establishing tariffs as the basis for regulating trade, the rules ensure more transparency and predictability and also facilitate negotiations between countries to bring down trade restrictions.  It is really as simple as a negotiation over numbers!

3. Don’t discriminate against imports.  The third article of the GATT protects imported products from facing requirements or taxes that are less favorable than those imposed on domestic products.  For example, if the United States imposes a 15 percent excise tax on U.S. whisky, it can’t impose an excise tax higher than 15 percent on imported products. Or, if the United States says U.S. beef can be sold in grocery stores, convenience stores, and wholesale markets, imported Korean beef cannot be restricted to just be sold through convenience stores.  This ensures imports are not restricted arbitrarily from the market.  A key exception is tariffs (imports can be taxed while domestic products are not), which is covered next.

3.5 Subsidies.  The WTO rules on subsidies are weaker, so I call it a half rule.  Subsidies are permitted, with some exceptions.  For example, export subsidies (which are government payments that help exporters win sales in international markets) are banned. While some subsidies are permitted, if an importing country shows that the subsidies are leading to increased imports from the subsidizing country, and injuring the importing country’s domestic industry, it can ‘remedy’ the situation by imposing restrictions –counter-vailing duties.  Similarly, if a country is selling its product at a less than fair value, an importing country can restrict imports through anti-dumping duties.  This rule recognizes that subsidies are pervasive instruments of government policy, but aims to control the negative impacts.  This is easier said than done. China’s unjustified use of these trade remedies to unjustifiably restrict U.S. sorghum exports this year shows how these rules can be twisted for protectionist purposes.

Exceptions to the Rules and Enforcement

Is that it?  Not quite.  The WTO rules run for hundreds of pages and these three-and-half rules account for less than 1 percent of all the rules.  The rest of the rules are exceptions to these rules.  For example, countries agree to not discriminate across suppliers, however, if there is a threat to health or safety from imports, the trade rules allow the importing country to discriminate against imports from the impacted country. For example, if an exporting country is suffering from a disease outbreak that could spread to an importing country, a country may ban imports of the dangerous product from the exporting country, even as it imports from another supplier and continues to allow domestic commerce of the same product.  The rules do lay out provisions to ensure this ‘health and safety’ exception is not abused:  before imposing a trade restriction the importing country must complete a scientific risk assessment and it can’t arbitrarily impose overly restrictive measures.  This can be pretty complicated!

Similarly, there are exceptions that allow countries to discriminate across supplies by forming Regional Trade Agreements.  This allows the United States to eliminate tariffs on Mexican and Canadian imports, while maintaining them on other countries, like the European Union.  There are conditions that a Regional Trade Agreement must substantially cover all trade to guard against arbitrary commercial preferences aimed at disadvantaging other countries. This rule has allowed countries to enter Free Trade Agreements which have helped boost global trade and expand incomes.

There are tons of these exceptions:  goods made from prison labor can be banned, countries can impose technical standards, in times of a currency crisis countries can restrict imports to protect foreign currency reserves, and many more. My main point is these are good rules.  If we were going to start from scratch today and try to identify a set of trade rules, I believe we could not do better than the ones agreed to through the GATT and WTO process.  The proof is in the pudding – despite shortcomings, global trade has boomed under this system, and these rules have protected against abuse of the trading system by protectionist interests.

One last comment regarding fair trade, rules are only as good as their enforcement provisions.  The WTO agreement of 1994 set up a dispute settlement system to give the rules real teeth.  If a country believes a trading partner is violating the rules, it can request a panel of experts to here the merits of the case and render a judgement.  If the policy is found to be inconsistent with trade rules, the offending country needs to resolve the violation.  If it does not, the injured country can impose trade sanctions to retaliate.

The WTO dispute process has been very successful for U.S. agriculture.  The threat of litigation keeps countries honest for the most part and has helped us negotiate reforms in other countries when they have caved to the temptation to cheat.  The United States has initiated numerous WTO cases and in all instances we have either successfully negotiated a settlement or have prevailed in litigation.  This has led to policy reforms by our trading partners, and kept markets open for our products.  Even when countries have found it politically impossible to reform, such as the infamous EU hormone ban, we have been able to send a strong signal to other trading partners to not imitate bad behavior, and even in the EU we have negotiated compensatory import access.  Other countries have also challenged some of our policies, but much less frequently than we have used the litigation option, and they have not challenged core U.S. farm or trade policies.  We currently have two important disputes on China’s grain policies working their way through the WTO now – a positive outcome should give us leverage to encourage market-oriented reforms in China.

The WTO rules have served U.S. agriculture well.  There are important areas were improvement is needed:  too many high tariffs restrict trade, too many countries use very distorting price supports and input subsidies, and rules need to be strengthened with respect to unjustified non-tariff measures.  Additionally, some countries have been circumventing WTO obligations for protectionist purposes, undermining the trading system.  What U.S. agriculture, and the world, needs is a stronger and more useful global trading system.

In honor of National Hot Sauce Day, USDA-FAS is celebrating a category of U.S. food exports that come in small packages but pack a lot of flavors and often heat – condiments and sauces. In 2021, the export of U.S.-made condiments and sauces was valued at $2 billion.
Feature

Walnuts Will Knock Your Stockings Off This Holiday Season

Nothing says winter holiday season quite like walnuts. These incredible tree nuts have been part of winter celebrations for several millennia, their mild and creamy flavor and a soft texture making them a great choice for both sweet and savory holiday dishes. USDA Foreign Agricultural Service helps make sure that people all over the world can enjoy fresh walnuts during the holidays.
Feature

USDA Wraps Up the Final Ag Trade Mission of 2022

Staying true to its mission of expanding U.S. agricultural and food exports, the U.S. Department of Agriculture’s Foreign Agricultural Service started the final month of 2022 with a bang. The Spain Agricultural Trade Mission was the largest and most...