Mexico was the third-largest destination for U.S. agricultural products in 2020 at $18.1 billion in total value. This represents a 6-percent decline from 2019. Even with a decrease in exports in 2020, the United States maintained its No. 1 position in Mexico’s agricultural imports by a wide margin with close to 70 percent market share. On July 1, 2020, the United States–Mexico–Canada Agreement (USMCA) was entered into force. Exports of soybean meal and soybeans grew $22 million and $17 million last year, respectively. The largest decrease in 2020 was a 23-percent reduction ($254 million) in beef product exports. Other losses were in pork at 10 percent, poultry at 9 percent, and dairy at 8 percent. Despite these decreases, Mexico remained the top market for corn, dairy products, poultry meat, distillers’ grains, sugar & sweeteners, and animal fats in 2020. 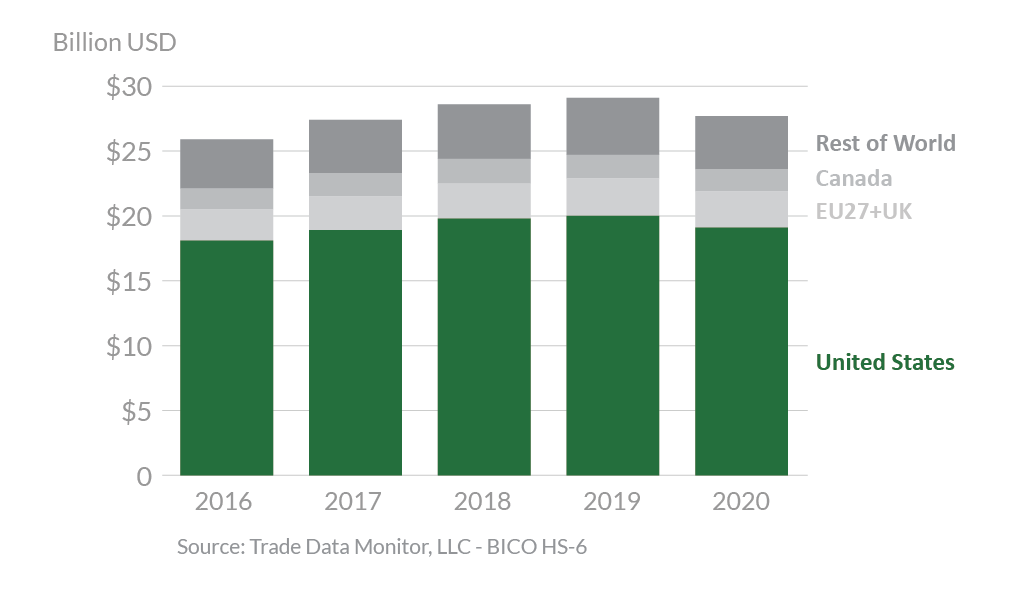 The outlook for U.S. agricultural exports to Mexico in 2021 remains muted amidst a continuing economic crisis. Once Mexico’s economy recovers, U.S. exports of consumer-oriented, bulk, and intermediate agricultural products are anticipated to recover. Implementation of the USMCA ensures tariffs between the two countries remain at zero.

USMCA contains new and enforceable rules to ensure that sanitary and phytosanitary measures (SPS) are science-based and developed and implemented in a transparent and non-discriminatory manner.

The Distilled Spirits, Wine, Beer, and Other Alcohol Beverages Annex of the USMCA Agriculture Chapter contains non-discrimination and transparency commitments regarding sale and distribution of alcoholic beverages. Also, the Parties agreed to labeling and certification provisions to help prevent technical barriers to trade in wine and distilled spirits.

In a side letter, Mexico confirms that market access of U.S. products in Mexico is not restricted due to the mere use of the individual cheese terms listed in the letter.

USDA will continue working to expand market access for U.S. potatoes, with an anticipated final ruling on a case brought by the Mexican potato industry. A positive ruling could provide U.S. fresh potatoes with access to all of Mexico. Currently, Mexico prohibits the shipment of U.S. fresh potatoes beyond a 26-kilometer zone along the U.S.-Mexico border.

USDA will continue advocating for science-based policies on biotechnology product approvals and pesticides. On December 31, 2020, Mexico published a final decree under which existing authorizations “for the use of genetically modified corn grain in the diet of Mexican women and men” will be revoked and new authorizations are prohibited until genetically modified corn grain is completely replaced by January 31, 2024. The same decree calls for the phase-out of the use of glyphosate and glyphosate-containing products by January 31, 2024. USDA will continue to work to prevent any trade disruptions from the decree.