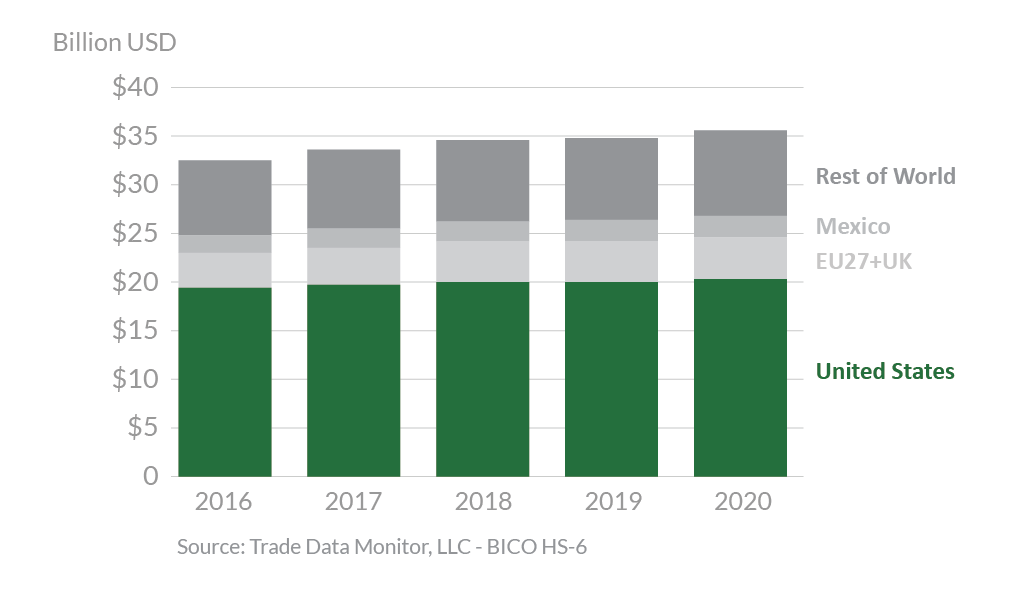 On July 1, 2020, USMCA entered into force, strengthening the long-standing North American free trade relationship. USMCA maintains the zero tariffs between the three countries that were in place under NAFTA, as well as provides new market access for a wide range of U.S. dairy products through tariff-rate quotas (TRQs). The Agreement also requires Canada to eliminate its milk classes 6 and 7, which allowed unfairly low-priced Canadian dairy products to undersell U.S. products in Canada and in third country markets.

Canada’s global chicken and chicken product imports before USMCA entered into force were constrained by (i) Canada’s WTO TRQ or by (ii) a regulation that calculated as a percentage of Canadian chicken production in the preceding calendar year, whichever was larger. USMCA provides a country-specific TRQ for poultry for the United States, preserving a portion of the market for U.S. exporters, even as the Canadian market evolves and becomes more competitive and open to other partners. The United States still has access to Canada’s WTO TRQ.

The USMCA contains new and enforceable rules to ensure that sanitary and phytosanitary measures (SPS) are science-based and developed and implemented in a transparent and non-discriminatory manner. The USMCA obligates Canada to eliminate discrimination in grading of U.S. wheat and the requirement for a country-of-origin statement on quality grade certificates for U.S. wheat.

The Distilled Spirits, Wine, Beer, and Other Alcohol Beverages Annex of the USMCA Agriculture Chapter contains non-discrimination and transparency commitments regarding sale and distribution of alcoholic beverages. Also, the Parties agreed to labeling and certification provisions to help prevent technical barriers to trade in wine and distilled spirits.

In a USMCA side letter with the United States, Canada committed to ensure that British Columbia eliminate measures governing grocery store wine sales that discriminate against U.S. wine, no later than November 1, 2019.

Canada has implemented free trade agreements with other agricultural exporting blocs: the 11-nation Comprehensive and Progressive Agreement for Trans-Pacific Partnership (CPTPP) and the Comprehensive Economic and Trade Agreement (CETA) with the European Union. Canada is in the process of implementing a Canada-United Kingdom Trade Continuity Agreement following the United Kingdom’s exit from the European Union. Though Canada is a mature market with modest economic growth and low population growth, there remains significant export growth potential in Quebec, a regional economy the size of the Philippines, where U.S. products are underrepresented.