In 2019, the value of U.S. beef and beef product exports to the world shrank by 3 percent from the prior year record to $8.1 billion, the second highest level ever. The top three markets, accounting for 61 percent of sales, were Japan, South Korea, and Mexico, at $2 billion, $1.8 billion, and $1.1 billion, respectively. Lower year-over-year exports were driven by a decline in shipments to Japan, Hong Kong and Canada. With the Comprehensive and Progressive Agreement for Trans-Pacific Partnership (CPTPP) going into effect in late-2018, the United States began facing a competitive disadvantage in Japan, its top export market, and lost market share to Canada, New Zealand, and Mexico. Furthermore, tariff and non-tariff barriers in the Chinese market prevented the United States from capitalizing on increased Chinese demand. Despite a year-over-year increase in shipments to China, U.S. market share in China is less than 1 percent. Overall, exports accounted for 11 percent of U.S. domestic production. The United States was the world’s largest beef producer, second-largest importer, and fourth-largest exporter by volume in 2019. 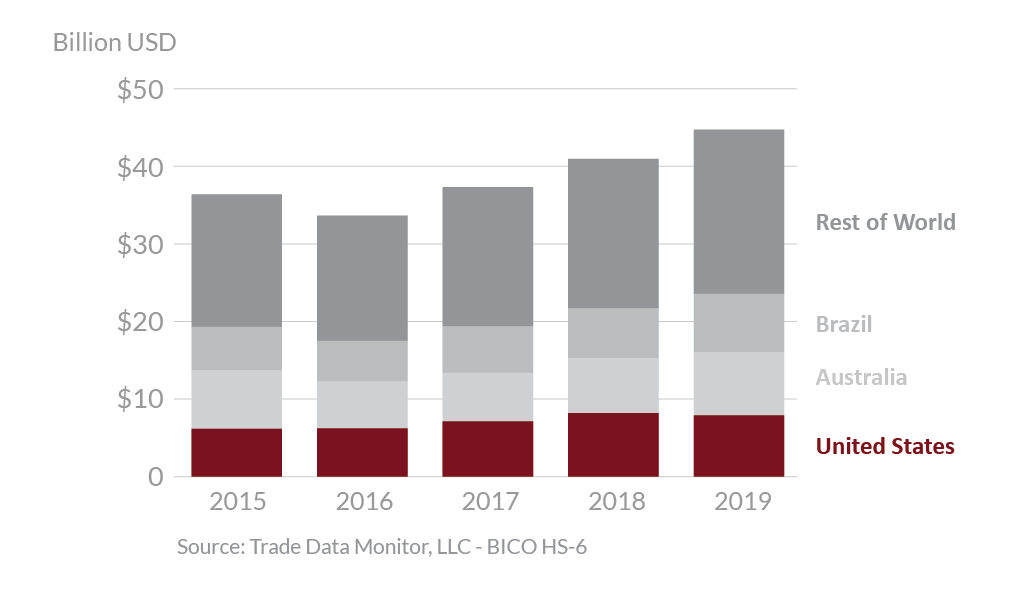 Prior to the COVID-19 outbreaks, beef exports were forecast to rise significantly by volume in 2020 as improved market access for U.S. beef and strong global demand spur trade. Australia, one of the top U.S. competitors in Asia, will begin rebuilding a herd that is at its lowest level in 2 decades. This will lead to lower exportable supplies and likely benefit the United States. Additionally, improved market access due to the Japan and China agreements will support U.S. exports to two important markets. The U.S.-China Phase One Agreement has the potential to improve access for U.S. beef by addressing some non-tariff barriers and lowering existing tariffs. The continuing global protein deficit caused by ASF will support demand for U.S. beef. With the projected growth in exports, the U.S. share of global beef exports is forecast to increase slightly. Beginning January 1, 2020, a portion of the European Union’s High-Quality Beef (HQB) quota will be reserved for U.S. product. The portion of the HQB quota reserved for U.S. beef will steadily increase over the next 7 years. The United States is projected to be the world’s largest beef producer, second-largest beef importer, and third-largest beef exporter, overtaking Australia but behind Brazil and India.