Exports of high-value, processed food products* have been a significant contributor to the strongest five-year period for agricultural exports in U.S. history. Processed food exports climbed to more than $45 billion in 2013, up from $29 billion in 2009. Over the past five years, exports in the 20 processed food categories monitored by FAS grew by 61 percent. 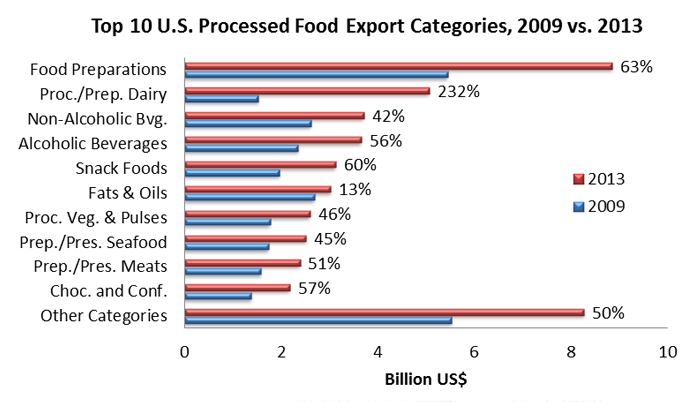 While the processed food category includes a diverse array of prepared and packaged products, all of them benefit from a common trend: rapid growth in global demand. Euromonitor, a market research firm, estimates that the retail value of packaged food (a proxy category for high-value food products) will increase by $316 billion over the next five years to $2.6 trillion. One challenge for U.S. exporters is to translate this expansion in food retail into export opportunities. Another challenge is steep competition from other principal suppliers.

The European Union (EU) is the world’s leading processed food exporter, with roughly twice the exports of the United States. EU exports of processed food products reached $91 billion in 2012, growing 28 percent over five years. Like those from the United States, EU processed food shipments are highly diversified geographically and categorically. U.S. market share has decreased marginally in the past decade because of top-tier competition, not only from the European Union but from other emerging suppliers like Thailand and China. During this time, U.S. exporters have still managed to tap global demand and expand exports by 143 percent. 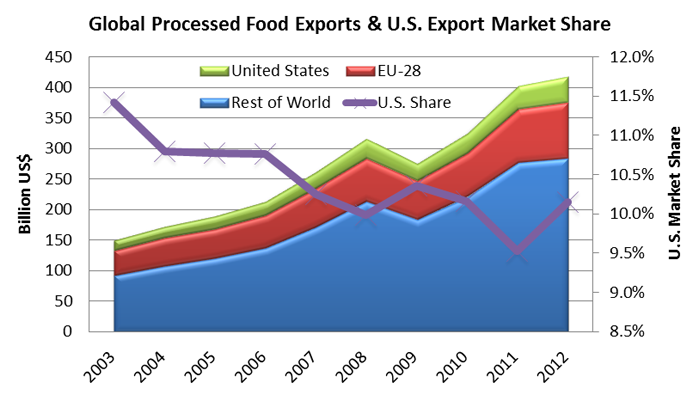 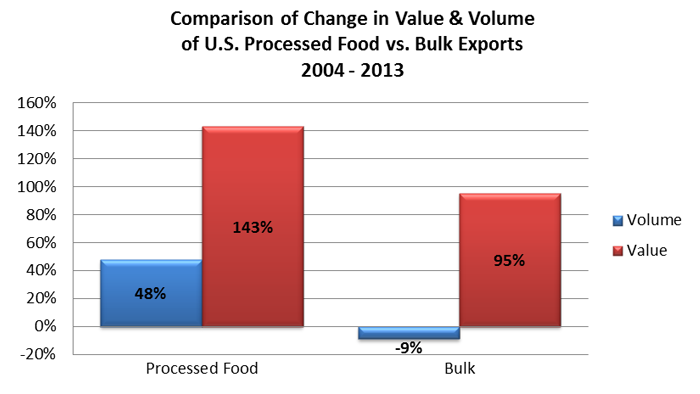 The confluence of two megatrends, middle class income growth and urbanization, is driving increased sales of processed food. According to the OECD, the size of the global middle class is projected to increase from 1.8 billion people (2010 estimate) to 3.2 billion by 2020. Of this projected growth, 85 percent is expected to come from Asia. Based on analysis of IHS Global Insight data, middle class households in developing countries (households with real incomes greater than $20,000 per year) are projected to increase 54 percent by 2020 compared to eight percent in developed countries.

Many of these new consumers will be living in emerging megacities where convenience, higher protein content, and functional ingredients take center-stage in dietary preferences. Between 2003 and 2012, the urban population in the top 10 markets for U.S. processed food exports grew by 249 million people. Over the past decade, China’s urbanized population has grown from 40 percent of the country’s total population to 52 percent. During this period, China’s urban population grew by 186 million, equal to more than half the total population of the United States. Japan’s urban population was similarly robust, rising from 83 percent to 92 percent over 10 years, to a total of 11 million people. Future demand for high-value processed food items will continue to be propelled by the increasingly urbanized middle class.

It’s no coincidence that middle-class income growth and urbanization are most prevalent in the fastest-growing import markets for U.S. processed food. Modernization of distribution channels and improved market access are additional factors supporting the import surge in East Asia. U.S. processed food exports to East Asia (excluding Japan) grew 104 percent between 2009 vs. 2013, compared to 47 percent for Canada and Mexico, where most of the current trade is concentrated. Bilateral trade with the European Union is another bright spot for international trade in processed foods. The Transatlantic Trade and Investment Partnership negotiations could lead to greater market access for businesses on both sides of the Atlantic. 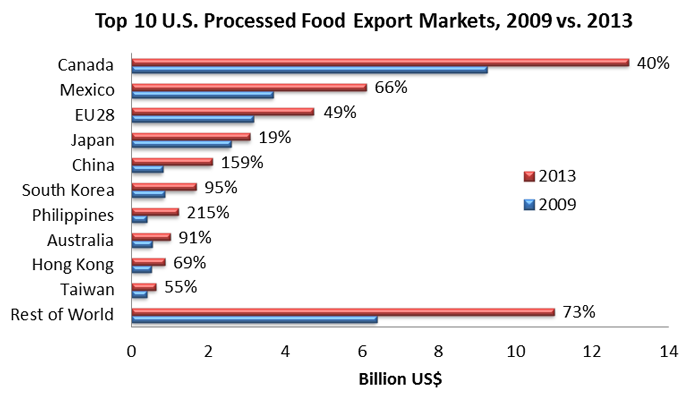 Food and beverage E-commerce is another trend shaping the future of food retail. Euromonitor estimates that the online grocery segment was worth $42 billion globally in 2013. A joint study of six key markets by PayPal and Nielsen estimates that by 2018, there will be 130 million cross-border shoppers spending more than $300 billion, compared to 94 million spending $105 billion today. This presents a tremendous opportunity for U.S. food and beverage exporters to meet the demand of the Internet-savvy, time-pressed urban consumer.

Food “e-tailers”, another term for the business-to-consumer (B2C) platforms for online grocery retail, have witnessed explosive sales growth in emerging market megacities such as Shanghai, China. To advance the viability of this growth channel, a model partnership was established between FAS’ Agricultural Trade Office (ATO) in Shanghai and Tmall, China’s largest B2C E-commerce platform.

Together, along with various U.S. cooperator organizations, ATO Shanghai and Tmall have launched several product promotions that featured processed and consumer-oriented items such as cookies, dried fruits and nuts, pork, seafood, and candy. To demonstrate the potential scale of these promotion events, last summer’s promotion of cherries from the Northwestern U.S. led to sales of 168 metric tons of U.S. cherries to 84,000 individual shoppers in just over two weeks. According to Tmall, this is the equivalent of nine years’ worth of cherry sales at a medium-sized supermarket.

Websites such as Tmall provide a useful platform for American exporters of all sizes and in all sectors to market their products directly to China’s growing number of online consumers. However, the online revolution in food and beverage e-commerce is not a one-country phenomenon. Globally, more than 150 million new Internet users came online in 2013. Other e-grocery platforms in Tokyo, Sao Paulo, Moscow, and London show extraordinary potential for this booming cross-border retail channel.

Resources for Processed Food Exporters
FAS has a wide range of resources available to U.S. processed food exporters at www.fas.usda.gov.