U.S. exports of fish and seafood reached a record level in fiscal year 2014, with a total value of $5.3 billion, up four percent from FY 2013. With a six-percent share of global trade, the United States is the sixth-largest supplier of fish and seafood products to the world market, behind China, Norway, Thailand, India, and the European Union. In FY 2014, U.S. fish and seafood exports were almost equal in value to U.S. exports of poultry ($5.5 billion) and were greater in value than exports of fresh fruit ($5 billion) and cotton ($4.6 billion). Over the past five years, U.S. exports have risen 43 percent in value, primarily due to higher volumes (up 38 percent), rather than rising prices. In fact, price growth for fish and seafood exports has lagged behind price growth in other protein products. In the past five years, the average unit price of exported fish rose only four percent, compared to 61 percent for beef, 28 percent for pork, and 22 percent for poultry. 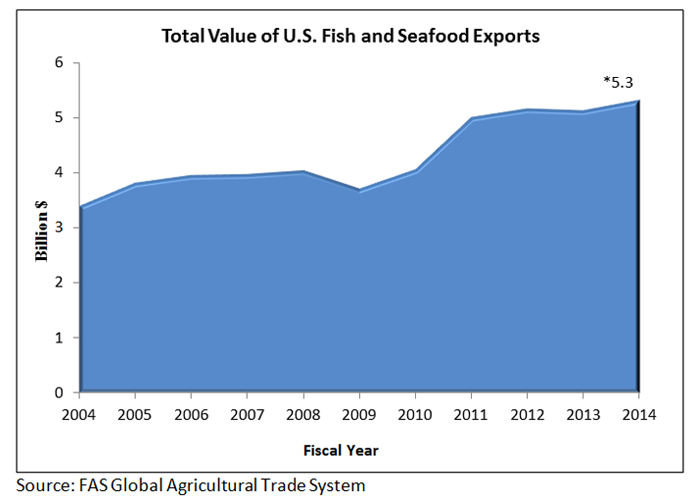 U.S. exports of fish and seafood products in FY 2014 were led by lobsters, Alaskan pollock, salmon, surimi, and fish roe, which together accounted for more than 40 percent of the total value of exports. Key product groups include:

Fish (Fresh/Frozen): Fresh and frozen fish (including filets) accounted for 61 percent of U.S. fish and seafood exports, up two percent from the previous year and up 39 percent from five years ago. Pacific salmon and Alaska pollock were the top fish exports, showing much stronger growth in recent years than cod, the third-largest category of fish exported. In FY 2014, 26 percent of fresh and frozen fish exports went to China and 26 percent went to the EU.

Shellfish:  Shellfish accounted for 31 percent of U.S. fish and seafood exports in FY 2014. U.S. shellfish exports have grown rapidly in recent years, primarily due to higher exports of lobster and, to a lesser extent, crab. Lobster sales are driving export growth from the East Coast of the United States, and exports from this region has been largely responsible for the overall growth in fish and seafood exports in recent years (see chart below). U.S. shellfish exports were up eight percent in FY 2014, and have grown 65 percent in the past five years. In FY 2014, 20 percent of U.S. shellfish exports went to China and 19 percent went to the EU. 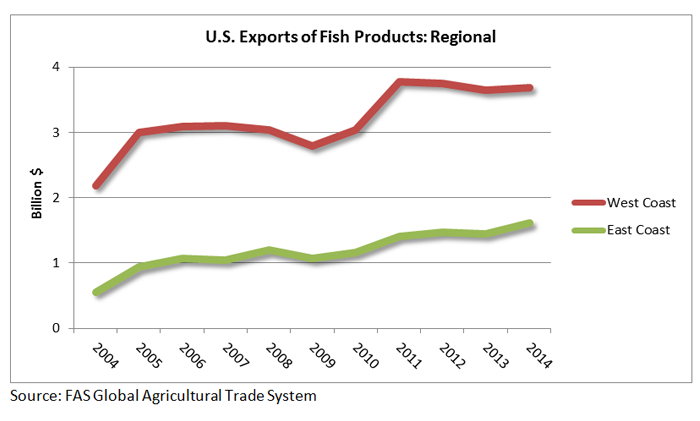 Other Fish Products: Other fish products (primarily roe) account for eight percent of total U.S. fish and seafood exports in FY 2104, down three percent from the previous year, but up 16 percent over the past five years. The lion’s share (51 percent in FY 2014) of U.S. roe exports go to Japan. While Russia had previously been the second-largest market for U.S. salmon roe, shipments there are currently restricted as a result of the recent Russian ban on certain U.S. agricultural and food exports.

Growth Driven by Surge in Exports to China 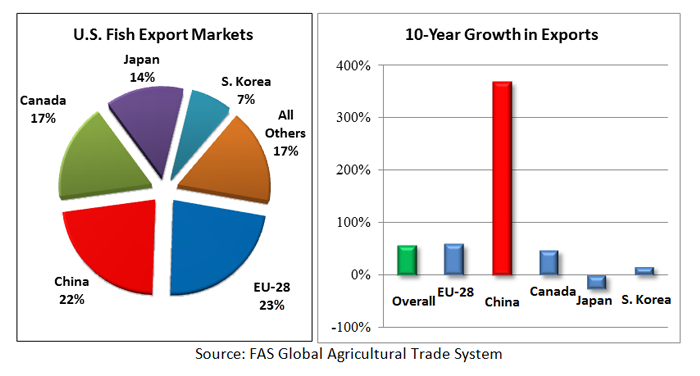 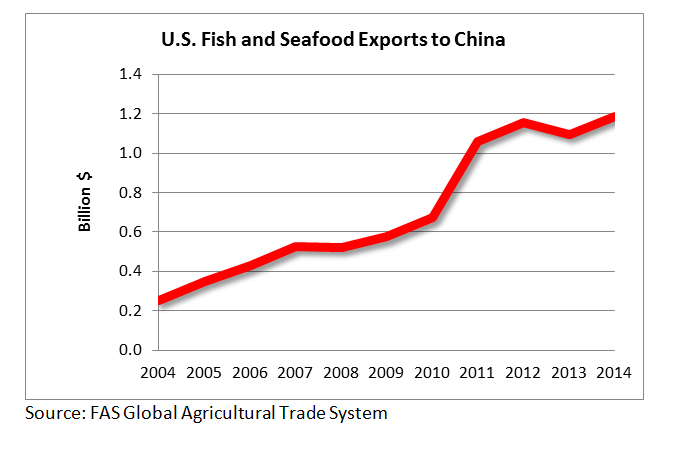