Faced with unprecedented foreign competition, a poor harvest, and strong domestic demand from the ethanol and feed industries, U.S. corn exports are forecast to fall to 22 million tons this year1. This is a decline of more than 23 million tons from just two years ago and marks the lowest U.S. export volume in 41 years. By contrast, combined shipments from Argentina, Brazil and the Ukraine are forecast at 58.5 million tons, up nearly 27 million tons from just two years ago. Though both U.S. market share and overall export volume have fallen over the past few years, exports are expected to at least partially rebound in 2013/14 assuming normal weather conditions.

Even as corn exports fall, shipments of products produced from corn have rapidly increased. Exports of meats, dairy products (cheese, non-fat dry milk, and whey), corn oil, corn syrup, distillers dried grains, and ethanol have increased from less than $2 billion in the 1990 calendar year to $13 billion in calendar 2012. On a volume basis, exports of these products (excluding ethanol) have doubled over the past five years, from 9 million tons to 18 million tons. 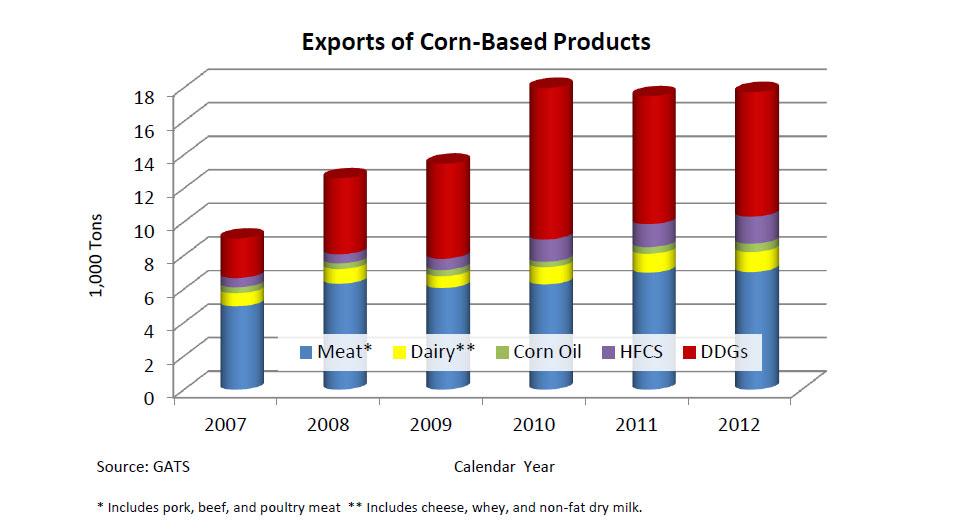 Level of Corn Used in Meat and Ethanol Exports Soars

While the chart above measures the export of products produced from corn, it is possible to measure the actual amount of corn used in the production and export of some key value-added products such as meats and ethanol. 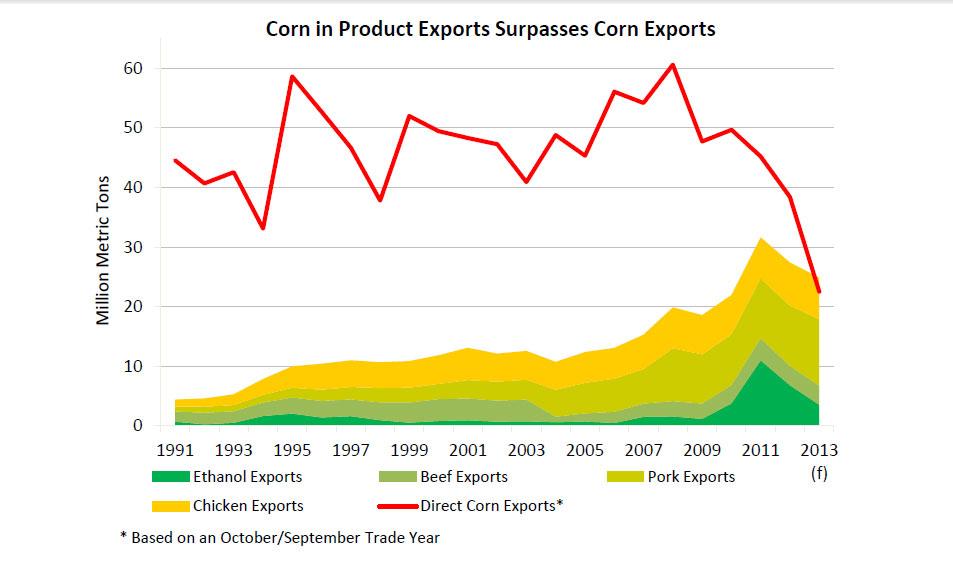 Global demand for U.S. meat continues to rise and according to recently released USDA baseline projections, beef, pork, and broiler exports are forecast to grow 1.2 million tons over the next decade. As a result, additional corn will be needed to produce this exported meat. Though no forecasts are available, increases in ethanol exports could further boost the overall level of value- added corn exports. Corn used in meat and ethanol exports now accounts for 10 percent of U.S. corn production, which is up from just three percent in 2004. As global demand grows for value-added corn products, particularly meats, an increasingly large portion of the U.S. crop could be exported in value-added form.

1 Unless otherwise specified, all data are presented on a October/September corn trade year basis
2 Converting meat exports into their corn equivalent is calculated through a series of conversions including estimating the live weight of animals from a given level of meat exports using dressing percentage (beef 62%, pork 72%, poultry 73%), calculating the amount of feed necessary to produce the live weight of animals using feed conversion factors (beef 7.4, pork 4.2, poultry 2.1), factoring the proportion of corn in feed rations (beef 60%, pork 78%, poultry 73%), and estimating the percentage of the lifetime gain of beef cattle in a feedlot (40%).
3 The amount of corn used to produce distillers dried grains (DDGs) exports is not included as valued-added exports since DDGs are a byproduct of the ethanol production process. The amount of corn used to produce of gallon of ethanol also produces DDGs. Therefore, including corn used in DDGs exports would be double counting.