Strong foreign demand and reduced competition have sharply boosted exports to record levels for U.S. corn in 2020/21 (Oct-Sep). For 2021/22, exports are currently forecast to decline with a rebound in supplies from other exporters. Still, this would be the third largest on record, if realized. Robust demand in China fueled U.S. sorghum exports to reach the third highest level in history in 2020/21. The trend is expected to continue into 2021/22.

New crop sales are a record for corn and the second largest for sorghum. Although strong early-season sales do not necessarily lead to greater total exports for the year, large early-season sales bode well for exports in the coming year.

Sharply lower second-crop corn supplies in Brazil and continued strong foreign demand have brightened U.S. export prospects for 2020/21 (Oct-Sep). Exports are currently forecast at 73.0 million tons (estimated value of $17.9 billion), which if realized, would be the largest in history. The previous record was 63.7 million tons, valued at $11.6 billion in 2017/18.

U.S. exports for the first 7 months (Oct 2020 -Apr 2021) have been robust due partly to reduced competition from Ukraine, a key supplier to Asia, North Africa, and the Middle East. Weekly inspections and sales data suggest that exports are likely to remain strong for the rest of the year. A smaller harvest in Argentina, combined with unfavorable weather in several second-crop corn producing states in Brazil, is expected to support U.S. exports during the second half (Apr-Sep) of 2020/21. 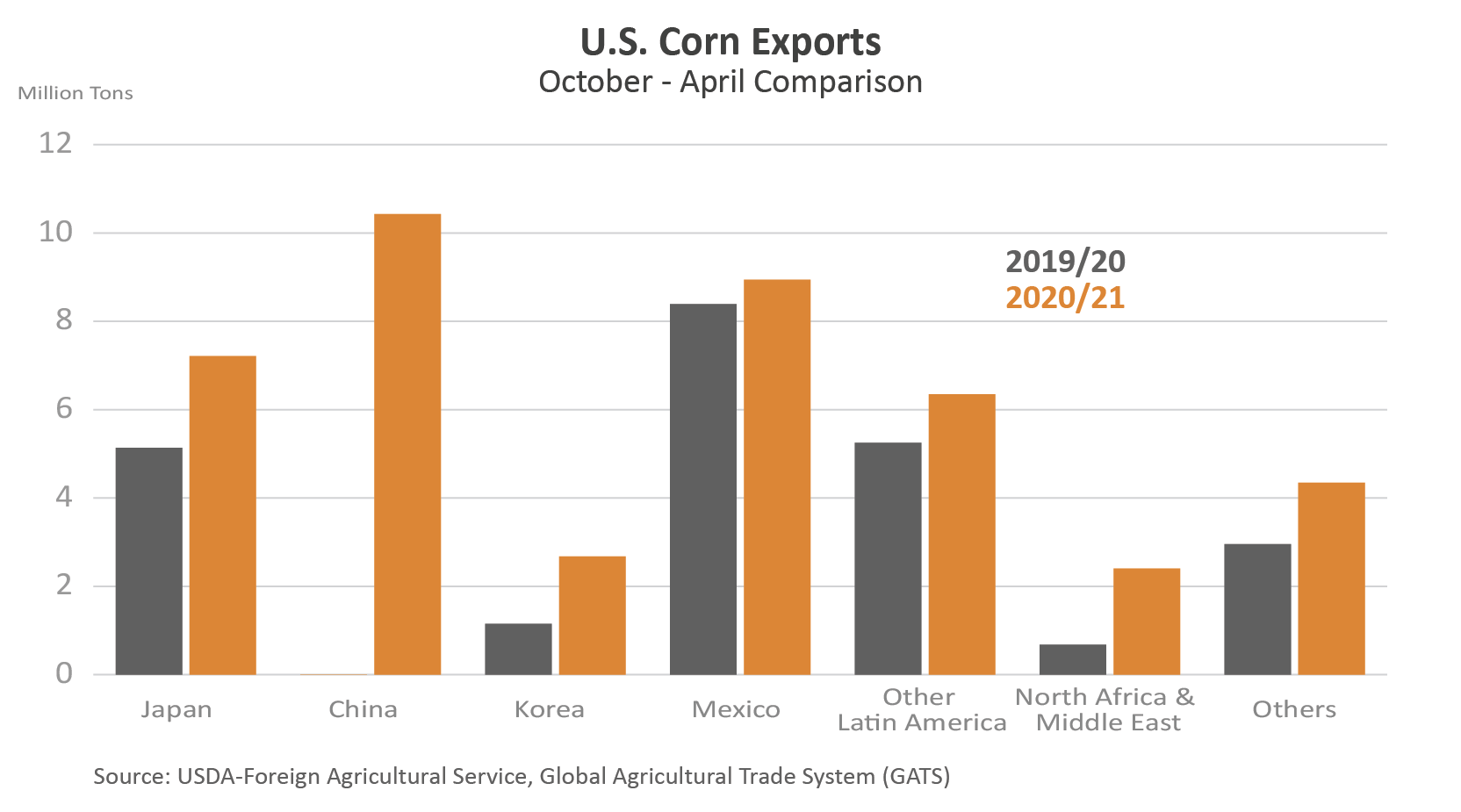 In addition, 2020/21 exports have benefitted from competitive prices relative to China’s domestic prices as well as strong feed demand in its swine sector. Increased commercialization of the swine herd has ostensibly improved demand for manufactured feeds. China’s domestic corn prices remain at record levels. Reported substantial releases of wheat and rice stocks from State reserves have had no apparent impact on domestic corn prices, presumably because of the poor quality for use in feed rations. 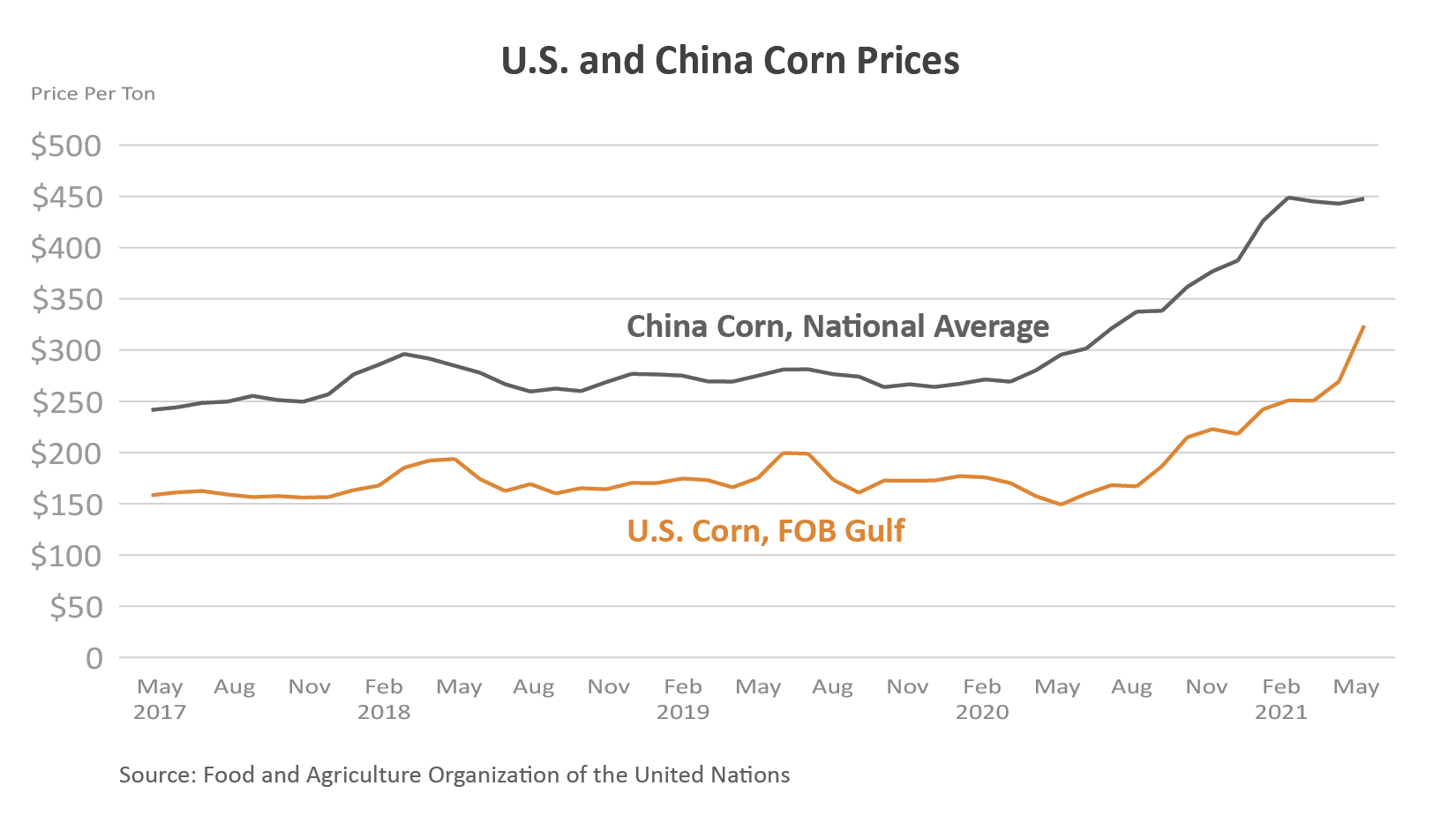 For 2021/22 (Oct-Sep), U.S. exports to the world are projected to decline from the current record to 62.0 million tons, due to higher competition from other exporters. Ukraine and Russia are projected to have a record and a near-record crop, respectively. These suppliers are expected to boost their exports in the first half of 2021/22, dampening the U.S. share of global trade. In addition, relatively high prices in local currencies are expected to support expansion in corn area in Argentina and Brazil during late 2021 and into early 2022.

U.S. exports to China for 2021/22, however, are expected to remain strong. In May, exporters have reported a flurry of new crop sales to China. It is unclear why China is making such large purchases before the crop is fully planted. It could be related to the sharp decline in new crop corn futures, in response to the World Agricultural Supply and Demand Estimates report published on May 12. In it, U.S. and world ending stocks were projected higher than anticipated by the market. USDA currently projects China’s corn imports at 26.0 million tons for 2021/22. 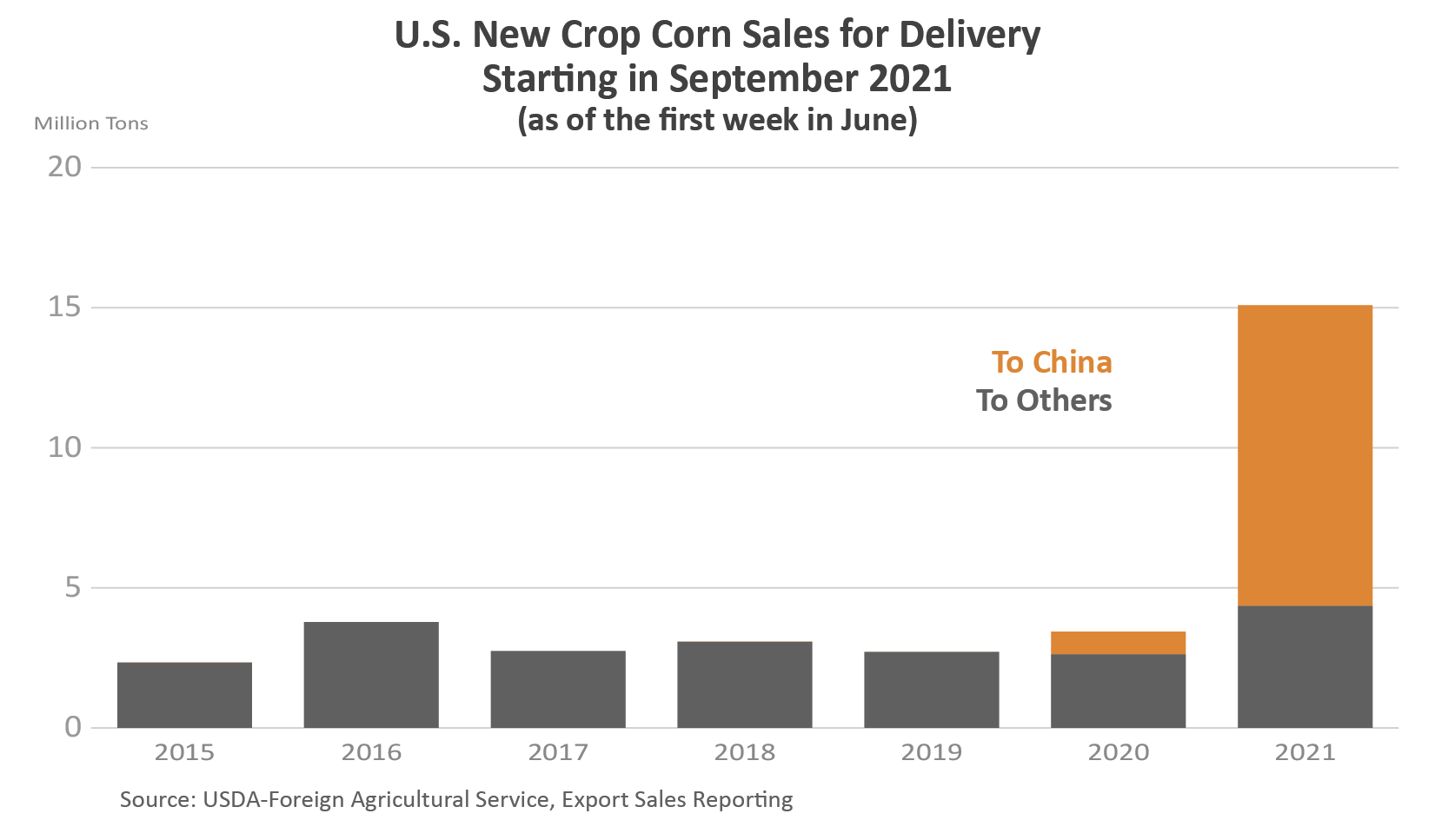 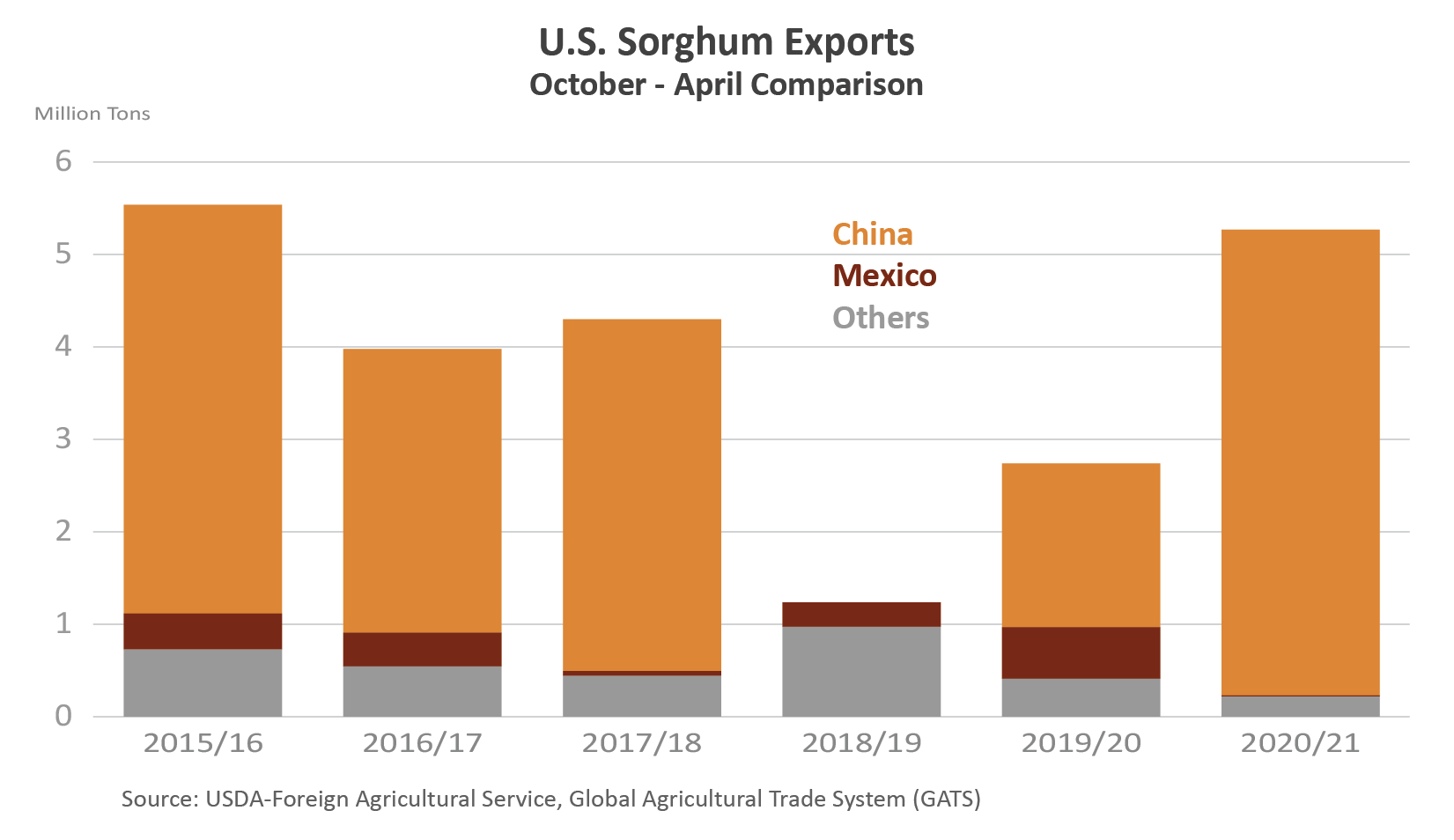 In China, imported sorghum has been commonly used as a substitute for corn in feed rations. Sorghum imports are not subject to the tariff-rate quota and currently face no technical restrictions that impede trade.  Moreover, importing sorghum is less burdensome administratively than importing corn. Most U.S. sorghum has been destined for southern China, where animal production is concentrated and demand for feedstuffs remains strong. 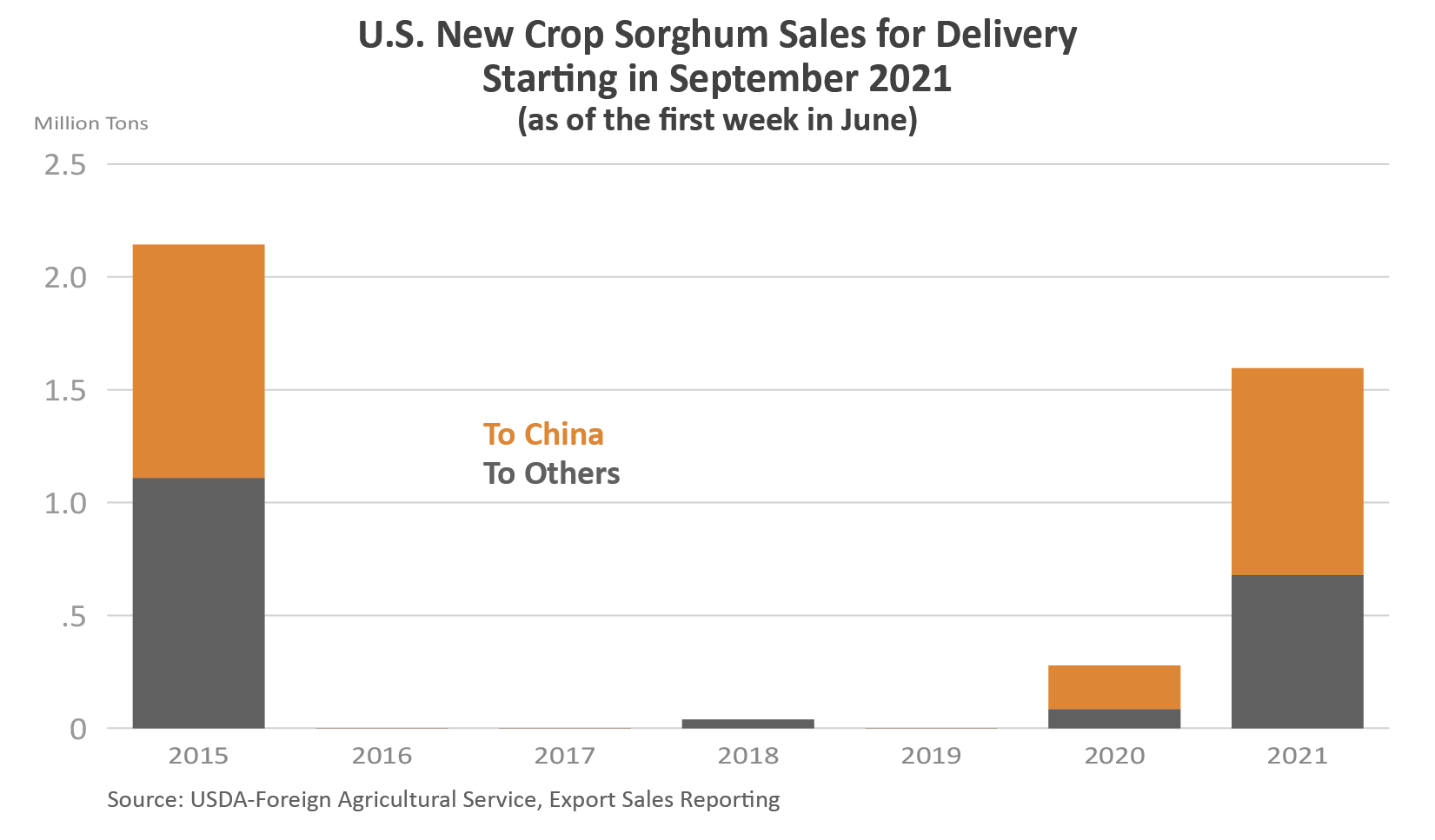 Even though Free on Board (FOB) Gulf prices have strengthened following the run-up in corn prices, U.S. sorghum continues to be price competitive in the Guangzhou area where domestic corn prices have been typically higher than the national average level.

U.S. sorghum production is currently projected at 10.8 million tons, of which 9.0 million tons are slated for exports for 2021/22. If realized, exports would be the largest level since 2014/15. There are already 1.6 million tons of new crop sales on the books, of which more than half is slated to China.